A NASA experiment could inform mitigation of health-threatening urban heat worsened by climate change. Readings just after sunrise showed areas in central Houston and near roadways were far warmer than the city’s outskirts. 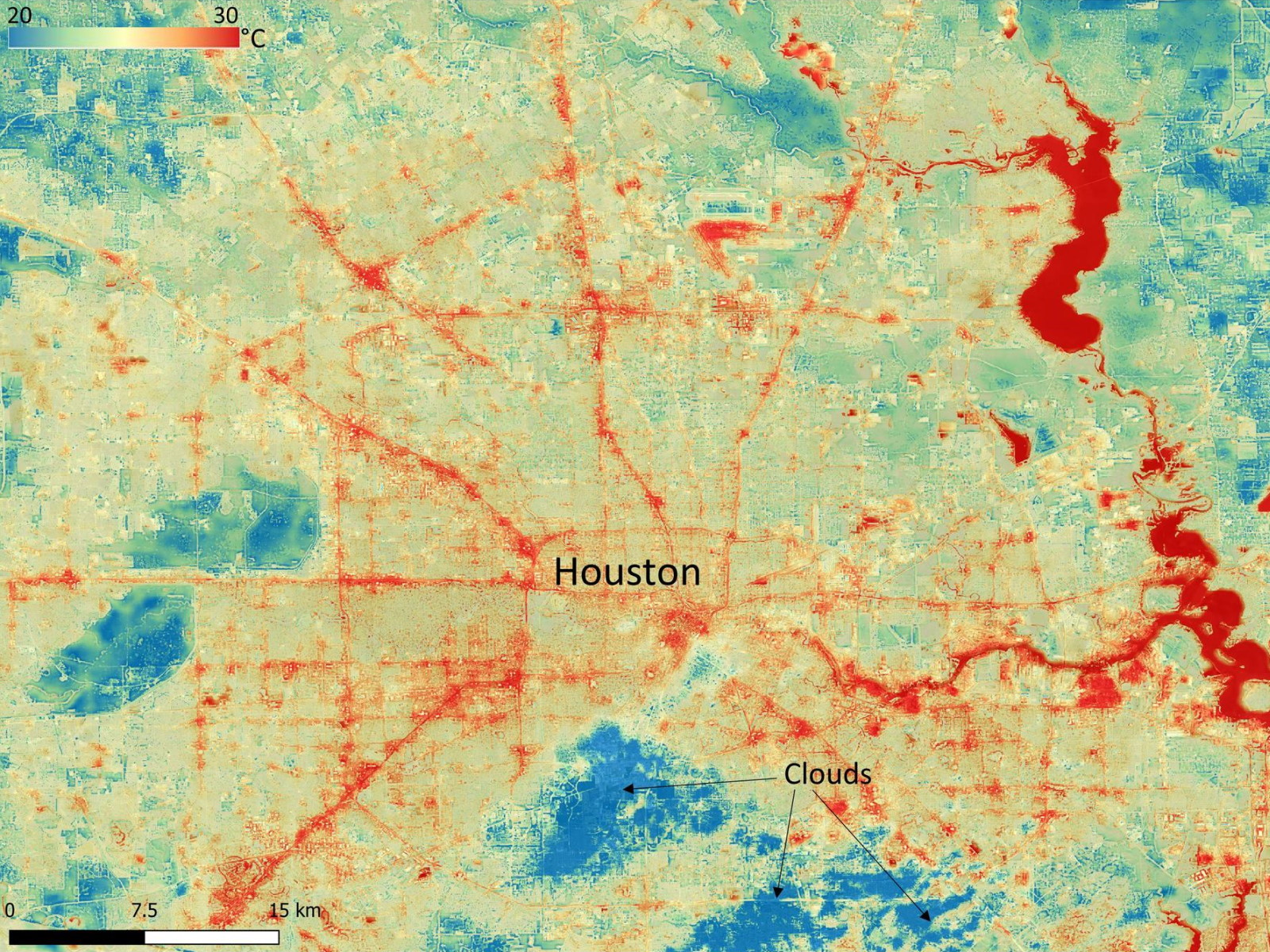 This ECOSTRESS image shows ground surface temperatures in the Houston area on June 20, 2022, at 6:29 a.m. Central Daylight Time. Warmer, manmade urban surfaces near the city center and roads and highways appear red and orange. Clouds, which are cool compared with the ground, are shown in blue and labeled in the image. NASA/JPL

Unprecedented heat waves have battered Texas along with other parts of the United States and a swath of Europe this summer. Both daily maximum (daytime) and minimum (nighttime) temperatures are up about 1.5 to 2 degrees Fahrenheit from 20th century averages across Texas, according to the state climatologist, John Nielsen-Gammon.

“This is a long-term trend, and this summer is already hotter than that,” he said. “We have set hottest daily minimum records across the state, as well as daily maximum temperature records.”

According to the research organization Climate Central, average summer nights have warmed across the contiguous U.S. by 2.5 degrees F since 1970, with 40% of 246 U.S. locations analyzed by the group seeing average summer nights warmer by at least 3 degrees F. In July, temperatures in the U.K. topped 104 degrees F, the highest temperature recorded there ever. Extreme temperatures also broke heat records in Spain, Portugal, France, Germany, and other countries across Europe, where the vast majority of homes do not have air conditioning.

This kind of heat is miserable, of course. It also can be deadly.

According to urban heat expert Anamika Shreevastava, a NASA postdoctoral program fellow at the agency’s Jet Propulsion Laboratory (JPL) in California, extreme temperatures are expected to be the number one weather-related killer in the U.S., especially in urban areas, due to urban heat island effect.

Urban heat islands occur when natural land cover, such as vegetation, is replaced with dense concentrations of pavement, buildings, and other surfaces that absorb and retain heat. This can make urban areas typically 10 to 12 degrees hotter than surrounding land, she says.

The effects of this heat are compounded when temperatures do not drop sufficiently at night. Climate Central reports that U.S. summer minimum or nighttime temperatures have warmed nearly twice as fast as summer maximum temperatures.

“Our body needs an opportunity to cool down and recover from extreme heat, and when the nights are warm as well and people don’t have access to air conditioning, that puts prolonged stress on the body,” says Nielsen-Gammon.

He notes that the risk is especially acute for the elderly. Health researchers also have linked higher nighttime temperatures to a higher risk of death for vulnerable individuals with conditions such as heart disease.

People living in disadvantaged neighborhoods face greater risk, as these areas tend to have fewer homes with air conditioning and less tree canopy to provide shade, and because many residents lack cars and must walk on hot pavement to access work and conduct essential activities such as buying groceries.

The Ecosystem Spaceborne Thermal Radiometer Experiment on Space Station, or ECOSTRESS, could help cities identify literal hot spots and target their efforts to deal with the extreme heat. The instrument on the International Space Station was designed by JPL to record ground surface temperatures and identify thresholds for water use and water stress in plants. It also can document patterns of heat absorption and retention by surfaces on the ground.

Ground temperatures run hotter than air temperatures during the daytime, and streets often are the hottest places because of dark asphalt paving – dark-colored surfaces absorb more heat from the sun than lighter-colored ones. Asphalt absorbs up to 95% of solar radiation and retains that heat for hours after sunset.

ECOSTRESS produces high-resolution thermal infrared data in at least three spectral bands, creating images that provide a high level of detail, says Shreevastava. “It can actually discern between road temperature versus adjacent parkland temperature and show features such as parking lots and green areas. You can clearly see how roads show up as much hotter.”

The ECOSTRESS instrument took an image of ground surface temperatures in the Houston area as the space station passed overhead on June 20, 2022, at 6:29 a.m. Central Daylight Time. Even just after sunrise, manmade urban surfaces near the city center and streets, roads, and highways were warmer than the outskirts by up to 18 degrees F (10 degrees Celsius), showing as red and orange in the image.

The images produced by ECOSTRESS are publicly available, and at least one city, Las Vegas, already has used them in its efforts to combat the heat. The city painted a black asphalt street a lighter color and used the images to verify that the coating lowered the temperature of the street. These images could help inform efforts under way in several Texas cities to identify specific spots most affected by heat island effect.

This tool becomes available none too soon. Researchers examined trends in heat exposure for more than 13,000 cities from 1983 to 2016 and found a nearly 200% increase in overall urban heat exposure for some 1.7 billion people, or about a quarter of the world’s population.

In the human body, heat can cause dehydration, which thickens the blood and makes the heart work harder, potentially causing damage to it and other organs. Those with health complications such as heart disease face greater risk. High levels of heat and humidity disrupt sweating, the body’s natural cooling system, which can lead to heat exhaustion and heat stroke.

In theory, even a healthy, well-hydrated person sitting in the shade could succumb when a measurement called wet-bulb temperature, which factors in air temperature and humidity, reaches 35 degrees Celsius (95 degrees Fahrenheit).

“Texas is no stranger to heat, but this heat is a whole other thing,” Shreevastava says. Given that, cities in Texas need to use every tool available to protect residents from its effects, perhaps including images taken from space.

2020 basically tied with 2016 as Earth’s hottest year on record. Troubling implications for people’s health were evident in Texas and many other places. More research underscored health concerns about the climate crisis.

Those hot summer nights are getting hotter as climate change progresses June 21, 2019

“High lows” – increasing overnight minimum temperatures – are happening in Texas, throughout the U.S. and around the world. Warmer weather at night can pose significant health risks, scientists say.

Vegetation-covered roofs may be challenging to create and maintain, but they can be up to 40 degrees cooler than conventional roofs. They can also reduce flash flooding and provide islands of habitat for pollinators.

John Nielsen-Gammon is a member of Texas Climate News’ Advisory Board, serving in his role as regents professor of atmospheric sciences at Texas A&M University. Volunteer members of the Advisory Board have no authority over our editorial decisions.