2020 basically tied with 2016 as Earth's hottest year on record. Troubling implications for people's health were evident in Texas and many other places. More research underscored health concerns about the climate crisis. 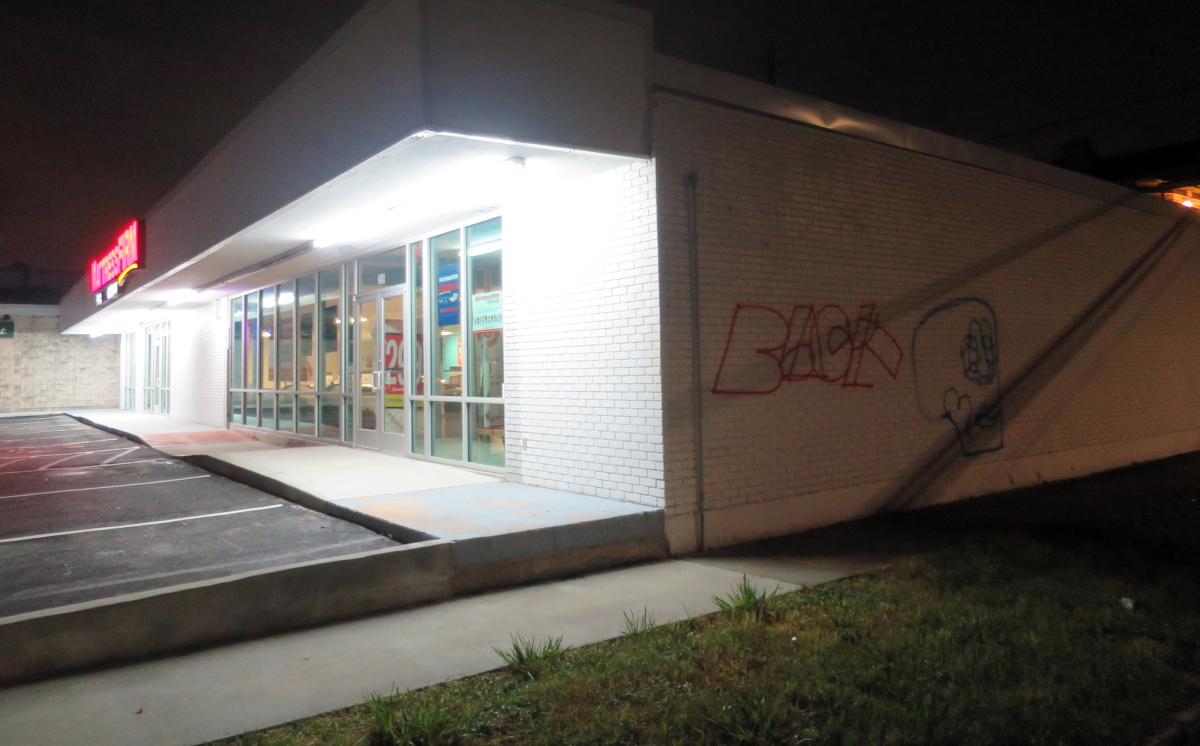 A nighttime street scene in sultry Houston, August 2016. It was a month when overnight temperatures often stayed between the upper 70s and low 80s and high humidity added to the general unpleasantness and yielded potentially dangerous heat-index readings. Daniel Lobo via flickr

Last year essentially tied with 2016 as the earth’s hottest since record-keeping started in the late 19th century.

NASA’s scientists concluded that 2020 was less than .01 degree Celsius warmer than 2016, which manmade global warming combined with an El Niño, a natural weather cycle, to make the previous warmest year on record. Three other teams of scientists – at the National Oceanic and Atmospheric Administration, the U.K.’s Met Office and Berkeley Earth – concluded that 2020 was .01 to .02 degrees C cooler than 2016.

In any event, nothing in last year’s planetary weather record prompted climate scientists to question their conclusion that pollution is heating the earth’s atmosphere with increasingly troubling effects. They included the setting of new local temperature records in many places, dangerous wildfires ranging from the Siberia to the Amazon to Australia to western North America and new evidence documenting worrisome changes in the polar regions.

On the one hand, this is dog bites man stuff – completely unsurprising. Temperatures are warming and that will continue, and in such a world every year will be among the hottest. On the other hand, it is somewhat shocking to me how fast the warming seems to be proceeding. Just a few years after we had a record during a huge El Niño (2016), we’ve tied that record with no El Niño. 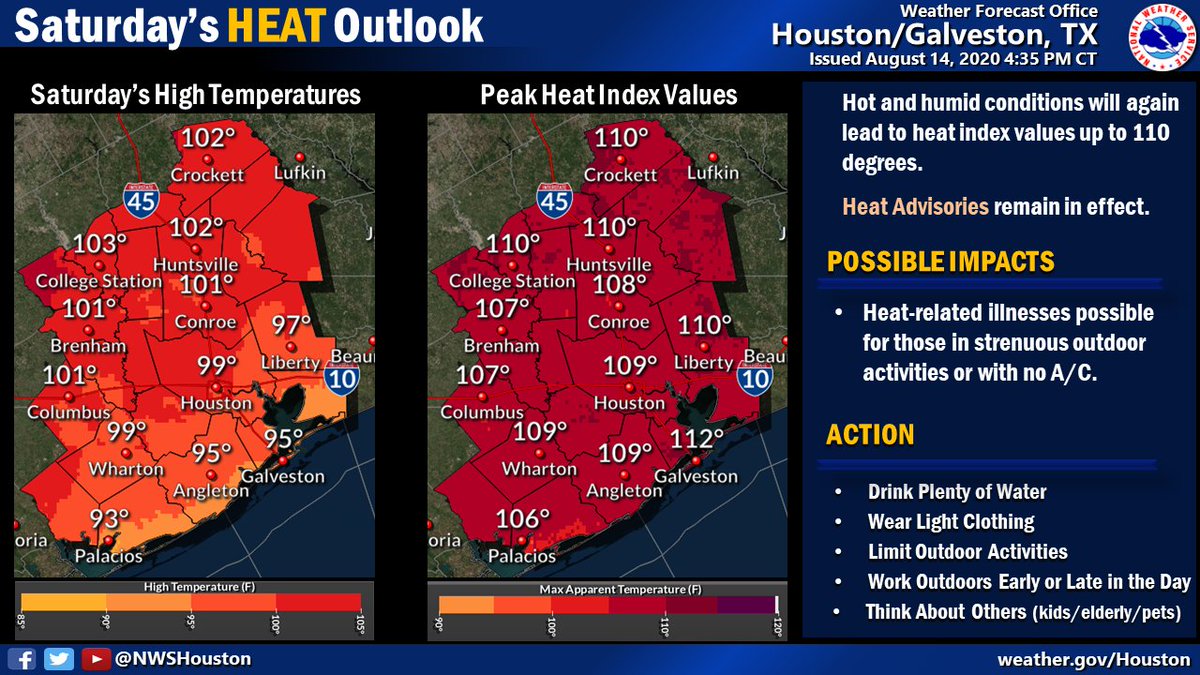 With 2020 neck and neck with 2016 as the hottest on record, the past seven years now rank as the seven hottest, with the 10 hottest occurring since 2005. Rank is assigned according to the global average temperature, which is compiled from thousands of local surface temperatures around the world.

The Houston-Galveston area was one place that set dozens of new high-temperature records last year, particularly in the category known as “high lows” – the highest overnight minimum temperatures ever recorded. That continued a Houston-region trend toward warmer overnight temperatures that TCN has reported on previously. Rising overnight temperatures, though they get less attention than things like scorching afternoon highs and more damaging droughts and hurricanes, are another manifestation of global warming that also increasingly concerns public health experts.

The National Weather Service reported that one of its four stations in the Houston-Galveston region, at Hobby Airport, registered its warmest year on record in 2020. Two of the stations, at Houston’s Bush Intercontinental Airport and Galveston, had their second-warmest years. And the monitoring site at College Station recorded its fifth-warmest year. 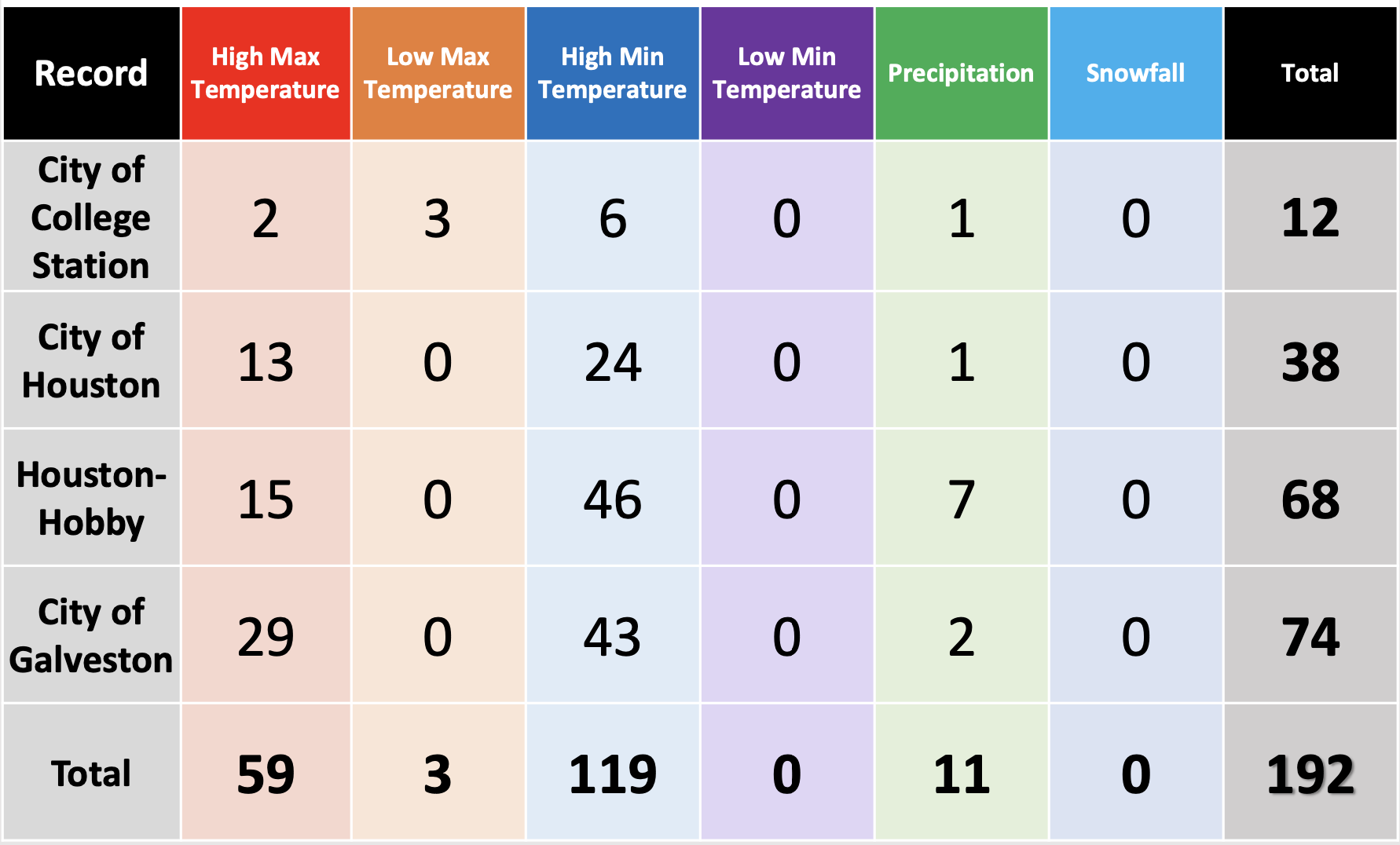 The exceptional warmth was largely an overnight phenomenon. All together, the four sites set 181 new high-temperature records for different days in 2020. By far the greatest number of those records, which were set on 119 days at one or more sites, marked those locations’ highest overnight minimum temperatures – the highest lows ever recorded there.

The 2020 readings are part of an already noted trend. The Texas state climatologist, John Nielsen-Gammon of Texas A&M, told TCN in 2019 that “high lows are increasing in frequency in the Houston area,” evident in decades of temperature data from both Houston and Galveston.

Climate scientists have observed that an important feature of the worldwide progression toward a warmer overall atmosphere is that overnight low temperatures are rising faster than daytime highs at many locations.

For those with air-conditioned homes – most people in the Houston area and across Texas – this is not as concerning a public-health issue as at other locations that are less AC-equipped. At some such places, including London, health researchers have linked higher nighttime temperatures to a higher risk of death for vulnerable individuals with conditions including heart disease.

Increasing daytime temperatures, of course, are also being linked by scientists to a variety of harmful health effects and are being studied for their dangerous potential in coming years. Relevant research last year included these findings: