Vegetation-covered roofs may be challenging to create and maintain, but they can be up to 40 degrees cooler than conventional roofs. They can also reduce flash flooding and provide islands of habitat for pollinators. 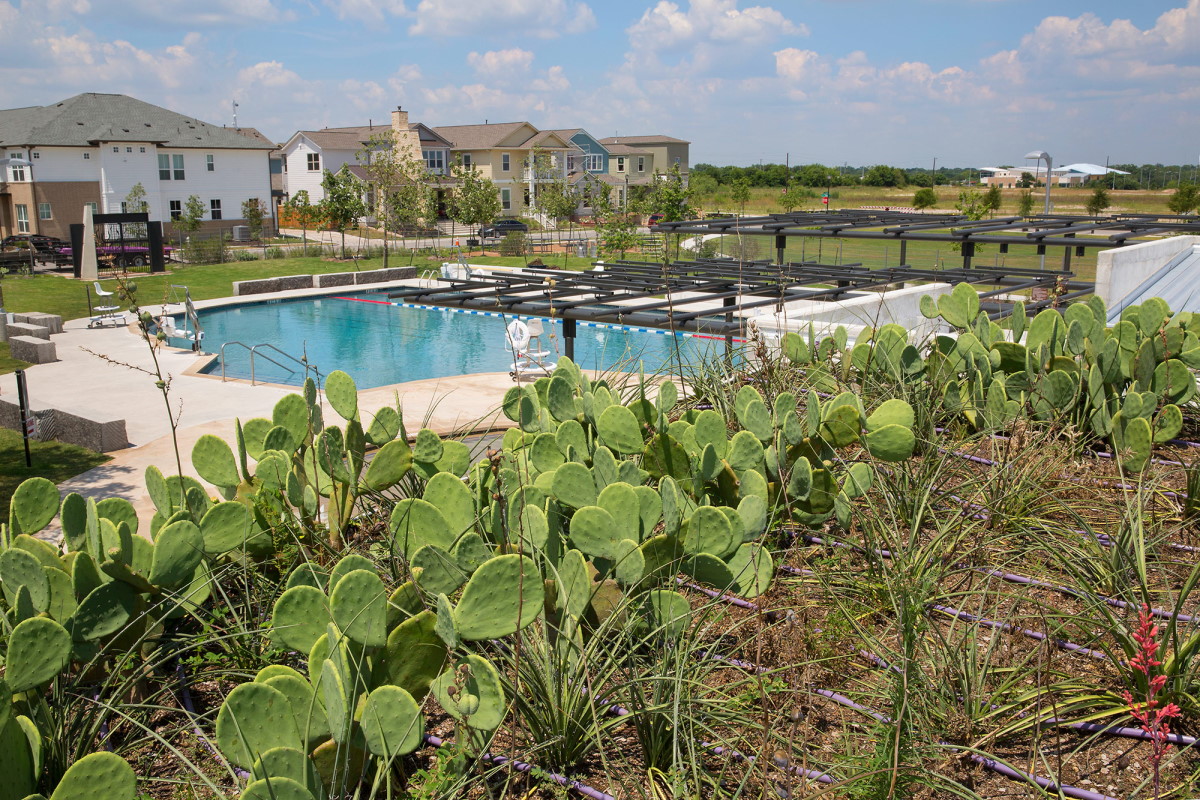 The staff of the University of Texas Lady Bird Johnson Wildflower Center designed this green roof, which sits atop a pool house at Austin’s mixed-use Mueller development. Plants on the roof include succulents – prickly pear, red yucca and manfreda among them – plus native Texas wildflowers including bluebonnets. This image is used here courtesy of the photographer, John W. Clark.

Heat kills. In the U.S. it accounts for more than 600 deaths each year. More than a third of heat-related deaths in the 15-year period ending in 2018 occurred in Arizona, California and Texas.

A 2020 study suggests that by the end of the century heat exposure may lead to approximately 50,000 premature deaths annually in a “moderate” climate-warming scenario.*

The problem can be especially acute in urban areas. Thanks to hard surfaces such as pavement and heat generated by human activity, cities typically are a few degrees warmer than surrounding rural areas, and they cool down less at night. Heat waves, projected to grow in intensity, frequency and duration, will disproportionately affect urban areas. Cooling off our cities is literally a matter of life and death.

One way to help do so is using white building roofs, which have increased reflectivity, or green roofs, which are covered in vegetation.

A recent study used historic Landsat 5 satellite imagery to evaluate the cooling effects of green roofs. The researchers analyzed sites in Chicago, but their method can be used elsewhere.

The study looked at temperatures before and after installation of a green roof on a site and compared green roofs with nearby conventional roofs, explains study co-author Kathryn McConnell, a PhD student at Yale University. “That accounts for much larger changes taking place across the city. We saw a warming trend within the city in the data and can identify the effect of green roofs against that backdrop.”

A joint NASA and U.S. Geological Survey project, Landsat is a series of Earth Observation satellites that have continuously collected images of Earth’s land surface since 1972. These data are free and available to the public, so other cities could use it make similar comparisons, McConnell adds. Landsat instruments include a thermal infrared sensor that measures emitted heat.

According to the Environmental Protection Agency, green roofs can reduce citywide ambient temperatures by up to 5 degrees F. The EPA also reports that temperatures on green roofs can be 30 to 40 degrees lower than those of conventional roofs, cooling the buildings on which they are installed and reducing air conditioning costs. The study notes that such savings are affected by the building’s use; refrigeration for perishable foods, for example, would generate significant waste heat.

Green roofs have a variety of other benefits as well. They slow down rainwater runoff, which can reduce flash flooding. A green roof on the headquarters of the American Society of Landscape Architects in Washington, D.C., prevented 27,500 gallons of stormwater – nearly 78 percent of all precipitation hitting the roof – from flowing into the city’s stormwater system during one 10-month period.

The vegetation on green roofs sequesters carbon, filters particulate matter out of polluted city air, and generates oxygen. According to the U.S. General Services Administration, green roofs are expected to last twice as long as conventional ones.

A green roof also can provide islands of habitat, including for pollinators, according to Michelle Bertelsen, an ecologist at the Lady Bird Johnson Wildflower Center in Austin. This and other benefits depend on the design of a green roof and how it is planted, she stresses. Green roofs are not without their challenges, either.

“Texas presents a tough environment for green roofs,” Bertelsen says. For example, succulent species need cool nights to complete photosynthesis and may struggle in areas such as Central Texas that have high nighttime temperatures in summer. Green roofs must use shallow growth media to keep weight down, which limits use of some species, including drought-tolerant plants that rely on deep roots. Long periods of high heat and no rain can stress almost any kind of vegetation.

Experts are finding ways to address these challenges, though.

“By looking to similar conditions in nature, we can find communities of species that can handle these conditions,” Bertelsen says. “Many prairie species that like deep soil can live in shallow, exposed conditions. Many are adapted to summer dormancy when there is no rain and revive when it returns. The key is to think in terms of plant communities, not individual species.”

The Chicago research backs that up, showing that “intensive” green roofs – those with a greater variety of plants, including shrubs and trees – have greater cooling benefits than “extensive” ones – those with a single type of plant. Extensive green roofs have a thin layer of growing media (less than 8 inches), which makes them more subject to high winds, high thermal loads and varying humidity. Intensive green roofs have growth media up to 3 feet deep, which requires more irrigation and maintenance, as well as a structure that can support up to 150 pounds per square foot. 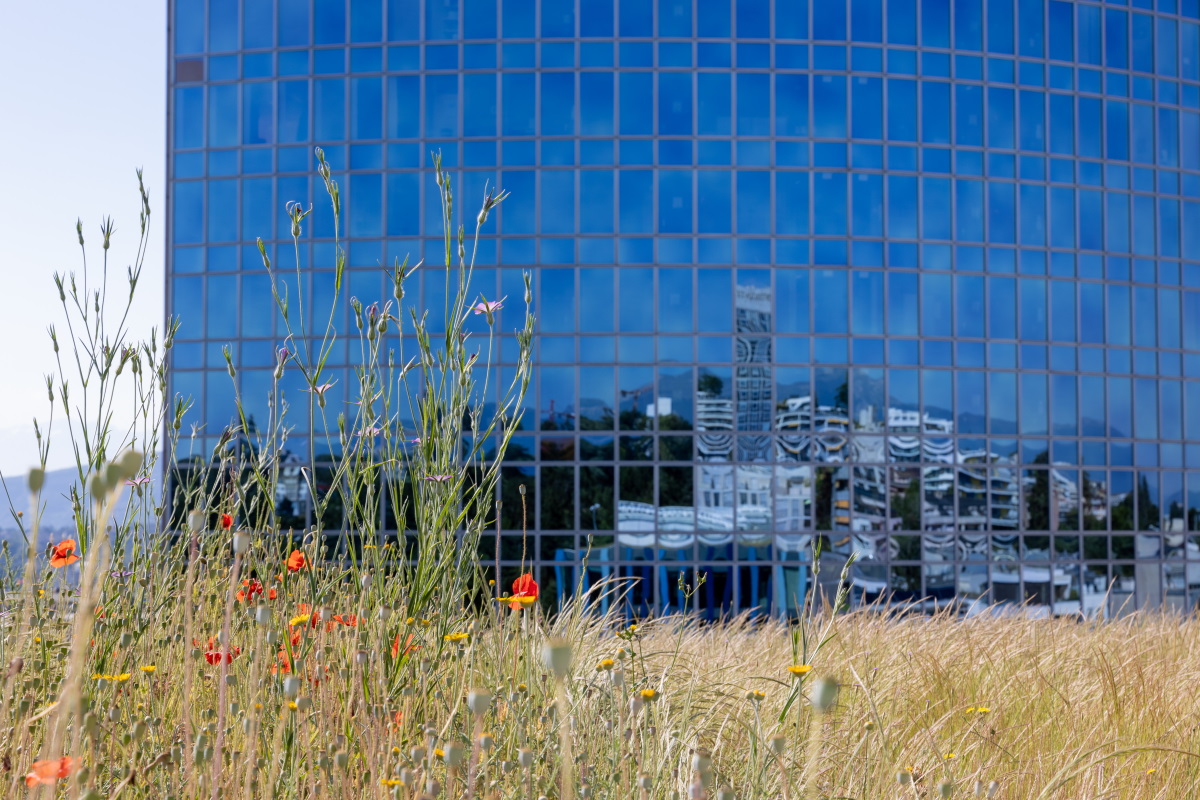 A green roof at the World Intellectual Property Organization in Geneva, Switzerland. Three buildings on the WIPO campus are covered by 22,600 square feet of “living rooftops.” The organization says they provide habitats for 40 varieties of flowering plants and grasses, plus assorted insects. “In addition to supporting biodiversity, this green space improves rooftop thermal insulation, reduces ambient temperature, and allows for better drainage.” WIPO / Emmanuel Berrod, CC BY-NC-ND 3.0 IGO, via flickr

Two plant communities that have worked well in Texas, according to the Wildflower Center, are an herbaceous prairie mix and a succulent-and-annual-wildflower mix. Selecting plants native to the area is important. The Wildflower Center also developed its own planting medium, called SkySystem, designed specifically for hot climates.

Most green roofs, regardless of the media or type of plants, will require some watering and weeding, at least periodically.

The Chicago analysis showed that larger green roofs provided greater cooling benefits. Yet many of the projects in Texas so far are small: a kayak rental kiosk in The Woodlands near Houston, the admissions kiosk at the Wildflower Center, a pool house in Austin’s Mueller development.

One way to encourage larger projects, McConnell suggests, is to focus city ordinances and policies on the types of companies and organizations that have large roofs.

Another option is making large roofs white rather than green. Research has shown that reflective white roofs reduce heat, in some cases more than green ones. Increasing the reflectiveness of urban surfaces in general, including pavement, helps remove solar radiation that otherwise would be converted into heat.

Reflective roofs do not provide benefits such as absorbing storm water and providing habitat and public spaces, however. Decision makers also need to take into account other factors, such as whether a roof, white or green, sits on a building that removed existing vegetation and increased impermeable cover.

Increasing heat waves may provide some motivation as well.

*The study authors also projected approximately 110,000 premature deaths annually in a high warming scenario. In a major new report issued this month, the Intergovernmental Panel on Climate Change said that scenario no longer represents a “business-as-usual” expectation, because “the rapid development of renewable energy technologies and emerging climate policy” have made it “considerably less likely.”