The magnetic pull of electric vehicles is slowly drawing Texas in

As consumer interest in EVs grows, government officials at all levels in Texas are working to decide how to add infrastructure to support more EV ownership in the state, a transportation researcher at Texas A&M said. 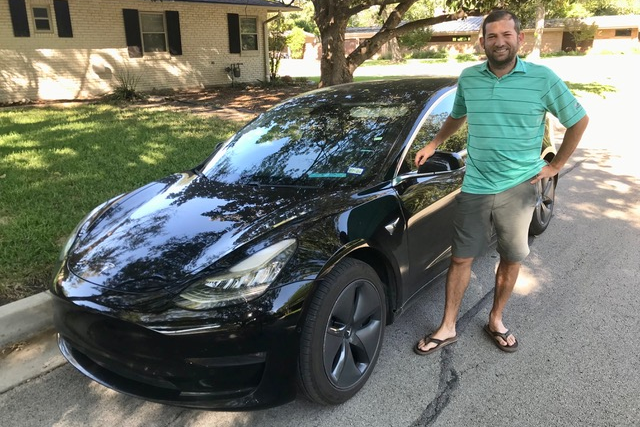 Chase Akin of Fort Worth has owned his EV for three years and hopes one day to replace the family’s gas-powered minivan with an electric one. John Kent/Texas Climate News

With transportation comprising the United States’ single largest source of human-caused greenhouse-gas emissions, and one of the largest worldwide, shrinking the world’s fleet of fossil-fueled vehicles is widely viewed as low-hanging fruit that’s ready for picking in the fight against climate change. To that end – and for other reasons ranging from low operating costs to driving excitement — electric-vehicle sales are surging globally, including in the Texas oil patch.

In 2019, Chase Akin of Fort Worth bought a new, all-electric Tesla Model 3 sedan mainly for its Autopilot suite of electronic driver-assistance aids. He envisioned the system protecting him from distractions and ultimately doing some of the driving while he caught up on emails and other work during a long commute. The system indeed boasts some high-tech features that Akin has found useful – automated steering, lane changing and parking, to name a few – but in general it has evolved more slowly than he and many Tesla owners had anticipated.

But something happened as Akin waited for the technology to mature – the car’s other charms began to work their magic. “Now, the reasons I’m glad I bought the car have significantly more to do with the EV side,” Akin said. “It’s such an easy car. Maintaining an electric vehicle is significantly easier. Long-term expenses are better, it’s good for the environment.”

And the EV’s raw performance has been an eye-opener. “You know, it’s like, oh, I can just press on the gas and go whatever speed I want. EVs in general are just fast. And gas cars – well, there’s that lag,” said Akin, whose Tesla replaced a well-worn Lexus ES 300.

Akin is among a fast-growing legion of Texas drivers transitioning to battery-electric vehicles. The number of EVs registered in the state grew by 55% from 2020 to 2021, with 81,000 EVs plying the Lone Star State’s roadways by the end of last year. (Globally, EV sales doubled over the same period.) In terms of absolute EV numbers by state, Texas is near the top, trailing only California (563,000) and Florida (96,000).

Viewed in terms of per-capita uptake, however, Texas’ numbers look rather wimpy – only about one in 370 Texans was driving an EV as 2022 dawned. That ratio might be tighter if not for supply constraints.

EVs like the Cadillac Lyriq, Ford Mustang Mach-E and Volkswagen ID.4 SUVs and the Ford F-150 Lightning pickup already are sold out for the model year, the Chevrolet Bolt EV and EUV are in such demand that production is being nearly doubled, and the clamor for Teslas has put that brand’s more popular models on chronic back-order. Making matters worse for EV-hungry Texans, all 2,000 EV-rebate applications for the state’s Light-Duty Motor Vehicle Purchase or Lease Incentive Program have been spoken for until the next legislative funding period.

Nevertheless, sales trends show a clear move toward EVs and away from gas-powered vehicles. In the second quarter of 2022, EV sales were up 66% year-over-year nationwide, even though the overall automotive market was down 20%. According to a survey cited in the November 2022 issue of Consumer Reports, the percentage of Americans who say they are “definitely” planning to buy an EV has more than tripled since 2020.

For its part, the Texas Legislature has continued its enthusiastic support of the state’s oil and gas industry and assiduously avoids acting upon virtually any measure that mentions the word “climate” – a pattern that has persisted for years. But it has notably left the door cracked open for electric vehicles to squeak through, evidenced both by its funding of EV rebates and its pursuit of EV-centric businesses like Giga Texas, Tesla’s enormous Austin manufacturing plant.

Ben Ettelman of Texas A&M University’s Texas Transportation Institute notes that, far from ignoring battery-powered cars, the state government is actively engaged in preparing for a future wherein EVs overtake the market and the roadways.

“From our perspective, federal, state, regional and local governments are working closely to determine how to implement infrastructure to support increased EV ownership in the state of Texas,” said Ettelman, an associate research scientist and manager of TTI’s Health and Sustainability Program.

As those efforts proceed and consumer interest in EVs continues to grow in Texas, market forces outside the state are exerting increasing pressure within its borders. California recently moved to phase in a ban on the sale of new gasoline-powered cars by 2035 – a lead that a number of other states are expected to follow under federal authority to adopt California’s emission rules. Those moves to hasten the adoption of EVs have opposition – Republican attorneys general in Texas and 16 other states are suing to block the California ban.

Whether or not the Republican-launched litigation succeeds, however, most major automakers have now pledged publicly to end production or development of most or all fossil-fuel vehicles before or during the next decade. Many governments around the world, meanwhile, already have passed laws forbidding or restricting the sale of such vehicles as soon as 2030, all but ensuring a steep decline in worldwide demand for internal-combustion vehicles.

Here in the U.S., the newly enacted Inflation Reduction Act includes extending tax credits of up to $7,500 for the purchase of new, domestically produced EVs, and a maximum $4,000 tax credit (or 30% of the sales price, whichever is lower) for used EVs that are at least two years old and priced below $25,000. Those incentives take effect in 2023. The act also underwrites the construction of a nationwide network of EV chargers.

Texas is moving ahead with its own plan to install hundreds of EV charging locations across the state, using up to $408 million in funding from the recently enacted federal Bipartisan Infrastructure Law. Ettelman, the TTI research scientist, believes a confluence of circumstances will lead to a steady increase in the number of EVs on Texas roadways:

“The two most prominent factors that we see impacting EV ownership are, one, the increase in the number of EVs being produced by vehicle manufacturers – especially legacy [automakers] – and, two, the influx of funding being provided through the federal government through policies like the Infrastructure Investment and Jobs Act to significantly expand charging infrastructure.”

Reasonably priced used EVs also have begun percolating into the market, drawing buyers who might not be able to afford a new one. Among the nation’s used-EV markets, Texas is second in size only to California.

“Whereas EVs were considered a luxury item in the not-so-distant past, the availability of moderately priced EVs and EVs entering the resale market, coupled with accessible charging infrastructure, should increase the rate of adoption in Texas,” Ettelman said.

EVs are still more expensive to buy than fossil-fuel cars despite EVs’ significantly lower operating costs, and price is likely to affect the rate at which Texans make the switch from their internal-combustion vehicles.

“If we continue to see EV manufacturers introduce moderately priced EVs to the market and charging infrastructure is accessible and affordable, EV ownership will more than likely rise,” Ettelman said. “Conversely, if manufacturers determine that moderately priced EVs don’t align with their business models and/or charging infrastructure is difficult to access or increasingly expensive, EV ownership will likely stagnate.”

Akin, the Fort Worth Tesla owner, says he and his wife Hannah would “love to have two electric cars” once an EV with the people-moving capability of their minivan comes along. With four small children and all their stuff to cart around, the Akins have their eyes on the forthcoming Volkswagen ID.Buzz, a battery-powered van with styling cues reminiscent of the iconic VW Microbus.

Akin hopes never to buy another gas-powered vehicle, but concedes that, given the current state of EV technology, a traditional pickup probably would work best for his vision of one day towing an RV on family outings.

“It’s not really who I am right now, so that’s only if I become that guy. I hope not to, though,” Akin said. “You know, I don’t want my kids to ever have to learn how to drive. So, I hope that Autopilot picks up soon. I don’t want them to put gas in the car or learn how to change their oil. I don’t think those things are going to be necessary in 10 years.”

John Kent is a Fort Worth-based writer specializing in transportation and environmental topics. He is a contributing editor of Texas Climate News.