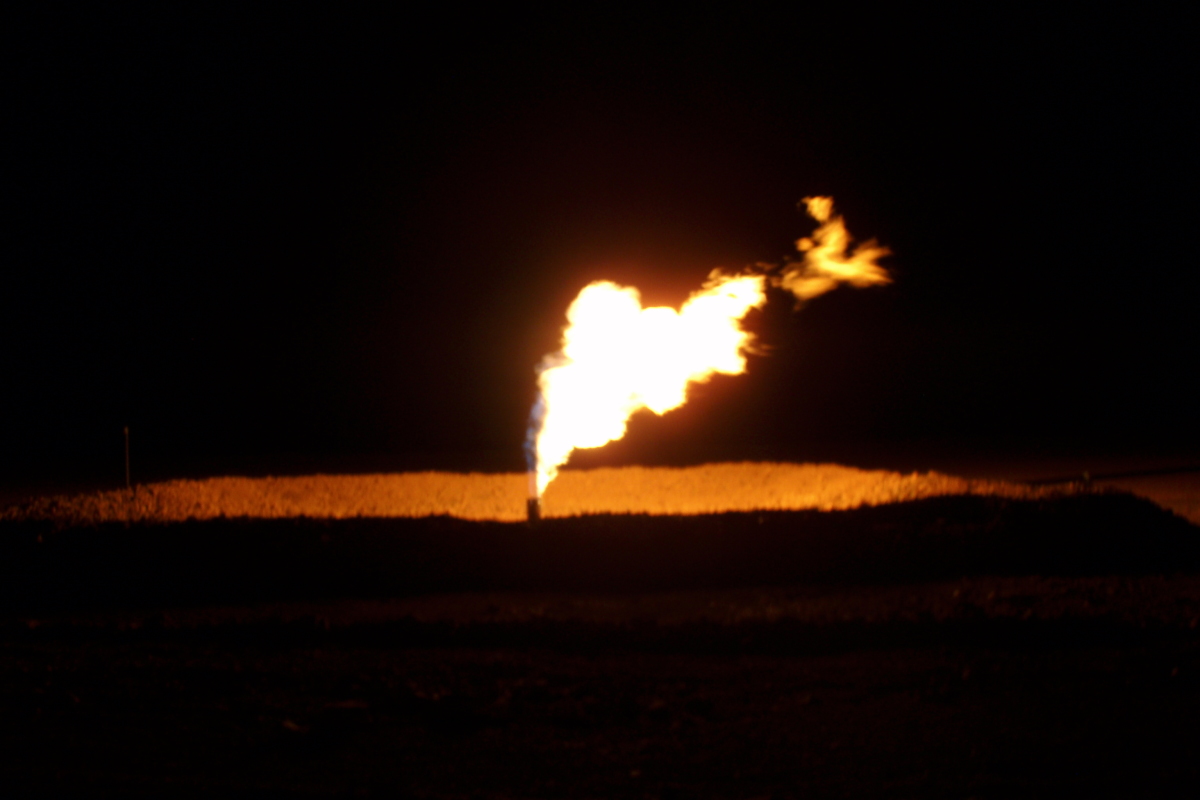 The Biden administration’s new crackdown on methane emissions at oil and gas facilities deferred action on flaring until next year. Joshua Doubek via Wikimedia Commons

Texas is at a turning point with regard to climate-disrupting, health-damaging methane emissions from the oil and gas industry.

Related developments in Washington and Glasgow, Scotland, last month could mark the beginning of the end of the long controversy over Texas state officials’ opposition to aggressive government action to reduce methane releases.

On the other hand, the paired announcements on both sides of the Atlantic may start just another chapter in the state’s persistent efforts to block federal action to combat climate change.

On Nov. 2, the Biden administration proposed sweeping new rules to reduce methane pollution from various oil and gas operations. The regulations are especially important in Texas, which releases a huge portion of the nation’s overall methane emissions from such equipment.

On that same day, the U.S. joined the European Union and 103 nations at the international climate summit in Glasgow in endorsing the previously announced Global Methane Pledge. The proclamation includes nations’ individual commitments to slash emissions of the gas. The new federal rules proposed by the Biden administration are intended to fulfill much of the U.S. pollution-reduction promise.

Study after study has documented Texas’ huge contribution to the methane/climate problem. Methane pollution includes leakage from pipelines and from both active and abandoned wells. Even more controversial are the industry’s routine releases (“venting”) and burning (or “flaring”) of methane at wells, when it is regarded as a waste byproduct, in order to lower costs.

The Environmental Defense Fund, an advocacy group that directs major attention to the methane issue, has estimated that oil and gas facilities in the U.S. release enough methane to equal the near-term climate-disrupting impact of 350 coal-fired power plants.

Worldwide, levels of methane and carbon dioxide (the latter being the only greenhouse gas that does more damage to the climate) “continued their unrelenting rise” in 2020, despite the pandemic-fueled global economic slowdown, the National Ocean and Atmospheric Administration reported earlier this year.

On the brighter side, sweeping methane reductions from industry are quite viable, the International Energy Agency said in a major report issued in October. The agency outlined “practical measures that governments and companies can take to secure a 75% reduction in methane emissions from fossil fuel operations” by 2050.

The multinational Global Methane Pledge’s goal is to cut worldwide methane emissions collectively by at least 30% from 2020 levels by 2030. These reductions would supplement major reductions in CO2 emissions from fossil-fuel use in an effort to keep the earth’s rising average temperature below thresholds that 191 nations set in the 2015 Paris Climate Accord. The thresholds were set in hopes of avoiding what scientists say would be the most catastrophic impacts of global warming.

National actions that make up the Pledge vary in different ways. Canada, for instance, committed to cut methane from oil and gas operations 75% by 2030. China, on the other hand, refused to endorse the Pledge but did acknowledge the need for methane reductions and promised a “national plan” to achieve them. Six of the 10 biggest methane emitters joined the Pledge – the U.S., Brazil, Indonesia, Mexico, Nigeria and Pakistan. Four others didn’t join – besides China they are India, Iran and Russia.

Methane is an appealing target for making major near-term reductions of greenhouse pollutants. It’s more potent than CO2 in trapping heat in the atmosphere, but breaks down faster.

The proposed U.S. regulations would affect hundreds of thousands of oil and gas facilities. For the first time, they would limit methane emissions from existing equipment. They would also strengthen Obama administration limits – which were reinstated by Congress early this year after the Trump administration rescinded them – for new and modified (post-2015) equipment. They would affect operations involving production, gathering, processing, transmission and storage of oil and gas.

The Environmental Protection Agency calculated these regulations would cut methane emissions at facilities that they cover by nearly three-fourths, compared to what they released in 2005. By 2035, the EPA estimated, the erased heat-trapping potential of the eliminated methane pollution would exceed the atmosphere-warming force of CO2 emissions from all U.S. passenger cars and commercial aircraft in 2019.

Venting and flaring at Texas wells are two practices that climate-action proponents have especially targeted, with little success, in urging stepped-up regulatory action by state officials. The Biden rules propose eliminating venting and seek public input on what to do about flaring in supplementary methane rules expected next year.

The same day the EPA rules were proposed, another federal agency, the Pipeline and Hazardous Safety Materials Administration, took methane-cutting action when it finalized a rule extending its authority to pipelines it didn’t already regulate.

Republican-led Texas’ record on methane regulation to date contrasts sharply with both these federal initiatives and with emission-reducing actions taken by Democratic officials in the oil-and-gas states of New Mexico and Colorado.

While New Mexico and Colorado have moved to ban flaring, for instance, the industry-regulating Texas Railroad Commission has taken only relatively small steps to reduce the practice, such as limiting the duration of flaring allowed in new permits this year.

State lawmakers have been no more receptive to repeated calls for aggressive action against flaring and on other methane issues. About a dozen bills addressing methane emissions were proposed in this year’s regular session of the Republican-dominated Legislature. None made it out of committee.

Gov. Greg Abbott, who voiced pride in his record of frequent lawsuits against the Obama administration’s environmental protection initiatives when he was Texas attorney general, had set the stage for that response in January.

A few days after Biden’s inauguration, Abbott promised to launch another “litigation strategy” to try to block climate and energy policies by the new president that might, in Texas officials’ reckoning, harm the oil and gas industry.

Dire harm is what Wayne Christian, one of the three elected commissioners who head the Railroad Commission, claimed that Biden’s new methane regulations would impose on the industry.

In a puzzling contrast to Christian’s combative statement, a Railroad Commission staff attorney said the agency where they both work was “poised and ready to cooperate” with the Biden administration on the new methane rules.

The American Petroleum Institute promised that it would collaborate with the EPA on its methane proposal to “help shape a final rule that is effective, feasible and designed to encourage further innovation.” 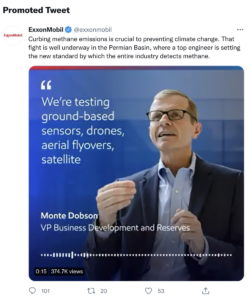 Exxon and other major oil companies have endorsed methane emission reductions to fight climate change. Texas officials have often expressed a contrary view. Last year, for instance, Texas Railroad Commissioner Jim Wright, shortly before his election to that post, voiced doubt about both pollution-caused climate change itself and methane’s role in.

Despite that pledge, the industry is not united on methane regulations. Major companies including Shell and Exxon Mobil have acknowledged that emissions reductions are needed, while smaller companies reportedly fear that strict regulations may severely damage them.

Against that backdrop, another recent indicator of a possibly softening Texas stance on federal methane rules – and perhaps federal climate regulations in general – is the recent record of the Texas Commission on Environmental Quality, which shares the state’s oversight of oil and gas wells. The TCEQ regulates emissions of methane and other air pollutants at oil and gas wells. The Railroad Commission regulates well completion and flaring.

When Congress reinstated the Obama administration’s rules for new and modified equipment early this year, environmentalists said they would monitor the TCEQ’s response to see if those regulations would be implemented in Texas. (During the Obama administration, Texas was alone among the states in refusing even to start planning to implement one key climate-protection initiative, the Clean Power Plan. And the state later sued to stop the Plan.)

This time, with the congressionally reinstated Obama methane rules in place, the TCEQ has been requiring the new and recently modified industrial facilities covered by those rules to comply, Cyrus Reed, conservation director of the Sierra Club’s Texas chapter, told Texas Climate News.

Even so, Reed said he believes both the TCEQ and Railroad Commission are likely to submit comments opposing the Biden rules.

“At a recent Railroad Commission hearing, the commissioners discussed that they will need to be ready for federal overreach from the Biden administration and possible action,” he added. “I would expect conservative states to challenge the Biden-proposed EPA rules on both wells and pipelines.”

New Mexico, by contrast, is an oil-and-gas state where Democrats leading the state government obviously believe that slashing methane pollution won’t be devastating to the industry, as Christian predicted.

State and local governments in New Mexico, which ranks second only to Texas in oil production, received a record $5.3 billion from the oil and gas industry in fiscal 2021 – slightly more than a third of all general-fund revenue, according to an industry report this week.

Nonetheless, New Mexico acted earlier this year to ban releases and flaring of natural gas at production sites, pipelines and other facilities.

New Mexico Gov. Michelle Lujan Grisham traveled to Glasgow to last month’s climate summit, where she voiced pride in that initiative to help fight climate change: “It’s an existential threat to the entire planet, and in a state that’s an energy state we have to live by example and get it right. New Mexico can show how to do it and lead by example for everybody else.”