The curbs on leaks of climate-changing methane from oil and gas operations restore Obama-era rules that Trump junked. Texas has a record of suing to stop climate-protecting measures and refusing to implement them. 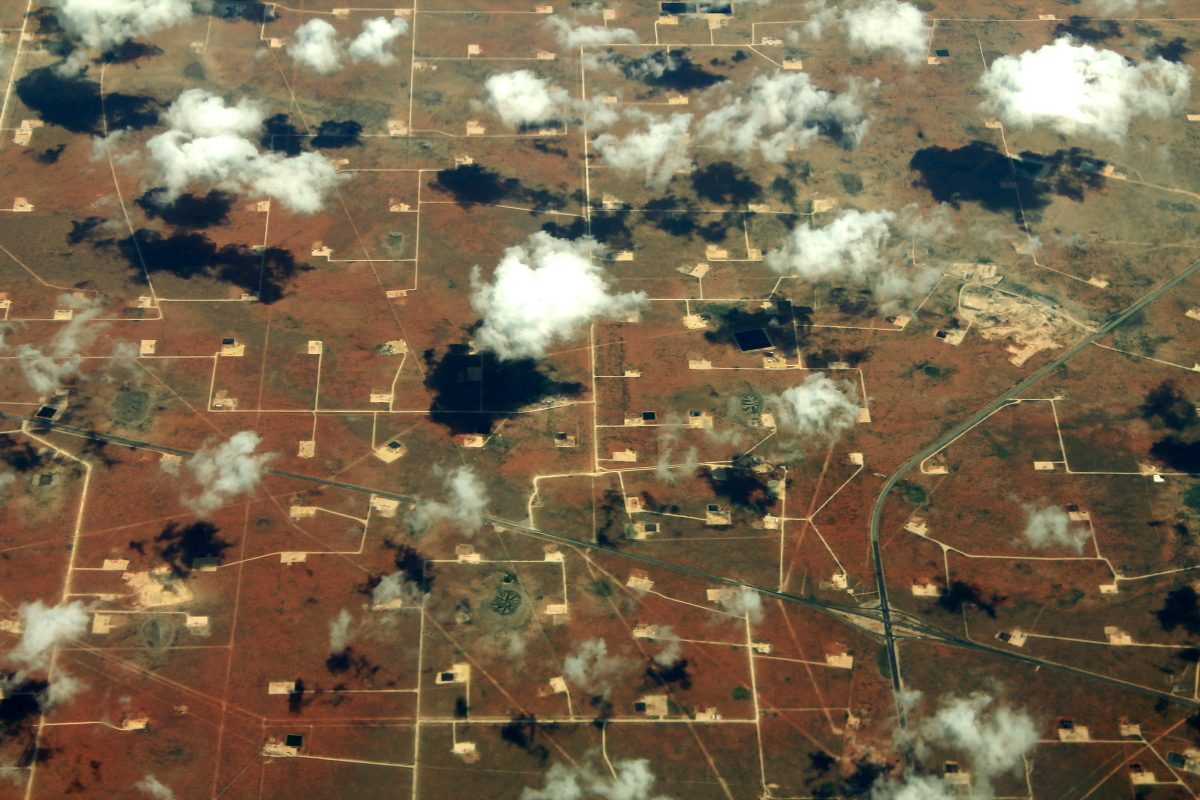 Aerial view of an oil field near Midland in West Texas. formulaone, CC BY-SA 2.0, via flickr

After years of Texas officials’ resistance to cracking down on climate-disrupting methane leaks from oil and gas operations, environmentalists will now focus on ensuring that they implement and enforce new federal rules in the state.

The reinstated rules, designed to curb leakage of that potent greenhouse gas at facilities built or modified since 2015, include requiring companies to use technology to detect and fix leaks at oil and gas wells. They do not address the more prominent issue of intentional oil-well releases and flaring of natural gas, which includes methane, because those companies regard it as a waste product there. Biden has proposed federal action on those practices, as well.

“Our next step is making sure that TCEQ [Texas Commission on Environmental Quality] does whatever it needs to do to reincorporate those requirements” about leaks in state regulations, said Cyrus Reed, interim director and conservation director of the Sierra Club’s Austin-based Lone Star Chapter.

Reed’s organization and allies campaigning for reducing methane pollution have ample reason to be on alert. Texas and North Dakota had sued to block the Obama methane-leak rules soon after their adoption in 2016. And Texas, alone among the states, had refused even to begin planning to implement Obama-era regulations to reduce climate pollution from electricity production.

Just days after Biden was sworn in as president with pledges to fight climate change and boost clean energy, Gov. Greg Abbott declared that Texas would again pursue a “litigation strategy” against the new president’s climate and energy policies when state officials think they threaten the oil and gas industry. Abbott, as Texas attorney general, sued to block Obama administration actions 31 times, mainly regarding environmental matters.

Scientific evidence has accumulated in recent years about methane’s major contribution to global warming and the huge role of Texas oil and gas operations in U.S. releases.

But unlike many other oil and gas producing states – including California, Colorado, New Mexico, Pennsylvania and Wyoming – Texas regulators haven’t taken comparably strong action on methane pollution, and state lawmakers failed to address the issue during the 2021 legislative session as well.

About a dozen bills addressing methane emissions (including routine flaring of natural gas at oil wells) were filed during the legislative session. There were only two hearings, and none of the bills made it out of committee, Reed said.

“I think that shows you the power of the oil and gas industry in Texas, particularly at the Legislature where if they don’t want a bill to move forward, it’s not going to move forward,” Reed said.

Cutting human-caused methane emissions by 45 percent this decade is possible and would help keep warming beneath a threshold agreed by world leaders, according to a May report  by the United Nations Environment Programme.

“Reducing human-caused methane emissions is one of the most cost-effective strategies to rapidly reduce the rate of warming and contribute significantly to global efforts to limit temperature rise to 1.5 degrees C,” the report said.

While methane has a short atmospheric life, it traps heat 28 times more effectively than carbon dioxide over a 100-year period, making it the second biggest contributor to climate change. About 30 percent of methane released into the atmosphere is from oil, gas and coal extraction.

Also in May, a separate study stated that not only is methane emission curtailment critical but that it must be accomplished quickly.

Using existing technologies and moving rapidly to cut methane emissions could slow the rate of the planet’s warming by as much as 30 percent, the authors of a study published in the journal Environmental Research Letters said.

A full-scale push using existing technologies could cut methane emissions in half by 2030, critical in order to limit warming and achieve goals in the Paris accord.

On the other hand, the report stated, a slow implementation could result in an additional tenth of a degree of global-mean warming by 2050 and a faster warming rate.

Large energy companies, such as BP plc, have supported the reinstated federal methane rules. BP and Shell last fall urged Texas regulators to end the routine flaring of natural gas. During the Texas legislative session, industry representatives said in committee meetings that they support a goal of zero routine flaring by 2030, Reed said.

“I think the fact that industry was saying essentially to legislators, don’t worry, we’ve got this, led to [the Legislature’s] leadership saying we don’t need to do anything beyond what industry is saying they’re going to do already”

While the Legislature declined to take any steps to address methane emissions, the two state regulatory agencies that regulate the fossil fuel industry took small steps this year to address emissions.

The Texas Railroad Commission made some changes to the process companies use to request waivers to flaring rules, including making changes to the data form, which now requires information about the location of a flare. The commission is also moving towards an online portal, so that all that information will reside in one database.

“That’s a step in the right direction,” Reed said, “It’s not what we and others were calling for. I worked on legislation calling for no flaring by 2025. Let’s just phase it out as a standard practice.”

[Below this story: “Other states ban oil-well flaring as Texas lets it continue”]

While the Railroad Commission regulates completion of wells and flaring, the TCEQ regulates air pollution including from methane and volatile organic compounds.

Last month, following years of delay and litigation, the TCEQ adopted federal rules to reduce emission of pollutants called volatile organic compounds (or VOCs) from oil and gas equipment in the Houston-Galveston and Dallas-Fort Worth areas because they contribute to those regions’ problems with ground-level ozone, a lung-damaging substance.

But the new VOC rules won’t apply beyond counties in the Houston and Dallas regions that violate the federal ozone health standard. The Permian Basin region of West Texas, which doesn’t violate that standard, has been the main focus in recent years of methane concerns in the state because of its expansive and intermittently booming oil and gas production.

“What the state hasn’t done is we don’t have a state methane rule,” Reed said. “Other oil and gas producing states – Colorado, Wyoming, Pennsylvania, and most recently New Mexico – have taken action themselves, both on flaring and methane overall.”

Reed said the Sierra Club hasn’t ruled out filing a rule-making petition at the TCEQ or Railroad Commission, but he doubts the agencies would take up independent rule making on methane outside of what federal rules require.

The environmental group will continue to raise the issue with the Legislature, arguing that because Texas is a leading oil and gas state, it should be a leader on producing oil and gas more cleanly, Reed said.

But given the politics around energy and climate change in Texas, Reed said he believes the best avenue for reducing methane from oil and gas operations in the state is to look to the federal government.

While the reinstated Obama-era rules govern new and significantly altered oil and gas equipment, the Biden administration is also weighing the adoption of similar rules for existing facilities without major modifications.

Nushin Huq is a contributing editor of Texas Climate News. She is a Houston-based independent journalist who focuses on covering energy and the environment.

Other states ban oil-well flaring as Texas lets it continue 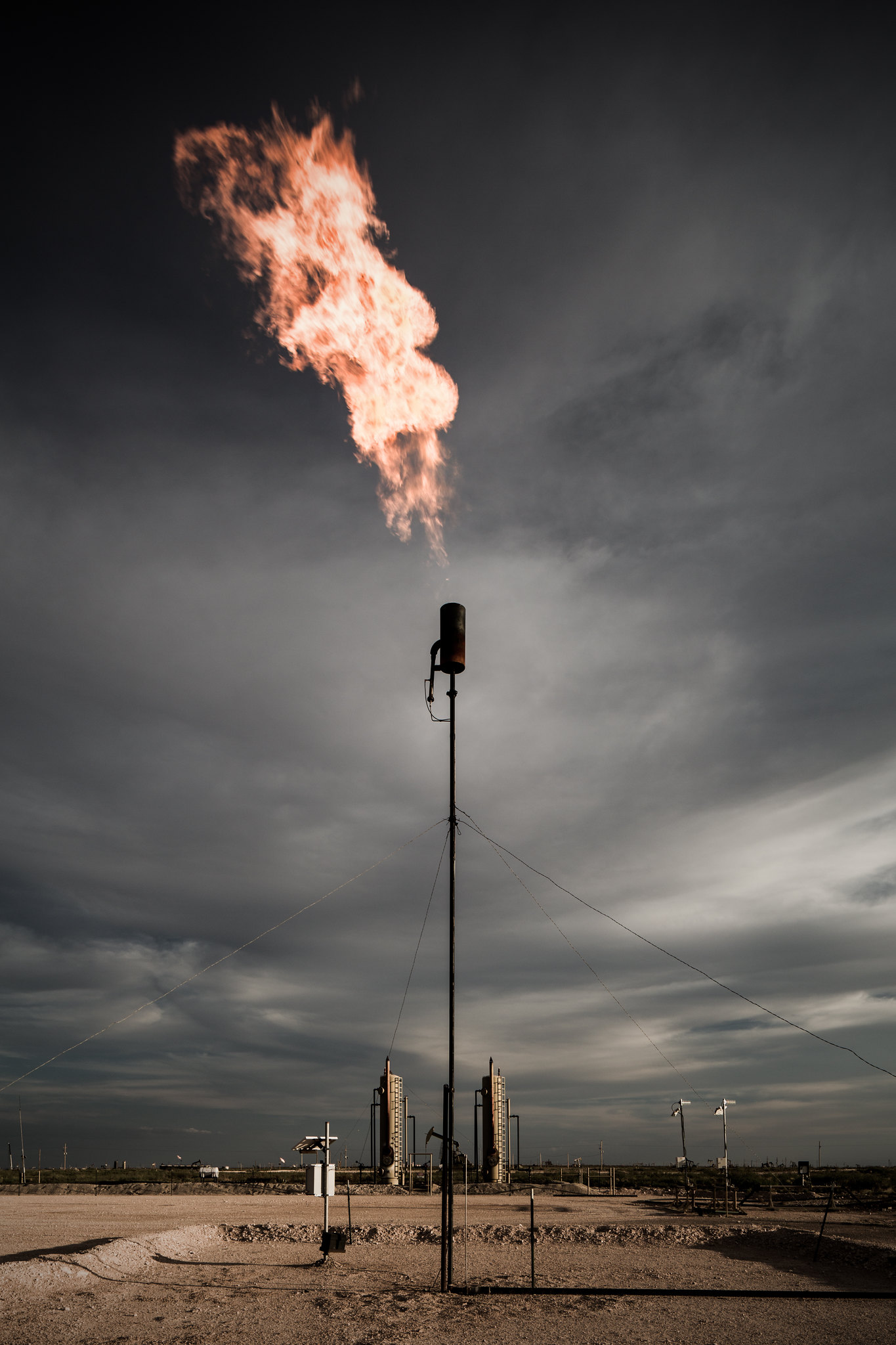 Texas is the national leader in the amount of natural gas that is vented and flared at oil wells – a source of climate-disrupting methane and also (in flaring) the other major greenhouse pollutant, carbon dioxide.

At the same time, Texas lags well behind some other oil-and-gas-producing states in taking aggressive action to limit that pollution.

The federal Energy Information Administration reported in December that the amount of natural gas vented or flared at oil wells in 2019 was the highest yearly average in its records. Companies release (“vent”) unburned natural gas or burn it (“flare”).

Reasons that companies cite for flaring and venting include lower costs, compared to capturing and selling the gas, and a lack of pipelines near enough to wells to do that.

While the Texas Railroad Commission, which has authority over oil-well flaring, has begun to limit the length of time it can go on in oil well permits, Colorado and New Mexico have both moved during the last eight months to ban flaring as a routine practice.

Last November, Colorado regulators acted to limit the practice to a limited number of approved circumstances. And in March, New Mexico officials finalized regulations to eliminate flaring at all oil wells across that state.

The Permian Basin, a geological formation where oil and gas production has boomed in recent years and been the site of much controversy over resulting methane pollution and flaring, is located mainly in West Texas, with the remainder in southeastern New Mexico.

Some oil and gas businesses have spoken out strongly for an end to routine flaring in the region, in contrast to statements by top Texas officials.

“It’s a black eye for the Permian Basin,” Texas-based Pioneer Natural Resources CEO Scott Sheffield told an energy conference in 2019. “The state, the pipeline companies and the producers – we all need to come together to figure out a way to stop the flaring.”

For example, the most recently elected member of the three-person Texas Railroad Commission voiced doubts about both manmade climate change and flaring’s contribution to it on a business podcast a few weeks before he won the seat last November.

Republican Commissioner Jim Wright, owner of an oilfield-waste recycling company, said: “Can you tell me of any exact research that says flaring is harming our atmosphere, any worse than emissions from a car or anything else they’re claiming is making changes to our climate?”