Historically, Republicans have voiced more support for renewables than concern about climate change. But their enthusiasm for clean energy appears to be eroding in another possible sign of partisan polarization. 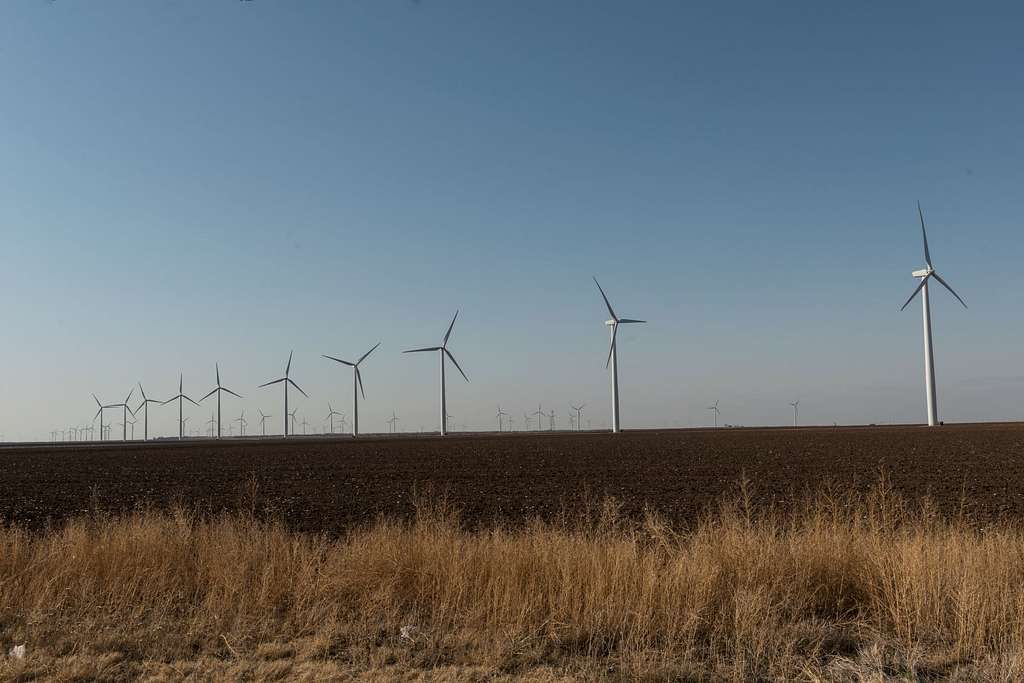 Polls showing Republicans’ lack of concern about climate change and opposition to actions explicitly labeled as ways to fight it have typically come with an important asterisk: Many still supported renewable energy.

Now, with a Democrat in the White House promoting renewable power, two recent national surveys show Republican enthusiasm for renewables has declined notably over the past year. The results represent yet another possible sign of growing partisan polarization, in this case on already divisive climate-related issues.

The Pew Research Center asked U.S. adults in April if they favored expanding wind and solar energy and measured an abrupt drop since 2020:

The partisan gaps on expanding solar (20 percentage points) and wind power (29 points) are now larger than at any point since the Center started asking about these energy sources in 2016. 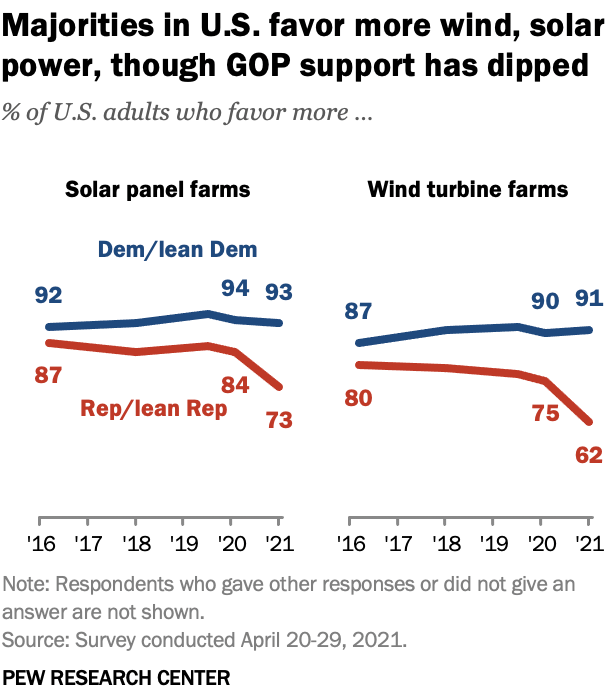 A similar finding emerged from a poll conducted in March by opinion researchers at Yale and George Mason universities. They asked if developing clean energy sources should be a “high” or “very high priority” for the president and Congress:

Over the past year, there has been a sharp decline in the percentages of both liberal/moderate Republicans and conservative Republicans who think developing sources of clean energy should be a priority for the president and Congress. The current numbers are all-time lows since we first asked the question in 2010. 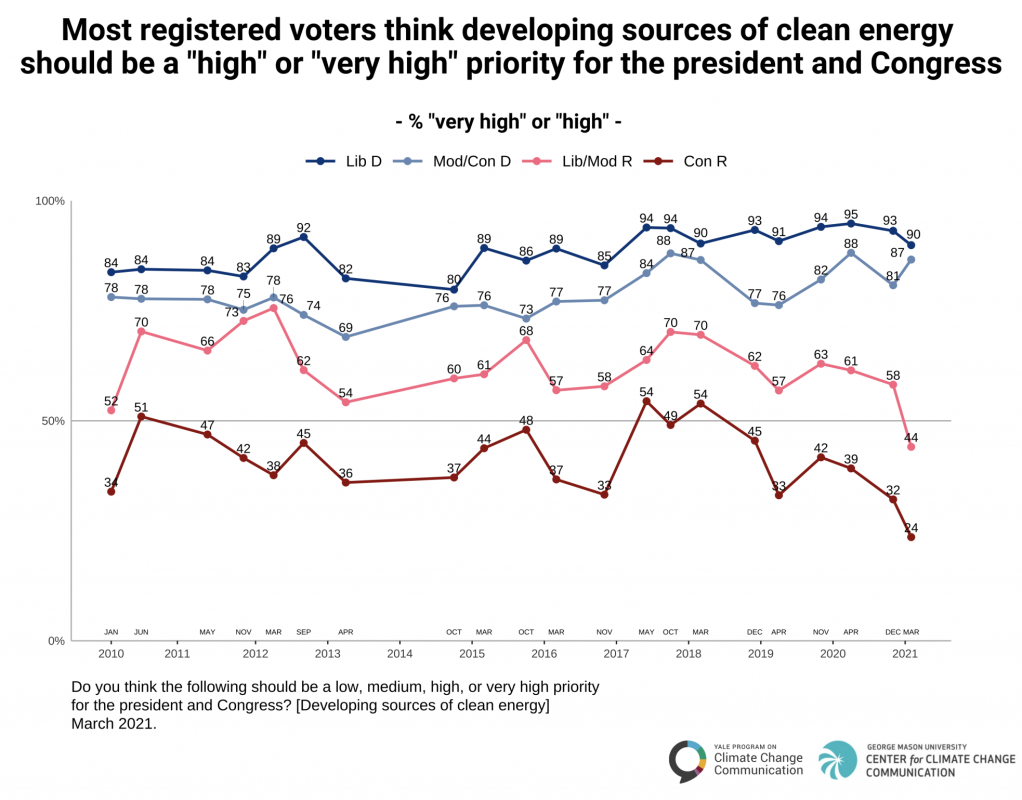 Texas Climate News asked Anthony Leiserowitz, director of the Yale program that collaborates on Yale-George Mason polls about climate issues, why he thinks opinion researchers have just recorded such steep declines in Republic support for renewables. He replied:

We’re doing a deeper analysis now, but I suspect at least three things led to the most recent drop: One, the Texas freeze happened just a few weeks before this survey. Two, Republican leaders (and others) blamed renewables for the debacle. A lie, but they repeated it over and over and over again in their media ecosystem;. Three, we see in this data that Republicans who are more frequent watchers of Fox News prioritize clean energy far less than their fellow Republicans who don’t watch Fox News.

So basically, I suspect we’re looking at the combination of “political elite cues” and conservative media ecosystem effects amplifying anti-clean energy messaging – very similar to what we found they did to the Green New Deal.

At the same time, the trend toward greater support for renewable energy has increased among Democrats, given the twin forces of greater awareness of the negative consequences of climate change combined with growing unanimity within the Democratic Party in support of renewable energy.

This partisan divide is especially strong in those states where the oil, natural gas, and/or coal industries are a major source of jobs, such as Texas, Pennsylvania, North Dakota, Wyoming, Louisiana, New Mexico, Alaska and West Virginia.

Another source of this opposition stems from the dependence of the renewable energy industry on federal subsidies, which in turn are funded by tax revenue, which in turn are paid by tax payers, which generates opposition from free-market oriented Republicans who believe energy use should be left primarily to market forces rather than government intervention.

General evidence of the “growing partisan polarization in the U.S.” that Jones described was present in the most recent Kinder Houston Area Survey, conducted annually since 1982 by opinion researchers at Rice.

In the latest edition of the Houston poll, conducted between January and March and released in May, the gap between Democrats and Republicans had grown since last year to 39 percentage points on the question of whether respondents “believe that the country is headed for better times.”

Stephen Klineberg, an emeritus professor of sociology at Rice who founded the Houston Area Survey, said that this finding demonstrates a “remarkable polarization in outlooks on the American future after the 2020 election.” 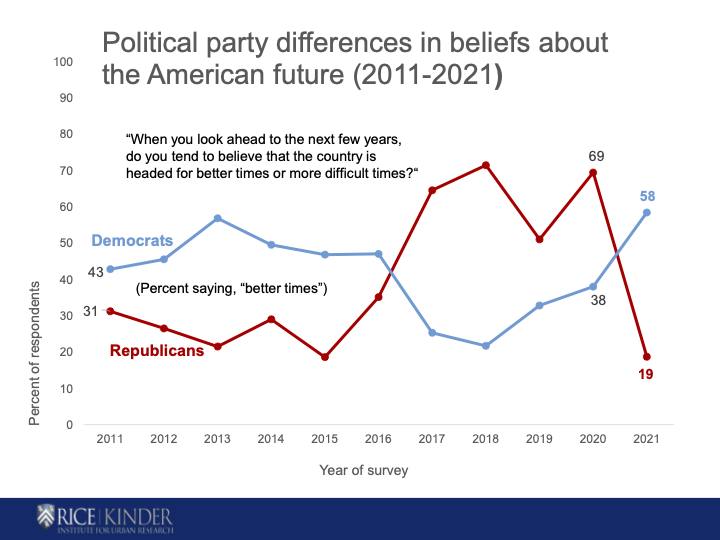