Actions and statements by Brazil’s far-right president Jair Bolsonaro, elected last year, have inspired fears that a new wave of destruction could hit the vast Amazon forest with severe consequences for the earth’s climate and biodiversity, along with the region’s indigenous people.

Public protest about Bolsonaro’s environmental policies, as well as his self-avowed homophobia, prompted the cancellation of his scheduled appearance this month at a black-tie gala at the American Museum of Natural History in New York. Mayor Bill de Blasio joined the outcry, calling the Brazilian leader “a very dangerous human being.”

Bolsonaro’s visit to Dallas this week has also been highly controversial. He lunched privately with local business people, but Dallas Mayor Mike Rawlings said he wouldn’t attend the event or meet Bolsonaro, citing his Amazon policies as one reason. Those policies, Rawlings said, “are very concerning to me, being a citizen of planet Earth.”

Texas Climate News contributing editor Melissa Gaskill, an Austin-based journalist who often writes about science and the environment, traveled to Brazil recently to learn more about the Amazon forest and its role in climate change.

The entire forest or basin covers more than 2.5 million square miles, 40 percent of the South American continent, and contains more than 6,000 species of trees alone, ranging from towering rubber trees to spindly palms. It provides 20 percent of the planet’s oxygen and freshwater and plays a major role in regulating climate around the planet.

Along the banks of the Rio Negro north of Manaus, the forest forms a mosaic of green, a seemingly impenetrable wall stretching as far as the eye can see in every direction. This part of the Amazon forest may appear relatively untouched, but as a whole, it faces serious and growing threats. Failing to address those threats is certain to increase climate change and its effects around the world.

Sixty percent of the Amazon basin lies within Brazil, a country that, under the United Nations Paris Climate Agreement, aimed to reduce its 2005 levels of greenhouse-gas emissions by 43 percent by 2030. That goal depends primarily on the country ending illegal deforestation and undertaking significant reforestation. Deforestation increases heat-trapping carbon dioxide in the atmosphere, while reforestation decreases it. Roughly 20 percent of the Amazon is already deforested; between 1985 and 2015, Brazil lost almost 173 million acres (70 million hectares) of native vegetation cover, territory twice the size of Germany.

The country drastically reduced deforestation between 2003 and 2014, but the rate started climbing after deep government budget cuts in 2015. It jumped by almost 50 percent during just three months last fall – months that Jair Bolsonaro spent successfully campaigning for president on promises to open up more protected land to mining, farming, and other industries and threats to leave the 2015 Paris Agreement.

“The government [of Brazil] today is not giving signs for us to be optimistic,” said João Ferraz, a scientist who studies tropical forests at the National Institute of Amazonian Research (INAP) in Manaus. “And no government has invested sufficiently in environmental enforcement. The rainforest ecosystem is fragile.” 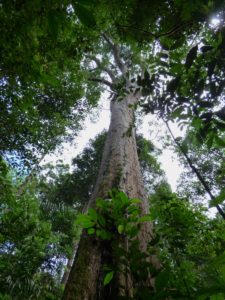 Fragile – and key to mitigating climate change worldwide. According to one study, Amazon deforestation accounted for 1.5 percent of the increase in atmospheric levels of carbon dioxide since the mid-nineteenth century. Worldwide, forests store 40 percent more carbon than do fossil fuel deposits, according to a November 2018 report, “Forest Mitigation: A Permanent Contribution to the Paris Agreement,” by the Climate and Land Use Alliance, a collaborative of U.S. foundations. Forests also absorb about 30 percent of man-made global greenhouse gas emissions — just over 11 billion metric tons of carbon dioxide per year, more than the oceans. Conversely, forests can add carbon dioxide to the atmosphere when trees are burned or decompose.

Deforestation trends, unfortunately, appear to keep heading in the wrong direction, worldwide and in Brazil. In 2018, according to a Global Forest Watch study, the planet lost about 30 million acres of tropical forest, almost 9 million of them old-growth or primary forest, which stores more carbon than other types. Brazil landed at the top of the list with the loss of 3.3 million acres of old-growth tropical forest. Climate change is likely to cause more variability in Amazon rainfall, contributing to deforestation through increased tree mortality and fires, according to a report in the journal Nature Geoscience. Its authors conclude that current greenhouse gas emission levels ultimately could cause significant areas of the Amazon forest to transition to savanna – a grassy plain with few trees – adding to losses due to clearing by humans. Ironically, research shows that, given the role of intact forests in maintaining rainfall patterns, restoring degraded forests and increasing productivity could meet agricultural demand for decades without the need to clear more forest.

Adding insult to injury, scientists predict that most of the world’s more than 40,000 tropical tree species qualify as globally threatened, including at least 36 percent and up to 57 percent of Amazonian tree species. The United Nations Intergovernmental Science-Policy Platform on Biodiversity and Ecosystem Services (IPBES) reported this month that the rate of species extinctions globally is accelerating, threatening some 1 million animal and plant species with extinction, many within decades. Five factors are directly responsible, the authors of the report said: land and sea use changes, direct exploitation, climate change, pollution and invasive species. Losses of intact ecosystems have occurred primarily in the tropics, IPBES reported.

Still in the Paris accord – for now

Bolsonaro has yet to act on his threat to leave the Paris Accord, but if he does, it would prove a serious setback to world efforts on climate change. According to a paper from the Climate, Land, Ambition and Rights Alliance, an international coalition of conservation, justice, faith and other groups, it likely won’t be possible to meet the Paris accord’s 1.5-degree Celsius (2.7-degree Fahrenheit) limit in global temperature rise without maintaining standing forests and allowing degraded ones to recover around the world. In 2015, Brazil accounted for 12 percent of the Earth’s forest cover.

The changes already made in Brazil provide plenty of cause for concern about the future of the rainforest. In addition, severe budget cuts have affected research on the rainforest and climate change, said Giordane Augusto Martins, a researcher at INAP. His current research projects, fortunately, have significant funding from outside Brazil. One involves the Amazon Tall Tower Observatory, a joint project of INPA and the Max Planck Institute for Chemistry in Germany. Scientists are using instruments mounted on the 1,066-foot tall tower to continuously record meteorological, chemical and biological data, such as the concentration of greenhouses gases, to better understand the role of the Amazon tropical forest in Earth system processes and climate.

“The Amazon rainforest is the biggest carbon store in the world. We don’t know yet what effects climate change will have,” Martins said. “But already we see extreme events, increased fires and storms, and rainfall anomalies in the Amazon.”

The Amazon forest’s role in the health of the planet has never been more critical, nor its future so uncertain. It seems changes in Brazil that may threaten that forest couldn’t have come at a worse time.

Melissa Gaskill is a contributing editor of Texas Climate News. She thanks Mark Baker of Amazon Nature Tours for arranging meetings with National Institute of Amazonian Research researchers in Manaus.