Texans in Paris for assorted activities linked to climate negotiations 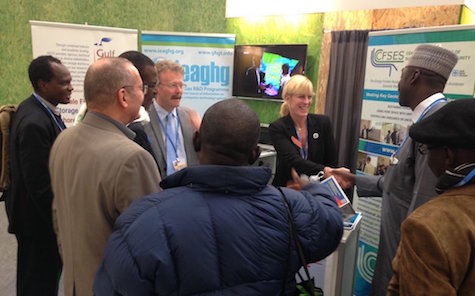 Katherine Romanak of the University of Texas talks to international delegates at an exhibit at the U.N. conference.

Thousands of people have poured into Paris for the U.N. climate conference. Many aren’t national delegates to those talks or journalists assigned to cover them.

The additional Paris visitors came to participate in a kaleidoscopic array of “side events” and exhibits at the U.N.-sponsored negotiations, as well as climate-themed events scheduled elsewhere in the French capital during the talks.

Texans who travelled to Paris to participate in one or more of these events illustrate the variety of activities that are taking place there because of, but not formally part of, the negotiations themselves. Some examples:

Officials of Austin and Travis County, where the state capital city is located, are proud of their programs addressing climate change (which contrast dramatically with the generally doubtful and unconcerned stance of state government leaders). Three officials from Austin and the county went to Paris for the climate conference – Mayor Steve Adler, City Council Member Leslie Pool and County Commissioner Brigid Shea.

Among his activities in Paris last week, Adler signed a Compact of Mayors – a “global coalition of mayors pledging to reduce local greenhouse gas emissions, enhance resilience to climate change and report transparently.” 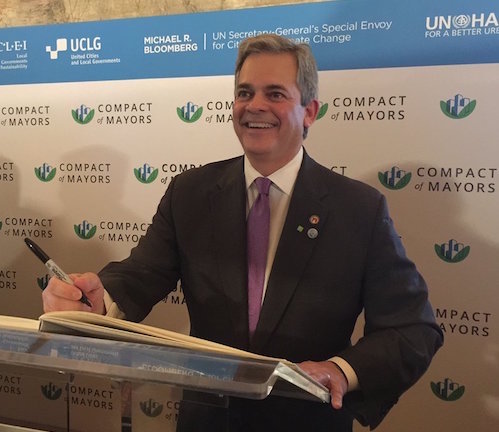 “As you look at the goals being set [by international negotiators trying to forge an emission-reducing agreement], they are ultimately implemented at the local level,” he told the Austin American-Statesman.

“Austin is growing by 30 percent and it’s because of our climate actions, not in spite of them,” he proclaimed in one Paris panel discussion, perhaps alluding to the arguments of state leaders that measures to fight climate change would hurt the Texas economy.

On Sunday, Adler attended an event at the residence of the U.S. ambassador to France where California Gov. Jerry Brown, an outspoken climate-action advocate, announced new signatories to an international agreement by states and regions committed to limiting their greenhouse-gas emissions to two tons per capita by 2050 – about 80-95 percent below 1990 levels.

When Pope Francis of the Roman Catholic Church issued a special document calling for robust efforts against climate change earlier this year, it helped direct new media attention to religiously-based appeals for climate action that have been made by people of different faiths over the years.

Three Texans who bring such perspectives to the climate issue went to Paris for the conference and associated events – climate scientist Katharine Hayhoe of Texas Tech University and Bee Moorhead and Yaira Robinson of the Austin-based Texas Interfaith Power and Light organization. 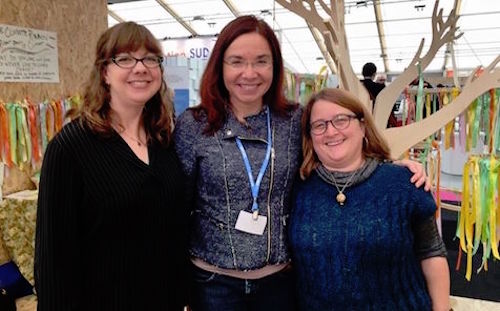 Moorhead and Robinson were in Paris for the first week of the Nov. 30-Dec. 11 conference to  “connect with activists, scientists, and religious leaders from around the world in order to bring real-world climate justice stories home to the Texas faith community”

Among other activities, they produced a “Boots and Berets” blog, replete with introductory French accordion-music and numerous interviews with representatives of various faith-based climate-action organizations.

Hayhoe is an evangelical Christian who has been energetic in efforts to educate fellow evangelicals, many of whom have historically been skeptical about human-caused climate change, about the findings of climate science and motivate them to join her in faith-inspired support for climate action.

Among her Paris activities was delivering the evening keynote address Saturday at a daylong conference at St. Michael’s Anglican Church hosted by European evangelicals, “A Christian approach to climate change.” Her talk’s title: “It’s time for change.”

The same day, she posted her expectation for the U.N. negotiations’ outcome on Facebook:

I’d be shocked if we didn’t emerge [with an] agreement on some solid and quantitative actions. I’d also be shocked if these actions were sufficient. But I am very much a glass-half-full person. Anything coming out of this will be better than what we had going in.

Experts from many nations have been engaged in numerous technical discussions in side-event sessions on various issues related to climate change. Two representatives of the University of Texas’ Gulf Coast Carbon Center (GCCC), Katherine Romanak and Hilary Olson, are among the hundreds of participants.

GCCC, part of UT’s Bureau of Economic Geology in its Jackson School of Geosciences, is involved with researching opportunities for capturing heat-trapping carbon dioxide emissions at industrial facilities and injecting them into reservoirs deep underground so they won’t contribute to global warming. The center also conducts public-education activities about potential risks associated with this storage (commonly called “sequestration”) and helping businesses “develop an economically viable industry to sequester CO2 in the Gulf Coast area.”

At Paris side events, Romanak and Olson have hosted and participated in a number of events and exhibits. Romanak was a panelist for a discussion of opportunities for developing nations to use carbon capture and storage technologies. According to a published report on the panel, she “highlighted the great potential of offshore basins to increase geological storage of CO2.”

The environmental justice movement grew over the past few decades out of concerns that minority and poor communities were disproportionately harmed by things like municipal landfills, toxic waste dumps and industrial pollution.

More recently, environmental justice advocates have increasingly focused also on the impacts of climate change on those same populations.

A prominent voice on such issues for many years, both as an academic researcher and outspoken advocate, has been Robert Bullard, professor of sociology and dean of the Barbara Jordan-Mickey Leland School of Public Affairs at Houston’s Texas Southern University and often called the father of environmental justice.

Bullard was one of the organizers of a trip to the Paris conference by a delegation of several dozen students and faculty mentors from 15 schools comprising the Historically Black Colleges and Universities Climate Change Consortium.

The consortium, coordinated by the Jordan-Leland School and a center at Dillard University in New Orleans, “was conceived to train a new generation of climate leaders and help raise awareness about the disproportionate impact of climate change on vulnerable and marginalized communities in the United States and around the world.”

Three students from TSU and two students from Austin’s Huston-Tillotson University were among the delegation members. (Bullard and Beverly Wright of Dillard were interviewed at the conference about the links between environmental justice and climate issues.) 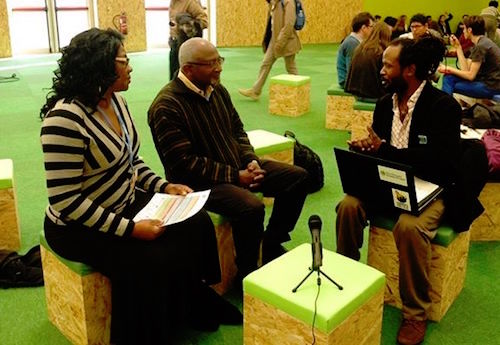 Beverly Wright of Dillard University and Robert Bullard of Texas Southern University, being interviewed at the Paris conference

Members of a Houston-based environmental justice organization that has focused much of its attention on industrial neighborhoods, Texas Environmental Justice Advocacy Services (T.E.J.A.S.), also travelled to Paris to participate in events related to the U.N. conference as well.

The members were involved with two delegations at conference side events representing communities in five Gulf Coast states and indigenous-rights advocates. 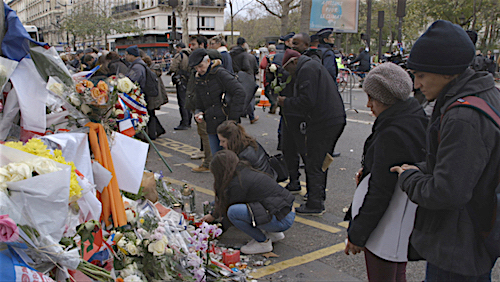 Yudith Nieto and Emmanuel Guajardo of T.E.J.A.S. visit a memorial to victims of last month’s terrorist attacks in Paris.

At the start of the conference, T.E.J.A.S. issued a statement indicating it would spotlight the ties between climate-change and other environmental impacts :

T.E.J.A.S. delegates want the world to take note that impacted communities are experts in developing real solutions to the climate crisis. Low-income communities of color suffer from CO2 emissions in addition to cumulative impacts from refineries, ports and chemical plants and should be consulted and included in every step of the process.

Katharine Hayhoe is a member of TCN’s Advisory Board. The volunteer members have no authority over editorial decisions.