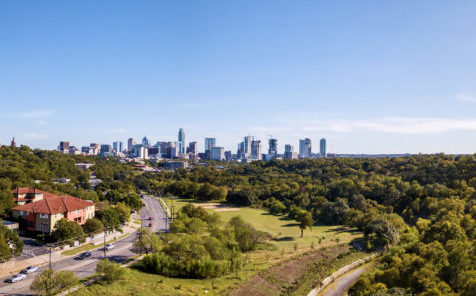 Cities+Climate is an occasional series in which TCN examines some of the ways that Texas cities are responding to scientists’ findings and projections about climate change – or not responding.

Some pretty big greenhouse-gas emitters that surround the urban cores of Dallas-Fort Worth and Houston are finally getting their due as players in the state’s outsized carbon footprint.

These carbon dioxide powerhouses aren’t refineries or coal-burning power plants, although the state still has plenty of those. They’re amalgamations of homes, lawns, leaf blowers, SUVs and shopping centers – in other words, suburbs.

Texas’ biggest metropolitan areas are regions of long commutes. That means the suburbs have high climate impacts from transportation – almost always the biggest factor – plus electricity and natural gas for those suburban manses and carbon costs of food, goods and services.

Early this year, the Austin City Council is to consider CodeNEXT, a rewrite of the city’s land development code that would seek, among other things, to reduce Austin’s reliance on the automobile – an idea with environmentalists’ support. Houston planners have a new vision for downtown that emphasizes transportation reforms and more housing. In Dallas, downtown housing has boomed, and a growing group of advocates is pressing for land-use and transportation changes.

But changing cities is a tough task, given that after World War II marketing turned distance from downtown, a big house and a big yard into sacred American ideals.

Add to that the chicken-and-egg pattern of transportation policies. A new, remote subdivision justifies new highways, which in turn justify even more remote subdivisions and highways. Pretty soon the webs extend far past the horizon.

Urban thinkers have long promoted higher in-town housing densities and fewer far-flung highways and subdivisions as ways to save open space from being paved and to restore an eroded sense of community. Climate change makes it more urgent to consider how people live.

A study this year in Nature Climate Change found that previous estimates of climate impact on cities underestimated or neglected the urban heat island effect – extra heat when asphalt and concrete replace plants and water. So urban damage will be worse than thought.

With little or no current federal or state interest in addressing climate disruption from human causes, local solutions such as smart-growth planning are all Texans can draw on.

Interactive color maps from the CoolClimate Network at the University of California at Berkeley show the pattern – and the challenge – in stark greens and reds.

The green patches are carbon-friendly downtowns, with their short or pedestrian commutes. The red spots are suburbs with bigger climate impacts. The deeper the red, the bigger the median home’s annual CO2 output, according to CoolClimate.

A 2014 study found that nationwide, suburbs’ higher climate impact was wiping out the benefits of more carbon-friendly city centers. It wasn’t the suburbs’ lower housing density, but the total energy use per household – transportation, power and others – that made the difference. Researchers called for comprehensive carbon planning, from transportation to building codes.

The five Texas Zip codes with the highest median CO2 emissions per household are all outlying neighborhoods in the Dallas-Fort Worth or Houston regions:

The Tarrant and Denton County neighborhoods comprise a high-income cluster west or north of Dallas/Fort Worth International Airport. Houston’s top-five members are in the Energy Corridor-Katy area west of downtown and the Clear Lake area (NASA) to the south.

Southlake, population 31,000, is a suburb of superlatives: median household income of $183,125, triple the statewide figure; median home value of $556,000, four times the state’s median. Within the city’s 76092 Zip code, where two-thirds of the people live, the median household’s carbon footprint, nearly 91 metric tons per year, is nearly double the median for Texas.

Urban core Zip codes in the city of Dallas range from about 35 to 50 tons per year.

Urban areas have many possible incentives for shrinking their climate impact, such as avoiding increases in heat-related deaths and climate-related floods and droughts.  There’s also the virtue of helping to stem global harm.

But whether Texas – either the state or the cities themselves – will act on the warnings is still uncertain.

Randy Loftis is a senior editor at Texas Climate News.