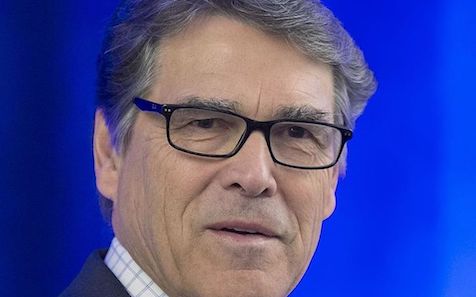 When Donald Trump nominated former Texas Gov. Rick Perry to be his secretary of Energy, there were questions.

How would Perry perform as the head of an agency he had promised to abolish in his own futile bid for the White House, but whose name he embarrassingly forgot in a debate?

In helping shape and carry out the Trump administration’s energy policies, how much would he draw on his tenure as governor – a tenure that saw him champion the expansion of both climate-disrupting coal power plants and climate-protecting wind energy in Texas?

Regarding the subject at the very core of the climate issue – human causation of climate change through pollution from fossil fuels – Perry assumed his new federal job with a cautiously worded step away from his former climate-science denial and toward the consensus scientific view, which is that most global warming is due to that pollution.

Previously, Perry had jovially ridiculed climate science, essentially calling it a hoax by researchers seeking funding. In his confirmation hearing in January, however, Perry dropped that snarky, dismissive stance:

“I believe the climate is changing,” he said. “I believe some of it is naturally occurring, but some of it is also caused by man-made activity. The question is how do we address it in a thoughtful way that doesn’t compromise economic growth, the affordability of energy, or American jobs.”

In recent days there have been early signs of the shape Perry’s performance at the Energy Department may take in an administration that has pledged to roll back the Obama administration’s regulations on climate-changing emissions from power plants and cars and, more broadly, to boost the production and use of fossil fuels.

One uncertainty at the moment is whether Trump will follow through on his campaign pledge to withdraw the United States from the emission-reducing Paris Climate Agreement of 2015. There have been various reports of a tug-of-war among administration officials over whether to do that or not. For instance, Scott Pruitt, the former Oklahoma attorney general who now heads the Environmental Protection Agency, called the Paris pact a “bad deal” for the United States.

Last week, in a possible hint of Perry’s (or perhaps Trump’s) position in that intramural administration debate, a large illustration and caption about the Paris agreement (which the caption termed “a critical step forward”) disappeared from the top of the Climate Change page on the Energy Department’s website. In the Paris graphic’s place, with no caption, was an image of the earth, resting beachball-like on a carpet of turf grass.

That development, first reported by E&E News, followed by a few days a Politico article revealing that the Energy Department’s international climate office had instructed staff members “not to use the phrases ‘climate change,’ ‘emissions reduction’ or ‘Paris Agreement’ in written memos, briefings or other written communication.”

The U.S. offered no clear signal of intent with regard to the Paris pact at the G7 Energy meeting in Rome this week, where Perry and other energy ministers of the informal Group of Seven, a bloc of industrialized democracies, tried to develop a common position for the G7 heads of state to endorse at their own meeting late next month.

Unusually for such a meeting, there was no joint communique, a result of what Bloomberg reported was Perry’s objection to language supporting the Paris accord’s emission-reduction commitment and his insistence that any communique include support for the use of coal and other fossil fuels.

This week’s G7 energy ministers’ meeting was the culmination, however, of a tense dispute between the Trump administration and other G7 nations, because Perry and other U.S. officials “pushed to include stronger pro-coal, pro-nuclear language in a proposed joint statement on energy policy,” Politico reported on the basis of documents it had obtained and interviews with negotiators:

G7 officials, led by the Europeans, refused to agree to stronger language touting fossil fuels without assurances from the United States that it would stay in the Paris climate change agreement, according to officials briefed on the discussions.

The U.S. emphasis on coal “was seen as an issue for all of us,” one G7 country negotiator told Politico, noting that Canada, Europe and Japan all expressed frustration about the Trump administration’s position. The United States’ refusal to discuss or mention the Paris agreement in the joint statement was E.U.’s “biggest” red line during the meeting, the negotiator added.

A statement issued by Perry after the Rome meeting did not mention climate change or the Paris agreement but stressed the need to provide “universal access to affordable and reliable energy in order to promote economic growth and energy security.”

Perry noted that Texas’ economy and population had grown during his tenure as governor at the same time that “we reduced our emissions and improved our environment.”

Declaring that “renewables will continue to have an important role but traditional sources are still needed for energy and economic security into the foreseeable future,” he said the Trump administration believes it is “wise” for all nations to pursue energy strategies that include the use of coal, natural gas and nuclear power.

It was a strong echo of the “all-of-the-above” approach to energy policy that Perry had promoted as Texas governor with actions to facilitate both the growth of the state’s wind industry and to get environmental regulators to “streamline” their review of the impacts of proposed coal-burning power plants.