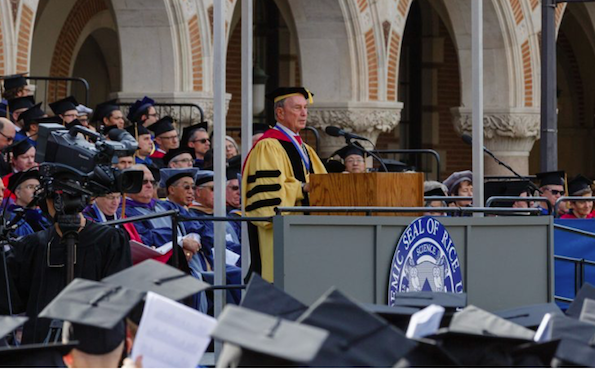 The critique formed part of Bloomberg’s broader discussion of the importance of honesty and honor in public life.

The theory that humans are dangerously altering Earth’s climate “is not a Chinese hoax,” he told Rice’s 2018 graduating class. “It’s called science – and we should demand that politicians have the honesty to respect it.”

Bloomberg did not refer to Trump by name – his swipes at the president, his administration and supportive officials were what reporters often call “thinly veiled.” The rhetorical veil he used, however, was about as thin as it gets, leaving no doubt who the ex-mayor’s primary target was.

Take the “Chinese hoax” comment, for instance. It was Trump who famously alleged via Twitter that the almost universal scientific consensus on manmade global warming is a “hoax” concocted by China to harm the U.S. economy.

That disparagement of climate science has been reflected since Trump’s 2016 victory in a series of policy initiatives to undo Obama-era actions to battle climate change. At the same time, his administration has been busy reducing or eliminating federal attention to – and promotion of – the scientific findings that drove those actions.

Bloomberg’s remarks at Rice on climate were part of his larger argument that the qualities of honor and honesty, which he noted have a common linguistic origin, are in short supply at upper levels of the federal government.

That the former New York mayor would charge Trump and his administration with an honesty deficit – and single out the president’s refusal to accept climate scientists’ findings and conclusions as a key example – was hardly surprising.

First, there’s this context: Bloomberg delivered his remarks as leading news organizations – without precedent during prior administrations, at least in modern U.S. history – have been tracking and cataloging what the New York Times flatly called “President Trump’s lies” and the Washington Post called his “false or misleading claims.”

Then there’s slightly less recent history: Speaking to the Democratic National Convention that nominated Hillary Clinton in 2016, Bloomberg (a former Democrat who became a Republican in 2001 and then an Independent in 2007) had assailed Trump for a business record short on integrity: “I’m a New Yorker, and New Yorkers know a con when we see one.”

Moreover, the two men’s records on climate change could hardly contrast more sharply. Trump has scoffed at climate science and has moved toward ending the federal attack on greenhouse pollution. Bloomberg is one of the foremost private-sector leaders in the international effort against climate disruption – warning of its dangers,  launching high-profile initiatives and providing a lot of money.

Immediately after Trump began U.S. withdrawal from the Paris Climate Agreement in 2017, for example, Bloomberg committed $15 million to assist the operations of the U.N. climate-change agency and traveled to France to assure French President Emmanuel Macron that Americans would continue to be part of the effort against climate disruption.

Some excerpts from the former mayor’s address in Houston:

The commitment to honesty is a responsibility that you accepted as an Owl [in signing Rice’s Honor Code]. It is also, I believe, a patriotic responsibility.

The cherry tree legend has endured because it’s not really about George Washington. It’s about us, as a nation. It’s about what we want for our children – and what we value in our leaders: honesty.

We’ve always lionized our two greatest presidents – Washington and Lincoln – not only for their accomplishments, but also for their honesty. We see their integrity and morals as a reflection of our honor as a nation.

However, today when we look at the city that bears Washington’s name, it’s hard not to wonder: What the hell happened?

[M]any of those at the highest levels of power see the plain truth as a threat. They fear it. They deny it. And they attack it – just as the communists once did. And so here we are, in the midst of an epidemic of dishonesty, and an endless barrage of lies.

Sometimes, it’s in the form of corruption. Sometimes, it’s abuse of power. And sometimes, it’s both. If left unchecked, these abuses can erode the institutions that preserve and protect our rights and freedoms – and open the door to tyranny and fascism.

Now, you might say: There’s always been deceitful politicians and dishonest politicians – in both parties. And that’s true. But there is now more tolerance for dishonesty in politics than I have seen in my lifetime.

My generation can tell you: The only thing more dangerous than dishonest politicians who have no respect for the law, is a chorus of enablers who defend their every lie.

Remember: The Honor Code here at Rice just doesn’t require you to be honest. It requires you to say something if you saw others acting dishonestly. Now that might be the most difficult part of an honor code, but it may also be the most important, because violations affect the whole community.

And the same is true in our country. If we want elected officials to be honest, we have to hold them accountable when they are not – or else suffer the consequences.

Now, don’t get me wrong: Honest people can disagree. That’s what democracy is all about! But productive debate requires an acceptance of basic reality.

Take science for example: If 99 percent of scientists whose research has been peer-reviewed reach the same general conclusion about a theory, then we ought to accept it as the best available information – even if it’s not a 100 percent certainty.

Yes, climate change is only a theory – just like gravity is only a theory. And the fact that Newton’s theory of motion didn’t take into account Maxwell’s observations on the speed of electromagnetic waves as a constant and that Einstein’s special theory of relativity better described motion when things move very fast – doesn’t mean that if I let go of this pen it won’t fall to the ground.

That, graduates, is not a Chinese hoax. It’s called science – and we should demand that politicians have the honesty to respect it.

Hard though it is to believe, some federal agencies have actually banned their employees from using the phrase “climate change.”  If censorship solved problems, today we’d all be part of the old U.S.S.R., and the Soviets would have us speaking Russian.

Of course, it’s always good to be skeptical and ask questions. But we must be willing to place a certain amount of trust in the integrity of scientists. If you aren’t willing to do that, don’t get on an airplane, don’t use a cell phone or microwave, don’t get treated in a hospital, and don’t even think about binge-watching Netflix.

Scientific discovery permeates practically every aspect of our lives – except, too often, our political debates.

Bloomberg stressed that he largely blames tribalism, “unrestrained, rabid partisanship” and “the public’s willingness – even eagerness – to believe anything that paints the other side in a bad light” for the predicament.

It’s a problem that isn’t confined to one party, he added: “In the 1990s, leading Democrats spent the decade defending the occupant of the Oval Office against charges of lying and personal immorality, and attempting to silence and discredit the women who spoke out.”

He offered the Rice graduates this advice as they move into the next part of their lives:

Recognize that no one, nor either party, has a monopoly on good ideas. Judge events based on what happened, not who did it. Hold yourself and our leaders to the highest standards of ethics and morality. Respect the knowledge of scientists. Follow the data, wherever it leads. Listen to people you disagree with – without trying to censor them or shout over them. And have the courage to say things that your own side does not want to hear.