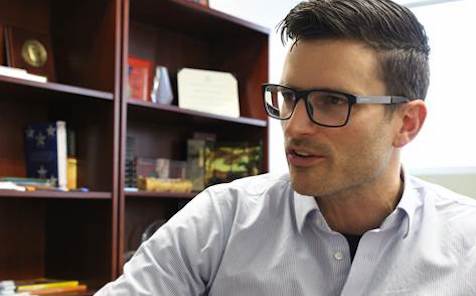 Texas’s competitive wholesale power market, covering 75 percent of the electric grid run by ERCOT (Electric Reliability Council of Texas), is accelerating toward a cleaner and cheaper fuel mix of natural gas, wind energy and utility-scale solar power. The U.S. Environmental Protection Agency recently announced its Affordable Clean Power proposal giving coal plants incentives to increase their efficiency. Yet those upgrades, which could help aging coal plants compete elsewhere, are too expensive for coal to remain competitive in Texas, argues Joshua Rhodes, an energy researcher at the University of Texas at Austin.

In a conversation with Texas Climate News contributing editor Polly Ross Hughes, Rhodes, of UT’s Energy Institute, explains how Texas’ fiercely competitive power market is speeding a cleaner fuel mix because producing power from cheaper natural gas, solar and wind energy simply costs less. Unlike other states, competitive power-generating companies plugged into the ERCOT grid get paid only for the power they produce. They do not get paid for maintaining a certain amount of power generating capacity.

President Trump, during his first year in office, withdrew from the Paris Climate Accord. More recently, his EPA announced plans to kill President Obama’s carbon-slashing Clean Power Plan and replace it with an Affordable Clean Energy proposal. The ACE relaxes emissions regulations for coal-fired power plants while encouraging more efficient plants. How would that likely affect Texas?

In the cutthroat market that Texas is, I don’t think it’s going to change a thing. ERCOT power prices are at historic lows, and they have been for years. Because we don’t have a capacity market in Texas like elsewhere, you only get paid if you produce power. The price that power’s selling for is so cheap that I don’t see any coal plant wanting to invest capital right now because that makes your cost go up. The name of the game now is keeping your costs down.

So even if you make coal plants more efficient, the improvements still cost too much?

There are some things you can do, but they’re marginal improvements at best. They’re not transformative. It would be hard to make a 1985 Cadillac get good gas mileage. You’re much better off buying a Honda Civic, something that is designed to be that way.

Not in the medium term. ERCOT maintains a queue of power plants that are in some stages of trying to connect to the grid. There is more wind in the interconnection queue than we have currently installed. Right now we have 22,000 megawatts (MW) of wind roughly installed on the system. There’s over 30,000 MW of wind in the interconnection queue. The IRS has said to get the tax credits you don’t have to be fully completed construction . . . You just have to have made reasonable progress . . .

Right now there are a whole bunch of wind projects out there that are trying to find [power purchase agreement] buyers. It would actually be a great time right now to be buying wind power. There are a lot of projects that are probably going to be selling their power at razor-thin margins. Otherwise they just don’t get built. The same with solar. Solar’s tax credits are starting to step down at the same time. Right now in ERCOT we probably have 1,200 MW of solar installed, but there’s something like 25,000 MW of it in the interconnection queue.

But what would keep Trump’s EPA from slashing into these renewable tax credits?

Former Texas Gov. Rick Perry did push the development of wind power. But why do you say that?

Look at the counties where the investment happens. They’re mostly rural red conservative counties. Anything that brings jobs and investment into your counties, you’re going to be in favor of it, just about. Iowa is a very Republican state. It is a distant No. 2 after Texas in terms of wind power. That governor is all for wind because he knows that the farmers who are getting royalty checks now have a secondary source of income. And they love it. They want it. Those ranchers that can make money above, on and below their land, if they own mineral rights, they’re happy to have that third income stream.

It can be an odd bedfellow situation. In my opinion, most government programs are jobs programs. At the federal level, you can rant and rave all you want. Since all politics are local when it comes down to it, these ruby red districts are going to want to keep that investment coming. It’s possible we may see an extension of the tax credits. That’s what happened in 2015. That was kind of a last-minute grand bargain between Republicans and Democrats. The Republicans wanted to be able to export oil. The Democrats wanted to keep the renewable tax credits. So did the Republicans, but they acted like they didn’t.

What about the tariffs Trump announced on solar panels from China? Does that have an impact?

I don’t think so. I think all the solar that was going to get built will get built. The price of solar has been falling drastically for the past decade. I came to the conclusion that it’s just going to be a temporary speed bump in deploying solar. [For example], say you were going to go out and build a solar farm today and the tariff were not there, it would cost $1,000. But now since we have the tariff [which kicked in last February], it would cost $1,050. Because just the general price of solar has been falling for years, if you look at that trajectory of falling prices, then in 18 months the cost would be back down to $1,000.

And Texas is blessed with its natural resources. We have the wind that blows. Our solar is west of the [electric] demand so it’s peaking later in the day when the grid [electric demand] is peaking. The grid’s not peaking exactly when the sun is overhead. The grid is peaking when the sun has moved on a couple of hours.

So we’re fortunate that we have a bunch of cheap land out there [West Texas] that is honestly not good for much else. And, with horizontal drilling, you don’t have to put a hole every so many 100 feet these days. There are actually best practices documents out there on how to build a solar array in an oil patch. You just put everything in certain areas where all the rigs can drill and just frack under them.