Is Texas preparing to drop its refusal to issue greenhouse-gas permits? 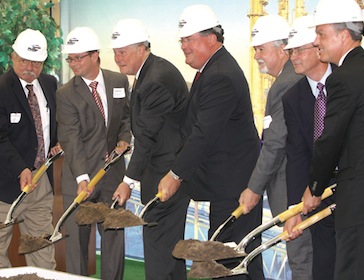 State Rep. Wayne Smith, a Baytown Republican and industry supporter, has filed a bill to require state officials to issue greenhouse-gas permits. Smith, third from left in this 2012 photo, is shown with government and corporate officials at a groundbreaking ceremony for a chemical-manufacturing plant in his district.

Is Texas preparing to throw in the towel in its war against federal regulation of climate-altering air pollution – at least abandon its refusal (alone among the 50 states) to help implement those rules by issuing federally-mandated, emission-lowering permits to industrial plants?

That’s one way to view a bill filed in the Texas Legislature, which would order the Texas Commission on Environmental Quality to start issuing such permits for carbon dioxide and other greenhouse gases.

The measure, House Bill 788, wasn’t introduced by a liberal lawmaker renowned for sponsoring measures for environmentalists. Rather, its author is Rep. Wayne Smith, a Baytown Republican and strong industry supporter whose district in East Harris County has numerous major petrochemical facilities.

With authority delegated by the U.S. Environmental Protection Agency, the states typically issue pollution-regulating permits required to carry out EPA regulations under the federal Clean Air Act, such as the rules that the Obama administration issued to restrict some industrial plants’ emissions of climate-warming greenhouse gases.

Texas officials, however, challenged the validity of scientific evidence (endorsed by the vast majority of scientists) that those pollutants are damaging the climate and claimed that the rules would seriously harm Texas’ energy-rich economy. They sued to block the regulations and refused to issue permits to carry them out, whereupon the EPA began issuing greenhouse-gas permits in Texas.

The Houston Chronicle reported that “chemical makers, oil refiners and pipeline builders” are backing Smith’s bill because they expect Texas’ speedier administration of the permit program would save time and money.

“We’re trying to speed up the process,” the newspaper quoted the legislator as saying.

The situation is undoubtedly marked by a certain irony – Texas refused to issue the permits, arguing that the rules they implement would hurt major Texas industries in the oil and chemical sector, and now those very industries and a key legislative ally want the state to issue the permits as a preferable alternative to the EPA.

Smith’s bill offers “political cover for the TCEQ” and “a gracious way out,” said Larry Soward, who was a former top lieutenant to Gov. Rick Perry when Perry was state agriculture commissioner  and later served as a TCEQ commissioner appointed by Perry.

In an interview with Texas Climate News, Soward said he was not surprised that industry leaders are now backing a bill to compel Texas to issue the greenhouse-gas permits.

“I’ve said all along that when they (industry leaders) want this fixed, it’ll get fixed,” said Soward, who has been serving as a consultant to Air Alliance Houston, an environmental advocacy group, since his retirement from state government and is currently its transitional director.

“As I have always said, when industry wants something or doesn’t want something” in Texas, “they get what they want or don’t want,” he added.

Smith expressed his support for the major industries in his district in a 2011 interview with Texas GOP Vote, a conservative website:

“My district, I have many, many large petrochemical facilities, and my constituents work there, creates jobs, creates good jobs, helps the school system, so we need to make sure that that industry stays strong, so that we’ll have the jobs, good schools.”

The fact that the permits bill was filed by such a strong industry backer as Smith, who chaired the House Committee on Environmental Regulation in 2011, “says it’s been discussed in all the appropriate channels” in Austin, Soward said.

He noted that language in Smith’s bill would require the TCEQ to streamline the greenhouse-gas permits and said he would be surprised if the EPA approves such provisions in a state-designed permit system.

The result, he said, could be “a worst case for industries” – a dual system, with both Texas and the EPA issuing permits for global-warming pollutants.

In any event, the bill would allow Perry and TCEQ Chairman Bryan W. Shaw to keep saying that they still don’t agree with the science behind the greenhouse-gas regulations but the state has to issue permits to enforce them because the Legislature ordered it, he said.

A factor in industry’s support now for what it sees as a more efficient state permit program may be President Barack Obama’s reelection last November. Obama’s unsuccessful Republican rival Mitt Romney opposed the EPA’s greenhouse-gas regulations, but with Obama now starting a second term in the White House, they could be extended to additional industrial sources of those pollutants.

In particular, environmentalists are calling on the administration to regulate emissions from existing power plants (new plants would be covered under proposed rules) and adopt rules to reduce emissions of methane, a potent climate-warming gas, from natural gas production facilities.

A federal tally released last year indicated that Texas industrial facilities (led by coal-fired power plants) had much larger combined emissions of greenhouse gases than those in any other state – more than the second- and third-ranking states combined.  Besides its many power plants, Texas is home to a growing array of natural gas facilities that could also be affected if the administration expands the reach of the greenhouse-gas regulations to include those industry categories.

The World Resources Institute, an influential environmental think tank based in Washington, last week added its voice to calls from other climate-action advocates for the administration to do so.

In a new report, the institute said the administration has the authority, even without new congressional action, to meet its goal of a 17 percent cut in U.S. greenhouse-gas emissions from 2005 levels by 2020:

The analysis finds that the administration has the opportunity to move forward in four key areas: Implementing strong standards for carbon dioxide pollution from existing power plants; reducing non-energy sources of emissions, including hydrofluorocarbons (HFCs), which are commonly found in refrigerators and air conditioners; limiting methane emissions from natural gas production; and increasing energy efficiency from industry and home appliances.

Citing sources familiar with White House discussions, the Washington Post reported this week that the administration is indeed considering proposing emission-restricting rules for existing power plants – a move that the newspaper added “would face fierce corporate opposition but is among the top goals of environmentalists.”

The Post also reported that the “EPA is due this spring to issue final carbon-emission regulations for new power plants, using powers under the Clean Air Act.”