How hot is it? From Turkey and Tulia to Houston and Galveston, record heat 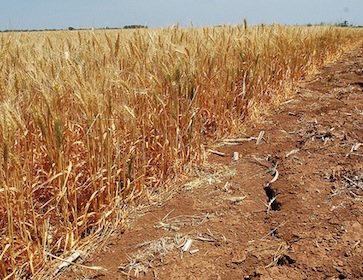 Texas AgriLife Extension Service says wheat crops are expected to be severely reduced or wiped out in most parts of Texas by the 2011 drought.

Johnny Carson started it, as far as we know – the late-night comedy tradition of “it’s so hot” jokes. David Letterman, Jay Leno and others have kept it going.

Here’s Leno, with a recent variation on the time-honored theme: “It was so hot in California today that Arnold Schwarzenegger’s clothes were out on the lawn setting themselves on fire.”

We’re not above trying our hand at an all-American joke formula at TCN Journal, so here goes: It’s been so hot in Texas lately [dramatic pause] that even some diehard climate change skeptics may be having second thoughts about scoffing at Al Gore.

OK, maybe we’re not ready for late-night joke-writing yet. Or will ever be ready. Levity aside, however, no one can deny it has been mighty hot – and dry – in the Lone Star state of late.

How hot and dry has it been (to paraphrase Carson’s audiences, who chanted just such a set-up line for the pre-Leno Tonight Show host’s punchlines)? Well, it’s been so hot and dry that all manner of records have been crumbling – last month was Texas’ hottest June on record, for example – as a pair of federal and state reports recently described.

The same report quoted the Texas state climatologist (and A&M professor of atmospheric sciences) John Nielsen-Gammon on the reasons for the extended run of extremely hot and dry conditions across the state:

The primary cause of the drought is the lingering La Nina in the Pacific, but we don’t know for certain if climate change is affecting rainfall one way or the other.  What we do know is that temperatures are a degree or two warmer with climate change so the drought is worse than it would otherwise be.”

(Nielsen-Gammon wrote in a recently published book from the University of Texas Press, The Impact of Global Warming on Texas, that climate models indicate temperatures in the state will probably keep rising in decades ahead, with related increases in water demand and evaporation making it likely there will be increased stresses on both environmental and human water systems.)

Here are some of the Texas-centric and related details from the National Oceanic and Atmospheric Administration’s State of the Climate report for June:

According to the release from the A&M College of Geosciences:

Illustrating just how warm a June it was for the country at large, meteorologist Steve Scolnik analyzed NOAA’s statistics and reported on his Capital Climate blog that the 2,706 daily high temperature records during the month exceeded daily low records by an “incredible” ratio of 10.8 to 1.

Since the preceding June, daily high records have exceeded daily low records in every month but one – last December, Scolnik reported. (Daily high and low records are records for that date. The great majority of these are not all-time records.)

[Disclosure: The Houston Advanced Research Center, which publishes Texas Climate News, commissioned the new, updated edition of The Impact of Global Warming on Texas, as it did the first edition, published in 1995. TCN editor Bill Dawson wrote the introduction to the new edition.]