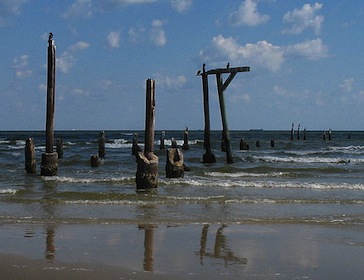 By Audrey White
The Texas Tribune
GALVESTON — From his 18th-floor law office, Buddy Herz, the head of the Galveston Housing Authority and a lifelong resident of this city, can point out how his view has changed since Hurricane Ike slammed into the island in 2008.

He identifies a patch of grass where a public housing complex once stood. A few blocks over is the University of Texas Medical Branch, which was heavily damaged but is now a symbol of the city’s resurgence.

“It’s a lot cleaner today than it was before Hurricane Ike,” Herz said. “The town is much smaller, so the business opportunities are much fewer unless you’re in tourism, medicine or construction.”

Ike was directly responsible for at least 103 deaths, 17 of them in Texas. The storm caused more than $50 billion in damage, making it what probably was the costliest hurricane ever to hit the state, according to the Governor’s Commission for Disaster Recovery and Renewal.

Nowhere was Ike’s impact more evident than on Galveston Island, which had not seen such devastation since the hurricane of 1900. Eighty percent of the city’s homes and almost all of its operating infrastructure were damaged by Ike’s high winds and devastating flooding. The city has about 48,000 residents today, compared with 57,000 before the storm.

Still, many city leaders remain optimistic and are banking on rebuilding efforts to ensure that Galveston will be ready for any future natural disaster.

“We are still dealing with Ike every day,” said Brian Maxwell, Galveston’s the assistant city manager. “We are trying very, very hard to not just fix things. We want our community to be sustainable should we have another major hit from a hurricane.”

Maxwell declined to comment on the city’s legal fight with the Texas Windstorm Insurance Association, or TWIA, the embattled wind damage insurer of last resort for Texas coastal residents. The city is seeking millions from TWIA, including up to $3 million, the policy limit, to repair City Hall. Maxwell said residents were struggling to recoup money from TWIA as well. But TWIA’s liabilities exceed its assets by $183 million. The insurer It has paid billions in claims to Texas homeowners and millions more on lawsuits related to mishandled claims.

Legislators, including state Rep. Craig Eiland, D-Galveston, say they are working to reform TWIA. Eiland — an attorney who has made hundreds of thousands of dollars representing property owners with claims against TWIA —  said that overhauling the financing model and the insurance adjuster process are crucial to making sure that the agency’s failures do not prolong recovery after another hurricane. Improving TWIA will help protect Galveston residents, especially those with low incomes, he said.

“It’s the people that don’t have the capability to just finance repairs and reconstruction straight out of their pocket that were most impacted by TWIA and, to a lesser extent, the other insurance companies,” Eiland said.

Critics have said that the city has been too slow to rebuild public housing destroyed by the storm. Amid changes to program oversight and disagreement over the type of public housing to build, the Galveston Housing Authority has rebuilt only 40 of the 569 public housing units it lost.

The release of at least $105 million in federal recovery aid to Galveston was held up this month by the Texas General Land Office because of the issue. And the office threatened to force the city to reimburse aid already distributed if it did not promptly move forward to rebuild the housing.

The City Council and the Housing Authority recently approved a housing plan in line with the land office’s wishes, and the authority is to begin rebuilding the housing in the form of mixed-income apartment buildings that will include 51 percent public housing units and 49 percent market-rate units.

Many Galvestonians preferred a system relying primarily on vouchers to “deconcentrate poverty and help the poor,” Herz said. “But that is not to be. We will live with what we have to live with.”

The $105 million is being delayed until the housing authority begins construction of the units, said Jim Suydam, a land office spokesman. The authority and the land office should break ground on public housing within about six months, Herz and Suydam said.

Peggy Paul, a Galveston school district employee who grew up on the island, hopes she can finally return home. She used public housing vouchers to move to small towns near Galveston when she could not find public housing on the island after Ike. She said her frustration with the city grew as public housing faced continued delays and she experienced problems as a tenant in other towns. For example, one landlord accused her of not paying rent, which led to a legal fight that ultimately cleared her.

“I had abuse by landlords. I had theft,” Paul said. “And the city is playing politics with my life.”

But recovery is moving rapidly in other parts of the city. Leaders at the UT Medical Branch said they were rebuilding an even better medical school and hospital after the storm flooded most of the facilities and put much of the hospital, which includes a trauma center and one of the nation’s top burn centers, out of commission for up to four months. David Callender, the medical branch’s president, said the administration maintained the vision it had before Ike.

“We went forward with much of the pre-Ike goals, just on a different timeline,” Callender said. Efforts at the school to mitigate the impact of future storms range from extensive and expensive — using durable materials like concrete and fiberglass instead of wood and metal — to simple, like placing electrical outlets higher along walls.

The school says it has a statewide economic impact of about $4 billion and supports 26,000 jobs. A new hospital will be ready to receive patients in 2016. The rebuilding of the UT Medical Branch is a victory for the island and the state, Eiland said.

City officials are proclaiming infrastructure improvements, too. A new water treatment plant and sewer system are to be built to withstand a Category 5 hurricane. First responders have developed new procedures and bolstered emergency response equipment and facilities, Fire Chief Jeff Smith said. And the tourism industry is stronger than ever, officials and residents said.

Maxwell, the assistant city manager and a fifth-generation Galvestonian, said he “wouldn’t trade our island’s future with anyone’s.”

“Until you’ve been through a recovery during these modern times, you can’t plan for it all,” he said. “We probably won’t get hit like that for another 50 to 100 years, but if we are, we’re probably better prepared than anyone else to take it.”

This article originally appeared in The Texas Tribune at http://www.texastribune.org/2013/04/26/galveston-still-healing-5-years-after-hurricane-ik/. Based in Austin, the Tribune is a non-partisan, non-profit media organization that promotes civic engagement and discourse on public policy, politics, government and other matters of statewide concern.