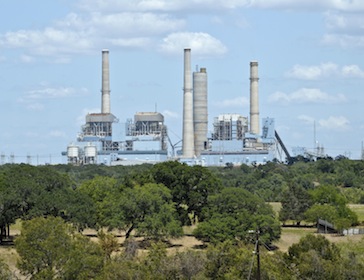 The Fayette Power Project, a coal-fired plant operated by the Lower Colorado River Authority in Fayette County in Central Texas. The plant's cooling water comes from Lake Fayette, a 2,400-acre reservoir that the LCRA says "provides a variety of recreational opportunities and some of the state's best freshwater fishing."

This article originally appeared in The Texas Tribune at http://trib.it/ou3QdR.

If the drought in Texas continues well into next spring and summer, some power plants could be forced to stop operating, the state grid operator said.

“If we don’t get any rain between now and next summer, there’s potentially several thousand megawatts of generation that wouldn’t be available and would be affected,” said Kent Saathoff, an official with the Electric Reliability Council of Texas, the grid operator, in an interview last Thursday. (To provide context, ERCOT manages about 84,400 megawatts of generation capacity. Also, the coal-plant closures and changes announced earlier this week by the power generator Luminant amount to 1,300 megawatts.)

So far, Saathoff said, “it’s not a major issue.” But if no rain falls by spring, “we will be very concerned at that point,” he said.

Nuclear, coal and natural gas plants need vast amounts of water to cool equipment — which is why the South Texas Project, for example, has large reservoirs on-site. Much of the water used by power plants is discharged back into ponds or rivers after it is used for cooling.

This summer, one large plant had to reduce operations at night so that it could operate fully during the day when the power is most needed, Saathoff said. There were two issues: extreme heat made it harder for the water to cool down enough to be discharged, and the drought reduced the volume of cooler water available in a reservoir that would have helped reduce the temperature of the discharged water.

A number of plants, Saathoff said, are already “piping in water from nearby rivers that they may not normally get water from,” especially in East Texas near the Trinity and Sabine rivers.

“Unfortunately, you can’t manufacture water,” Saathoff said, adding that the plants that have been reported as being “in the most jeopardy,” should the drought continue, include a coal plant and several gas plants. One option for mitigating the situation, he said, could be to revive mothballed power plants to help handle the demand on the electric grid.

How are individual plants preparing? “We have the water we need for this year, and well into next year,” said Dave Knox, a spokesman for NRG, a large electricity generator. He said his company will be “working with the river authorities to ensure that we have the water supply we need.”

Clara Tuma, a spokeswoman for the Lower Colorado River Authority, a major water supplier, said that power plants and other large water customers, like cities, could be subject to mandatory cutbacks if the drought gets bad enough. Right now, she said, “There is no mandatory curtailment for LCRA customers at this time, but if the drought continues it is likely we will reach the stage of the water management plan where cutbacks are required.”

The LCRA also operates some power plants of its own. Said Tuma: “LCRA anticipates it will have sufficient water to operate its power plants throughout the drought, and we do not anticipate a reduction in our planned power production because of water availability.”