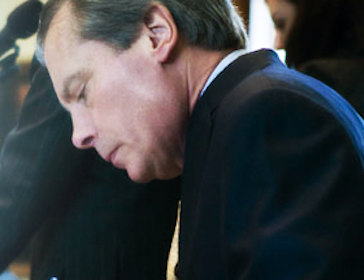 Asked by Texas Climate News about Dewhurst’s reported interest in the possibility of phasing out the use of coal at some older power plants, his office provided this statement Thursday:

Lt. Governor Dewhurst is interested in gradually increasing the use of cleaner-burning, Texas natural gas through market-based incentives, so we can continue to improve air quality, create more Texas jobs, increase our energy independence and provide for the future energy needs of our growing population.  Contrary to recent news reports, Lt. Governor Dewhurst is not advocating for closing down coal plants overnight. In order to meet our current energy demands and fuel our economy, Texas will continue to rely on the use of coal, wind, and nuclear and solar power, in addition to natural gas, as part of our diversified energy portfolio.

Besides reducing health-threatening air pollutants such as nitrogen oxide, replacing coal with natural gas in meeting some of Texas’ growing electricity demand would also cut the state’s nation-leading emissions of carbon dioxide, the principal human-generated greenhouse gas that atmospheric scientists say is heating and changing the earth’s climate.

Dewhurst’s office did not specify which news reports it took issue with, but a blog item posted on the Dallas Morning News’ website on Thursday did have this scary headline suggesting a possibly abrupt change: “If Dewhurst shuts down old coal, he could shut out the lights.”

The Morning News article said it was seeking direct comment from Dewhurst’s office. Citing an earlier article in the Austin-based Texas Energy Report about Dewhurst’s focus on the coal issue, the Dallas newspaper said it reported that the lieutenant governor had indicated he was “considering incentives to get power companies to either upgrade or replace old coal plants with natural gas.”

But in contrast to the insistence by Dewhurst’s office that he is only studying ways to reduce coal use gradually, the Dallas newspaper’s blog item largely focused on the possible negative ramifications of a quick shift:

Thirteen coal-fired power plants in Texas were built before 1980. Shut those down without immediately replacing the full capacity, and the lights go out.

Without delving into specifics, Lt. Gov. David Dewhurst said he plans to push for “regulatory and fiscal incentives” to encourage the operators of 1970s-era coal-fired generating plants to either retrofit or replace them with units that would run on natural gas.

Speaking with the reporters at his semi-annual press luncheon, Dewhurst also said he’s exploring incentives that would encourage public and private fleets to convert to engines that burn compressed natural gas and liquefied natural gas.

The goal, he said, is to “use more domestic Texas energy” as a way of meeting federal clean air standards and to lessen Texas’ carbon footprint.

No one disputes that Texas continues to face significant challenges in meeting the federal Clean Air Act’s smog standard in metropolitan regions including Houston and Dallas-Fort Worth – a limit that the Obama administration may lower later this year.

But Texas Energy Report’s reference to Dewhurst’s interest in reducing the state’s “carbon footprint” – its emission of carbon dioxide, which is of concern only as a climate-altering gas – could signal at least a tactical difference with other top state officials on the climate issue.

Gov. Rick Perry, Attorney General Greg Abbott and Chairman Bryan Shaw of the Texas Commission on Environmental Quality have all strongly criticized the conclusions of most climate scientists – including all of them on the Texas A&M University faculty – that emissions of CO2 and other greenhouse gases are hazardously altering the planet’s climate system.

Texas, alone among the 50 states, has refused to implement the U.S. Environmental Protection Agency’s new regulations requiring emission permit limits for greenhouse gases at new or significantly altered industrial plants such as power plants and oil refineries. The state is challenging the regulations in court, and the EPA has moved to take over the issuance of greenhouse permits from the TCEQ – an action decried by state officials including Dewhurst in his inaugural address on Tuesday.

The EPA’s climate regulations could be halted in the courts or by Congress, where some Democrats have joined Republicans in trying to block them. But if they do continue to be phased in – a process that began earlier this month – they could prove to be particularly challenging for operators of older coal-fired plants, especially if they are coupled with new nitrogen oxide limits to reduce ozone, the main ingredient in smog.

With air quality issues serving as motivation, Colorado legislators passed a law last year that has been cited as a possible model for other states seeking to reduce coal use in the production of electricity. An item in the Climate Law Blog of Columbia University’s law school described the statute:

Colorado’s Clean Air-Clean Jobs Act requires utilities to create plans that reduce [nitrogen oxide] emissions by 70 percent at a specified portion of their coal-fired electricity generation facilities by the end of 2017. It allows utilities to make use of many different methods to achieve those reductions, but encourages and incentivizes the replacement of coal-based generation with natural gas. Utilities must seek approval for their plans from state agencies, and must work closely with those agencies in designing such plans.

The Colorado Independent reported that this measure “was endorsed by [Colorado’s] natural gas industry and environmentalists but blasted by the coal industry and some Republican politicians.”

When Colorado’s Democratic Gov. Bill Ritter signed the law, the Denver Post reported that a Republican supporter of the statute, the state Senate’s minority leader Josh Penry, said it would “increase the demand for Colorado natural gas” and should have been called the “Clean Air, Clean Jobs, More Drilling Act.”

Dewhurst’s so-far limited public comments on replacing some of Texas’ coal use with natural gas have already earned praise from Texas environmentalists.

In a letter published Monday by the Waxahachie Daily Light, representatives of three groups noted that older coal-fired plants in Texas will confront the necessity of expensive upgrades to continue operating under new federal regulations:

The SEED Coalition, Sierra Club and Public Citizen look forward to working with Lt. Governor Dewhurst and the Texas Senate on a plan to transition carefully away from our oldest and dirtiest coal-fired power plants toward other sources of energy, including energy efficiency, renewables and renewable storage, natural gas and demand response.

We believe it is time to consider this transition given the cost of impending air and water regulation retrofits needed to continue to operate these old inefficient plants. Dewhurst’s plan is responsible environmentalism which avoids needless upgrades on inefficient plants that are likely to retire soon.

The Electric Reliability Council of Texas (ERCOT), which operates the power grid in the state, reported last week that coal had replaced natural gas in 2010 as Texas’ principal source of electricity. Reuters reported:

Coal plants supplied 39.5 percent of the power used in Texas last year, up from 36.6 percent in 2009 as four new coal units were completed.

Opposed by critics including environmentalists and a coalition of municipal governments including Dallas and Houston, Perry has consistently pushed for TCEQ approval of new coal-fired plants during his tenure. At one point, he ordered the environmental commission to “fast-track” permit decisions on some applications, but that directive was overturned by a district court.