The two Senate candidates acknowledge climate change is a threat. GOP incumbent Cornyn calls for research, Democrat Hegar for more renewable energy. Both distance themselves from their parties’ presidential nominees. 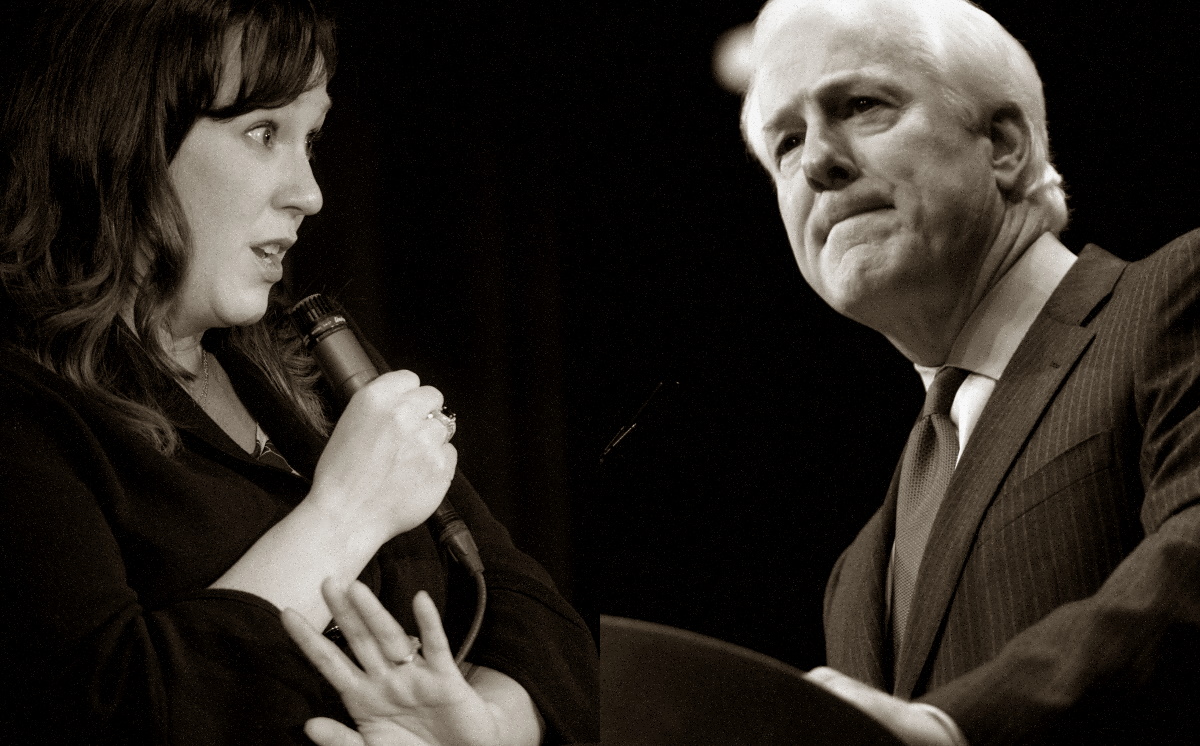 The results of the upcoming election, both for the presidential and congressional races, will directly impact how the federal government confronts the problem of climate change. Whoever wins the Texas Senate seat will need to balance constituent concerns over this issue and the energy-dependent Texas economy.

Both John Cornyn, the Republican incumbent, and his Democratic challenger, MJ Hegar, acknowledge climate change is a threat. Cornyn’s approach is centered on more research and no new regulation, while Hegar, who has been endorsed by environmental groups, would like to expand renewable energy production.

“She has made it clear that climate change is one of the top reasons she decided to run for the U.S. Senate and believes that Texas can be the leader of our clean energy future,” the League of Conservation Voters said in a press release announcing their endorsement.

The environmental lobby group gave Cornyn a 5 percent lifetime score on its National Environmental Scorecard because of his “anti-environment” voting record during his time in Congress, the group said in the press release.

Discussing climate change in Texas can be a political minefield because of the state’s reliance on the oil and natural gas industry. The industry has a direct impact on the state’s economy, and it’s one of the few states in which all aspects of oil and gas, from wells through pipelines to refineries – the industry calls them upstream, midstream and downstream operations – have a presence.

Jones has conducted voter polls in the state, and while there is a lot of support for climate change policies across Texas, people do not necessarily base their votes on the issue, he said. On the other hand, he has found that a smaller subset of people whose livelihoods depend on oil and natural gas may vote for or against a candidate if they feel their jobs are at stake.

Last year, Cornyn told reporters that the days of ignoring climate change are over, but he also ruled out any support for new taxes or regulation to combat it, and instead supported more research. Even that stance, however, put some distance between the senator and President Donald Trump, who has scoffed at climate science and strenuously rolled back regulations to limit climate-disrupting pollution.

The three-term incumbent is favored to defeat his Democratic opponent, according to the poll-aggregating and outcome-projecting website FiveThirtyEight.com, and another prominent model-based forecasting project by The Economist.

If Cornyn wins reelection, he will be active in congressional maneuvers to delay the shift from fossil fuels to climate-friendlier energy sources, Jones predicted.

“I think you’ll see Cornyn doing a rear-guard effort to slow the transition away from fossil fuels as much as possible while not being in the camp of climate-change deniers,” he said. “That train has already left the station.”

The largest energy companies, referred to as the majors, are already moving toward renewables, including Shell and BP, Jones said.

He expects Cornyn to try to slow the transition to a post-fossil fuel energy future to give Texas as long as possible to take advantage of its oil and gas resources and the infrastructure that has been built over time to benefit from those resources, particularly the petrochemical industry.

In 2019, Cornyn introduced legislation called the LEADING Act, to incentivize the research and development of carbon-capture technology for natural gas and to support energy innovation.

“That’s a form of the rear-guard effort,” Jones said. “Let’s study it for a few more years because that buys us more time.”

If former Vice-President Joe Biden wins the presidential election and Democrats win the Senate, there won’t be as many options for Republicans. Jones expects Republican senators like Cornyn to work with Democrats from states like New Mexico and West Virginia – places that have a strong fossil-fuel profile or are more conservative.

“You would try to work with moderate Democrats who are moderate on energy policy – moderate because either they are true moderates or moderate because production is an important source of revenue for their state, like New Mexico,” he said.

Cornyn’s only real hope for influence during a Biden administration in a Democratic-controlled Senate would be to craft legislation that can gain the support of moderate Democrats, as a way to hinder the transition away from fossil fuels, Jones said.

Biden didn’t endorse the Green New Deal, a conceptual framework that aims to combat climate change by creating green jobs and business opportunities as well as cutting emissions through targeted government investments. His own climate and energy plan’s scope is narrower, but informed by the Green New Deal.

Biden promises a 100-percent decarbonized power sector by 2035 and a net-zero economy by 2050. Cornyn’s effort would be centered on pushing a decarbonization target date back, Jones said.

If Trump wins a second term, Jones suspects any climate-related bills that might pass would be more window dressing than actual policy changes to allow Republicans to tell their constituents that they are working to curb climate change.

Hegar wants to set aggressive goals for expanding renewable energy, investing in renewable energy manufacturing, and updating the electric grid, according to her campaign website. Both the Sierra Club and the League of Conservation Voters have endorsed Hegar.

If Hegar wins the election, she might function in the way that Heidi Heitkamp, the former Democratic senator from North Dakota, did on energy issues, Jones said.

“She would play the role of Heitkamp in that she would be a Democrat that would be loath to vote for something that would severely negatively impact the oil and natural gas industry in Texas,” Jones said. “She may be willing to support a gradual change, a move away from oil to natural gas as a transition fuel. That’s something that moderate Democrats often push. I don’t think Democrats could count on her to be a rock solid yes vote, the same way they could rely on a Diane Feinstein.”

On Sept. 22, Hegar held an online discussion about the environment. She brought up the need to address climate change while keeping Texas a leader in energy.

Georgette Reeves, an environmental consultant to oil and gas companies and a speaker at the event, said that while Texas is able to produce electric power through renewable resources such as wind, solar and hydro, there will be a continued demand for oil and natural gas. Domestic oil and natural gas are better for the environment due to U.S. environmental regulations and present less risk because they have to be shipped on barges, she said.

Climate-action proponents vigorously reject such arguments, but Hegar responded that she totally agreed and pivoted back to discussion of renewable energy.

“I just want to reiterate that I want Texas to continue leading in the energy industry,” Hegar said. “Globally, we’re trending toward renewable energy, and Texas is going to fall behind if we don’t have leaders that can see the writing on the wall and do the work it takes to continue leading in the industry without doing it in a way that isn’t moving the burden, any burden, like a tax burden that people try to use to incentivize behavior, to the middle class and lower middle class.”

If she wins, Hegar will aim to balance the economy and environment as a senator from Texas, Jones predicted. She can’t alienate her party’s progressives but if she is tied to the Green New Deal, she will lose the election, he said.

Indeed, Hegar is not endorsing a certain year or years as goals for an energy transition, as both Biden and Green New Deal have done.

“MJ believes we need aggressive investment to move toward renewable energy, but has not committed to a specific timeline,” said Samantha Paisley, her campaign’s press secretary.

Nushin Huq is a contributing editor of Texas Climate News. She is a Houston-based independent journalist focused on covering energy and the environment. Prior to freelancing, she was the Houston correspondent for Bloomberg BNA, covering, among other beats, state environmental regulation in Texas, Louisiana and Mississippi. She also has experience covering the electricity markets.

Image credits: MJ Hegar by Jay Godwin and John Cornyn by Gage Skidmore, both via Flickr.