After two years of effort, San Antonio finally has a climate action plan 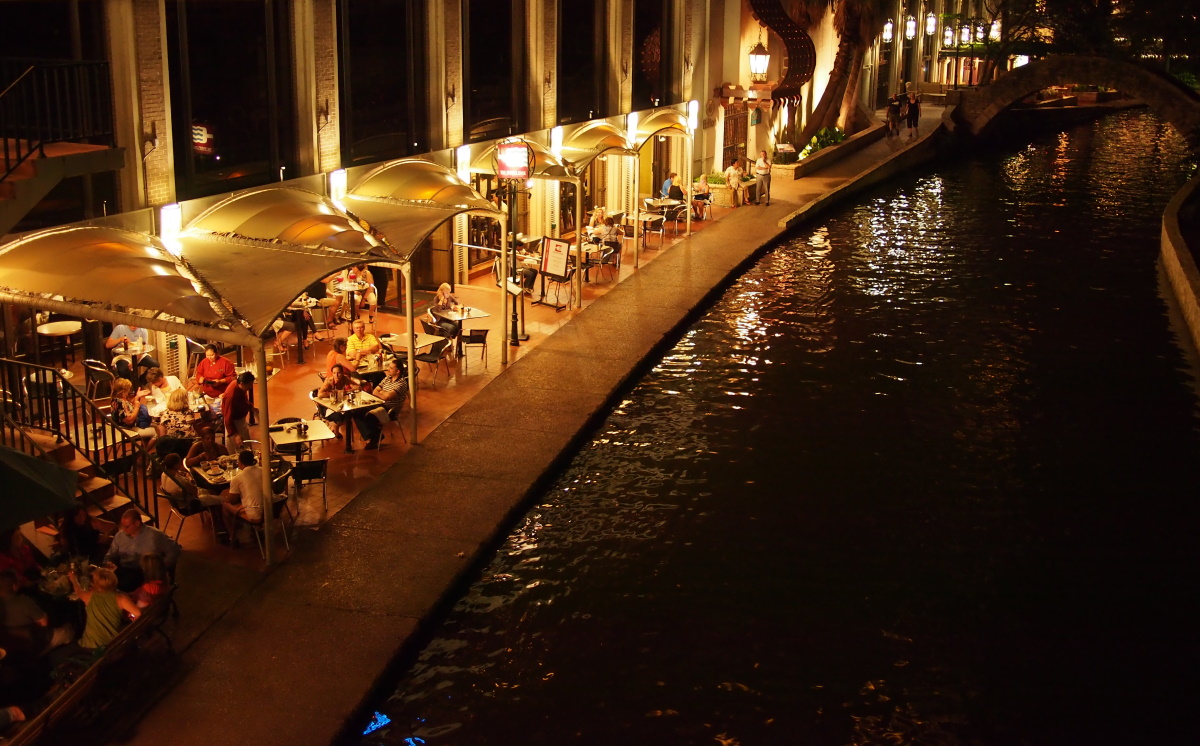 An evening on the River Walk in San Antonio

City officials in Texas are grappling with the challenges posed by a changing climate with multifaceted climate action plans. This article about San Antonio is the second installment in an occasional series on the promise and limitations of such plans.

It took two years, but the ideological tug-of-wars, copious input from business and community groups, and even rowdy street protests finally came down to the one thing that all sides had been awaiting: a vote on San Antonio’s climate action plan.

On Thursday, Oct. 17, the San Antonio City Council approved the Climate Action & Adaptation Plan (CAAP), which provides a framework for the city to achieve carbon neutrality by 2050 primarily through cutbacks in greenhouse gas (GHG) emissions. The plan calls for a 41 percent reduction by 2030, 71 percent by 2040 and 100 percent by 2050. San Antonio Mayor Ron Nirenberg characterized the protracted effort as “not an easy undertaking” but said he is committed to implementing every item the plan puts forward.

“The Climate Action & Adaptation Plan moves San Antonio toward a stronger, more sustainable and competitive future by charting a course that reduces greenhouse gas emissions,” Nirenberg told Texas Climate News. “The climate plan is a starting point, the easy part. It is a roadmap for the future, not a set of mandates. Setting mitigation goals and outlining adaptation methods will launch us on the pathway forward.”

The council vote was 10 to 1. During the plan’s evolution, a small band of council members had expressed a variety of concerns about it, from the cost of implementation to doubts about climate science itself. In the end, District 10 councilman Clayton Perry stood alone in voting against the measure, citing its unquantified expenses and its potential to be a drag on the local economy.

“The earth’s climate is changing, and I strongly believe we should all do our part to protect the environment,” Perry said in a statement. “My opposition to the CAAP has never been about the issue of climate change; rather, it has always been about the negative economic impacts to our community of implementing a plan with no set bounds.

“Although I voted against adopting the CAAP today, I will continue to ask questions and respectfully push back to ensure the CAAP can be founded in data, questions can be answered on the record, costs can be flushed out and potential problems can be addressed head-on.”

Nirenberg insists that cost data will be forthcoming. “Most estimates or deadlines may vary drastically as technologies improve or as we approach the actual implementation of some of these policies and strategies,” he said. “This is a springboard for specific policies to help the San Antonio region address climate change. The CAAP is strategic and flexible. An intense cost-benefit analysis will be conducted on all future decisions to implement portions of the plan.”

Concerns like Perry’s have added a reality check and an alternative voice, but also complexity to the process of getting the San Antonio plan up and running. Perry himself has repeatedly professed his conviction that the climate is changing, but he has also suggested that it’s always been changing, with or without human input. His position is not so out of step with much of the rest of Texas, where the world scientific community’s strong consensus on the causes of global warming – that pollution from humans’ use of fossil fuels is the “dominant” factor – is not universally embraced, not always understood and sometimes not even a part of people’s awareness.

Greg Harman, a Sierra Club organizer and a member of the CAAP steering committee that helped create the plan, said a basic consciousness-raising about environmental issues has been needed to get some stakeholders on board with the plan. “The level of understanding of the climate issue – this is like brand new stuff for some people in positions of political leadership,” he said. “It’s just not something we talk about in San Antonio, and it’s a shame.”

The first version of the plan bowed in January 2019 but ran into headwinds from the business community and was revised to loosen objectives for fossil-fuel use. Cost estimates in earlier versions of the plan were removed, as Perry noted. Environmental activists viewed many of the revisions as setbacks, asserting that the plan was becoming too diluted to produce any meaningful effect. The back and forth continued, and a vote was delayed twice before City Council passed the final version – one that generated only lukewarm support from both the pro-business and pro-environment communities.

Municipal buildings will set the example, according to Nirenberg. “With citizen committee oversight, the city will be working to operate all municipal facilities on 100 percent renewable energy, retrofit older buildings to make them more energy efficient and measure the energy use of all municipal and large buildings in the city,” Nirenberg said.

But the Sierra Club, Climate Action San Antonio (a coalition of community groups) and other concerned citizens look at the CAAP and see an elephant in the room: City-owned CPS Energy’s J.K. Spruce Unit 2 coal-fired power plant.

Coal’s use in electricity production has been a major target for climate-action advocates for years because coal produces more atmosphere-warming carbon dioxide than other fossil fuels. But Spruce 2 is scheduled to remain in operation until 2060, or 10 years beyond the CAAP’s 100 percent carbon-neutral deadline. The facility, completed in 2010 at a cost of $1 billion, is outfitted with modern pollution controls to remove health-threatening emissions such as sulfur dioxide and nitrogen oxide. Even with those technologies, the Sierra Club’s Harman believes the plant’s operation for 40 more years is incompatible with the CAAP’s goals.

“CPS Energy funds the city to a large degree. They even paid for the climate action plan to be developed,” Harman said. “They also happen to be the largest climate polluter in the San Antonio region. So, while political resistance was to be expected, it was truly a feat of bureaucratic alchemy that our worst climate offender, the J.K. Spruce coal plant, was actually made to disappear in the plan’s pages. The polluter that pumps out 8 million metric tons of GHG annually is not named in the CAAP.”

CPS Energy is the principal supplier of electrical power and natural gas to San Antonio and outlying areas.

Though coal is referenced on only two of the CAAP’s pages outside of the appendix, Harman thinks public pressure will raise its profile. “Two years of community mobilization targeting our elected leaders ensured that Spruce was the center of attention on the day of the climate plan’s vote – as it will be every day going forward as we work together to put the goals and values of this plan into action,” he said.

The CAAP also lays out “adaptation strategies” to deal with the consequences of climate change such as increased health risks from heat exposure, exposure to ground-level ozone, increased wildfires and impact on infrastructure. The adaptation strategies include strengthening public health systems, increasing infrastructure resilience, enhancing emergency-management and community preparedness, and promoting, restoring and protecting green infrastructure and ecosystems.

A climate action plan was scarcely a blip on San Antonio’s radar until 2017, when President Donald Trump announced that the U.S. would part ways with 186 other countries and withdraw from the Paris Climate Agreement. The Paris agreement’s top goal is to keep the global average temperature increase to well under 2 degrees Celsius, compared to preindustrial levels, and ideally limit the increase to 1.5 degrees. Its success depends heavily on curbing heat-trapping GHG emissions worldwide. Climate scientists calculate that holding temperatures below the 2-degree threshold will buffer or prevent a cascade of environmental catastrophes, including extreme weather and rising seas that could displace tens of millions of coastal residents around the world.

Shortly after the president’s announcement, the San Antonio City Council passed a resolution committing the city to the Paris Agreement’s goals. In doing so, San Antonio joined 406 other American municipalities that approved similar measures. In Texas, four of the state’s five largest cities – Houston, San Antonio, Dallas and Austin – are pursuing climate action plans. Fort Worth, the fifth-largest, is implementing an “Environmental Master Plan” – not a climate action plan per se.

As if on cue, less than a month before the San Antonio City Council voted on the CAAP, the worldwide Global Climate Strike initiated by Swedish teenager Greta Thunberg brought sign-carrying crowds onto Alamo City streets, with protesters demanding elected leaders do something about global warming.

Whether or not the Sept. 20 demonstration swayed council votes, San Antonio ended up with a climate action plan – one that evidence suggests will continue to evolve and spark more controversy.

John Kent, a contributing editor of Texas Climate News, is a Fort Worth-based writer specializing in transportation and environmental topics. He last reported for TCN on Texas cities’ adoption of battery-electric buses.