Crossing a “tipping point” threshold causes large, potentially irreversible changes in the Earth system. A study found a “significant likelihood” that several thresholds will be crossed if warming exceeds 1.5 C. 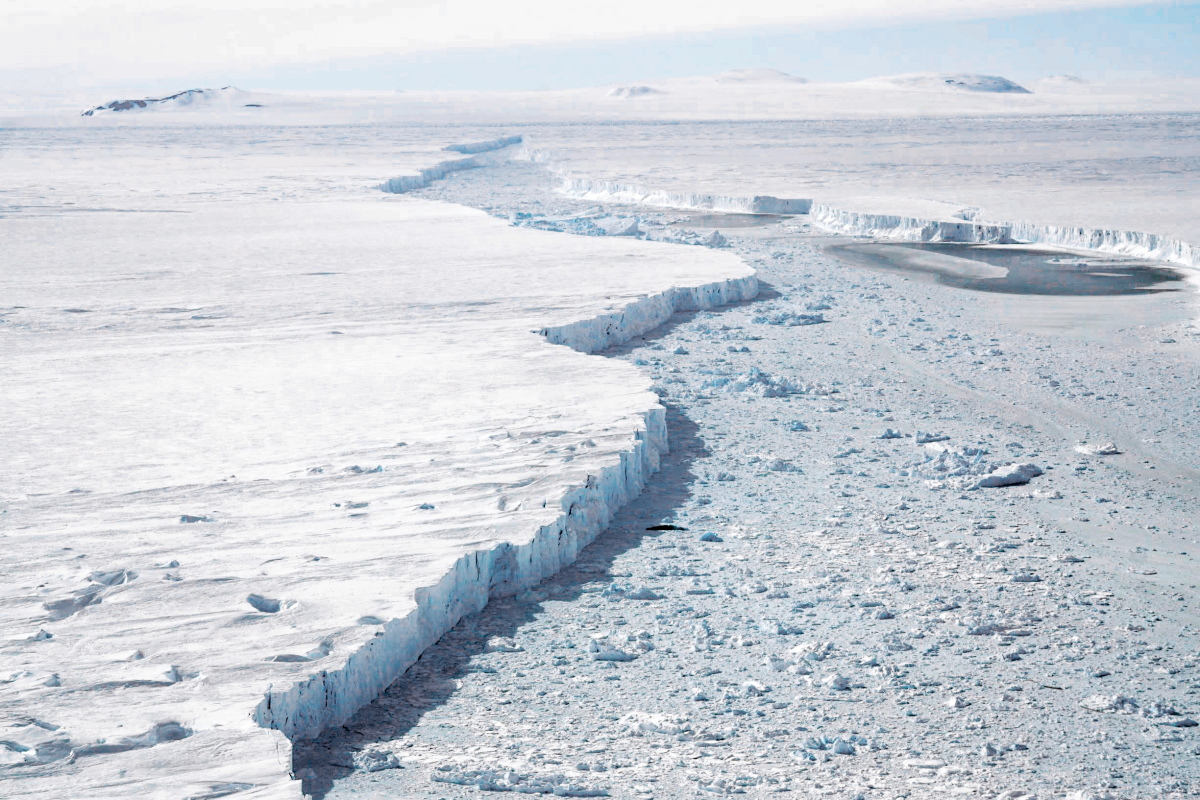 There is a “significant likelihood” that multiple “tipping points” will be crossed if global temperatures exceed 1.5 degrees Celsius above pre-industrial levels, new research suggests.

Tipping points are thresholds that, if crossed, trigger large-scale and potentially irreversible changes in a particular part of the Earth system.

The research, published in Science, reviews hundreds of academic studies to provide an “updated assessment” of climate-related tipping points. The paper identifies 16 tipping “elements” in total and outlines the temperature thresholds, timescales and impacts of each.

The authors warn that rising temperatures may have already pushed the planet beyond a “safe climate state.” They find that five tipping elements – including the collapse of the West Antarctic ice sheet and abrupt permafrost thaw – are already within reach.

The study is “a welcome update to previous work on tipping points”, a scientist not involved in the research tells Carbon Brief, adding that it “paints a clear and stark picture of the challenges we will be facing in the coming years.”

As the planet warms, many parts of the Earth system are already undergoing large-scale changes. Ice sheets are shrinking, coral reefs are dying and rainforests are degrading.

Scientists warn that many of these systems are approaching a “tipping point” – a threshold that, once crossed, could cause a system – or “element” – to shift abruptly into a new state. For example, if the West Antarctic ice sheet tipping point is crossed, rapid melting will eventually cause the sheet to collapse.

The authors of the new study assessed hundreds of scientific papers to outline the current state of knowledge around tipping points and their temperature thresholds.

The map below shows the key findings of the paper. On the map, yellow shading indicates tipping points related to the cryosphere, orange the biosphere and red the atmosphere and ocean. Yellow circles indicate tipping points that could be crossed at less than 2 C warming above pre-industrial levels, orange squares show 2-4 C and and red triangles greater than 4 C. 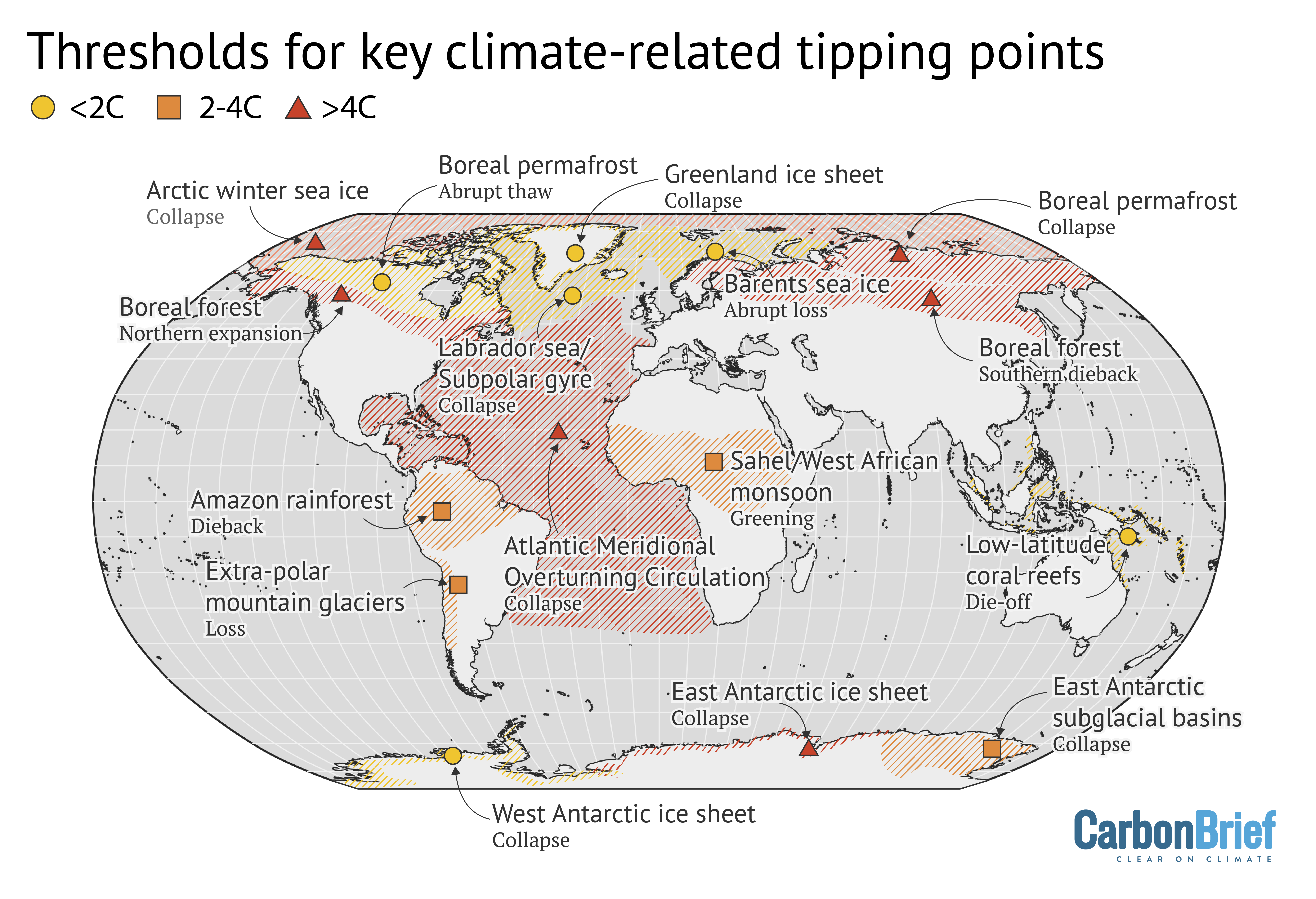 The location of the Earth’s tipping points and when they are likely to be crossed. Credit: Map by Tom Prater, based on McKay et al (2022). Carbon Brief Ltd, CC BY-NC-ND 4.0

Study lead author David McKay is an independent research consultant and visiting fellow at the University of Exeter’s Global Systems Institute. He tells Carbon Brief that a paper published in 2008, entitled “Tipping elements in the Earth’s climate system,” first “broke the ice” on tipping points research. The work helped to define the concept of tipping points and to “spur on that new field.” he says.

Since the 2008 paper was published, new tipping points have been proposed and existing ones have been questioned, the new study says. Ever-rising temperatures have pushed many systems closer to – and possibly past – their thresholds, it adds:

How tipping points are defined is still an ongoing process. While the idea is “really compelling,” McKay tells Carbon Brief, “when you actually try and scientifically define it, it actually gets a bit tricky, because it’s quite conceptual.”

Some scientists define tipping points as systems that change rapidly once a threshold is crossed. However, McKay points out that this definition would exclude processes such as the Greenland ice sheet – which “might take 1,000 years or more” to melt, but cannot be stopped if the threshold is crossed.

Instead, the new study emphasizes self-perpetuating change – whereby once the threshold is crossed, a feedback loop will keep driving it towards its new state even without any further warming. The new study also says that while tipping points are usually irreversible, this rule can be broken for “special case[s].”

The 2008 study identified nine climate tipping elements. In all, the updated assessment has expanded the list to 16 – including nine systems that affect the entire Earth system and a further seven systems that, if tipped, would have “profound regional consequences.”

The new study includes the collapse of various circulation systems – such as the Labrador sea convection – which were not mentioned in the 2008 study. Meanwhile, it omits several climate systems that were previously considered tipping points. For example, McKay says there is “pretty wide agreement” that Arctic summer sea ice does not have a tipping point, because ice loss is not considered to be self-perpetuating.

Sebastian Bathiany – a postdoctoral researcher at the Climate Service Centre in Germany, who was not involved in the research – tells Carbon Brief that removing some tipping points from the list “helps the community to move on and focus on those potential tipping points that have larger remaining uncertainty and potentially pose a larger risk.”

The authors assessed how many tipping points could be triggered at different levels of global warming. The upper half of the plot below shows the likelihood of triggering each tipping element at different temperature levels. Yellow indicates a low likelihood and red indicates a high likelihood, while the dotted line indicates a central estimate. 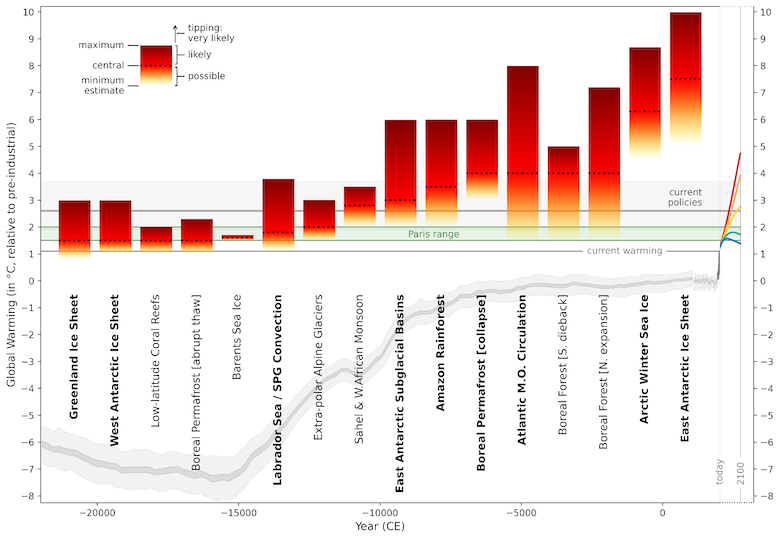 The authors find that human-caused warming of 1.1 C has already pushed five tipping elements into the “possible” range – including the collapse of the Greenland and West Antarctic ice sheets, which were possible from warming levels of 0.8C and 1.0 C, respectively.

Alex Robinson – an assistant professor at the Complutense University of Madrid and a guest scientist at the Potsdam Institute for Climate Impact Research – was not involved in the research. He tells Carbon Brief:

“I think we are getting very close to the tipping points for both the Greenland ice sheet and the West Antarctic ice sheet.”

McKay adds that a number of studies support the conclusion that the West Antarctic ice sheet is “close to or even over” the tipping threshold.

Bathiany tells Carbon Brief that the research is “more reproducible and transparent than some previous studies,” adding that it moves the field of tipping points research “in the right direction.”

However, he warns against misunderstandings of the main results. He tells Carbon Brief that the red and yellow bars in the figure above should not be interpreted as a “statistical assessment” of the likelihood of a tipping point being crossed, adding that “in my opinion, uncertainties in this field of research are still too large to make quantitative statements.”

“Climate model projections are highly uncertain and potentially unreliable regarding tipping points…Hence, the list of tipping point candidates and the uncertainty ranges of temperature thresholds will certainly change again.”

McKay tells Carbon Brief that the work is “inevitably subjective.” He adds that the study “is not a definitive systemic assessment” of tipping points, but is a good “first step.”

However, he notes that this assessment does not include the impact of “tipping cascades” – a domino effect in which one tipping point sets off another. The tipping thresholds for individual systems could be lowered if these interactions are accounted for, McKay tells Carbon Brief, adding that it is an important area for future work.

This paper is “a welcome update to previous work on tipping points” and “paints a clear and stark picture of the challenges we will be facing in the coming years,” Robinson tells Carbon Brief.

Richard Alley – a professor of geosciences at Penn State, who was not involved in the research, tells Carbon Brief that the study is “careful and thorough.” He adds that the work “highlights areas where additional research could be especially helpful to inform decisions by the public and policymakers.”

And Bathiany tells Carbon Brief that “the authors are right to call for urgent action,” adding that “serious, unbiased efforts to assess the nature and plausibility of tipping points should be intensified by the scientific community.”

Ayesha Tandon is the science journalist at Carbon Brief. She holds an MSci degree in natural sciences, specializing in climate science, from the University of Exeter. She previously worked at the U.K. Met Office as a climate science communicator.