The Inflation Reduction Act was just the first step. Two outcomes matter – how deeply U.S. actions slash domestic emissions and how effectively they cut clean technologies’ costs so other nations can slash emissions too. 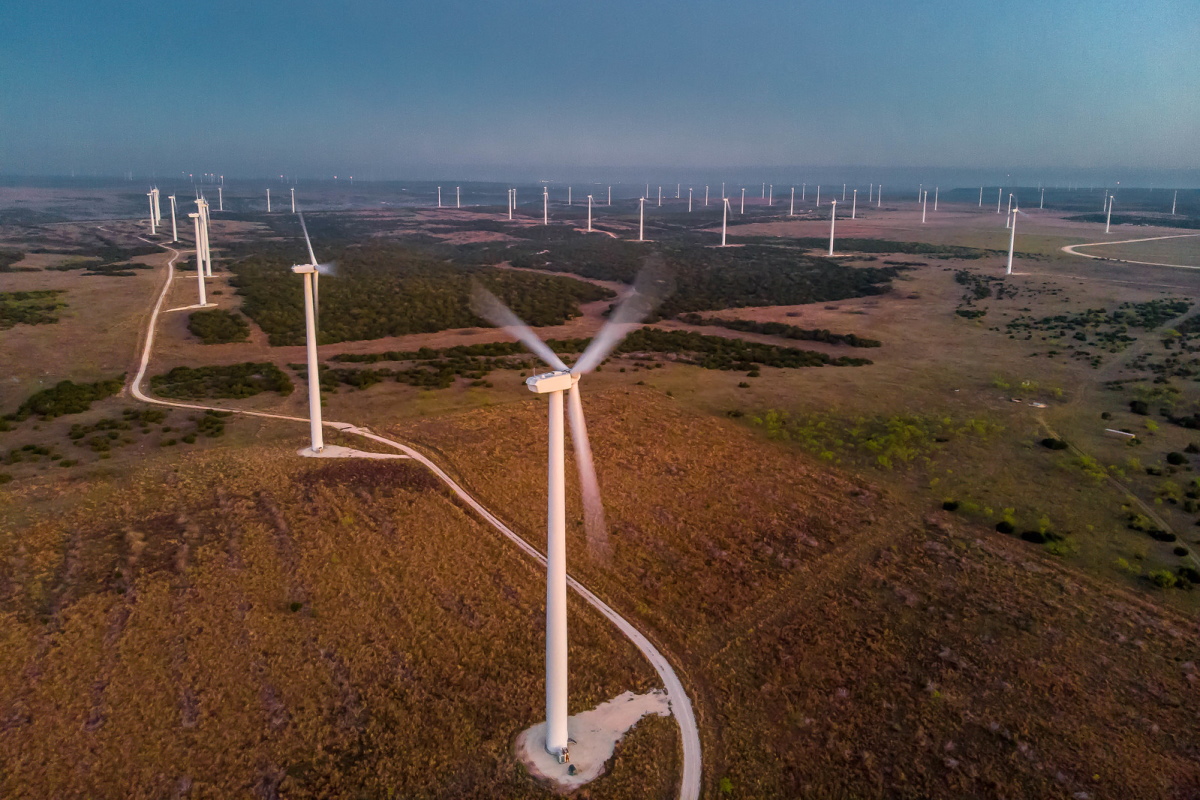 A windfarm at sunrise near Nolan, Texas. Daxis, CC BY-ND 2.0, via flickr

This article was originally published by The Conversation, a nonprofit, independent news organization that produces articles written by academic experts for the general public and edited by a team of journalists.

The new Inflation Reduction Act is stuffed with subsidies for everything from electric vehicles to heat pumps, and incentives for just about every form of clean energy. But pouring money into technology is just one step toward solving the climate change problem.

Wind and solar farms won’t be built without enough power lines to connect their electricity to customers. Captured carbon and clean hydrogen won’t get far without pipelines. Too few contractors are trained to install heat pumps. And EV buyers will think twice if there aren’t enough charging stations.

In my new book about climate solutions, I discuss these and other obstacles standing in the way of a clean energy transition. Surmounting them is the next step as the country figures out how to turn the goals of the most ambitious climate legislation Congress has ever passed into reality.

Two outcomes matter: how deeply U.S. actions slash emissions domestically, and how effectively they cut the costs of clean technologies so that other countries can slash their emissions too.

Various studies predict that the Inflation Reduction Act will cut U.S. greenhouse gas emissions to around 40% below their 2005 levels by 2030. That’s a cut of roughly 1 billion tons per year, far more than any other U.S. legislation has achieved.

But it still leaves a roughly 10 percentage point gap from President Joe Biden’s target of at least a 50% reduction in emissions by 2030. 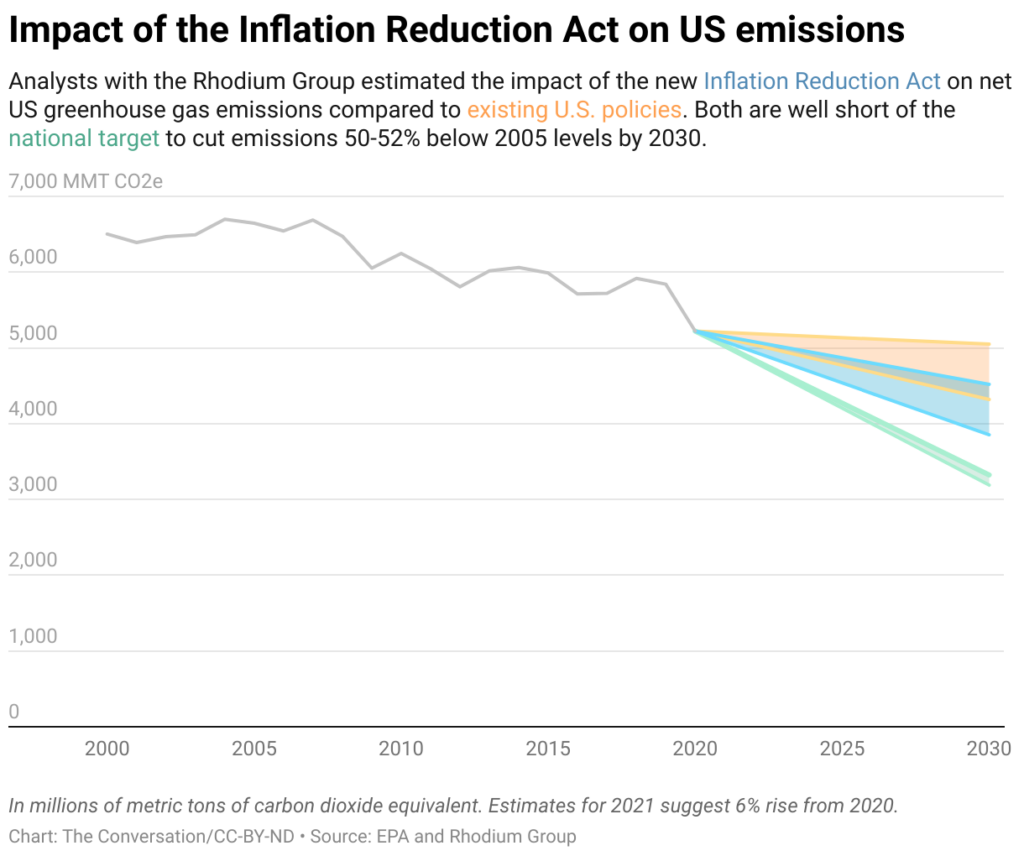 What will it take to close that gap?

The Inflation Reduction Act’s subsidies will make clean technologies cheaper, but the biggest need domestically is for more infrastructure and stricter environmental regulations.

For infrastructure, tax credits for electric cars will do little good without enough publicly available chargers. The U.S. has around 145,000 gas stations, but only about 6,500 fast-charging stations that can power up a battery quickly for a driver on the go.

Over 1,300 gigawatts of wind, solar and battery projects – several times the existing capacity – are already waiting to be built, but they’ve been delayed for years by a lack of grid connections and backlogged approval processes by regional grid operators.

The Infrastructure Investment and Jobs Act passed by Congress last year provides some funding for chargers, power lines and pipelines, but nowhere near enough. For example, it sets aside only a few billion dollars for high-voltage power lines, a tiny share of the hundreds of billions of dollars needed to chart a path toward net-zero emissions. Its $7.5 billion for chargers is just a third of what electric car advocates project will be needed.

Even more important is to clear the regulatory obstacles to building clean energy infrastructure.

Democratic leaders of the Senate and House have pledged to pass legislation to make it easier to obtain permits for power lines and pipelines, but doing so would require bipartisan support, and that remains in doubt.

State and local governments and regional grid operators also play pivotal roles in approving new infrastructure and clean energy projects. They must overcome not-in-my-backyard opposition – some of it from policymakers themselves – to the power lines, pipelines and facilities that will be needed for clean energy, and simplify approval processes for rooftop solar panels.

It can’t all be carrots: Sticks are needed, too

By tightening emissions limits for greenhouse gases and other air pollutants under its Clean Air Act authority, the Environmental Protection Agency can spur the closure of old fossil-fueled power plants, require carbon capture at new ones and drive emissions reductions across a range of industries.

Stricter emissions limits could force gasoline and diesel vehicles to become more efficient and accelerate the adoption of electric ones. Tougher reporting rules and better monitoring of methane leaks will be needed to back up the one stick in the Inflation Reduction Act – its tax on methane emissions.

States wield powerful regulatory sticks too. Ten states have already set 100% clean or renewable electricity standards. California and Oregon have set requirements for cleaner fuels, and states like New York and Washington are implementing comprehensive climate strategies. The more states follow their lead, the more quickly emissions can be cut. The new federal subsidies will ease the path to doing so.

Ramping up research and global impact

All the new spending has the potential to achieve deep emissions cuts domestically, but they will have little impact abroad without further action.

Other countries will only adopt clean technologies if they’re affordable, but the Inflation Reduction Act’s subsidy buffet is only available to U.S. citizens and companies. Its rewards for domestic solar manufacturers may help them gain market share in the U.S., but they’ll likely do little to reduce prices in markets dominated by low-cost Asian manufacturers.

More progress abroad may be driven in future decades by the boosts in funding for emerging technologies. For example, the Inflation Reduction Act provides billions of dollars for clean hydrogen and carbon capture technologies that are not yet commercially viable but could become so with greater deployment. Carbon capture should be targeted toward locking up carbon from difficult-to-decarbonize industries like biofuel production, rather than to prolong the use of coal power plants or subsidize oil and gas production.

The CHIPS and Science Act Biden signed in early August 2022 authorizes $67 billion in funding for zero-carbon industries and climate research, although subsequent legislation will be needed to ensure that those funds are actually appropriated.

It would double the budget for the Department of Energy’s ARPA-E program, which funds research into the most cutting-edge energy technologies. As I discuss in my book, that could be especially important for making clean hydrogen cheap, making geothermal viable in more places, and developing new forms of energy storage. Together with the subsidies provided by the Inflation Reduction Act, that could jump-start the research, development and deployment needed to make these technologies affordable worldwide in the decades ahead.

After years of gridlock, there’s reason to celebrate Congress passing three bills that will do more to cut U.S. emissions than any legislation in history. But much more will be needed to reach the nation’s climate goals and to make clean energy more affordable at home and abroad.

Daniel Cohan is an associate professor in the Department of Civil and Environmental Engineering at Rice University in Houston. His research specializes in the development of photochemical models and their application to air quality management, uncertainty analysis, energy policy and health impact studies.