Global warming at work: July was US history’s warmest month of nights

In Galveston, an astounding 24 of 31 nights set record-warm minimum temperatures last month. The average for daily highs in Texas was a withering 100.2, making July the state’s second-hottest month on record by that measure. 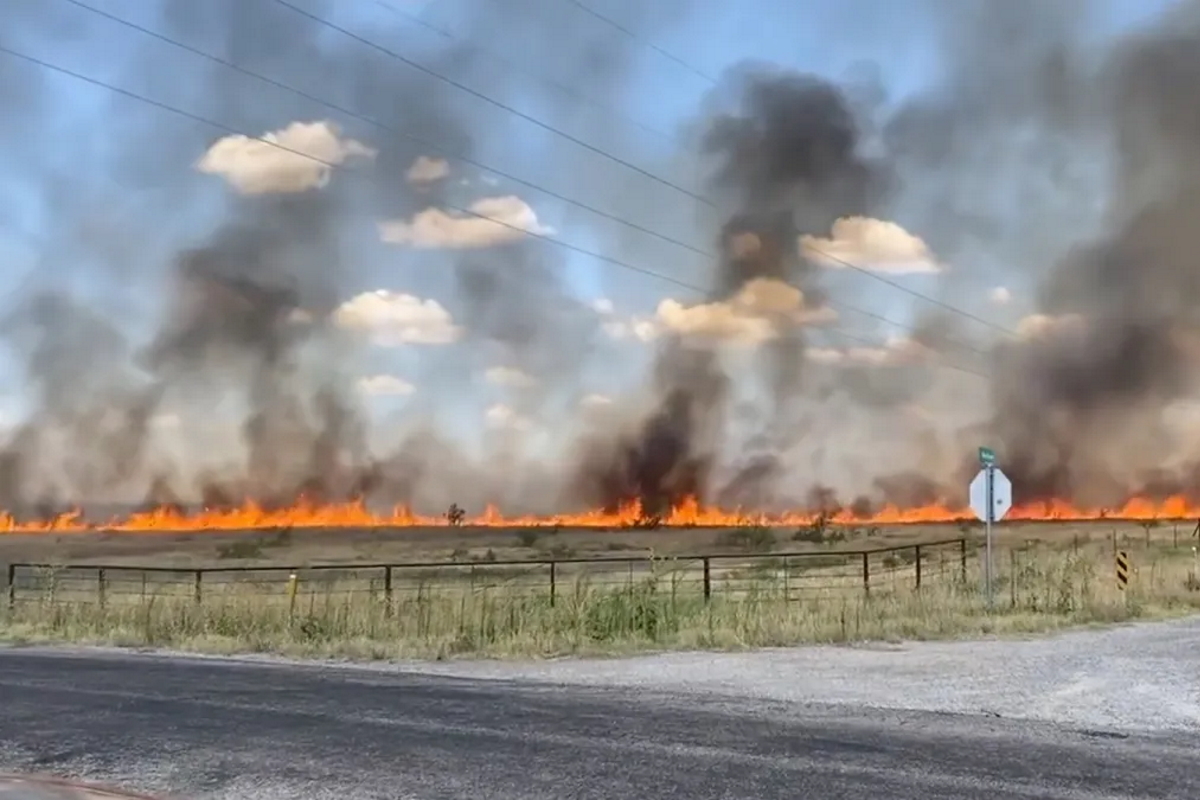 The Frazier Fire rages through grassland in Wichita County, Texas, on July 22. Texas had its hottest and fifth driest July on record. Texas A&M Forest Service

Bob Henson, a contributing editor of Texas Climate News, wrote this article for Yale Climate Connections, where it originally appeared.

As it melts records across the Northern Hemisphere, the scorching summer of 2022 has squeezed out the warmest month of nights in U.S. history. Sweltering nights are a recipe for trouble during major heat waves, as they give human bodies in un-air-conditioned places less chance of recuperating from the more intense heat of the day.

In its July 2022 national climate roundup, NOAA reported on Monday, August 8, that the monthly average temperature of 76.42 degrees Fahrenheit (24.68 degrees Celsius) across the contiguous United States was the third hottest for any month on record, just behind July 1936 and July 2012.

It was a top-ten-hottest July for 20 U.S. states in an arc stretching from the Pacific Northwest to the Southern Plains, across the mid-South, and into the Mid-Atlantic and southern New England (see Fig. 2 below).

A preliminary total of 30 U.S. sites recorded all-time highs in July, with another 18 tying their previous all-time highs, according to NOAA’s Daily Weather Records website.

Toasty by day, and still warm by night

Even more notable, the nationally averaged daily minimum temperatures (63.57°F) were the warmest for any single month in the 128 years of U.S. record keeping, just slightly outpacing 63.55°F from July 2012.

Daily minimum temperatures for July since 1895, averaged across the month and across the contiguous United States. Also shown is the linear trend since 1970, capturing the era of increased warming over the last half century. NOAA/NCEI

Both theory and observations indicate that a planet being warmed by human-produced greenhouse gases will tend to get more of that warming where and when it’s normally cool: at higher latitudes, during winter, and at night. A landmark 1993 study found that daily minima were warming three times faster than daily maxima over the Northern Hemisphere. That conclusion doesn’t mean summer days are immune from human-produced heating, just that the temperature bump at night tends to be even larger.

Two U.S. states had their warmest average daily minima for any month on record in July 2022 by substantial margins:

The trend isn’t limited to the United States, of course. So-called “tropical nights” (those with lows of 68°F or higher) are becoming more common in the United Kingdom, as Stephen Burt (University of Reading) pointed out in an essay on July 15, just before the peak of a record-smashing UK heat wave. Burt noted that half of all tropical nights since 1814 at Oxford up to that point had occurred in the past 25 years.

According to a global analysis published in 2020, locations with the most asymmetric response to warming (i.e., places where nights are warming fastest relative to days) tend to be getting cloudier, more humid, and wetter. Daily minimum temperatures for July since 1895, averaged across the month and across the contiguous United States. Also shown is the linear trend since 1970, capturing the era of increased warming over the last half century. NOAA/NCEI

Among the U.S. cities that had their warmest July on record in 2022, based on average temperature (daily lows plus daily highs):

As for warm nights, it’s hard to overstate what happened in July 2022 in Galveston, Texas. An astounding 24 out of 31 nights set record-warm minimum temperatures. In the last 13 days of that month, the temperature never dipped below 84°F, and there was an eight-way tie for the warmest night ever observed in July (86°F).

A tale of two moisture anomalies

Precipitation was a starkly mixed bag across the United States in July. Drought expanded to cover much of the nation (51%) by month’s end, according to the U.S. Drought Monitor. Severe drought intensified in several areas, especially the Southern Plains. Statewide rankings for average precipitation for July 22, as compared to each July since records began in 1895. Darker shades of green indicate higher rankings for moisture, with 1 denoting the driest month on record and 128 the wettest. NOAA/NCEI

During that same period, massive cloudbursts doused records and led to destructive flash floods in other locations. One focused area of flooding ran from the Midwest to the Appalachians, as record rains fell in both St. Louis and in eastern Kentucky. Catastrophic flooding ensued in the latter, killing at least 37 people.

Bob Henson is a contributing editor of Texas Climate News. A meteorologist and science writer based in Colorado, he is the author of “The Thinking Person’s Guide to Climate Change.”