They once worked for Big Oil’s enablers. Now they refuse to be complicit

Workers within industries that prop up fossil fuels said they could no longer ignore the climate crisis. So they quit. Three of them who did reveal their experiences. 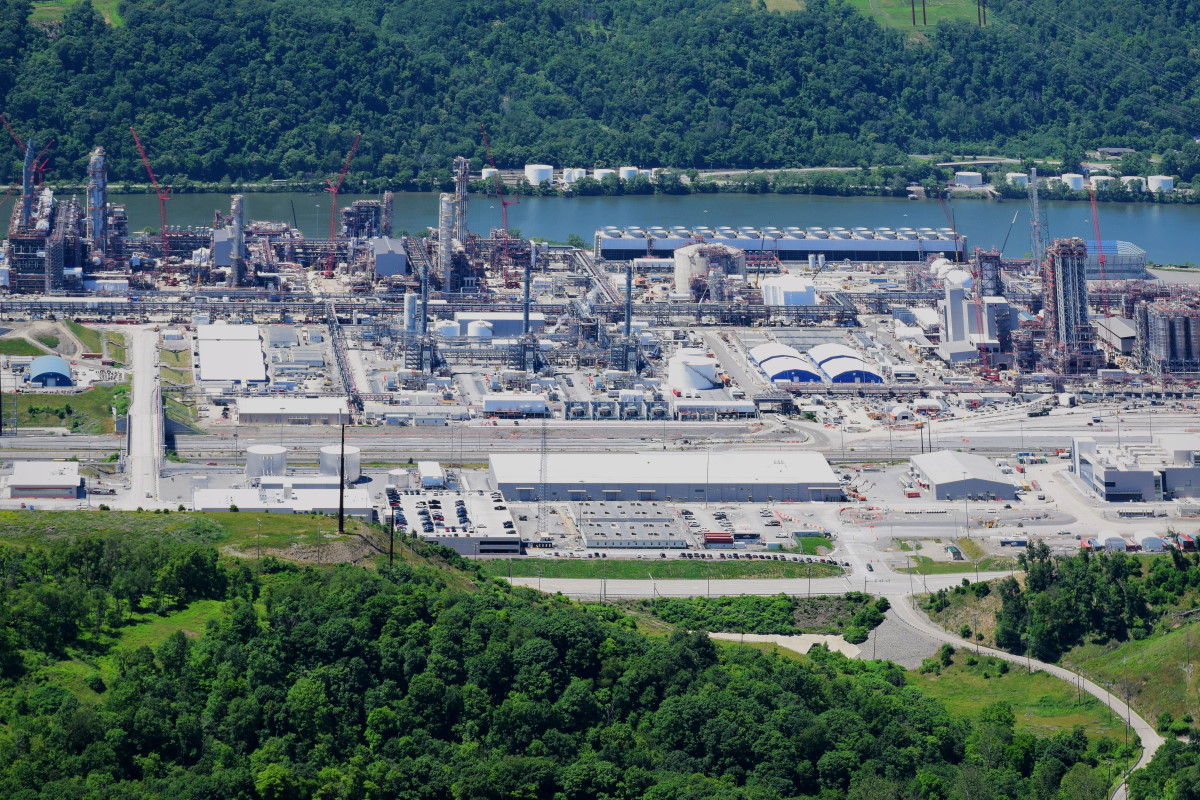 Construction in 2021 at Shell’s Pennsylvania Petrochemicals Complex, about 30 miles from Pittsburgh. Shell says the plant will process shale gas to produce ethylene, which will be used to make polyethylene, the world’s most widely used plastic. Ted Auch, FracTracker Alliance, 2021. Aerial support by LightHawk. CC BY-NC 2.0, flickr

More than a century ago, fossil fuel firms hardly needed help maintaining their image. Coal-powered trains, oil-burning power plants and gas-heated houses were likened to patriotism and social progress. But over time, especially as industry scientists began uncovering the direct link between the burning of fossil fuels and the climate crisis, America’s petroleum giants turned to the public relations industry they had helped create to persuade consumers to remain loyal.

PR campaigns that frame oil and gas as essential to solving the climate crisis have become the industry survival strategy. But over the past decade, the spinmasters behind these campaigns and the executives in industries that prop up fossil fuels have woken up to the role their work plays in contributing to climate breakdown.

Waves of employees have co-signed letters and quit en masse in response to their firms’ complicity in obfuscating climate crimes and rolling out aggressive greenwashing schemes. And the resignations are picking up pace. Just last month in a bombshell public resignation, Caroline Dennett, a consultant for Shell, parted ways with the company, citing its “double talk on climate.” She urged others to do the same. The Guardian spoke with three people who reveal their experiences closing the door on fossil fuel projects, and share advice for others who may consider following in their footsteps.

Tariq Fancy, chief information officer for sustainable investing at BlackRock from 2018 to 2019

When I took the reins of BlackRock’s sustainable investing operation, it was because I still bought into the myth that societal ills could be solved at the intersection of profit and purpose. I’d left the investment banking world to start an ed-tech non-profit called Rumie. But when approached with an offer, I couldn’t turn down the chance to take a swing at shaping a better capitalism. That unraveled pretty quickly.

I saw how siloed the company was. We were telling exciting stories about how individual investments in certain funds could steer society toward a green economy. But down the hall the public policy team was probably slowing regulations that could address the climate crisis.

A particular experience aboard a private jet to Madrid rubbed me the wrong way. It grew clear my higher-ups didn’t want to discuss the mechanics of sustainable investing, like if and how purpose-driven investing could actually intervene in the climate crisis. I couldn’t sleep that night. I couldn’t shake the “what am I doing here?” feeling. What if sustainable investment was doing even more harm than good? We were spewing false narratives that investing right was a saving grace, when we actually needed system change.

A few days later I gave my notice. I was pretty quiet about it and transitioned out over six months. They even threw me a going away party.

It wasn’t until much later, after continuing to do my own research, that I went public. It’s definitely a stressful decision. But I think I would have felt worse if I had bottled it up.

While my experience was to leave, I actually think the most important thing someone can do at this juncture is to stay in their role and agitate. Almost all CEOs say they believe the science of climate change. But behind the scenes they’re blocking everything. That won’t change unless pressure mounts from the inside, until younger employees get together to say “this is not acceptable” and shine a spotlight on BlackRock’s lobbying and unlimited political spending, which is what’s blocking meaningful climate legislation.

Executives know that if employees turn against them, they’ll have to respond, whether demands are related to #MeToo, Black Lives Matter, or complicity in the climate crisis. Otherwise, they won’t be able to run their company. I think that’s where younger employees are most powerful.

Christine Arena, executive vice-president at Edelman from 2014 to 2015

When I quit Edelman along with five colleagues, I had no idea of the scale of the PR industry’s “information pollution” problem. There’s no straightforward database for employees to check exactly which clients their firms serve. Companies like Edelman flaunt clients they feel good about working with. But the ads they did for fossil fuel clients weren’t much discussed.

So when the Climate Investigations Center revealed that Edelman had done work for one of the largest fossil fuel trade associations out there, the American Legislative Exchange Council, it sparked a media firestorm and raised all kinds of questions.

How much money are we talking about? And how far back did those contracts go? Edelman has said they don’t work for climate deniers – but how can you take a stance on that and represent some of these more extreme groups whose entire role is to counter-message climate action?

In spite of the stir, management wouldn’t talk. I still can’t share many details for fear of backlash. But what I can say is that it was bad enough for six of us executives to quit without necessarily lining up other jobs.

I did it subtly. In my exit interview I didn’t put up any protest. I was like, “I need to get the hell out of here and be quiet.” Since then, I’ve been working with scientists, academic researchers and investigative journalists and realized PR has gotten even worse. Over the past seven years, the use of greenwashing has exploded.

For employees thinking of taking a stand, make a calculated decision. This is so serious. For creatives who may have worked on accounts for fossil fuel companies or industry groups, they should go straight to a formal whistleblower aide, rather than leak that information to the press. And for people who have more general climate qualms, reach out to a network like Clean Creatives, come together as a group, write letters to management and plan actions. Employees are incredibly powerful. I think they will be the tipping point in this whole problem.

While it’s essential to be strategic, I call on others with integrity to act quickly. Oil and gas PR pollution has only gotten worse since Russia’s invasion of Ukraine. This is the moment to find courage and voice.

Remember, there are plenty of job opportunities outside the largest firms. I’m doing better than ever since I left Edelman, and still working with global clients. The innovation in our industry is not coming from the big, old-school PR firms any more. It’s coming from startups and small-to-midsize agencies. Know that there are possibilities.

Most of my clients are agencies that approach me to work on campaigns with an ethical or green slant. Earlier this year, I was approached by two different agencies. But after checking out their websites, I realized they also worked with fossil fuel clients.

I’m not comfortable naming the firms, or their clients. I’m sorry I can’t be more specific. It’s really hard because on the one hand, the stuff we’re talking about is fucking more important than whether I drop someone’s name or not. But I’m also at risk of losing my income stream.

When I was preparing to tell one firm I’d be uncomfortable taking work from them, I got really nervous. It was really tense. After I did, I think I was expecting them to kind of pour their heart out, or whatever. But they were just like, “fair enough”.

I was really disappointed with how little both agencies wanted to talk about the issue. It means that higher up in the firms, they don’t give a damn about climate.

I think if an agency wanted to engage in a conversation to talk about where they are in their journey breaking up with fossil fuel clients, I might understand and work with them. But the line is: “If you work with fossil fuels and you’re not actively removing those as your clients, then you’re complicit in the damage they’re doing.” That has to be the red line. I didn’t say that then. But now I’m feeling kind of gung ho about it.

My advice for other freelancers is to do your homework well ahead of time, as soon as an agency approaches you, to try to find out if they do work for fossil fuel clients. If they do, have your explanation prepared. It’ll be better than realizing later and having to tell them further along in the relationship.

And don’t worry about being called a hypocrite if you start turning down clients. I find it so stressful when people point out how my wife still flies on planes in spite of my climate stance, for example. We can’t keep getting stuck on this. We’re all hypocrites. It’s better to be a hypocrite and do something than be a hypocrite and do nothing.

Leanna First-Arai is a regular contributor to Truthout whose work has appeared in The Guardian, Undark, Southerly, MLK50, Yes! Magazine, Sierra Magazine, Outside Magazine, Hyperallergic Magazine and on New England Public Radio.