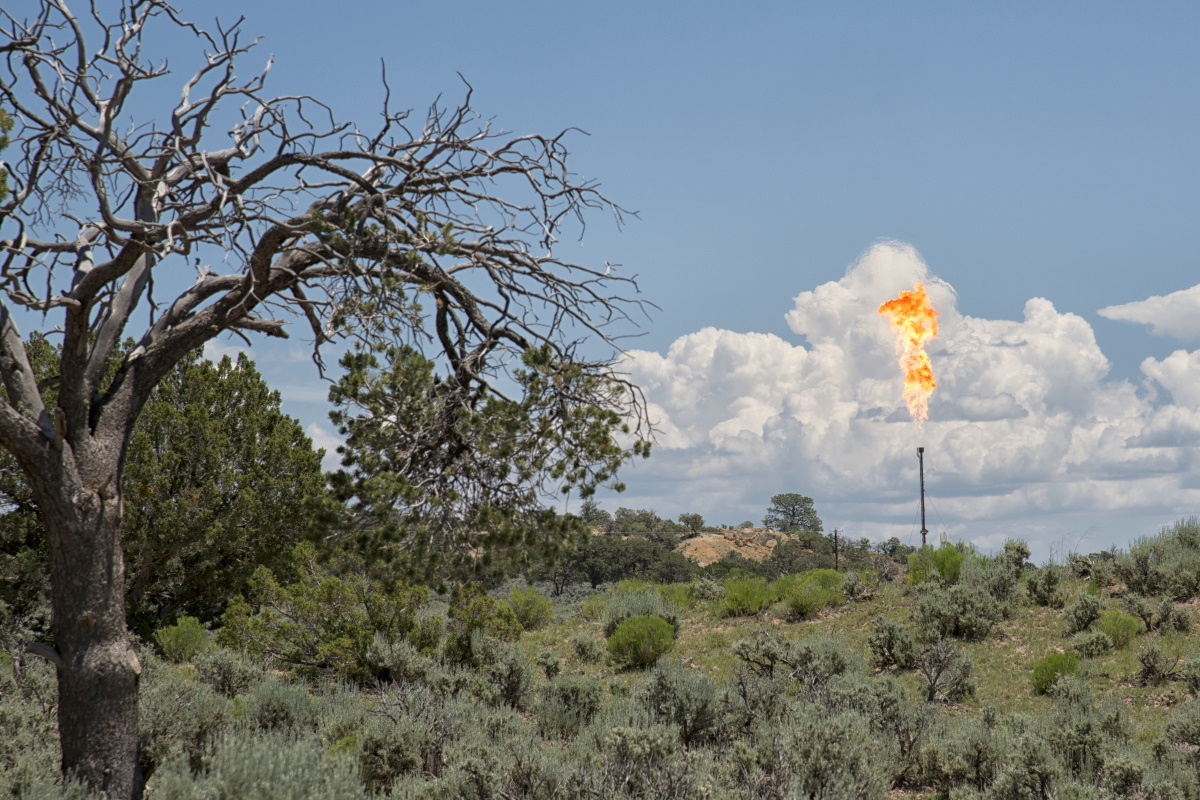 The oil and gas industry wants to play a word-and-picture association game with you. Think of four images: a brightly colored backpack stuffed with pencils, a smiling teacher with a tablet tucked under her arm, a pair of glasses resting on a stack of pastel notebooks, and a gleaming school bus welcoming a young student onboard.

“What do all of these have in common?” an April 6 Facebook post by the New Mexico Oil and Gas Association (NMOGA), asked. “They are powered by oil and natural gas!”

Here in New Mexico – the fastest-warming and most water-stressed state in the continental US, where wildfires have recently devoured about 240,000 acres (370 square miles as of May 11) and remain uncontained – the oil and gas industry is coming out in force to deepen the region’s dependence on fossil fuels. Their latest tactic: to position oil and gas as a patron saint of education. Powerful interest groups have deployed a months-long campaign to depict schools and children’s wellbeing as under threat if government officials infringe upon fossil fuel production.

In a video spot exemplary of this strategy, Ashley Niman, a fourth-grade teacher at Enchanted Hills elementary school tells viewers that the industry is what enables her to do her job. “Without oil and gas, we would not have the resources to provide an exemplary education for our students,” she says. “The partnership we have with the oil and gas industry makes me a better teacher.”

The video, from September last year, is part of a PR campaign by NMOGA called “Safer and Stronger.” It’s one of many similar strategies the Guardian tracked across social media, television and audio formats that employs a rhetorical strategy social scientists refer to as the “fossil fuel savior frame”.

“What NMOGA and the oil and gas industry are saying is that we hold New Mexico’s public education system hostage to our profit-motivated interests,” said Erik Schlenker-Goodrich, executive director of the Western Environmental Law Center. “There’s an implied threat there.”

Last year, New Mexico brought in $1.1 billion from mineral leasing on federal lands – more than any other U.S. state. But the tides may be turning for the fossil fuel industry as officials grapple with the need to halve greenhouse gas emissions this decade. Before mid-April, the Biden administration had paused all new oil and gas leasing and the number of drilling permits on public lands plummeted.

In response, pro-industry groups are pushing out what some experts have called “sky is falling” messaging that generates the impression that without oil and gas revenue, the state’s education system is on a chopping block. NMOGA did not respond for comment.

Since February, NMOGA has flooded its social media pages with school-related motifs like buses and books, but also with images of empty, abandoned classrooms accompanied by reminders about how the state’s schools “rely on oil and gas production on federal land for more than $700m in funding.” Elected officials have parroted this framing. “This is a matter of critical importance to all, but especially to New Mexico’s schoolchildren, who have suffered greatly during the pandemic,” state Rep. Yvette Herrell co-wrote in the Santa Fe New Mexican, in February.

“Any slight reductions stemming from pauses or other so-called ‘adverse’ actions would have zero immediate effect on school funding overall, much less whether students get the services they need to recover from the ill effects on their learning from the pandemic,” said Charles Goodmacher, former government and media relations director at the National Education Association (NEA), now a consultant. The sale of leases does not lead to immediate drilling, he said. Often, companies sit on leases for months or years before production occurs.

And as it happens, New Mexico currently has a budget surplus from record production.

Industry attempts to convince New Mexicans that the state’s public education system is wholly dependent on oil and gas are based on a tough truth: decades of steep tax cuts have indeed positioned fossil fuels as the thunder behind Democratic-led New Mexico’s economy. In 2021, 15% of the state’s general fund came from royalties, rents and other fees that the Department of the Interior collects from mineral extraction on federal lands. Oil and gas activity across federal, state and private lands contributes around a third of the state’s general fund of $7.2 billion, as well as a third of its education budget.

The commissioner of public lands, Stephanie Garcia Richard, herself a former classroom teacher, has been at the forefront of efforts to diversify the New Mexican economy since she was elected to manage the state’s 13 million acres of public lands in 2018.

“When I ran, in my first campaign, we talked a lot about how a school teacher really understands what every dime that this office makes means to a classroom.”

Garcia Richard takes pride in being the first woman, Latina and teacher to have been elected to head the office, which oversees about $1 billion in revenue generation each year. Since 2019, she’s launched a renewable energy office and outdoor recreation office to raise money from those activities, though Garcia Richard doesn’t believe that money will ever fully make up for oil and gas revenue. “I don’t want anybody ever to think that I have some notion that the revenue diversification strategies we’re pursuing right now somehow make a billion dollars.”

Given the same geographic features that make New Mexico the “land of enchantment,” the state is positioned to become a national leader in solar energy, Balderas said. But four of the state’s major solar farms are severely behind schedule.

Balderas, who has accepted $49,900 in campaign contributions from oil and gas over seven election cycles, said that a sudden disruption in new oil and gas leasing such as the blanket moratorium the Biden administration originally proposed in January last year, would have an outsized impact on New Mexico’s most vulnerable.

“You would cut out nearly a third of the revenue that we rely on to fund our schools and our roads and our law enforcement community,” he said. “I don’t think environmental activists really think about that perspective: how progressives have cleaner air but then thrust original Americans like Native American pueblos into further economic poverty.”

Some on the receiving end of oil and gas revenue stress that not all educators and students embrace fossil fuel industry money in public schools. Mary Bissell is an algebra teacher at Cleveland High School in Rio Rancho, who co-signed a letter in November, along with more than 200 educators, asking NMOGA to “stop using New Mexico’s teachers and kids as excuses for more oil and gas development”.

Bissell says in spite of how cash-strapped schools may be, many of her colleagues don’t want oil and gas money. “I’m not going to teach my kids how to find slope based on fracking,” she said of her math courses. Bissell characterized NMOGA’s attempt to portray educators as a unified force beholden to oil and gas funding as “disgusting.”

In some states, including Rhode Island and Massachusetts, state attorneys general have taken it upon themselves, as the leading law enforcement and consumer protection officials, to sue oil and gas companies for deceiving consumers and investors about climate change through their marketing. Balderas’s office said it was not actively pursuing that strategy.

Seneca Johnson, 20, a student leader with Youth United for Climate Action (YUCCA), is from the Muscogee Nation of Oklahoma. Johnson grew up in New Mexico, and knows first hand about the state’s underfunded schools. “I remember in elementary school we would have a list: bring three boxes of tissues, or colored pencils,” she said, speaking of Chaparral Elementary School in Santa Fe. “As students and as teachers, [you’re] buying the supplies for the classroom.”

Johnson remembers being told as a child that the schools she attended ranked second worst in the nation. If New Mexico’s education system is indeed that bad, she said, how can officials continue to think that accepting a funding structure that delivers such a consistently poor result is a good idea?

“At the end of the day the system that we have now that is being paid for by oil and gas doesn’t work, and we know it doesn’t work,” Johnson said. “It’s the whole ‘Don’t bite the hand that feeds you’ kind of mentality,” she said, linking the industry’s patronizing messaging around its support for schools to a direct legacy of colonization.

Leanna First-Arai is a regular contributor to Truthout whose work has appeared in The Guardian, Undark, Southerly, MLK50, Yes! Magazine, Sierra Magazine, Outside Magazine, Hyperallergic Magazine and on New England Public Radio.

The extent of recent wildfires in New Mexico was updated by Texas Climate News after this article first appeared in The Guardian.