Abandonment, rebuilding, and uncertainty lie in wake of Louisiana’s most powerful hurricane on record. A writer-photographer found much destruction “was still exactly as it would have been the day after Laura hit.” 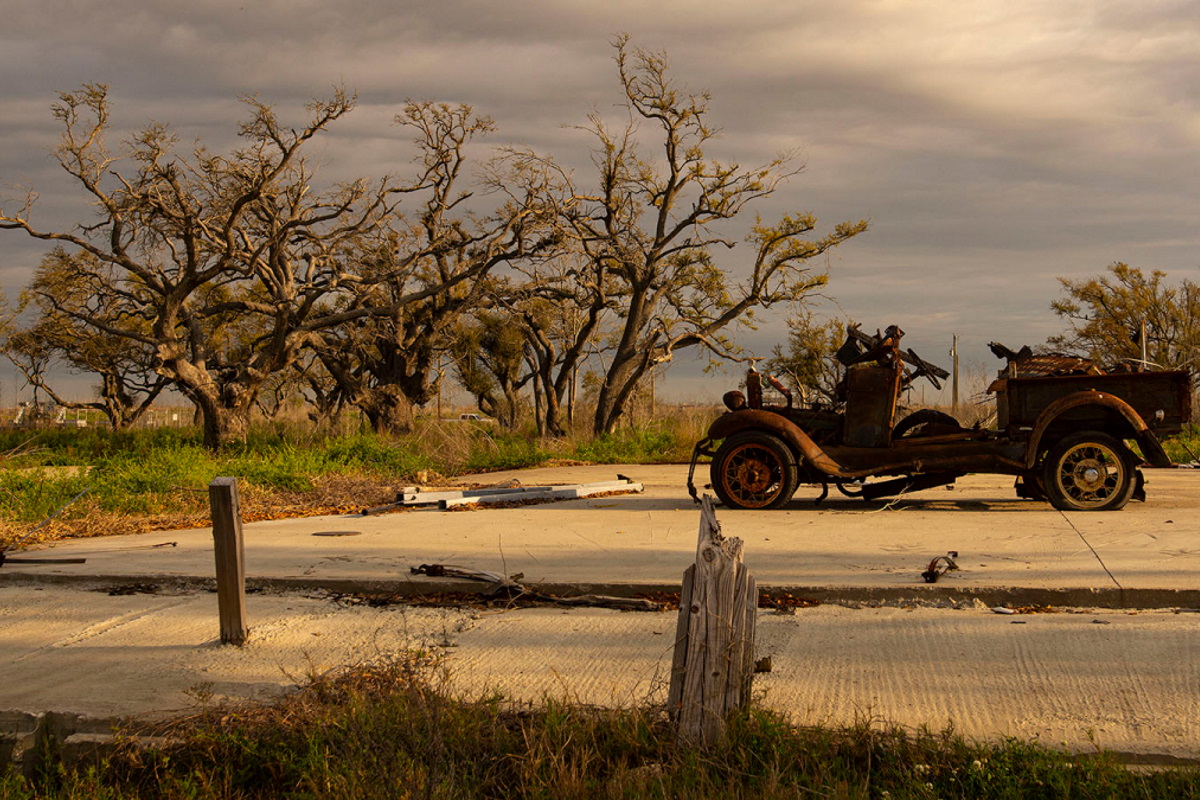 This first-person report was written by Charlie Randall, who took all the photos while storm-chasing in Cameron Parish, Louisiana. He produced this article for Yale Climate Connections, where it originally appeared.

It’s rather surreal to be camped out on the shores of the Gulf of Mexico, in Cameron Parish, knowing how a year and a half ago the ocean rose approximately 18 feet under the power of Hurricane Laura.

That storm surge swept inland over sparse but still populated bayous and marshland of southern Louisiana, taking out homes, businesses, infrastructure and cemeteries.

I had come down from Canada to start a two-month storm chasing-focused road trip and didn’t really know what I’d find 18 months after Laura had hit. 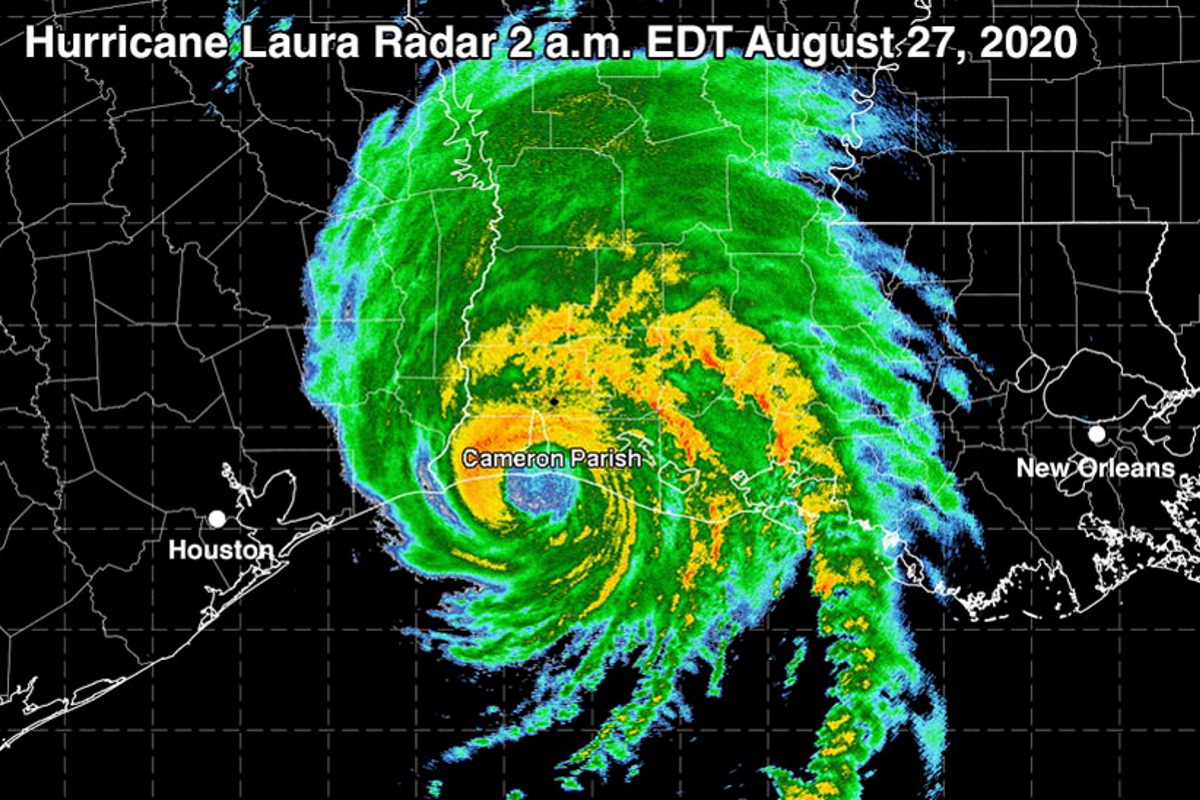 Hurricane Laura made landfall in western Louisiana on Aug. 27, 2020, as a Category 4 storm with 150 mph winds – tied as the strongest landfalling hurricane in Louisiana history, and tied as the fifth-strongest hurricane on record to make a continental U.S. landfall. Laura killed 42 people and did $20.3 billion in damage, making it the 14th most expensive hurricane in history.

The scars, however, are everywhere. Cement slabs reminding you of where homes once stood. Reeds and marsh-grass still draped high up in trees, a testament to the height the waters reached. Rows of bent fence posts, mangled by the relentless push of water coming from the Gulf. Trailers everywhere as the people who live here contemplate whether to rebuild.

I drove in from the east, along Highway 82, the closest road to the Gulf. I knew this would take me through the hardest hit areas of Cameron Parish, but having never witnessed hurricane damage it was still shocking to see the extent of the destruction and how much of it was still exactly as it would have been the day after Laura hit.

The first sign of what had taken place came as I passed a now-abandoned house that had been swamped by storm surge and was heavily damaged. It was filled with reeds from the marshes to the south. The house sat six to seven feet above the road, which itself was about the same height above sea level. Whoever lived here must have left before the storm, come back to see the devastation, and decided they had had enough. 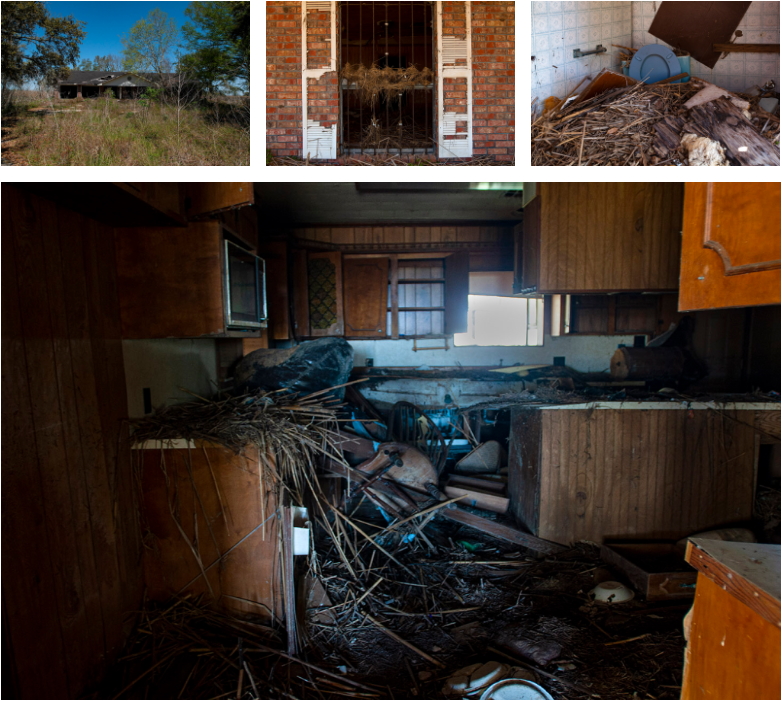 The area is even more sparsely populated now, as many more also have decided against coming back. The mass mobilization of resources that often happens in response to a storm like this in more populated areas seems not to have happened here in the same way. Although water and power have been restored by now, I saw a couple of infrastructure buildings that had the lower parts of the siding ripped off: They were still exposed to the elements but were seemingly operating at a somewhat normal level.

Moving ahead, with more storms still to come.

This notion of moving forward while not fully repairing everything seems to be a possible acknowledgement that more storms may lie in the future. Throughout the marshes, random debris is still left from the storm, slowly becoming enmeshed into the local ecosystem, as birds sit atop sheet metal, and alligators maneuver around broken cement pipes. 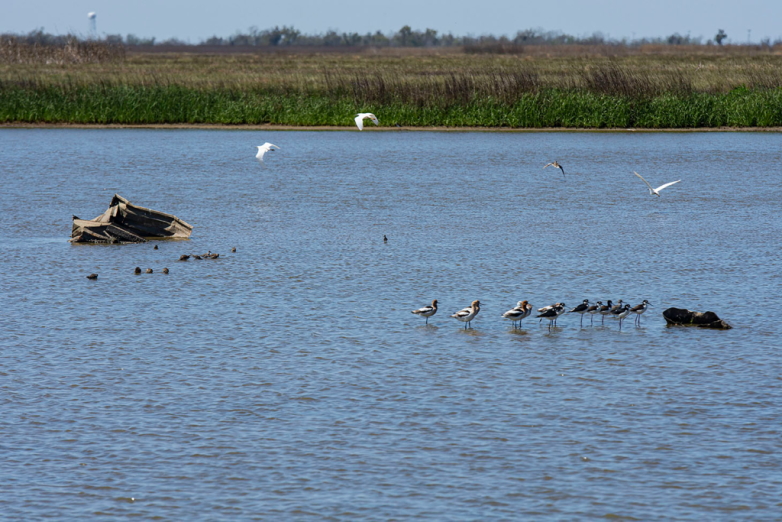 Biking around one day, I ran across a young cattle farmer, Carl, who told me that he and his extended family once had three homes on the property where we were standing. Laura destroyed all three, along with all his farm equipment (he had sold off 185 head of cattle three days before the storm, giving him some cash to work with going forward). All that remained was a giant tree, with a tire swing somehow still attached.

Carl had grown up here, and while he said he had originally not planned on returning and had looked for land near Shreveport and in Texas (but he says he doesn’t like Texas), he decided to return here with his wife and kids and give farming another go. He won’t build any more homes, though, and is among the many here now living out of trailers, knowing they can at least move those out of the way if a future storm again threatens. 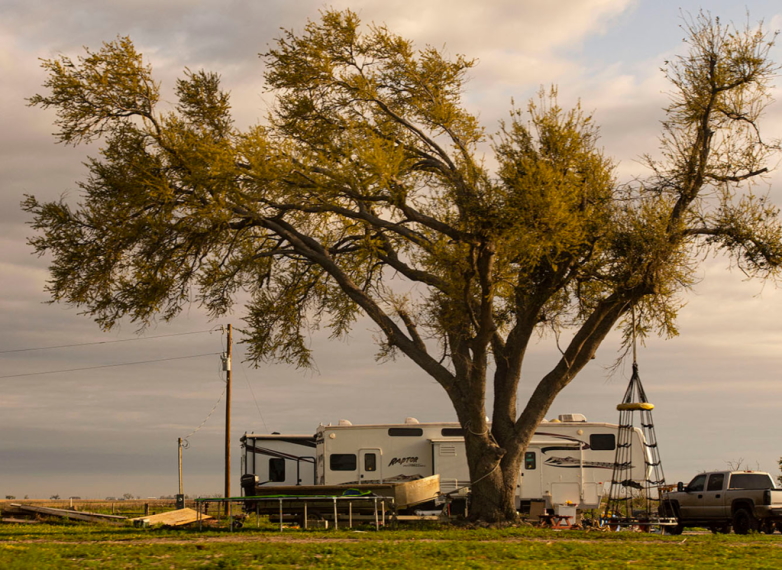 Farther down is a much more morbid reminder of the power of water. Burial of the dead in these southern marshes takes place at ground level, with the caskets placed in cement coffins only a foot deep in the ground. The reason? The ground water here is much too high to allow digging deep into the ground.

When Laura hit, the combination of an increasingly saturated ground and the storm surge flowing in created a situation with the caskets and cement coffins floating up and then being pushed north with the surging waters. Some were recovered, but it seems likely that many were lost in the expansive marshes. 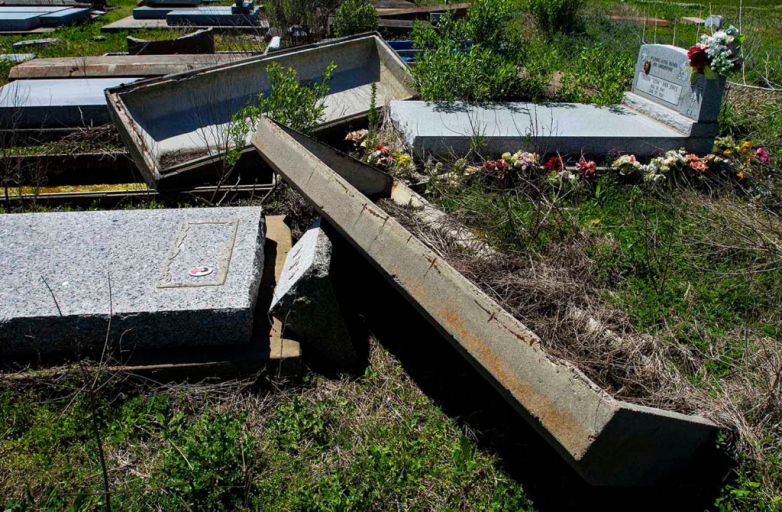 The power of a hurricane is maybe best understood in its ability to change whole landscapes, both physically and socially. The scale of the impact can be so widespread that it takes years to recover if at all, as seems the case here in Louisiana. However, humans are incredibly adaptive and resilient, and many buildings in the area weren’t as badly damaged. The Cameron High School for example, while suffering serious roof damage, wasn’t affected by the surge as the school is raised up 15 feet on concrete pillars. While this is a luxury many can’t afford, any long-term livability in the area depends on improvements like these.

On a day with a clear blue sky, breezy and warm, the beauty of this place makes it easy to see why people like Carl and his family have returned, albeit tentatively. People often chastise hurricane survivors for living in harm’s way in the first place. But when you grow up in a place, and it’s the only life you know … the notion of just up and leaving isn’t always a viable or attractive option.

On leaving, I comment to Carl about the nearly unobstructed 360-degree horizon around us, and the awe it inspires, as I’ve never really witnessed anything like it. He laments that if he had his old tractor with a bucket lift on it, he’d put me in it and lift me as high as it could go so I could really get a sense of the scale of the open land. That beautiful unobstructed view, of course, is partly what let Laura’s surge so easily sweep inland.

As with most things in nature, and storms in particular, it’s the juxtaposition between beauty and destruction that elicits both fear and awe in us as a species, for centuries captivating people all over the world. Whatever this year’s hurricane season brings, the beauty of all these places along the coast unfortunately will succumb somewhere, sometime, to the unparalleled power of hurricanes. 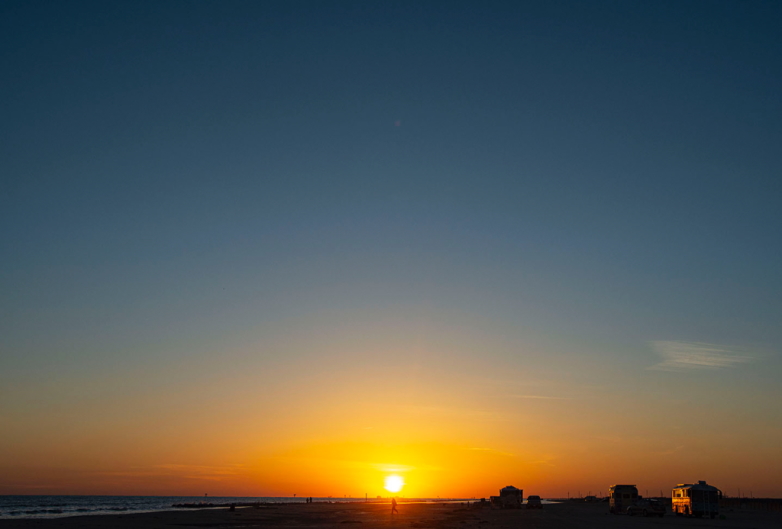 Charlie Randall is a Canadian photojournalist, one-time meteorology student and, now, an avid storm chaser traveling across parts of the U.S. observing extreme weather and its aftermath.