As climate-linked crisis of plastic pollution grows, we keep cranking out plastic 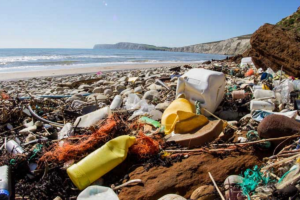 The U.S. should adopt a strategy by the end of 2022 to reduce its growing role in polluting the oceans with plastic, urges a new report from the National Academies of Sciences, Engineering, and Medicine. National Academies

Scientists have documented plastics in nearly every part of the natural world. A growing body of research also documents a variety of harmful effects, from entanglement of marine life in “ghost” fishing nets to microplastics (small particles created by breakdown of larger pieces of plastic) accumulating in digestive tracts of animals and serving as vectors for chemical contaminants and microbes.

Now, a paper from Rice University in Houston reports another problem: free-floating genetic materials that create antibiotic resistance in bacteria also catch a ride on bits of plastic debris in the ocean.

“The spread of ‘superbugs’ is something we need to consider seriously. One consideration is how they spread, and plastics is one of those ways,” says Pedro Alvarez, a professor in Rice’s Department of Civil and Environmental Engineering and a co-author on the paper. “One thing that worries me is that with the growing societal demand for renewable energy, petrochemical plants may shift their focus to plastics production to make use of existing feedstocks.”

A report this month from The National Academies of Sciences, Engineering, and Medicine titled “Reckoning with the U.S Role in Global Ocean Plastic Waste” suggests that Alvarez’s concern is on the mark. It projects plastics to make up approximately one-third of oil demand growth in 2030 and almost half by 2050. Globally, more than 99% of plastics are produced from fossil feedstocks (petroleum or crude oil and natural gas), and 90% of the plastic made in the U.S. comes from virgin feedstock.

The Committee on United States Contributions to Global Ocean Plastic Waste, sponsored by the National Oceanic and Atmospheric Administration (NOAA), issued the report. Congress asked the committee to answer some questions about the role of the U.S. in the plastic pollution problem, according to committee chair Margaret Spring, chief conservation and science officer at the Monterey Bay Aquarium in California.

“We told them the U.S. needs a national strategy,” Spring says. “[This country] plays a large role in producing plastics – we are the largest producer of plastic waste in the world, even with a small percentage of the world’s population – and plastic waste. We are part of the problem.”

According to the report, about 45% of the total plastic produced each year is for single-use products or packaging, which become waste by design. The more plastic and plastic waste we produce, Spring adds, the more of it ends up in the ocean.

“While we’ve been spending a lot of time focusing on what to do to clean it up, we haven’t focused on the root cause, which is the life cycle of plastic. It is a one-way trip to the environment. One way to reduce plastic waste is to reduce production of plastic. We can’t skip that step,” she stresses. “We can’t be producing plastic that is going to leak into the environment.”

Consider this analogy from one of the authors of another study, published last year in the journal Science, which also asserts that reducing plastic consumption is key to solving the problem of plastic pollution: cleaning up plastic in the oceans without reducing plastic production is like mopping up an overflowing bathtub without ever turning off the water. Cleaning up plastic pollution, while important, is futile without stopping the source.

Tuning off the plastic spigot will not be easy, though. For a century, the U.S. fossil fuel industry has received tax subsidies, originally created to incentivize new energy sources. In 2015, the International Monetary Fund (IMF) calculated U.S. energy subsidies at $649 billion, with 80% going to natural gas and crude oil. Subsidies greatly reduce the cost of fossil fuel feedstocks and, therefore, the cost of plastic production.

“The low cost of virgin plastic resin means it is cheaper to make something out of that than out of recycled plastic,” Spring says. “One step is to use economic tools and incentives to rebalance that to create better recycling. Recycling can’t exist without subsidies, because we are subsidizing virgin production. It is always hard to undo a subsidy, so I’m not going to say whether that is doable or not. But we need fiscal support for recycling. It’s an area needing more attention.”

Other recommendations in the National Academies report include designing plastic materials and products with a demonstrated end-of-life strategy and creating a federal research and policy strategy focused on identifying, implementing, and assessing equitable and effective interventions across the entire plastic life cycle.

“Plastic doesn’t ever go away,” Spring says. “These carbon polymers persist in the environment. Even bio-based plastics, which people think may be more benign, have the same carbon backbone and are as persistent unless they are biodegradable. The ideal scenario would be a circular economy, which would help with both plastic pollution and climate change. Imagine creating a plastic product that would be endlessly recyclable.” In a circular economy, markets provide incentives for reusing products, rather than scrapping them and extracting new resources to make more products.

Plastic is a very useful product, she adds. The problems are what it is made from and what it becomes. “Nobody wants this stuff in the environment. No one thinks it’s a good idea. But there is a disconnect between production and end of life. There is no hope of dealing with it in a circular way if we put all the pressure on the end of the pipe. The idea is to have the people who are dealing with it at the end of life be a part of deciding how to create it. I would say the government is not clearly setting that as a priority.”

Globally, 27 countries have banned or limited production of specific plastic products (such as plates, cups, straws, and packaging) and materials (such as polystyrene). Forty-three have enacted elements of extended producer responsibility (EPR) for plastic bags and 63 mandate EPR for single-use plastics, including deposit-refunds, product take-back, and recycling targets.

“Producing less plastic would reduce GHG [greenhouse gas] emissions,” Spring adds. “If we’re looking at decarbonizing emissions, we have to look at all sources. An increase in production of plastic is increasing emissions at a time we’re trying to drive them down. Plastic in the ocean also may be undermining blue carbon processes and the ocean’s resilience to climate change.” Blue carbon is carbon stored in marine and coastal ecosystems.

According to one recently released study, expansion of plastic production will account for an estimated 56 billion metric tons of carbon-dioxide-equivalent in GHGs between 2015 and 2050. “Carbon dioxide equivalent” is a measure that compares emissions of different greenhouse gases based on their atmosphere-warming potential. The study authors found that if production and use of plastics increase in line with current plans, resulting greenhouse emissions could exceed those of 295 new 500-megawatt coal-fired power plants by 2030.

The authors point out that transport, use, disposal, mismanaged waste, and degradation of plastic also contribute to climate change. Even bio-based plastics have an effect, as land is needed to cultivate and grow the raw materials for its manufacture and some such plastics stimulate microbial metabolism as they degrade, which can release carbon dioxide.

The two “crises” of climate change and plastic pollution “are fundamentally linked,” the researchers say.

Breaking the Plastic Wave, a comprehensive report last year from The Pew Charitable Trusts and SYSTEMIQ warns that without action, greenhouse gas emissions associated with plastic production, use, and disposal in 2040 would account for 19% of the total emissions budget allowed under the Paris Climate Agreement’s scenario of limiting global heating to 1.5 degrees C. The Pew report outlines a strategy – including reducing production, increasing recycling, and substituting alternate materials – to transform from the current 95% virgin feedstock to 43% in 2040. Global demand for plastic would still increase, the authors note, thanks to a 23% increase in the population.

“There are a lot of economic incentives [in the U.S.] to produce more plastics,” says Alvarez. “Our study is an argument to reduce production of plastics.”

It’s only one of many such arguments.