Gains and disappointments from COP26, and now to tend to the gaps

The U.N. climate summit led to some incremental progress, but the path forward is still riddled with chasms that need to be bridged. A review of the meeting’s biggest outcomes and the emission-reduction challenges that remain. 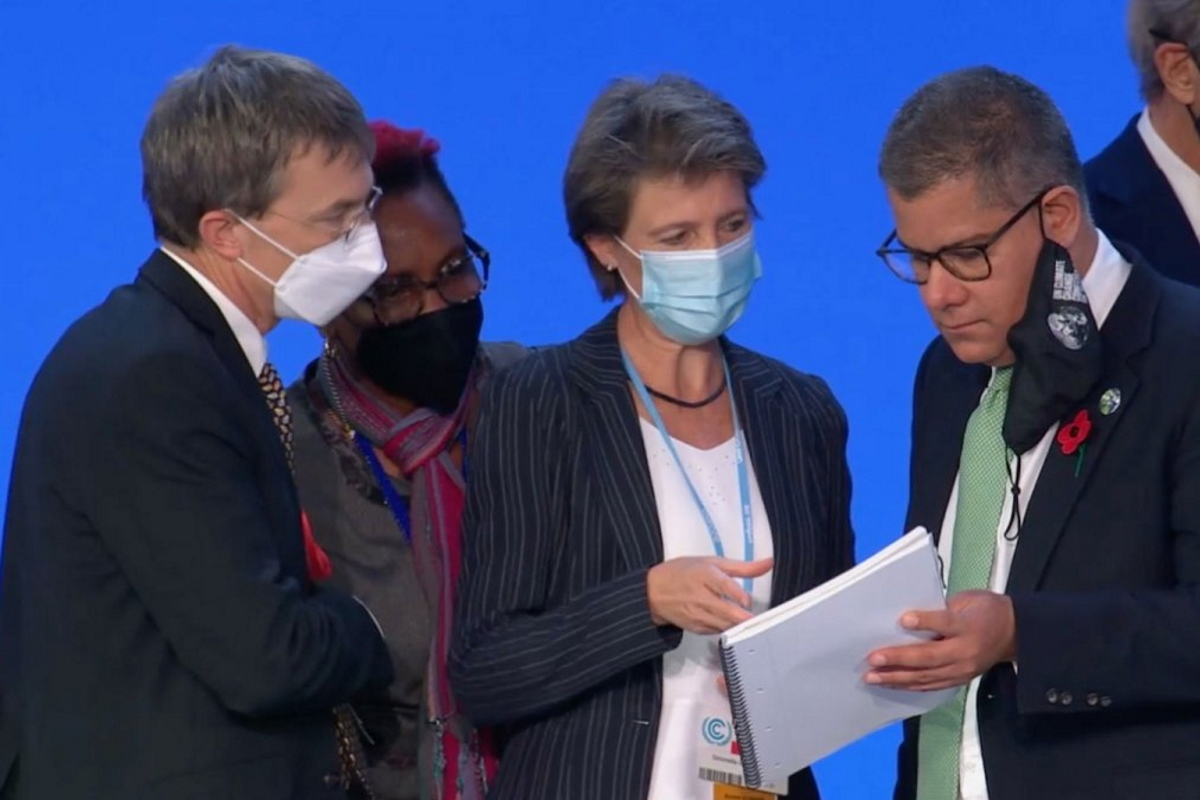 There was plenty for optimists to toast, and pessimists to curse, in the wake of the 26th annual Conference of Parties (COP) of the U.N. Framework Convention on Climate Change (UNFCCC), COP26. The wheels of diplomacy did turn in Glasgow, albeit far too slowly for those impatient with rhetoric and half measures. And if it didn’t produce any radical breakthroughs, the Glasgow meeting did throw new klieg lights on some yawning gaps that block resolution of the global climate challenge.

Below are some of the biggest outcomes from the meeting itself (which resulted in the Glasgow Climate Pact) and from adjacent diplomatic huddles, and then a look at the gaps that remain.

•  A speeded-up timeline for pledge updates: At the 2015 COP meeting in Paris, nations agreed to update their nationally determined contributions, or NDCs – their plans and timelines for greenhouse-gas emission cuts – every five years, starting in 2020 (postponed to 2021 because of COVID). Now, in a nod to the increasingly urgent need for dramatic cuts this decade, nations have been asked to update their NDC pledges each year, starting with the 2022 COP27 meeting in Sharm el-Sheikh, Egypt.

•  Complete rules of the road: Attendees finalized the “rulebook” that had been created by the Paris Agreement but never completed. The rulebook includes an update to carbon market mechanisms – which can be prone to such issues as double counting, where two parties claim credit for the same cuts – and an enhanced framework for transparency in how targets and emissions are tracked.

•  New net-zero pledges: India came on board during the Glasgow meeting with a net-zero-by-2070 pledge. It joined 49 other nations plus the European Union that have committed to net-zero pledges, most of them timed for 2050. How effective such ultra-long-term pledges can be is a wide-open question (see below).

•  New agreements on methane and deforestation: The Global Methane Pledge was formally launched on Nov. 2 at COP26. More than 100 countries, representing close to half of methane emissions related to human activity, signed on to a goal of cutting global methane emissions 30% by 2030 compared to 2020 levels.

Also on Nov. 2, the Glasgow Leaders’ Declaration on Forests and Land Use was unveiled. More than 140 nations representing more than 90% of Earth’s forests signed on to “halt and reverse forest loss and land degradation by 2030 while delivering sustainable development and promoting an inclusive rural transformation.”

•  Pledges to end fossil fuel extraction: Led by Costa Rica and Denmark, the Beyond Oil and Gas Alliance made its formal debut on Nov. 10. The lineup includes France, Greenland, Ireland, Quebec, Sweden, and Wales as core members, with California, New Zealand, and Portugal as associate members and Italy as a “friend.” (As of Nov. 15, the U.S. is not yet a member.) Core members agreed to “end new concessions, licensing or leasing rounds and to set a Paris-aligned date for ending oil and gas production.”

•  Enhanced support for climate-change adaptation: A fund for climate finance established with the 2009 COP meeting in Copenhagen called for wealthy nations (those responsible for the lion’s share of historical emissions) to contribute $100 billion per year by 2020. As of 2019, the most recent year available, contributions were running about 20% shy of that goal, and much of the funding so far has gone toward emission cuts rather than adaptation.

Rich nations agreed in Glasgow to double the share of their fund contributions going specifically to adaptation. They also agreed to supply $500 billion to the fund over the next five years. However, the U.S. and other rich countries made no collective move to establish a long-sought loss-and-damage fund, to the dismay of many activists and developing-country leaders.

Filipino lawyer Vicente Paolo Yu III, who served as lead negotiator on the platform for the Group of 77 developing nations (G77) and China, called the achievement one of the “few bright lights” at COP26, telling the website Rappler: “For developing countries, we felt it was really important that we come out of COP26 with a clear set of functions; we have a common understanding of what we want the network to do.”

•  A Joint Glasgow Declaration on Enhancing Climate Action in the 2020s, released by the United States and China: Though short on firm pledges, the agreement stressed an intent to “raise ambition” and cooperate in multiple areas. Joint U.S.-China progress could be a big deal, as the two countries long have been responsible for almost as much greenhouse gas as the rest of the world combined, generating about 46% of global CO2 emissions as of 2019. U.S. emissions have dropped over the past 15 years while China’s have vaulted, driven in part by a massive U.S.-to-China shift in the manufacture of goods consumed by Americans.

•  At last, a first mention of the words “fossil fuel:” Astoundingly, the Glasgow Climate Pact is the first document issued by any COP meeting to mention fossil fuels, with a call for “accelerating efforts towards the phasedown of unabated coal power and phase-out of inefficient fossil fuel subsidies.” Even that mild reference took days of wrangling to craft. A reference to coal “phase-out” was changed to “phasedown” after a last-minute request from India; that move, and the accepted phrase’s limitation to phasing out only “inefficient” fossil fuel subsidies, upset many participants and observers.

The yawning gaps that remain

Getting from “here” to “there” is a drawn-out affair when the ultimate “there” is a transformed world energy system. Among the gaps that remain unfilled after Glasgow:

•  Emissions – and credibility: Based on policies now in place and assumed technological gains going forward, the world can expect to warm by about 2.6-2.7 degrees Celsius above preindustrial levels by 2100, according to a meta-analysis from Carbon Brief. That’s far less than the 4.7°C of the latest high-end scenario from the Intergovernmental Panel on Climate Change (IPCC). Yet it’s far above the 1.5°C target enshrined as the optimal goal in the Paris Agreement and supported by a landmark 2018 IPCC analysis.

The picture brightens after taking into account nation-by-nation pledges for emission cuts by 2030 together with net-zero pledges, including recent ones from the world’s three largest greenhouse-gas emitters: China, the United States, and India. If all of these pledges are fulfilled, the projected warming this century drops to around 1.8°C. It’s not unreasonable to see that as a “big If.”

“While just seven years ago it seemed quite plausible that the world was on track for around [4°C] warming by 2100, a combination of climate policies and falling clean energy costs has flattened the curve of future emissions,” noted Carbon Brief.

The credibility gap lies in between the rosy net-zero pledges and a shorter-term imperative: to slash global emissions by 2030 to only half of 2010 values, in order to preserve a reasonable (two-thirds) chance of keeping long-term warming to no more than 1.5°C.

The UN’s latest Emissions Gap Report, issued just before the Glasgow summit, warned that the 2030 commitments “do not yet set G20 members (accounting for close to 80 per cent of [greenhouse gas] emissions) on a clear path towards net zero. Moreover, G20 members as a group do not have policies in place to achieve even the NDCs, much less net zero.”

There’s no enforcement mechanism in the Paris Agreement – it’s all voluntary – so it will come down to the willpower, legal heft, and political pressures exerted in each country to make the 2030 cuts happen and to continue pushing toward carbon neutrality.

•  Adaptation and finance: Although COP26 managed to renew the $100-billion-per-year commitment from rich countries, and it ended with a call for “significantly increasing support,” the meeting made no further headway in securing the vast sums needed by the poorest and most vulnerable countries to address ongoing and imminent climate change.

The UN’s latest Adaptation Gap report, issued during the Glasgow summit, warns that the annual costs of adaptation in developing countries may hit the range of $280-500 billion by 2050. The report also stressed the opportunity that was largely lost to incorporate climate adaptation into COVID relief efforts, and it noted pressures that COVID-related debts could put on future adaptation funding.

On the plus side, “climate change adaptation is becoming increasingly embedded in policy and planning across the world,” according to the report.

“We need a step change in adaptation ambition for funding and implementation to significantly reduce damages and losses from climate change. And we need it now,” said U.N. Environment Programme executive director Inger Andersen in the report.

Other crevasses in the way

Beyond these widely acknowledged shortfalls, there are other gaps to consider:

•  Accounting: A major Washington Post analysis found that the total greenhouse emissions reported nation-by-nation to the U.N. is as much as 23% lower than scientists’ global-scale emission estimates, a shortfall that could play havoc with pledge accounting.

•  International shipping and aviation: Though they make up an increasing share of total global greenhouse emissions, these activities typically fall through the cracks of the COP process, as they don’t “belong” to any single country. A group of 23 countries, including the U.S., did launch an International Aviation Climate Ambition Coalition on Nov. 11, urging the International Civil Aviation Organization and individual countries to pursue a net-zero-by-2050 stance within aviation.

Despite these and other gaps, there were enough promising outcomes in and around the Glasgow meeting – what U.N. Secretary General António Guterres called “building blocks for progress” – to keep many of the most dedicated scientists, activists, and diplomats looking to 2022 and beyond with at least glimmers of hope.

“Some of the oldest and most magnificent bridges in the world can be found here in Scotland … but bridges are meant to be crossed, and cross we must.

“The waters of the climate emergency are rising rapidly. We must continue to fight for hope.”

Bob Henson, a contributing editor of Texas Climate News, wrote this article for Yale Climate Connections, where it was first published. A meteorologist and science writer based in Colorado, Henson is the author of “The Thinking Person’s Guide to Climate Change.”