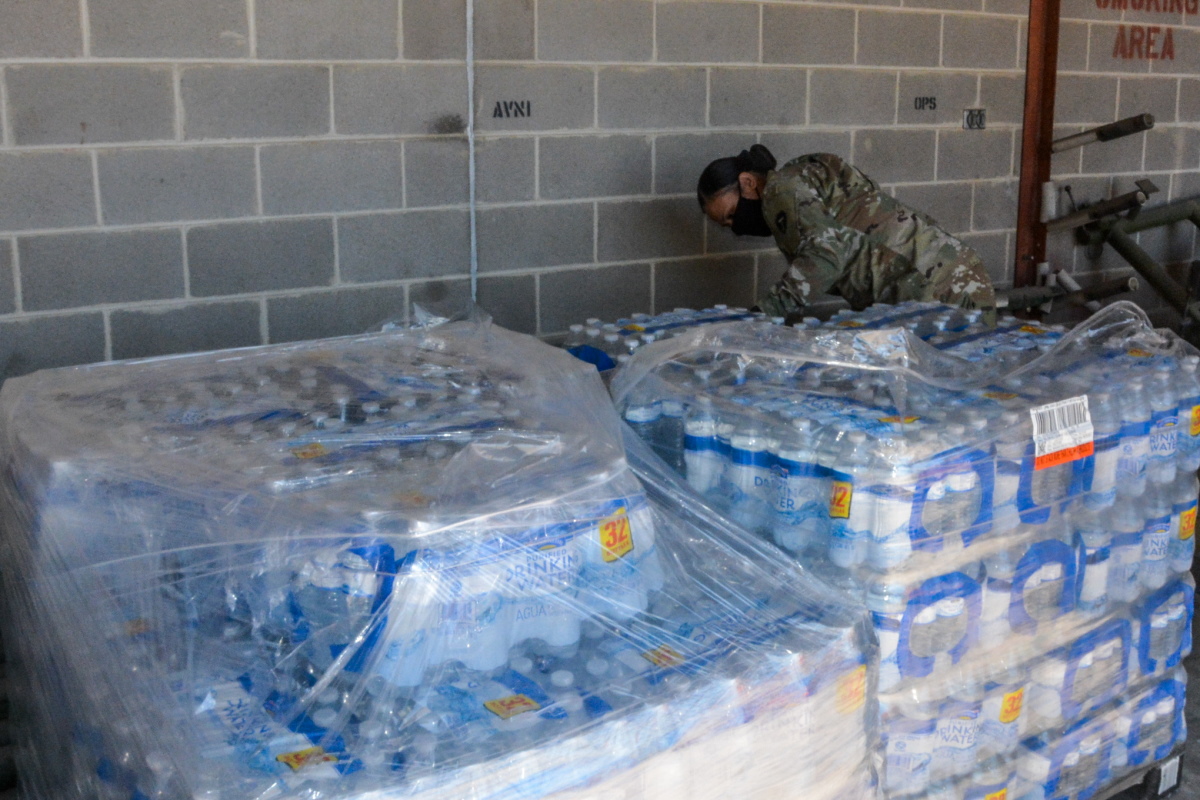 Sgt. Baselisa Arevalo of the Texas Army National Guard inventoried bottled water before it was delivered to Texans impacted by Winter Storm Uri. National Guard, CC BY 2.0, via Flickr

TCN Digest presents our summary selections of recent news with a common theme or a close connection, enhanced with explanatory context and links for further reading.

Water worries are a central element of growing concerns about climate change, which sometimes contributes to meteorological situations with far too much rain and sometimes to others with way too little.

Either way, both flooding and drought/heat wave conditions, along with other extremes like brutally cold weather, can tax water utilities and heighten the difficulties for those that manage their crucial infrastructure.

Recent reports cast new light on those challenges – one specific to Texas and the other with a global focus.

Writing in the online publication Texas+Water, its editor Todd Votteler recently summarized the findings of a survey of water utilities in the state.

Six months after Winter Storm Uri severely disrupted power, heat and water service to Texans, 79% of the water-utility managers said they remain “concerned that the reliability of the Texas energy grid could affect their operations,” Votteler wrote.

(A report issued in March by the University of Houston’s Hobby School of Public Affairs detailed the dangerous hardships that Texans faced during Uri: “More than two out of three Texans – 69% – lost electricity at some point during Winter Storm Uri last month for an average of 42 hours, while almost half – 49% – lost access to running water for an average of more than two days.”)

Votteler added that the American Society of Civil Engineers recently gave Texas only a C grade on its 2021 infrastructure report card. He posed four questions for Texans to consider:

Is Texas ready to take advantage of the opportunities that could present themselves should Congress approve the Infrastructure Act? Can Texas meet the additional water needs as the population grows from 29.5 million to 51.5 million by 2070? Can Texas handle another event like Winter Storm Uri next year or the year after? And finally, is the state prepared for more drought – the bane of Texans’ existence – like the seven-year drought of record in the 1950s, let alone droughts supercharged by climate change?

Winter Storm Uri laid bare the fragility of the Texas power grid, and Texas’ aging water infrastructure is just as fragile. Adapting to the new ‘abnormal’ will require action. Texans need to decide whether to meet these challenges head-on, or just hope for the best.

Earlier this month, in a complementary warning with a global focus, the U.N.’s World Meteorological Organization declared that most nations are not ready for a “looming” water crisis that climate change and a growing population are creating.

Worldwide, water supplies are declining by a half-inch per year, and by 2050 water access for 5 billion people could be inadequate for at least a month per year, the WMO predicted in the report. The agency blamed “intensification” of the water cycle resulting from a warming atmosphere, illustrated by a 134% increase in flood disasters and 29% rise in drought disasters over the past two decades.

The increasing average heat underlying those statistics did not relent this year. The summer of 2021 was the hottest on record in the contiguous U.S., according to the National Oceanic and Atmospheric Administration (NOAA). The season was marked by “notable climate and extreme events,” including the 150-mph Hurricane Ida, multiple deadly floods and severe wildfires, the agency said.

A wide-angle appraisal produced a parallel finding: The Northern Hemisphere’s 2021 summer was its hottest on record in terms of land temperatures, according to data collected by Berkeley Earth, an independent, nonprofit data science organization.

Texans know all too well about drought disasters, particularly the record-setting drought and heat wave of 2011, which stressed water and power utilities, created $7 billion in agricultural losses and ignited wildfires.

Even worse than we thought

Subsequent studies concluded that the long-lasting episode was aggravated by climate change. Now, a new study led by University of Texas geoscientists has concluded that the drought was even more severe than people thought at the time, based on reports from the authoritative U.S. Drought Monitor (USDM).

The UT researchers, with colleagues at the Chinese Academy of Sciences, included extra satellite data in a computer model that measures drought severity. They found the 2011 drought was “more widespread and longer lasting” than the USDM had determined, a university report said.

The updated model simulation and the USDM were in agreement when it came to the geographical extent of the drought. But the updated model simulation showed that more areas were experiencing more severe drought than determined by the USDM, particularly in the western half of the state. The new model also found that widespread drought started in 2010, much earlier than the USDM….

The researchers said that developing methods for better understanding droughts is important to Texas as policymakers try to determine how the state’s water resources will be affected by climate change and population growth.

In a recently released update to a report first issued in 2020, Texas state climatologist John Nielsen-Gammon reiterated his earlier prediction of more extreme heat in Texas by 2036 (including a near-doubling of 100-degree days at typical locations, compared to 2000-2018). Most related factors also point to “increased drought severity,” he concluded.

In the nearer term, both Texas and the nation’s only state with a larger population, drought-stricken California, can look ahead to more drought conditions in the months ahead, according to NOAA’s latest prediction.

The agency’s Seasonal Drought Outlook for Oct. 21 through Jan. 31, 2022, shows drought developing or persisting over almost all of Texas and persisting over all of California. Those forecasts are part of a multi-state pattern of drought that NOAA sees occurring across a vast swath of the West and Great Plains, aggravated by La Niña conditions.

California, where a years-long drought continued this year, set several new records for the severity of heat and drought this year.

Texas+Water is a monthly newsletter published by The Meadows Center for Water and the Environment at Texas State University, the peer-reviewed Texas Water Journal, and the Texas Water Resources Institute at Texas A&M University. The Meadows Center is a supporter of Texas Climate News with funding provided by The Meadows Foundation, a private philanthropy in Dallas. Texas Climate News editors and writers make all editorial decisions independently, with no direction or influence from our funders.

John Nielsen-Gammon is a member of TCN’s volunteer Advisory Board, serving solely in his role as regents professor of atmospheric sciences at Texas A&M University.