A new national poll found increases in Americans’ agreement that global warming is happening, their worries about it and support for climate action. Will the surge translate into passage of bills stalled in Congress? 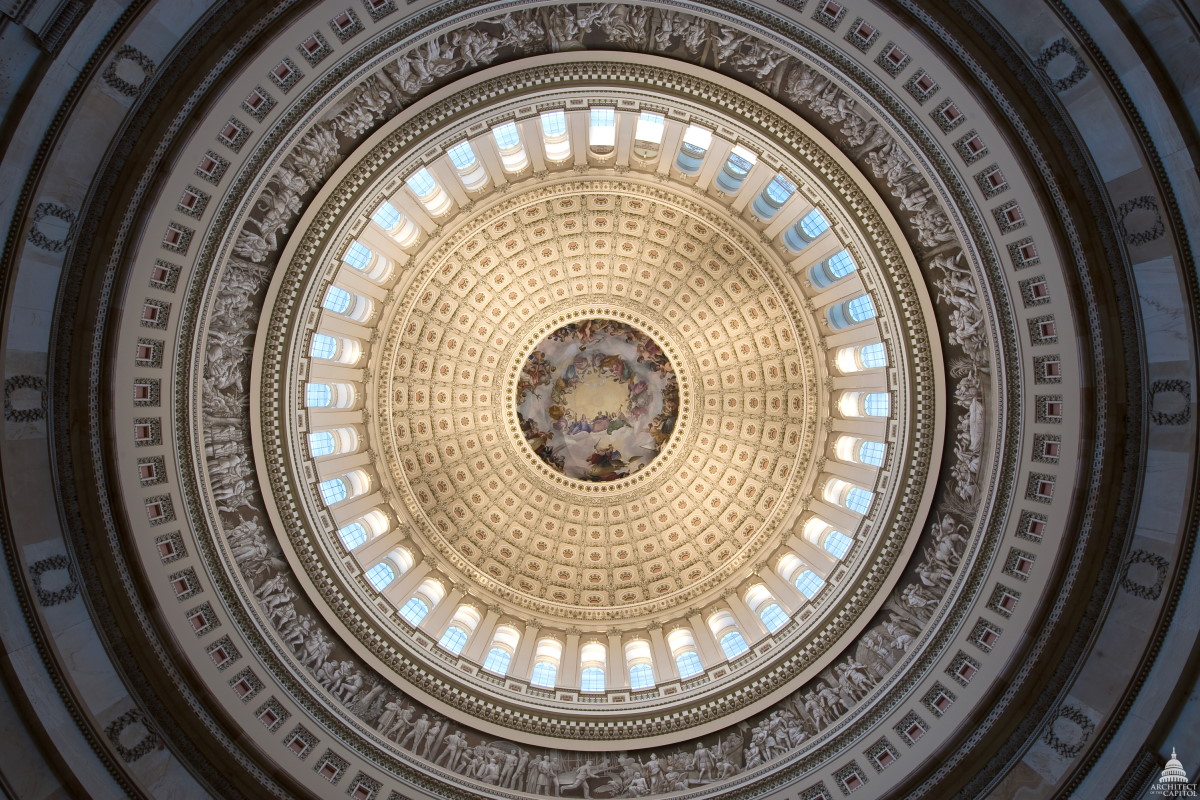 The Frieze of American History surrounding the Apotheosis of Washington in the United States Capitol rotunda. Architect of the Capitol via Wikimedia Commons

As 2021 unfolded month by month, a far-flung series of extreme weather events increasingly battered the United States, extending from record drought and wildfires in the West to uncommonly deadly floods in the Northeast.

Climate-action advocates have worked tirelessly to increase public understanding of the links that scientists say exist between extreme weather and human-caused climate change.

Perhaps linked to those messages and this year’s litany of weather extremes, Americans’ worries about climate change and support for federal action to fight it increased “dramatically” over the past six months, opinion researchers at Yale and George Mason universities found. They released their new national survey results last week.

The poll, conducted in September, was the team’s first on climate issues since March. It’s the latest nationwide survey in the Yale-George Mason collaboration’s “Climate Change in the American Mind” project, launched in 2008.

Key results from the new poll’s findings about the public’s growing climate concerns:

All-time high majorities also now worry about global warming (70% – 35% “very worried” and 35% “somewhat worried”) and believe people in the U.S. “are being harmed right now” by that climate trend. The 55% holding that latter opinion marks the first time a majority of respondents said the harm is already happening, not just a future concern.

There were also increases since March in support for climate action across party and ideology:

Among conservative Republicans – historically by far the group least supportive of climate action – the portion backing it as a priority now remained small but did jump to 17% from 12% in March and 10% in April 2020.

The poll demonstrated the durably strong (and now growing) support for climate action among Democrats.

Nonetheless, the legislative effort by President Joe Biden and congressional Democrats to blunt pollution-driven climate disruption and help strengthen the nation’s ability to withstand increasingly severe impacts remains stalled in Congress. That effort involves a pair of sweeping bills whose fates are tied together in bargaining among moderate and progressive Democrats.

One of the measures is a multifaceted package for $3.5 trillion in spending over 10 years on social programs and efforts to slash climate-disrupting emissions. The other is a $1 trillion infrastructure proposal, passed by the Senate on a bipartisan vote, which includes new spending on some climate components such as resiliency programs, along with traditional infrastructure items like roads, bridges and airports.

The Washington Post reported Saturday that one important point of discussion among Democrats is whether to pare back spending on all parts of the larger, social/climate measure, or to drop some parts altogether and fully fund the remainder. The New York Times reported Monday that business interests “are lobbying hard to kill or reshape crucial pieces of the president’s plan.”

Another recent poll’s findings highlighted another factor that may also figure in Democrats’ negotiations about whether and how much to cut climate programs.

Axios reported last week that Hit Strategies, a Democratic polling firm, had found in a poll of Black voters, a crucial constituency for the party, that they support pairing both climate and social programs in the broader, $3.5 trillion bill.

Climate measures in the smaller infrastructure bill were also tied as the Black poll respondents’ top priority among the infrastructure measure’s programs.

Seventy-one percent of those who were polled said they want Congress to go beyond physical infrastructure to approve new spending on programs proposed in the social/climate bill – “invest(ing) in reversing climate change, skills training programs, free community college, and providing more help to children, caregivers, and the disabled.”