How easy is it for one person to go carbon-neutral in the U.K.? Not all that easy, it seems. Paul Brown, an editor of Climate News Network and former Guardian correspondent, describes his long effort. 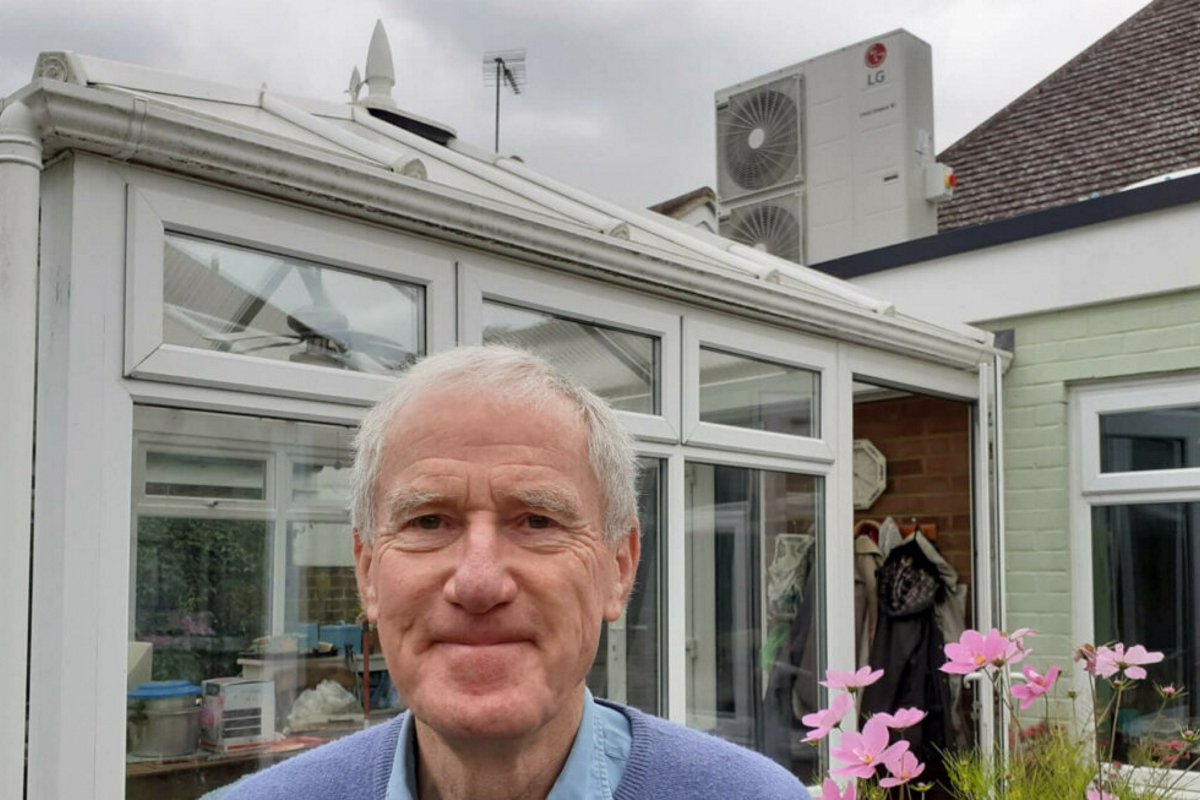 Paul Brown with his air-source heat pump installed at last on the sedum roof. Courtesy of Clara Brown

My journey to cutting my own carbon emissions began ten years ago with moving house. Our 1930s bungalow needed a new roof and updating – an opportunity to put into practice some of the carbon-saving schemes that had filled so many column inches and helped earn my living down the years.

The refurbishment was an opportunity to pack large amounts of insulation into the roof, walls and under the floor. More light entered the building through triple-glazed skylights installed in a green roof. Then came solar panels and a wood-burning stove.

The building works were essential anyway, so the extra cost of a bungalow that was warmer, lighter and cheaper to run was fairly small. Adding a second conservatory for a cactus collection was a luxury, but later proved a valuable passive heating source, especially in spring and autumn.

Selling the surplus electricity from the solar panels to the grid made me feel better too, as well as netting £1,000 (U.S.$1,375) a year from the U.K.’s then generous government feed-in tariff. When the sun was not shining and we needed to buy electricity, it came from a company relying on its own wind and solar sources.

The bungalow still used a gas-condensing boiler for heating water – a long way from carbon neutrality. The next step, when the old petrol car died, was to buy the smallest hybrid on the market, promising 80 miles per gallon and achieving an average of 60.

For a short while this was enough, but an unexpected financial windfall was an opportunity to pay for the installation of an array of solar panels on the roof of the local community centre. This became my personal carbon offset scheme and still cheers me up whenever I walk past it. The panels also provide income for the community.

So far, so good. But despite its wood-burning stove, the bungalow still needed plenty of gas for both hot water and central heating, creating a sizeable carbon footprint. Earlier this year I received an offer to install an air-source heat pump.

There were a few hoops to jump through before installation – like proving my home had been improved as much as it could be in terms of energy efficiency. Fortunately it passed an expensive survey with flying colors.

The installation took three days. The heat pump was anchored on the green roof for maximum efficiency and the gas boiler was removed.

Up to then every step I’d taken towards carbon neutrality had been relatively easy in terms of gaining feed-in tariffs and complying with paperwork. The heat pump subsidy and getting rid of the gas supply, however, proved harder.

The U.K. government’s heat pump subsidy scheme is operated by the consumer watchdog Ofgem, Britain’s energy regulator. Filling in its forms online was difficult because many questions were technical and inevitably, despite my best efforts, it decided some answers were wrong.

Bizarrely, this led to my being accused of attempted fraud and possible money laundering in my attempt to get a subsidy for installing the heat pump.

I had to send copies of my bank statements and driving license to a web address my computer told me was not secure. It took a full four months of email exchanges and telephone calls to the “help” line to solve these problems. Just when I thought I would have to get my Member of Parliament involved on my behalf, Ofgem unexpectedly relented and awarded me the grant.

Meanwhile a second battle was under way. The gas company continued to charge its 30 pence (41 cents) daily standard rate for a gas supply that I no longer used or wanted. This would amount to £100 ($138) a year. To stop this charge continuing indefinitely we were told we had to have the gas meter removed.

Despite repeated attempts this proved almost impossible to organize – removing a gas meter was apparently an unheard-of service, and a meter could not be removed unless the householder paid another £800 ($964) to have the gas supply removed entirely from the property, back to the main supply pipe beneath the road.

This was necessary, we were told, because if the meter was removed and the gas pipe remained we could easily steal the gas. Charming!

Eventually, after much emailing, a few telephone calls and unkept appointments, a very competent gas fitter turned up and removed the meter. The gas supply pipe remains, but is sealed shut.

Time, and the coming winter, will tell whether the heat pump works as well as the gas, but just at the moment it is good to feel free of fossil fuels. While it will never be possible to atone for all those journalistic flights and carefree foreign holidays, I am, at least, at last no longer making things worse.

This article was originally published by U.K.-based Climate News Network, which is run by veteran journalist volunteers who have covered climate change for many years for international newspapers and broadcasters and are now freelancing. Paul Brown is a founding editor of Climate News Network and was previously an environment correspondent for The Guardian.