‘Code red for humanity’: The IPCC report’s meaning for the world and Texas

Human-caused warming of the earth is “unequivocal,” the new scientific assessment’s authors declared. “This report must sound a death knell for coal and fossil fuels,” the UN secretary-general said. 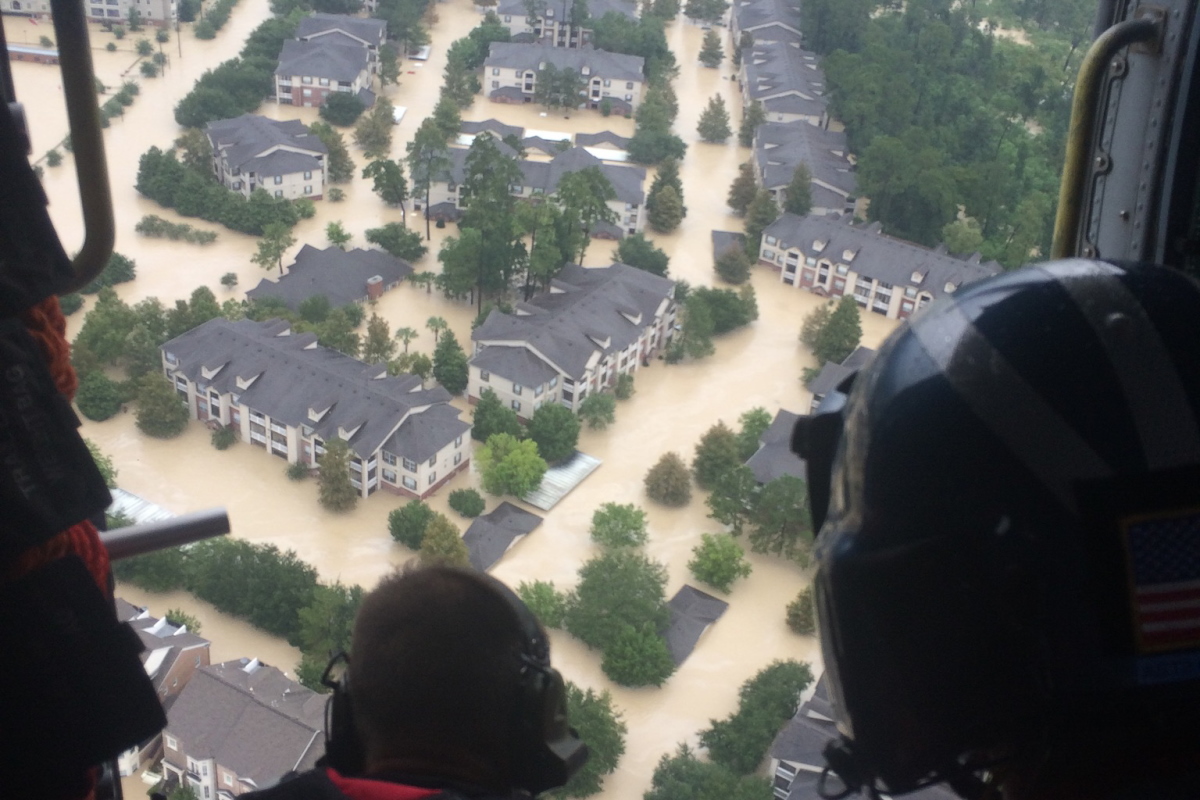 For the sixth time since 1990, the United Nations-based Intergovernmental Panel on Climate Change is updating the world’s most authoritative guidance on what to expect as human-produced greenhouse gases push our planet into realms that society has never before faced.

This first release from this effort is “a code red for humanity,” and should signal an end to fossil fuel use, said U.N. Secretary-General António Guterres.

The IPCC – a volunteer body that includes many hundreds of scientists from around the globe – will be releasing its Sixth Assessment Report in stages over the next year. The first major release, which arrived on Monday from the panel’s Working Group I, evaluates the physical science that undergirds climate change. Subsequent reports from two other working groups will examine impacts, adaptation and vulnerability, as well as techniques that could be used to rein in climate change, known collectively as mitigation.

This time around, the news from the IPCC’s update assessment is as bad as one might expect, yet the panel stressed there is still time to avert the worst upheavals that a changing planet could bring.

Can we still avoid ending up on the bad side of the now-infamous threshold of 1.5 degrees Celsius of warming above preindustrial levels, put forth as an ideal by almost 200 nations in the 2015 Paris Agreement and underscored in a special IPCC report in 2018?

“The answer is yes—but unless there are immediate, rapid, and large-scale reductions of all greenhouse gases, limiting global warming to 1.5 will be beyond reach,” said Maria Rojas Corradi, a coordinating lead author of the report’s opening chapter and director of the University of Chile’s Center for Climate and Resilience Research, in a briefing for reporters on Sunday.

The panel’s new best estimate for sea level rise this century is around 0.5 meters (1.6 feet) under the most optimistic scenario. If emissions were to continue unabated, a rise of 1 meter (3.3 feet) by 2100 is more likely. Either way, most of the increase will occur after 2050, but some sea level rise will continue for centuries afterward, the panel warned.

The report heightens the scientific case for urgency in reducing fossil fuel use. Only one of the five new emission scenarios with varying levels of heat-trapping pollution keeps global temperature from surging well past the 1.5 C threshold for decades to come. In that scenario, carbon dioxide (CO2) emissions are cut in half by the early 2030s and the world becomes carbon neutral by the 2050s. This is roughly in line with ambitions announced over the past year by the United States, China, and the European Union, which together represent almost 30% of global population and more than half of the world’s CO2 emissions.

A profound message for Texas

The potential implications of such wholesale emissions cuts for Texas’ oil and gas industry – as well as the state’s growing renewables sector – are obvious and profound.

“Today’s IPCC Working Group 1 Report is a code red for humanity. The alarm bells are deafening, and the evidence is irrefutable,” Guterres, the U.N. secretary-general. said in a written statement on Monday. “This report must sound a death knell for coal and fossil fuels before they destroy our planet.” Guterres called for an immediate halt to oil and gas exploration and new coal plants and a phase-out of coal use in the 2030s.

The Covid-19 pandemic put a crimp on fossil fuel burning last year, with reduced transport and less heating and cooling of shuttered factories and offices. As a result, carbon dioxide emissions from human activity dropped by nearly 6% below 2019’s levels, the biggest one-year percentage decline since World War II. Even so, more than 30 billion tons of climate-warming CO2 were spewed into the air in 2020, and an uptick is virtually guaranteed this year.

Fed by these gases, global temperature’s relentless upward climb has reached heights well beyond those documented in the last major assessment, in 2013–14.

“We can now say that global surface temperatures are reaching levels not seen in at least 100,000 years, and that the rate of warming since 1970 is higher than any 50-year period in the last 2000 years,” said Kim Cobb, director of Georgia Tech University’s Global Change Program and one of the new report’s lead authors for Chapter 1.

While the worst heat waves and the heaviest rainstorms continue to intensify in many parts of the world, it’s the multi-pronged threat of compound extremes that drew new attention in the latest report. One example is “hot droughts” – the increased tendency for record heat and severe dryness to occur in sync, as they did across Texas to dire effect during 2011. 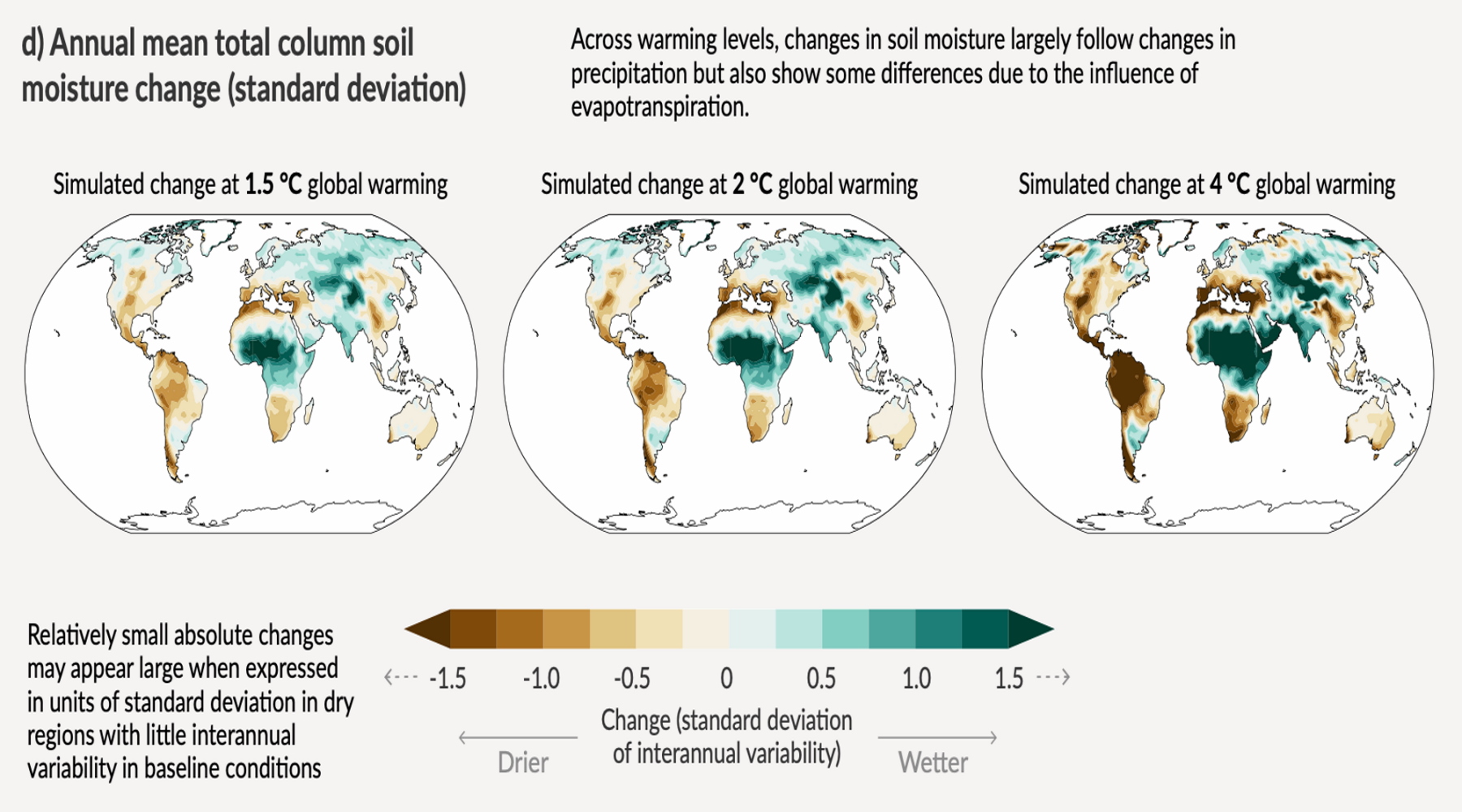 Even though a changing climate is expected to boost precipitation across much of the central and eastern U.S., rising temperatures will still tend to deplete soil moisture across much of the Great Plains, including Texas, as depicted in this graphic from the new IPCC assessment. IPCC Summary for Policymakers, AR6 WGI report.

Another growing threat is compound flooding, such as when a hurricane storm surge plows into a coastal area that’s already dealing with runoff from extreme rains. Compound flooding was a major issue during Hurricane Harvey in 2017, as onshore winds and water collided with massive runoff into Galveston Bay.

To craft each of its major assessments, the IPCC reviews a vastly increasing body of science, including more than 14,000 papers for the new report. The panel’s first assessment, in 1990–91, drew on some 1,800 weather stations worldwide; the latest incorporates data from 40,000 sites. The resolution of core global climate models (the distance between each point where the model simulates climate) has gone from 500 to 100 kilometers, with regional models now as sharp as 25 kilometers.

The new report emphasizes that a great deal of climate change’s impact is linear: the more greenhouse gas is pumped into the air, the more change we can expect. Yet there are also potential tipping points waiting in the wings, such as the small but frightening chance that Antarctic ice sheets could destabilize, causing massive sea level rise, or that a primary North Atlantic ocean current could abruptly collapse, chilling parts of Europe and North America. Neither outcome is predicted by IPCC to occur this century – but neither could the panel rule them out entirely.

“The more we push the climate system from the state that it’s been in for the last several thousand years, the greater the odds that we cross thresholds that we can only poorly project,” said Robert Kopp, director of the Rutgers Institute of Earth, Ocean, and Atmospheric Science and one of the authors of the latest report’s Summary for Policymakers.

The latest assessment will inform the work of negotiators set to gather in Glasgow this November for the 26th annual Conference of Parties to the UN Framework Convention on Climate Change (COP26). Billed as the United Kingdom’s biggest diplomatic meeting since World War II, COP26 will see a concerted push for nations to adopt tough new emission targets.

Bob Henson is a contributing editor of Texas Climate News. A meteorologist and science writer based in Colorado, Henson is the author of “The Thinking Person’s Guide to Climate Change.” A more detailed article by Henson about the new IPCC report can be found at Yale Climate Connections.