Republicans and Democrats in the Legislature co-sponsored a measure to ensure Texas plays a leading role in the transition to electric vehicles. The House bill easily won committee approval but never came to a floor vote. 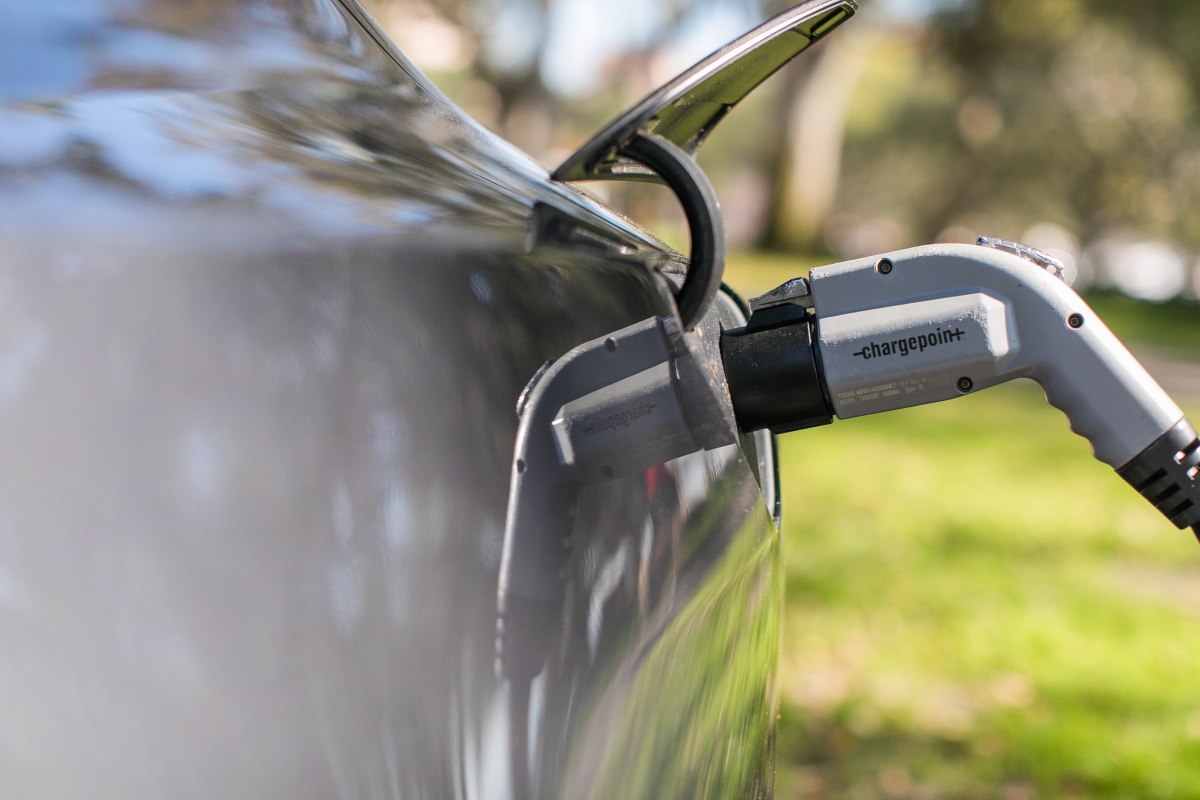 A recurring theme in 20th-century pop-science magazines was the rise of exotic technologies that would put a quick end to our cars’ old-school internal combustion engines. Onboard nuclear reactors, electromagnetic propulsion and other space-age gizmos certainly could fire the imagination. Alas, they were mostly science fiction. The stubbornly versatile piston engine, on the other hand, was an actual thing. It worked, and it got you where you wanted to go. And so, from the 1880s into the 2020s, not only did it not die – it dominated.

Now, however, the long reign of the internal-combustion engine really is winding down. Petroleum-powered transport faces a checkmate of assorted roadblocks: the tightening of emissions regulations worldwide, outright bans of fossil-fueled vehicles in a growing number of city centers, and the dawn of long-range electric cars and trucks that pair unmatched operating efficiency with zero tailpipe emissions.

Much of this churn is in the service of slashing carbon output and throttling back humanity’s contribution to climate change. One by one, automakers are going public with plans to kill off their gasoline- and diesel-burning models over the next five to 15 years.

To take full advantage of this colossal shift in the way we get around, Democrats and Republicans in the recently concluded 87th Texas Legislature co-sponsored a bill to ensure that the Lone Star State would play a leading role in the transition.

House Bill 2221 sought to establish a statewide, border-to-border electric-vehicle charging network, simplify EV rebates with extra incentives for electric pickup trucks (this is Texas, after all), institute a $100-per-year road-use fee for each Texas EV to make up for lost gasoline-tax revenue, and establish an EV-battery recycling program, among other details. The idea was to ease the inevitable transition to EVs while giving Texas a competitive leg up over peer states facing the same set of issues.

But like so many other environmentally flavored bills in the Texas Capitol over the years, HB 2221 shorted out before it could come to a vote. Some EV advocates and Democratic lawmakers believe that a faction of House members, sensing a threat to oil-and-gas interests, quietly suffocated the measure by intentionally slowing down its progress.

The bill had passed the State Affairs Committee on a vote of 10 ayes, two nays and one absent. And even though it had been sent to the Calendars Committee for scheduling, its forward motion finally stopped cold in late April. It never was slated for a House floor vote.

Others have suggested that the session was simply too busy to work the bill in, particularly as legislators wrestled with overhauling management of the power grid in the wake of February’s catastrophic statewide blackout triggered by winter storm Uri.

If Capitol support for HB 2221 was in short supply, there was plenty of irony to go around. At about the same time Texas politicians were tapping the legislative brakes on EVs, car manufacturers worldwide were putting the pedal to the metal.

Before the session started, a who’s-who of automakers, including General Motors, Ford, Volvo and Jaguar-Land Rover, announced that their product lines will be fully electric no later than 2035, and as early as 2025. Soon after the session’s conclusion, Fiat proclaimed its plan to go all-electric by 2030, Audi asserted that in 2026 all of its newly introduced vehicles will be electric, and G.M. said it will hike funding of its EV development from a previous $27 billion to $35 billion by 2025. Volkswagen disclosed that it will stop development of internal-combustion engines starting in 2026, and will completely phase out gas and diesel cars in Europe between 2033 and 2035, with a similar plan for the U.S. to follow.

Tesla, the electric-only marque that is building a giant Gigafactory Texas manufacturing plant near Austin, reported first-quarter 2021 sales up 74% compared to a year earlier. And, in a broader sign that the transition to EVs is no fluke, sales of all electrified vehicles in the U.S. rose 81% in the first quarter of this year, compared to a bump of just 13% over the same period for the auto market overall.

Texas elected officials, though reluctant to lend much government backing to the trend, are nevertheless waking up to its economic prospects and may face more pressure to act in future legislative sessions, said Tom “Smitty” Smith, executive director of the nonprofit Texas Electric Transportation Resources Alliance, TxETRA, originator of the Electric Transportation Act on which HB 2221 was based.

“The realization has hit the Legislature that electric vehicles are big business,” Smith said. “There are a total of seven electric-vehicle manufacturing companies here in Texas that are located all over the state, and there are literally hundreds of component manufacturers – computer-related things, gaskets and seals, what have you – that reside in about 200 [out of 254] counties in the state. So, the business lobby of those manufacturers and suppliers has started to get engaged and is saying, ‘If you encourage electric vehicles to come, we will create jobs in your district or in Texas.’ And that’s been a major sea change.”

According to the Texas Advanced Energy Business Alliance, about 7,000 Texans are employed directly by the electric vehicle industry, a number that is expected to nearly double in the next two years as Tesla and other EV-producing companies, like heavy-truck manufacturer Navistar in San Antonio, staff up.

With more and more battery-electric vehicles on Texas roads, and with the state’s EV industry poised to take off, will lawmakers ever pass comprehensive legislation to promote those businesses and help EV drivers?

“Regardless of whether any of the top EV bills passed, I am encouraged that more and more of my colleagues are beginning to accept the reality that EV use is growing and that we need to face the challenges they bring,” said House Transportation Chair Terry Canales, an Edinburg Democrat who introduced HB 2221 in the last session. “I believe we will see more legislation passing next session to address some of those challenges.”

But Canales is less sanguine about the future of green legislation in general. “All three branches of government are run by Republicans, and much of Texas’ budget originates from oil- and gas-related tax revenue,” he said. “Moreover, we just had one of the most conservative and extreme-right legislative sessions in the history of the state. There are small legislative victories here and there, but I don’t see any transformative pro-climate legislation passing until the branches of Texas government start becoming more moderate.”

The Texas Republican Party Platform’s position on the environment lends credibility to Canales’ pessimism. Article 21 of the platform, which addresses environmental issues, states in part: “We support defunding of ‘climate justice’ initiatives, the abolition of the Environmental Protection Agency, and repeal of the Endangered Species Act.”

Both the creation of the EPA and the landmark Endangered Species Act were Republican-backed initiatives signed into law by Republican President Richard Nixon.

Repeated efforts seeking Republican leaders’ comments for this article were unsuccessful. See the author’s note below.

Electric vehicles did chalk up a couple of modest gains during the session. A proposal to populate state parks with EV charging stations, introduced by Rep. Ken King, a Republican from the small Panhandle city of Canadian, was adopted as a budget amendment. And one element of the doomed HB 2221 reappeared in the successful Senate Bill 1202, authorizing the Public Utility Commission to exempt owners and operators of EV charging stations from being categorized as electric utilities. But another bill, aimed at giving EV owners a choice between a flat annual registration fee (from $190 to $240 depending on vehicle weight) or a mileage-based fee (from $30 for 3,000 or fewer miles to $190 for 12,001 miles or more), failed. [The bill’s fee structure was incorrectly reported in an earlier version of this article.]

The market moves on

In the meantime, market forces are at work. On June 30, General Motors and a power company owned by Shell Oil announced a partnership to provide Texas customers with electric service sourced from renewable energy, along with free overnight charging for owners of G.M. EVs. And charging infrastructure continues building out around the state despite lawmakers’ inaction, with 1,407 charging stations and 4,117 outlets operating in Texas at last count.

On balance, the 87th Texas Legislature left EV advocates disappointed but not necessarily disheartened. “HB 2221 was a moderate solution to many important EV issues,” Rep. Canales said, “and although it didn’t pass, we have some time to improve upon it over the interim before the next session.”

But Smith, the TxETRA director, believes the answer may lie outside of the statehouse. “The big thing that failed this session was the development of a plan on how to place chargers from border to border, and in rural areas and low-income areas, so we don’t repeat the digital divide issues [related to uneven internet access] we had during the pandemic.”

TxETRA and other EV advocacy groups are now looking at work-around strategies that would involve state and federal agencies, including employing funds from the Biden administration’s pending infrastructure plan, while largely bypassing the implacable Texas Legislature.

“It’s important because the federal government is now saying they want to put half a million chargers up around the country,” Smith said. “It’s a great time to use federal money and some state money to put [chargers] in places that would help people, but where they would otherwise not go. Industries and competitive charging companies could then put them places where the market is likely to exist, like Buc-ee’s, or the big commercial centers.”

Author’s note: Texas Climate News reached out multiple times to a number of Republican legislators for comment for this story, including all three of the Republican joint authors of HB 2221. We also attempted to contact the state Republican Party’s communications organization. All but one of our queries went unanswered. State Rep. Craig Goldman’s office returned our call, but Goldman, of Fort Worth, was said to be traveling and unavailable for comment.