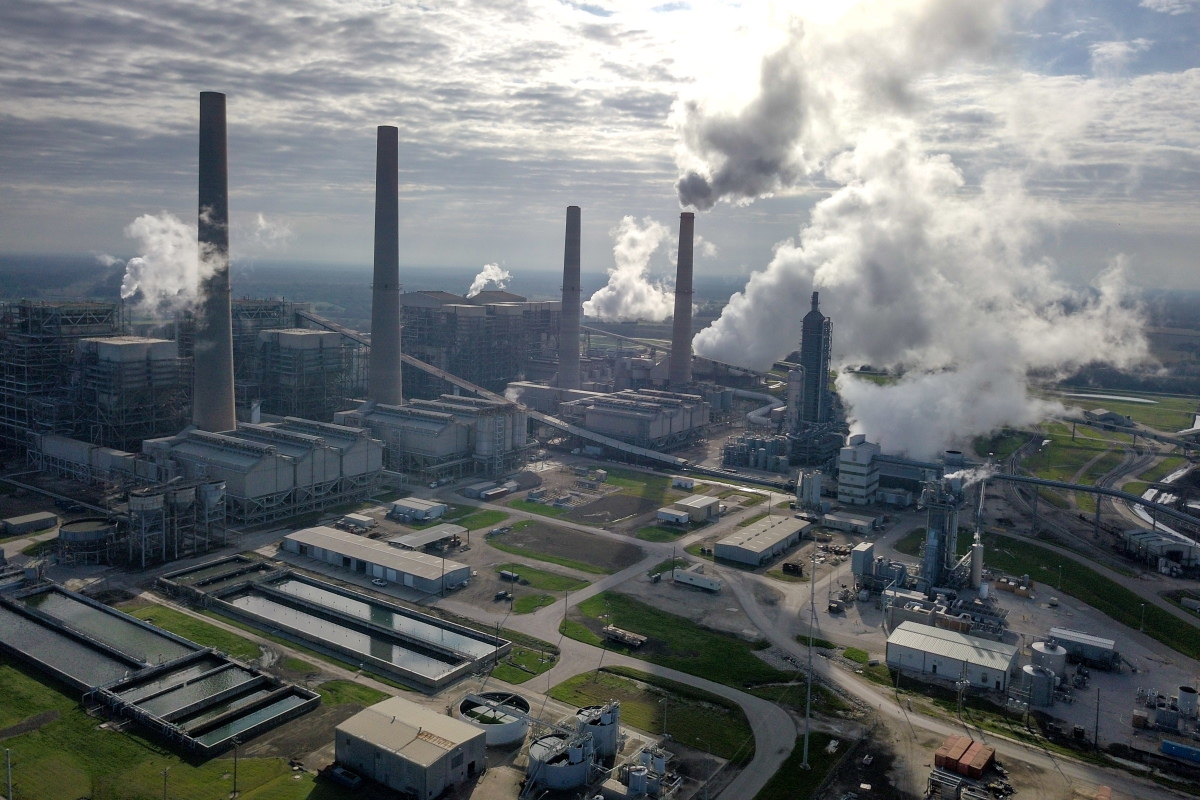 The WA Parish Generating Station in Fort Bend County, which generates electricity from coal and natural gas, is the largest power station in Texas and fourth largest in the United States. It was one of the facilities that failed during winter storm Uri. RM VM, CC BY-SA 4.0, via Wikipedia

It took almost no time for top Texas Republicans to inject climate politics into the state’s catastrophic February blackouts with their efforts to heap false blame for that crisis on renewable power.

This week, however, news of a suddenly arising risk of more blackouts left no opportunity for fossil-energy fans to stage a plausible re-run of the anti-renewables claims they deployed during and after the state’s big freeze.

With energy demand reaching record levels and temperatures soaring, the state’s principal grid operator, ERCOT, announced Monday that an uncommonly and perplexingly large number of power plants had gone offline within a short period. Collectively, the shutdowns amounted to a loss of about 15% of grid’s total capacity and more than triple the outages that the agency had forecast.

Nearly 80% of the offline plants produce electricity from “thermal sources” the agency said, calling on Texans to conserve electricity. Thermal generation in Texas means natural gas (45% of the ERCOT grid’s electricity in 2020), coal (18%) and nuclear (11%).

Coming just four months after the February grid crisis, the episode could further erode the credibility of longstanding arguments by fossil-fuel companies and their political supporters that fossil-energy plants are more reliable sources of electricity than wind and solar generation. On Thursday night, CBS late night host Stephen Colbert made fun of the latest problems for the ERCOT grid, which serves 90 percent of Texas: “And just to rub salt in the wound, these warnings about unreliable power are coming from ERCOT, which stands for the Electric Reliability Council of Texas. Kind of a misnomer. At this point, that’s like the Sobriety Council of New Orleans.” 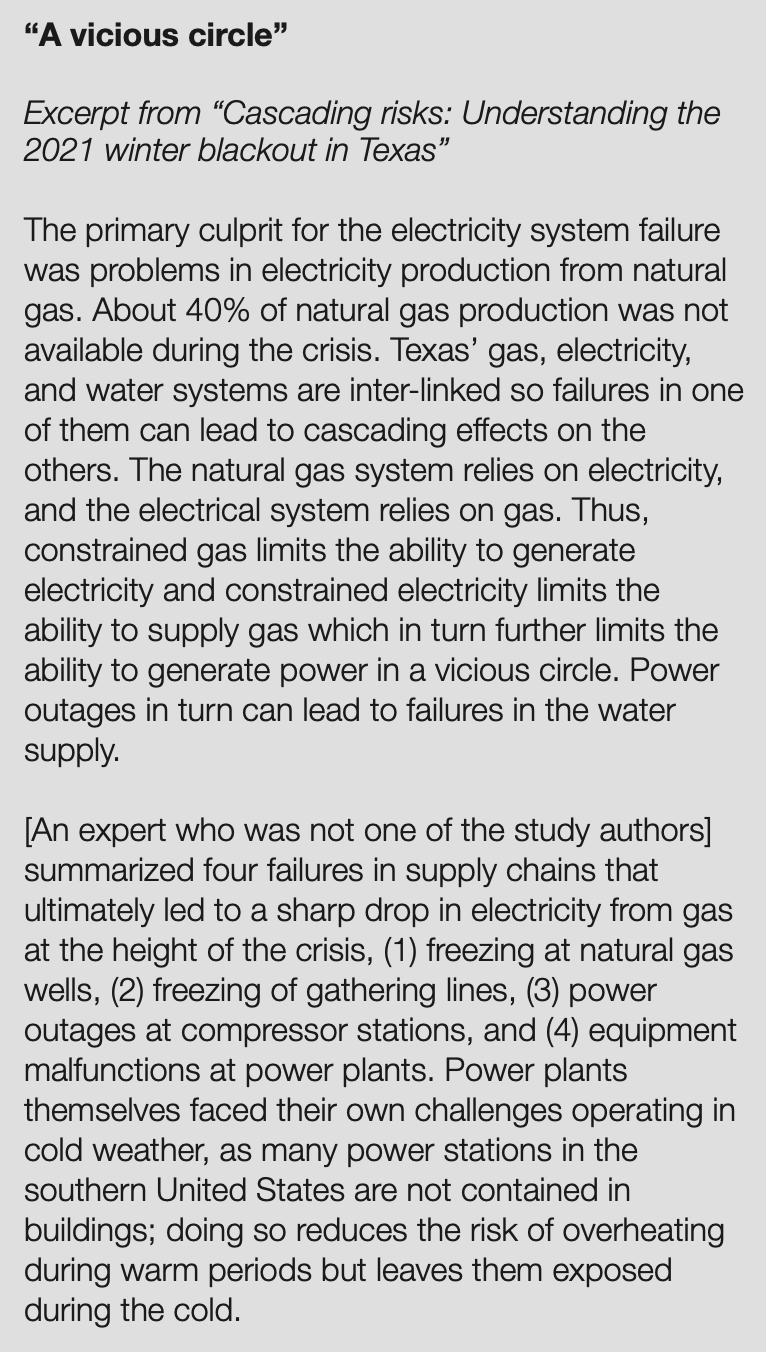 Now, in a study published earlier this month, a team of energy authorities including four at the University of Texas affirms those early assessments by Cohan and others, declaring that problems with natural gas systems, not renewables, were indeed the “primary culprit” in the February crisis.

The new study, “Cascading risks: Understanding the 2021 winter blackout in Texas,” reports that all major fuel sources except solar failed to meet ERCOT’s expectations during the February freeze, but natural gas was “responsible for nearly two-thirds of the total (electricity) deficit.”

Along with a detailed analysis of the domino-like infrastructure failures that drove the Texas grid’s cold-weather crisis, the authors warn that their findings generally raise “especially important questions in the midst of a worsening climate crisis and the need to pursue a clean energy transition.”

The energy challenges facing Texas are more salient given the threat of climate change and the emergent energy transition. Though scientists are uncertain whether climate change made the (February) freeze more likely by displacing the polar vortex southward, climate change has implications for Texas. Texas is especially vulnerable as it endures freezes, heat waves, droughts, floods, and windstorms. Therefore it is in Texas’ interest to prepare for a wide range of possible scenarios, including weather with hotter and colder temperatures, wetter and drier conditions, and intense winds.

A mandate to heed “weather predictions” in resilience rules

After intense debate and lobbying, the Texas Legislature recently addressed the February blackouts by passing Senate Bill 3, which Abbott signed into law last week. Among other measures, the statute will require power plants and “critical” natural gas facilities to be retrofitted (“weatherized”) to better withstand extreme weather conditions.

“Our team didn’t make climate change projections but noted that climate change is happening,” he said. “We know temperatures in Texas are getting hotter and also subject to other weather extremes made worse by climate change like superstorm events.

“If Texas merely reacted to the winter storm of 2021 by weatherizing its electricity system to prepare for cold weather, that would leave it vulnerable to other climate-related events like the heat in recent days that is again testing the grid. Texas has to plan for the weather in the 2060s not the 1960s, and right now we’ve barely made efforts to climate-proof our infrastructure.”

The Legislature, with both houses controlled by Republicans, has refused for years to address manmade climate change directly, by name, and that pattern of inaction held true in this year’s biennial session.

Senate Bill 3, however, did instruct the Public Utility Commission to devise weatherization requirements (though without ordering compliance deadlines) for electric generation, transmission and distribution facilities. The PUC, the law says, should consult with the state climatologist’s office at Texas A&M University about its “weather predictions” in developing these rules.

But that mandate left a big question unaddressed: Among weather and climate experts, “weather predictions” strongly suggests an outlook for near-term conditions – say, over the next few days or weeks. “Climate predictions (or projections),” by contrast, connotes an outlook for longer-term conditions, which scientists in a broad international consensus say are unfolding now as fossil-fuel pollution warms the planet’s atmosphere.

Is the Republican-led Legislature’s “weather predictions” directive to the PUC, despite that term’s usual short-term implications, a tacit acknowledgment that lawmakers think longer-term climate change is happening? That, particularly the man-made character of climate change, is a scientific conclusion that many leading Texas Republicans have refused to admit.

An exchange between two lawmakers before the final House vote on Senate Bill 3 indicates that reluctance is still very evident.

Replying to a question by Democratic Rep. Ron Reynolds of Missouri City, Republican Rep. Chris Paddie of Marshall, a leader in the Legislature’s attention to grid issues, conceded only that Texas is experiencing “unusual weather patterns” but wouldn’t say they’re human-caused.

Reynolds: “One of the critical things that I think was missed is that we did not look at whether or not climate change had an impact upon the extreme weather that we’ve experienced. We’ve experienced several 100-year events within the last several years. Would you agree we also need to look at climate change as well?”

Paddie: “We may disagree on what the causes are, but I think it’s difficult to argue we’re seeing some unusual weather patterns. We’re seeing some of  these things with more frequency, so it’s kind of hard to deny we obviously have to operate during those type of situations. As far as the reasons for that, it’s always a point of discussion.”

John Nielsen-Gammon, the state climatologist and regents professor of atmospheric sciences at A&M, told Texas Climate News this week that he hadn’t been told yet what the PUC’s request for his “weather predictions” will entail.

“Now that the bill is signed, I plan to check with the agencies to see how I can be most useful.”

The PUC should expect no equivocation in his reports. In numerous public statements dating back years, Nielsen-Gammon has forthrightly endorsed the international scientific consensus that says climate change is mainly manmade and warned of the extreme weather risks, driven by that trend, that Texas is facing. Senate Bill 3 gave the PUC six months to develop the new weatherization rules.

Meanwhile, Texas isn’t alone in paying close attention to heat and grid conditions this week. Amid a heat wave across much of the Western U.S. that is unusually severe for this early in the summer and toppling high temperature records in various locations, California officials called for voluntary power conservation by that state’s residents to help avoid blackouts.

John Nielsen-Gammon is a member of TCN’s Advisory Board. The volunteer members have no authority over our editorial decisions.