Texas shrimpers and many others around the world use the fishing method. One study’s lowest projection showed trawling can release as much carbon into the water as Canada, the 11th biggest climate polluter, emits to the air. 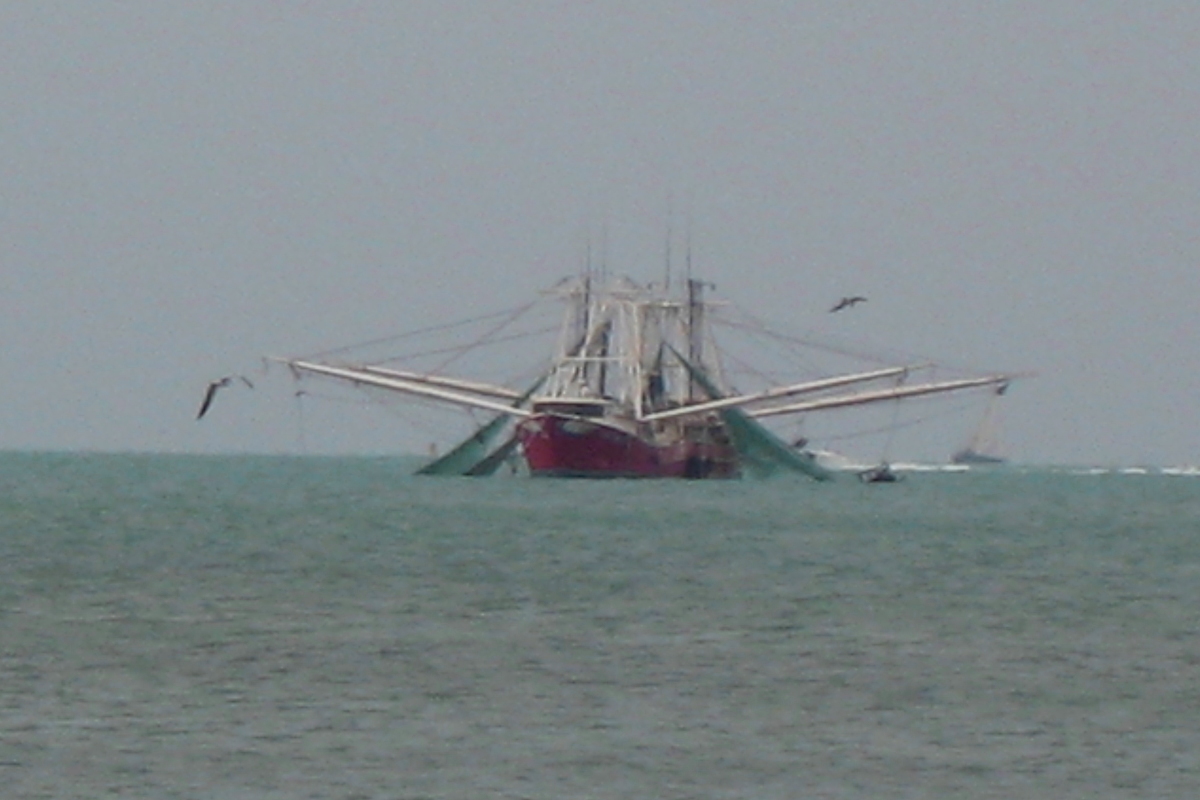 Trawling off the Florida Keys. jpoet, CC BY-NC-ND 2.0, via flickr

Marine sediments represent a large and globally important carbon sink – an environmental feature that absorbs carbon dioxide from the atmosphere and helps mitigate manmade warming, according to recent research.

The paper, recently published in the journal Frontiers in Marine Science, estimates that the ocean contains the largest pool of sediment or soil carbon stocks in the world, storing 1.75 times more carbon than the top 1 meter of terrestrial soils.

Related research reported in Nature warns, however, that these sediments are at risk of disturbance by bottom trawling, a fishing method that involves towing a net along the ocean floor to capture target species such as crabs or shrimp. According to that paper, trawlers scrape some 1.9 million square miles of the sea floor each year.

The high-end estimate also is equivalent to 15 to 20% of the atmospheric carbon dioxide absorbed by the ocean each year and comparable to estimated amounts of carbon lost from terrestrial soils due to farming. (Texas Climate News recently reported on the importance of protecting carbon stored in soil.)

Organic carbon can remain stored in marine sediments for millennia, but disturbing sediment can re-mineralize carbon into carbon dioxide, which is likely to increase ocean acidification, reduce the ocean’s ability to avoid acidity changes and, potentially, add to atmospheric carbon dioxide.

Juan Mayorga, a marine scientist with the National Geographic Society and University of California Santa Barbara and a co-author on the Nature paper, emphasizes that researchers are working to determine how much of the carbon released into ocean waters by trawling might eventually make it into the atmosphere. Even if most of it remains in the water, it still creates problems.

“Pumping carbon dioxide into the ocean alters the chemistry of the water,” Mayorga said. “It reduces the ocean’s ability to continue to uptake carbon from the atmosphere, which is one of our biggest allies in terms of reducing atmospheric concentration of carbon.”

Protecting just an additional 3.6% of the ocean would eliminate 90% of the risk of carbon disturbance due to bottom trawling, according to the Nature paper, if protection targets areas where both carbon stocks and potential for disturbance are highest.

Such areas include China’s Exclusive Economic Zone (EEZ), Europe’s Atlantic coastal areas, and areas where currents bring critical nutrients up from deeper water. Scientists also have identified continental shelves as hotspots for carbon storage, including areas in the Gulf of Mexico.

“These shelf zones have lots of carbon coming in from rivers along with sediments that can quickly bury it, both important components in marine carbon cycling,” Atwood said. A significant amount of trawling occurs on continental shelves.

A wealth of information exists on the potential effects trawling has on bottom habitat, including sediment resuspension, but studies to date have not looked at carbon storage. Most trawling in the Gulf is for shrimp, which a study in Galveston Bay showed disturbs the upper 50 millimeters (2 inches) or so of sediment. 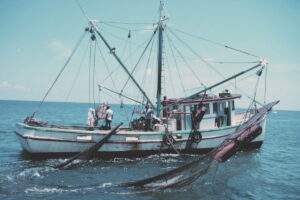 The Texas shrimp harvest contributes, on average, approximately $265 million to the economy annually. Over the years, Texas Sea Grant has worked with the fleet to reduce bycatch (unintended species that are netted) and improve catch retention and fuel efficiency – work that tends to also reduce disturbance of bottom sediment.

Texas currently has about 300 inshore and 550 offshore licensed shrimp trawlers. Those numbers have been dwindling for years, she added, primarily due to competition from foreign imports.

“It’s a challenge for the industry to operate under current standards while competing with imported products that don’t face the same requirements,” Picariello said. “It is economically a tough business, and our guys are struggling just to survive.”

The researchers studying sediments’ importance sympathize. “We’re not out to attack the trawling industry,” Atwood stressed, “but to highlight that the fishing industry and scientists need to work together to develop practical solutions.”

Such solutions can come in part from gear modification. While heretofore aimed at reducing bycatch such as sea turtles, modifications also could minimize sediment disturbance and its effect on carbon.

“It actually is in best interest of trawlers to keep their nets off the ground,” Atwood said. “It costs a lot of gas to pull all those sediments. Gear changes would certainly help. Creating more [marine protected areas] would help. If we have to trawl and haven’t changed the gear, perhaps we just don’t trawl these areas with high sediment carbon storage.”

Management actions also need to ensure that trawling doesn’t simply move to waters adjacent to a protected area, Mayorga said. “If it keeps happening next door, you get a net effect of zero.”

“We need to add the trawling aspect and carbon component to the list of things that managers and fishers need to look at,” says Atwood. “We need to do a cost-benefit analysis. Is income from the trawling industry worth these detrimental impacts? We also have to look at other components such as jobs and food security, and how to offset their loss.”

Along Brazil’s coastline alone, for example, fisheries are essential to the food security of more than a million people.

Marine protected areas often bring tourism-related economic benefits, which could help compensate communities for the economic loss of shutting down a fishery.

Atwood noted that carbon markets could provide credits to compensate fishers. Such credits for protecting mangroves and seagrasses already exist.

Together, the two papers set out a framework for achieving biodiversity protection, food provisioning and carbon storage. Any one of those benefits could be worth the effort.