Texas regulators have consistently allowed the controversial practice at oil and gas wells, which contributes to manmade climate change. Voters in November rejected a Democratic candidate who called for tougher state regulation. 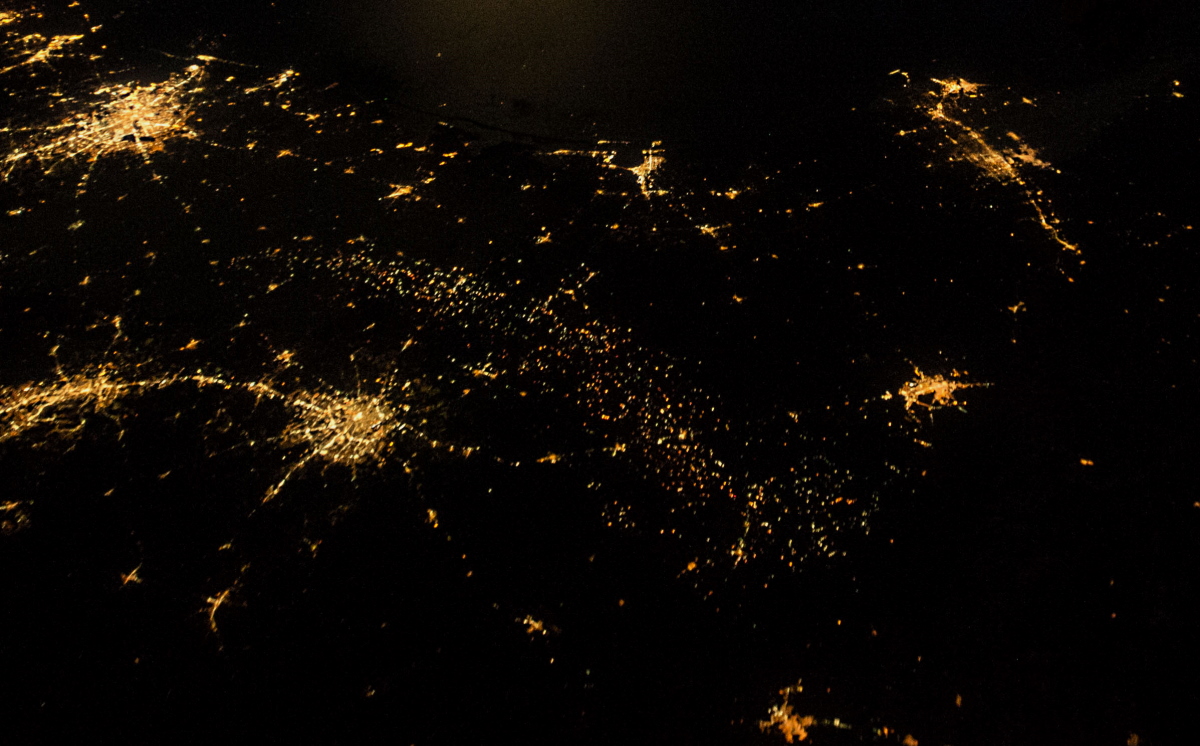 Natural gas flaring in Texas is visible from space, as this 2015 photo illustrates. Looking toward the southeast from the International Space Station, an arc of natural gas flares in the Eagle Ford Shale region of South Texas can be seen running up and left from the lower center towards a point midway between San Antonio and Houston.

Federal regulators under the incoming Biden administration are expected to reinstate methane regulations for the oil and gas industry. But state regulators in Texas – after making minimal changes to their own policy last year – are poised to continue to let companies burn gas. In the end, it could be pressure from international customers that makes Texas officials change their laissez-faire attitude toward greenhouse-gas regulation.

About 30 percent of methane released into the atmosphere is from oil, gas and coal extraction. While methane has a short atmospheric life, it traps heat 28 times more effectively than carbon dioxide over a 100-year period, making it the second biggest contributor to climate change.

President-elect Joe Biden, once inaugurated, plans to take immediate steps to curb methane emissions by setting aggressive limits at new and existing sources, according to his climate plan. Emissions of methane from oil and gas activities come from leaks in pipelines, compressors and processing plants, as well as releases from completed wells.

To curb those emissions, the Environmental Protection Agency under Biden will probably reinstate methane leakage rules that were initially rolled out under former President Barack Obama under the Clean Air Act but rescinded by the Trump administration along with other environmental regulations.

“I would definitely expect the EPA to re-promulgate the methane leakage rule, and also the fracking rules on public land, or ban it on public land,” David Spence, the Baker Botts Chair in Law at the University of Texas at Austin, said. Fracking is a controversial drilling method.

Under the Obama-era rules, companies would have to monitor and limit emissions from operations and put in place methane control requirements for the production and processing of oil and natural gas as well as curbs on emissions from transmission and storage.

In April, the Trump administration rolled those rules back. Instead, methane would be addressed indirectly by a 2012 rule aimed at volatile organic compounds with the co-benefit of reducing methane leakage.

“We’re certainly hopeful that they’ll restore the methane regulations from the previous Obama administration, but also strengthen those regulations,” Colin Leyden, director of Regulatory and Legislative Affairs for the Environmental Defense Fund, said.

The first round of methane regulations from the Obama administration was for new sources, but new rules will probably extend that to existing sources, Leyden said. The Biden campaign made climate a primary issue.

Federal action on methane won’t affect the contentious practice of flaring in Texas. Flaring, which refers to the controlled burn of natural gas during the oil and gas production process, is regulated by the Texas Railroad Commission.

That agency’s regulations limit flaring, but those rules are regularly waived, Spence said.

“The rules on the book would require more of this stuff to be captured,” Spence said. “Problem is, to build a gathering line, the only entity that can force them to do that is the Railroad Commission.”

Since 2013, operators have obtained 35,000 flaring permits without a single denial, according to the Environmental Defense Fund.

Then the commission made adjustments on how long that initial permit to flare is. In most circumstances it has gone from 180 days to 90 days.

“I will say most flaring occurs in the early months of a well’s life,” Leyden said. “The operator can also still go to the commission for a hearing with staff to get a long-term permit to flare as well.”

Since last June, EDF conducted four flare surveys in that region’s oil-and-gas-rich Permian Basin and consistently found that 5 percent of all flares were completely unlit, venting methane directly into the atmosphere, Leyden said. Roughly, only partial burning was occurring at an additional 5 to 6 percent of flares, so some portion of that methane was also escaping.

It remains to be seen whether the Railroad Commission will do anything else on flaring. The commissioner that seemed most interested in the subject, Republican Ryan Sitton, lost his bid for reelection last year. Republican Jim Wright defeated Sitton in the party primary and then beat Democrat Chrysta Castañeda in November. In a race watched nationally for its significance in the fight against climate change, Castañeda had called for a crackdown on flaring and venting of methane while Wright praised the oil industry.

There’s a big split within the industry in Texas on the methane issue between the major oil companies and small independent companies, Jacqueline Weaver, professor emerita at the University of Houston Law Center, said. Weaver’s work focuses on oil and gas law and energy policy as well as environmental and natural resources law.

“The Obama rules, for the most part, were quite reasonable,” Weaver said. “The majors have gone and done a lot of the work. The little guys say, ‘Oh my gosh, you’re going to put us out of business.'”

The largest energy companies, referred to as the super majors, see the writing on the wall when it comes to both methane leakage and flaring, Spence said.

“The independents have fewer resources,” he said. “They are often more leveraged, so every penny counts for them, and they don’t really have that larger strategic sense either.”

In Texas, these smaller, independent companies are often seen as having lots of influence over state regulators. The railroad commissioners are going to be most responsive to the people who help them get into office and stay in office, Spence said.

“Exxon, even though they employ a lot of people, probably doesn’t employ more people than all the independents do, collectively,” Spence said. “That’s kind of the way you have to think about it.”

On the other hand, the split over methane releases and flaring between Exxon, the main super major in Texas, and the small companies may not be as wide as publicly perceived.

Historically, Weaver said, only when the federal government steps in, under the Clean Air Act or Clean Water Act, and can “overpower the state agencies,” does the Texas Railroad Commission step up regulation. As an example, she pointed to the “No Pit Rule,” which prohibited oil companies from storing oil and gas waste improperly.

“Without that federal push, Texas wouldn’t move,” Weaver said. “Once the federal government comes in, then it makes it easy. They can say, ‘Guys, sorry, the feds are making me do this.'”

Meanwhile, regulators in other energy producing states, such as Colorado and New Mexico, are taking a tougher stance on flaring, Leyden said.

But Colorado differs from Texas in a significant way because the economics of the oil and gas industry’s activity in Texas is driven by oil, James Coleman, energy law professor at Southern Methodist University’s Dedman School of Law, said.

Colorado and other states like Oklahoma and Wyoming have different regulatory schemes, but those states’ wells are primarily natural gas wells.

“You would never invest in a well unless you have plans to take the gas away,” Coleman said. “The problem is in places like Texas, New Mexico and North Dakota, where you’re investing in a well on the basis of oil. You don’t have to have a plan to sell the gas to make it work.”

“There is a lot of leaking in other states, but they are dwarfed by what’s going on in Texas, New Mexico and North Dakota,” Coleman said.

The challenge will be to get rid of the economic incentive to dispose of gas through flaring, he said.

“They have a very strong proposal that in essence bans routine flaring,” Leyden said. “And as a backup, it requires by 2026 a 98 percent capture rule for operators. We think there’s a few things to tighten up on that proposed rule, but overall it’s a very serious attempt to end routine flaring.”

There is hope that operators are beginning to see that they need to be operating in a zero routine-flaring world – not only for themselves, to attract investment dollars, but also within a regulatory framework that promotes that, Leyden said.

In November, Engie SA, a French utility partially owned by the French government, backed out of contract negotiations with NextDecade Corp. to import liquified natural gas (LNG) from its Brownsville facility in South Texas.

The French government encouraged Engie to abandon the contract over concerns about methane emissions from fracked wells in the Permian Basin, Leyden said.

“I don’t think one contract from France is necessarily going to be what moves the [Railroad] Commission or industry, but I do think it’s indicative of a larger trend,” he said. “Europe is the largest importer of natural gas in the world, and they are contemplating methane standards as part of any gas that ends up being purchased in the European Union.”

It’s only a matter of time before countries outside Europe, like Japan or South Korea, also take into account environmental considerations.

“These are all vitally important LNG partners for Texas,” Leyden said. “Texas may not care about climate and the impacts of the environmental footprint of gas and oil and gas produced here, but other countries will, and other people will be holding those countries accountable for the decisions they make in regards to their choice of energy sources.”

Nushin Huq is a contributing editor of Texas Climate News. She is a Houston-based independent journalist focused on covering energy and the environment.