Climate-action appeals figured in several key races but failed to give Democrats the edge they needed to prevail over their Republican rivals. Analysis continues over what exactly went wrong. 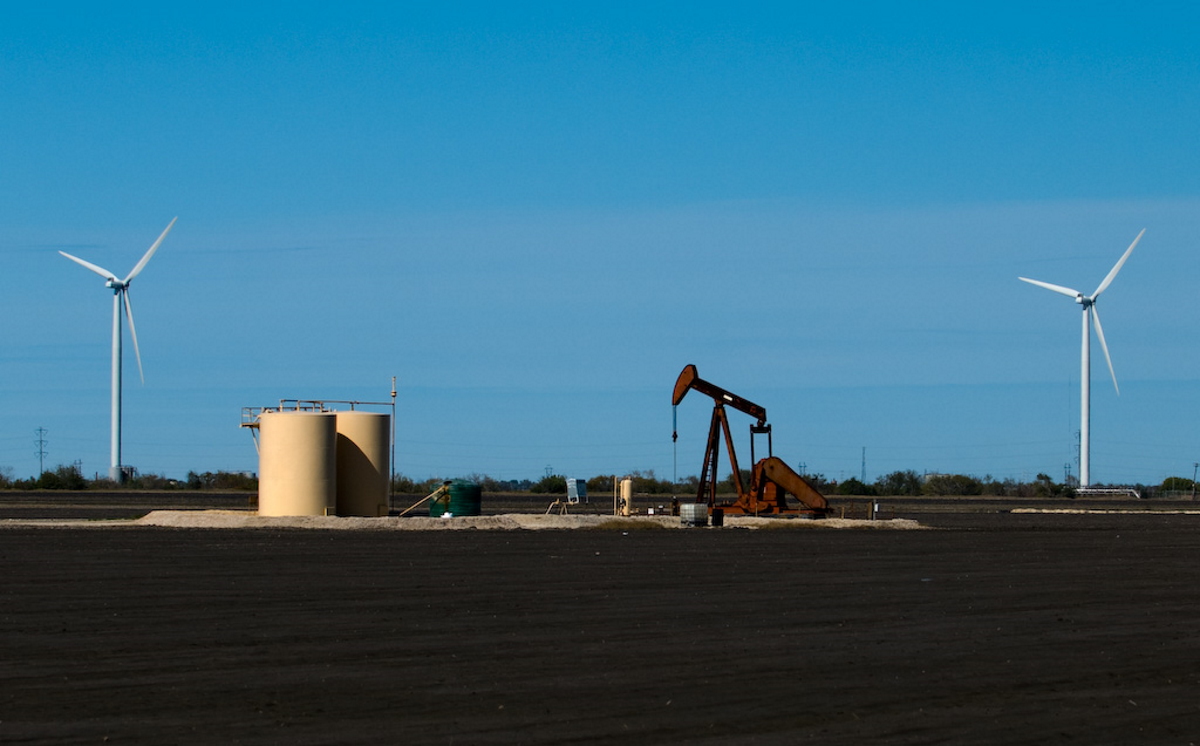 Two windmills and an oil well near Corpus Christi

They didn’t rank with the pandemic, the economy and healthcare as the most prominent election issues in Texas this year, but climate and clean energy arguably played a bigger role than ever before.

It’s not arguable that advocates of climate action and clean energy came up shorter than they’d hoped on Nov. 3. Much shorter.

Given the continuing partisan breakdown on climate action revealed by polls – most Democrats and independents in favor, to differing degrees, with most Republicans not as supportive, if at all – advocates’ hopes were pinned to Democratic candidates’ success in Texas.

Those hopes seemed reasonable. In what was called a blue wave, Democrats had closed the party gap in the state House of Representatives in 2018 by flipping 12 seats. They appeared poised to narrow it further this year or even seize control of the chamber. Beto O’Rourke came closer to beating Ted Cruz in the U.S. Senate race in 2018 than a Democrat had come in many years. This year, polls showed a surprisingly tight Texas race between Joe Biden and Donald Trump.

The election outcome, however, revealed that Texas is still a largely Republican-leaning state, despite Democrats’ control of major cities and counties and their strides in recent years. Trump defeated Biden in Texas by 6 percentage points – not as close as some polls forecast but closer than his 9-point win over Hillary Clinton in 2016 and Mitt Romney’s 16-point defeat of Barack Obama in 2012.

The overall Republican tilt of Texas election results this year was manifested in various ways pertinent to climate and energy issues.

Democrats held 67 seats in the state House to Republicans’ 83 in the 2019 session and thought they might win control by flipping nine seats this year. But the effort, fueled in part by large infusions of campaign cash from outside the state, failed. Republicans will start the 2021 session with the same 83-67 majority they had two years ago.

The one Democrat on O’Rourke’s list who prevailed was Ann Johnson, who defeated five-term incumbent Sarah Davis in an affluent, largely Democratic Houston district. Johnson, who won by 4.6 points, criticized Davis’ votes on climate issues but focused most campaign advertising on healthcare. Davis has been considered the most moderate Republican in the Texas House.

Some Democratic House candidates not on O’Rourke’s recommended list also talked about climate. In one Houston-area race Travis Boldt waged a campaign explicitly stemming from his disappointment with the Republican incumbent’s public refusal to endorse the findings of climate science.

The outcome was a considerable improvement for Democrats compared to recent races, however. Boldt lost to Republican Rep. Ed Thompson by 6 points in District 29, which includes Pearland and surrounding suburban areas. Thompson had run unopposed in 2018 after winning reelection in 2016 by 22 points.

The race for an open seat on the state Railroad Commission, which regulates oil and gas production, was the first statewide election in Texas history to involve prominent debate related to climate change. It involved the agency’s controversially permissive stance with regard to flaring of waste gas, which contains methane, a potent atmosphere-warming pollutant.

Democratic nominee Chrysta Castañeda, an engineer and oil and gas attorney, campaigned with a call to reduce wells’ flaring and other methane releases, except for safety reasons, because of their environmental and public-health impacts. Republican James Wright, a little-known business owner in oilfield services and waste management who surprisingly beat Republican incumbent Ryan Sitton in the party’s primary, said he wanted to continue the commission’s policies.

The race attracted national attention, given the climate ramifications of methane releases from the extensive oil and gas production in West Texas. One example: Climate-action proponent Mike Bloomberg, the billionaire businessman who briefly ran for the Democratic presidential nomination, donated $2.6 million through late October to help secure a Democratic victory.

Democrats outspent Republicans in their Railroad Commission campaigns by a more than 3-to-1 margin, but Wright won handily, defeating Castañeda by 10 points.

Another statewide race in which climate was discussed, though not as prominently as in the Railroad Commission contest, was between incumbent Republican Sen. John Cornyn and Democrat MJ Hegar.

Cornyn, unlike some of his fellow Texas Republicans who deny climate science, has acknowledged manmade climate change is a problem and supported technology development to address it. Hegar said climate change was an important reason she ran for the office and called for “aggressive” expansion of renewable energy.

Cornyn won by about the same comfortable 10-point margin that Wright scored in the Railroad Commission race.

Races for the state’s 36 House seats resulted in the same division in the Texas delegation that existed before – 23 seats in Republican hands and 13 held by Democrats.

In a couple of House districts where climate has been a continuing topic of political debate in recent years, the election ended with the reelection of Republican incumbents by wider margins than they posted in 2018.

In District 21, which includes much of the Hill Country along with parts of San Antonio and Austin, Chip Roy won a second term. Roy, who has ridiculed climate-change concerns as “hysteria,” beat Wendy Davis, a former Democratic nominee for governor by 7 points. Davis said climate change is an existential threat. In 2018 Roy defeated Democrat Joseph Kopser, who had also called for strong climate action, by only 2 points.

In the 10th District, which stretches 200 miles from Austin to Houston’s western suburbs, Democrat Mike Siegel challenged eight-term incumbent Republican Michael McCaul for the second time. Siegel was an outspoken proponent of the Green New Deal, a sweeping blueprint for climate action and new clean energy jobs. McCaul, who has received very low ratings from the League of Conservation Voters, joined Republicans nationwide in saying the Green New Deal would be economical harmful. The incumbent won by 7 points, up from his 4-point victory margin over Siegel two years ago.

There have been numerous reports, especially about Hispanics in the Rio Grande Valley, that some Texas voters who normally favor Democrats voted for Trump and perhaps other Republicans out of concern that Biden’s climate and clean energy proposals would hurt the state’s oil and gas industry.

However large a factor that may prove to have been in specific regions or across the state, early analyses more prominently identified other reasons for the general profile of the Texas vote. Last week, for example, Pew’s Stateline news service examined why Democrats failed to take over the Legislature’s lower chamber:

More than two weeks after the election, Texas Democrats are still assessing what went wrong in their bid to win the nine seats they needed to seize the state House for the first time in nearly two decades. But a variety of factors seemed to contribute to their losses, according to postmortems by analysts and political leaders.

Among them: Democrats overestimated how much new minority voters, young voters and out-of-state transplants would expand their base, and underestimated Trump’s ability to drive Republicans to the polls. They also failed to respond adequately to the conservative backlash against anti-racism protests and calls to cut police budgets. And they were hamstrung by their decision to curb in-person campaigning and door-knocking in response to the pandemic, while Republicans visited voters in person.