Environmental justice groups rely heavily on direct contact with government and with people affected by pollution and climate change. Covid-19 hasn’t made their work any easier, but they adapt and carry on. 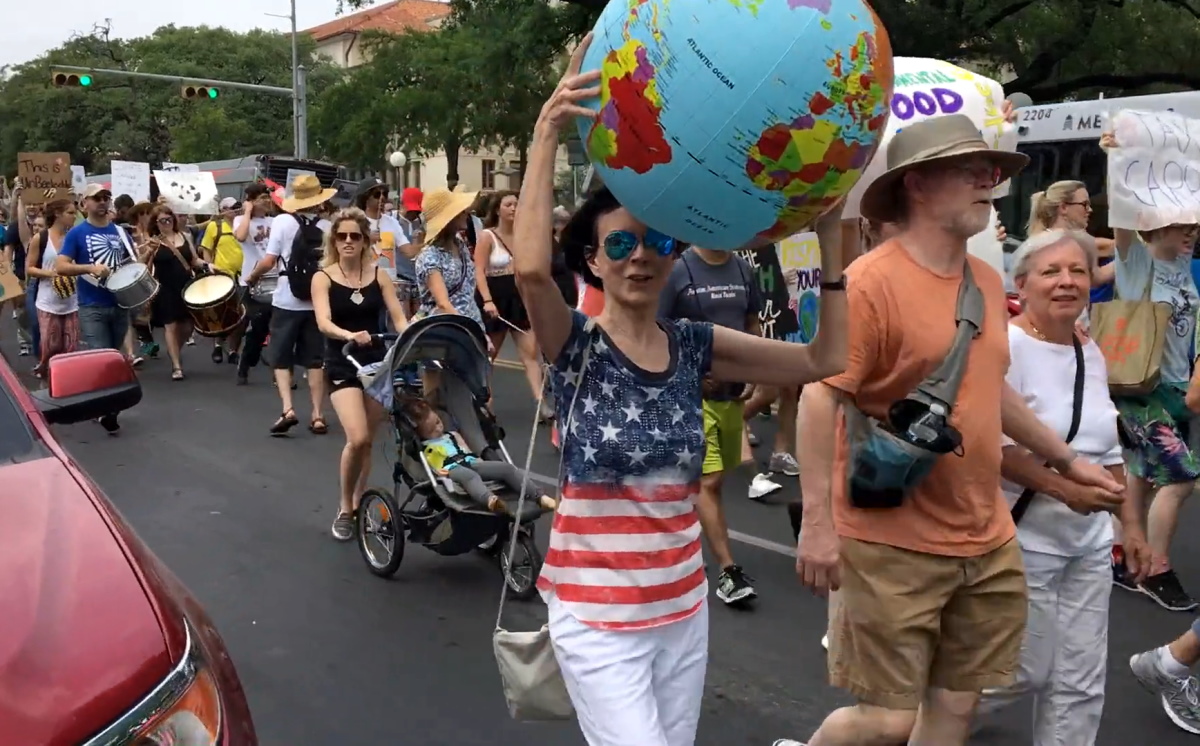 The Covid-19 pandemic has put a stop for the time being to activist tactics like the Austin Climate March, shown here, when thousands rallied to call for action against climate change in April 2017.

Juan and Anna Parras, the husband and wife team behind Texas Environmental Justice Advocacy Services, or TEJAS, have been giving “toxic tours” in and around Houston’s Ship Channel for more than 20 years. Low-income neighborhoods and communities of color sit downwind from refineries and chemical plants, making them case studies in environmental justice circles.

But in the past two months, with the arrival and spread of Covid-19, the Parrases have had to cancel nearly all their tours, including a partnership with the Institute for Journalism and Natural Resources, which was supposed to convene more than a dozen journalists from all over the country; private tours with foundations and local businesses; and school trips.

“The tours can be anywhere from two to 55 people on a bus,” Juan Parras says. But in the middle of the global coronavirus pandemic, gathering in an enclosed space like a bus is a threat to public health. too.

Even more disappointing for the environmental justice organization was the cancellation of the National Planning Conference in Houston at the end of April. TEJAS had been selected to provide city planners and engineers with an overview of the communities in Houston that have been shaped by decades of environmental injustice.

“It was the first time we’ve been approached for something like this,” Anna Parras says. TEJAS is often the only environmental justice organization present at citywide meetings, and this would have been a rare opportunity to bring awareness to environmental justice issues at the national level. “We’ve been doing this work for a long time, so it’s unfortunate, and we’re hoping it will be rescheduled.”

But while public-facing events have been canceled, the work still goes on for TEJAS and other environmental organizations around the state. Universities are hosting climate policy and education talks online, featuring prominent speakers like Texas Tech’s Katherine Hayhoe, a climate scientist and famed climate communicator, on Zoom calls.

And just a few weeks after the pandemic shut down social gatherings, the Sunrise Movement, a grassroots organization of young climate activists and organizers around the United States, moved its Earth Day strikes online. The strikes urge young people to leave school and work and join in calling for politicians to endorse the Green New Deal, a sweeping set of climate policies that would transform the economy and transition it away from fossil fuels.

Matthew Kim, a high school student in Austin, had been working on the Sunrise Movement’s Earth Day strikes for about a month when he got an email from the Texas Capitol’s events staff notifying him that all events and demonstrations were canceled for the time being.

“We had started planning in February and early March,” he tells Texas Climate News. The organization was trying to learn from its mistakes in September,when its previous climate action strike drew smaller than expected crowds. Kim and other Austin-area organizers had just a few weeks to shift all their programming online.

“Planning online can be a blessing and a curse,” Kim says. “We really rely on that feeling of, ‘You’re saving the world.’ It’s hard to maintain the momentum when you’re not seeing people, and you don’t feel like you’re doing much.” On top of that, high schoolers are adjusting to taking classes online at home, adding stress to their daily lives, he says.

Lia Millar, an organizer with the Texas Gulf Coast Labor Federation, assists Houston-area students with digital communications for local Sunrise events. “Digital organizing is usually about supporting field organizing,” she says –for example taking photos and videos during the event to promote the message on social media.

But moving a strike online proved difficult when everyone was working from home. Climate strikes can bring people of all walks of life together to demonstrate a common goal, Millar says. But with the loss of a physical space at which to gather during the work day, the strikes, though well attended globally, may not have been as effective as intended. People were tuning in from their computers at home, while probably working online if they had the capacity, she says.

On top of that, Sunrise chapters in Texas are often working in communities that don’t have a strong tradition of striking, and building that support online is far more challenging. During the September strikes, Millar says, a significant percentage of strikers took a lunch break from work to join in.

“Nothing can really replace occupying space,” she says. But that hasn’t stopped Sunrise from trying to keep up the momentum virtually. In the past few months, the national organization launched Sunrise School, a crash course in the Green New Deal and organizing around it. The classes are spread out over a few days, with as many as 70 people attending at once.

For organizations like the environmental advocacy group Air Alliance Houston part of the struggle has been making sure the community members the organization works with can stay in the loop – some may not have access to computers, making virtual engagement more difficult. And not everyone has the capacity to engage with environmental issues while their entire world is changing rapidly, says Bakeyah Nelson, the organization’s executive director.

Like other organizations in the environmental space Air Alliance has shifted its community meetings online. But it is considering another strategy as well: asking for permit-application delays when a proposed project that would emit air pollution requires community input, so that the mandatory public-comment period can be honored at a later date when public meetings are safe again.

“The strategy is going to be on a case-by-case basis,” Nelson says. “Things are still moving at the city government level, and there are a lot of aspects we are involved in that are still moving.”

In late April Air Alliance called on community members to tune in to the Texas Department of Transportation’s virtual meeting on I-45 expansion, for example, and provide comments online about the massive highway expansion project that could displace communities of color and bring more air pollution to those who remain.

Fenceline communities – typically lower-income neighborhoods, adjacent to pollution sources – already contend with longstanding environmental and other health disparities. Covid-19 has brought yet another, potentially synergistic, problem for people there. Last month, Harvard researchers released their preliminary finding of a 15 percent greater death rate from the coronavirus in areas with only slightly higher levels of fine-particle air pollution. The Centers for Disease Control and Prevention has said Covid-19 may be more severe in people with respiratory diseases like asthma, as well as illnesses including diabetes and hypertension, often more prevalent in lower-income populations. And communities historically forced into proximity with pollution sources also often live with other health-impairing circumstances such as a lack of green space and location in “food deserts” distant from stores selling healthful and affordable food.

“The federal government is relaxing emissions standards, and that is not helping our fenceline communities. It compounds the issues,” Anna Parras, from TEJAS, says. The staff at TEJAS has been closely watching the virtual hearings at the Texas Railroad Commission, which had been asked to vote on oil and gas production cuts. Instead, the commission relaxed some of its regulations around oil and gas storage, which could impact the quality of life for communities around the Houston Ship Channel.

Global pandemic or not, the fight for a cleaner, more just environment hasn’t let up for many Texas activists.

Amal Ahmed is a journalist covering climate change and environmental justice in Texas. Her work has appeared in Texas Monthly, Texas Observer, Popular Science, and City Lab among other publications.