The pandemic poses a dilemma for a global community of bureaucrats, U.N. agencies, development banks and others trying to step up action on climate change in a critical year for the 2015 Paris Agreement. 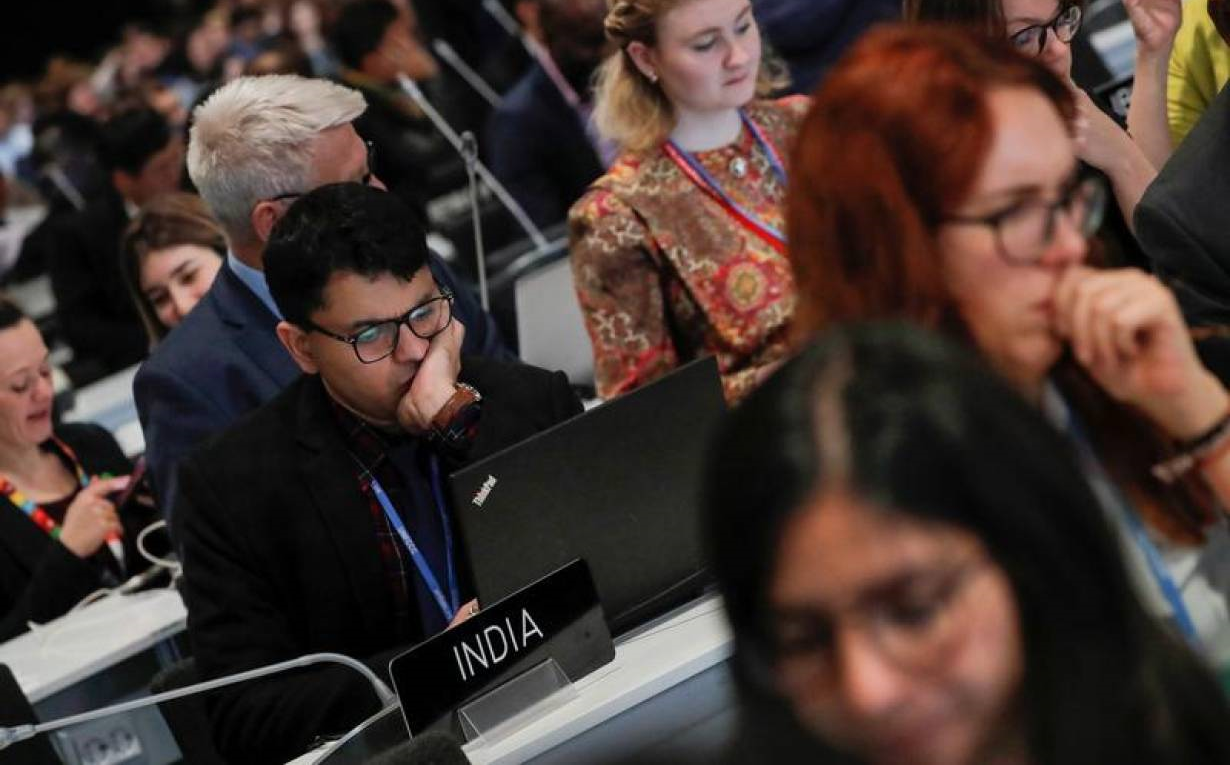 A member of India’s delegation studies his laptop during session of the U.N. Climate Change Conference in Madrid, Spain, in December.

BARCELONA – As the coronavirus began spreading quickly around the world, the Green Climate Fund, which backs developing-world projects to tackle climate change, relocated a board meeting this month from its headquarters in virus-hit South Korea to Switzerland.

But at the opening of the three-day gathering in Geneva, France’s delegate warned that holding the face-to-face meeting was too risky and “a mistake.”

The following week, three people who attended – two of the fund’s staff, based in Korea, and an official from Liberia’s Environmental Protection Agency – tested positive for the Covid-19 infection, though no other cases have since been detected.

The Green Climate Fund said it was “working closely with public health officials and the authorities” in Switzerland, Korea and other countries “to take necessary steps to limit the risks of exposure and transmission of Covid-19.”

It shut its headquarters in Iuncheon so the building could be disinfected, while its next board meeting, tentatively set for June, is “under constant review,” a spokeswoman said by email.

The incident highlights the dilemma facing a global community of bureaucrats, U.N. agencies, development banks and others trying to step up action on climate change in what analysts say is a critical year for the 2015 Paris Agreement.

The roughly 195 countries that adopted the Paris pact agreed to submit new or revised national climate action plans in 2020, with the expectation they would include more ambitious targets to cut planet-heating emissions faster and further this decade.

But the speed at which the coronavirus pandemic has forced the cancellation or postponement of in-person meetings around the world – including those organized by the U.N. climate secretariat (UNFCCC), until at least the end of April – has cast a dark shadow over collective efforts to tackle global warming.

Mohamed Adow, director of Power Shift Africa, a Nairobi-based climate and energy think-tank, said he believed it was still too early to decide on delaying the annual two-week U.N. climate summit due to be held in Scotland in November.

“That would mean action on climate change gets ignored this year, and poor people on the frontlines can’t afford that,” he told the Thomson Reuters Foundation.

“I would hate Covid-19 being used by (climate) laggards… as their get-out-of-jail free card.”

The UNFCCC, which runs global climate negotiations, may have no choice but to call off or slim down mid-year talks planned for early June in Bonn and considered key to advancing the agenda.

For now, nothing is settled. But in mid-March, U.N. climate chief Patricia Espinosa said the secretariat was “exploring the most advantageous and creative ways, through remote work and modern technology, to ensure our ongoing support to the intergovernmental process on climate change.”

A spokeswoman for the British government said it was continuing to work towards hosting the COP26 climate conference in Glasgow, still nearly eight months away.

But it was keeping the situation “under careful review” and was in frequent contact with the United Nations and other event partners, including Italy, now at the center of the pandemic.

“Covid-19 is clearly reducing the scope for in-person international meetings, which we will seek to manage as far as possible through other means such as video and phone conferences,” she added by email.

While running diplomacy and smaller meetings remotely may be an option, at least in the coming weeks, Adow said he saw “no chance” of doing the same for big international gatherings like the COP summits, which can attract as many as 30,000 delegates.

There was a need for officials, civil society advocates and others to be in the same place to shape and respond to the quick flow of decision-making, he noted.

As a climate and development expert from Kenya, he has pushed for agreements to meet the needs of poor and marginalized communities suffering the impacts of extreme weather and rising seas – something that could be sacrificed by unequal access to technology if negotiations go online, he warned.

Anna Schulz, who works on climate policy with least-developed countries for the London-based International Institute for Environment and Development, said holding conference calls across continents posed logistical challenges – from different time zones to poor internet access in some countries.

Some African government officials tasked with climate diplomacy cannot get online in their offices or the connection quality is not good enough to enable them to participate in a meeting that could last several days, she noted.

“So you’re looking at the possibility of having to fly delegates to a regional hub, like Kenya – but then that increases the potential for them to be exposed to the virus, and places an additional burden on the most vulnerable voices in the negotiations,” she said.

Such concerns were echoed at the recent Green Climate Fund session by diplomats from Egypt and Ecuador, who said it would be very difficult for them to join online board meetings and other options should be considered.

Action on the ground

Saleemul Huq, director of the Dhaka-based International Centre for Climate Change and Development, said the time had come to consider new ways of organizing the international climate process to reduce its high carbon footprint and complex logistics, but still get the work done.

“We need to be thinking innovatively about making these kinds of global meetings more efficient in terms of the outcomes and less dependent on thousands of people from all over the world flying into one city,” he said.

Instead of holding the annual U.N. summit in a different country each time, smaller-scale government negotiations could take place once a year in a set city where most countries keep high-level diplomatic staff who could represent them, such as New York, Washington or Bonn, he suggested.

Other participants – including green groups, businesses, city officials, indigenous people and researchers – could still influence the proceedings from afar, he added, pointing to the success of worldwide youth protests in driving climate change up the political agenda.

With the overarching international guidance for tackling global warming set back in 2015, the main task now was to accelerate the unfinished work of phasing out fossil fuels and protecting people from climate impacts on the ground, said Huq, a veteran advisor to poorer nations.

The action on climate is no longer happening at the UNFCCC but “in the real world,” he added.