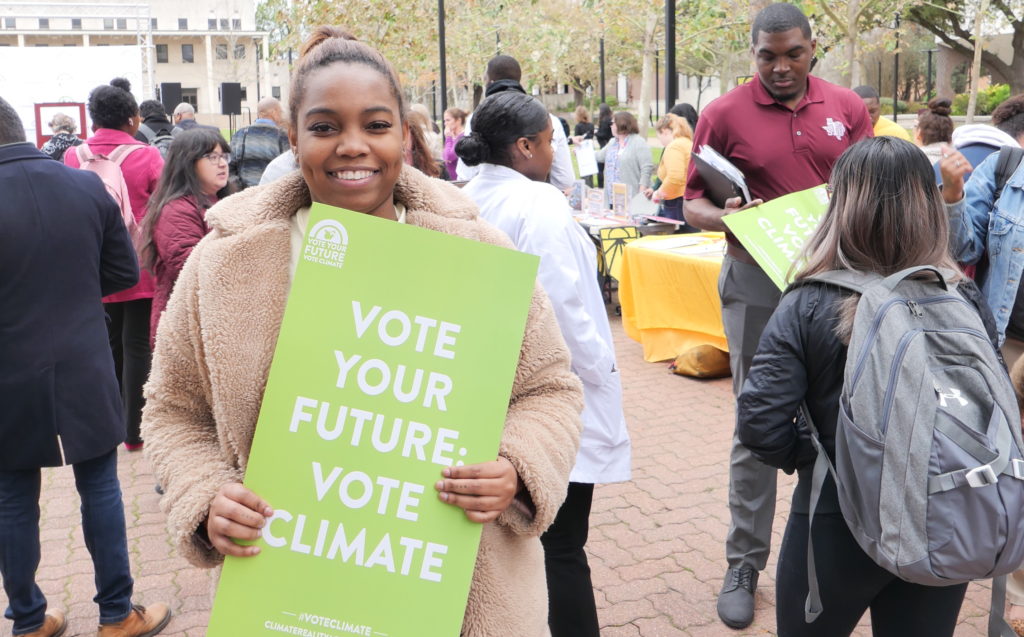 Ashley Alford, a senior at Texas Southern, is planning to go to medical school after graduation.

Texas Climate News will be reporting throughout 2020 on events and trends at the nexus of climate change, citizen activism and electoral politics. This is the first in that occasional series of articles.

It was cool and cloudy with a little drizzle now and then, but the weather didn’t dampen the spirits at a combination voter-registration and climate-action rally last month at historically black Texas Southern University in Houston.

Al Gore, the former vice president and a world-famous climate-action campaigner, had come to TSU to kick off a national campaign to register voters concerned about climate change and then inspire them to vote in November.

Gore was introduced by Robert Bullard, a professor at TSU whose sociological research and activism, dating to the 1970s, is credited with catalyzing the environmental justice movement. 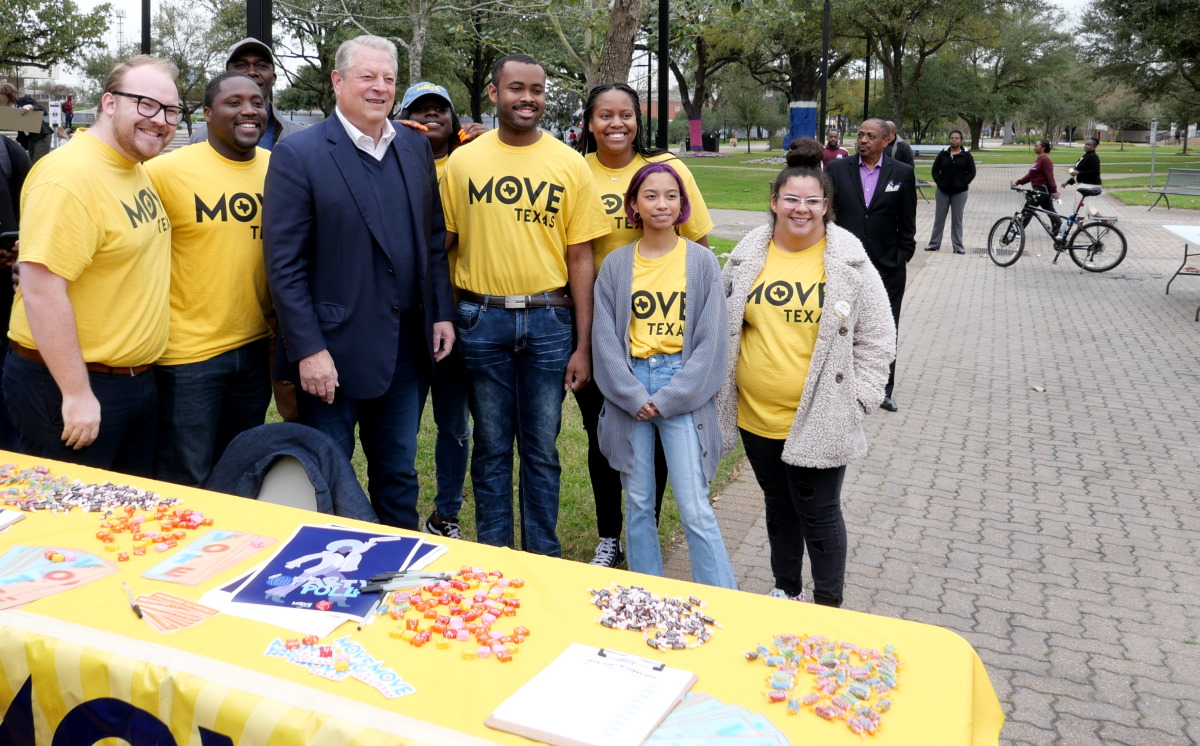 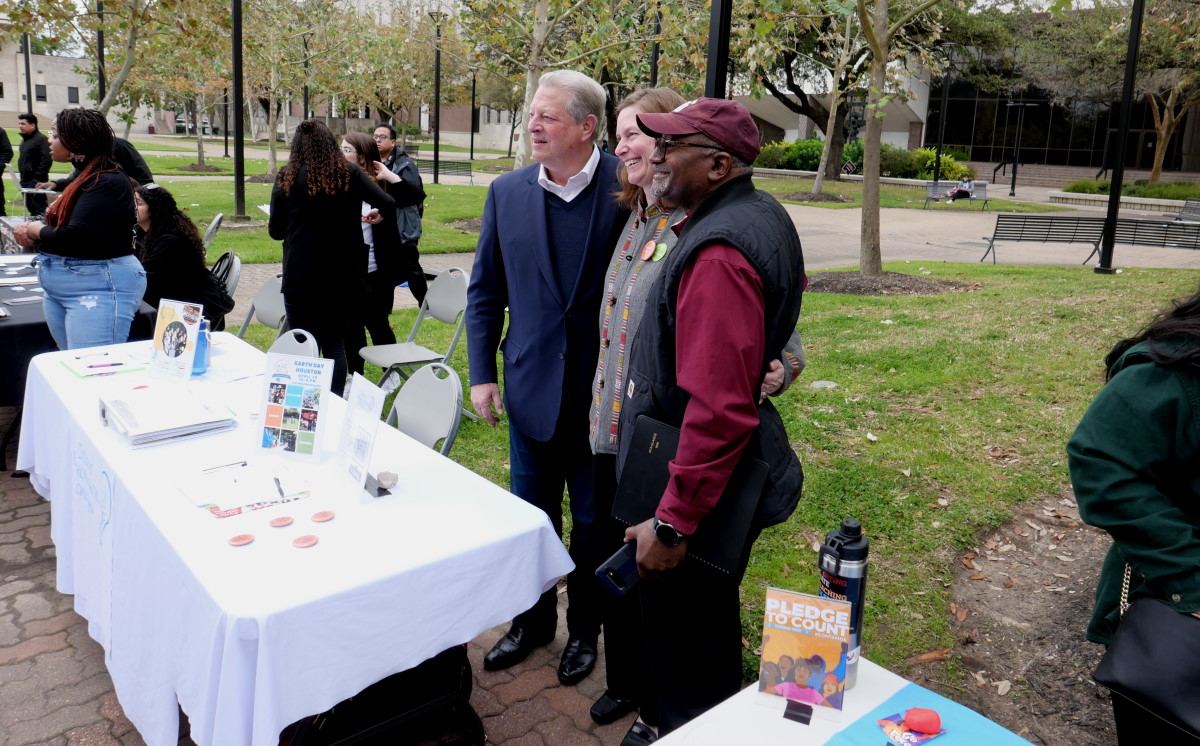 Gore poses with Rachel Powers, executive director of Citizens’ Environmental Coalition of Houston, founded in 1971, and Robert Bullard, distinguished professor of urban planning and environmental policy at TSU. Bullard is known as “the father of environmental justice” because of his pioneering research about disproportionate environmental impacts.

“Vote Your Future: Vote Climate,” the campaign launched at TSU by the Gore-founded Climate Reality Action Fund, will target six states and include his visits to other college campuses. Besides Texas, the project will concentrate on five states more commonly regarded as battlegrounds in presidential elections – Michigan, North Carolina, Pennsylvania, Florida and Nevada.

With his revved-up delivery of a campaign-style speech at the TSU rally, Gore seemed at times like he was trying to match the booming projection of a DJ’s preceding tunes. The address melded several themes.

He linked environmental justice – “not only in the United States but everywhere in the world” – and climate change. He explained climate-science basics. He highlighted Houston’s vulnerability to extreme weather spinning off from the disrupted climate, including “rain bombs” from “the Gulf of Mexico, one of the fastest-warming bodies of water in the entire world.” He stressed Texas’ important roles as climate-change cause and cure, decrying the oil industry’s “propaganda campaigns” but praising the state’s national leadership in wind energy and growth in solar power. And he urged his audience to register and vote. 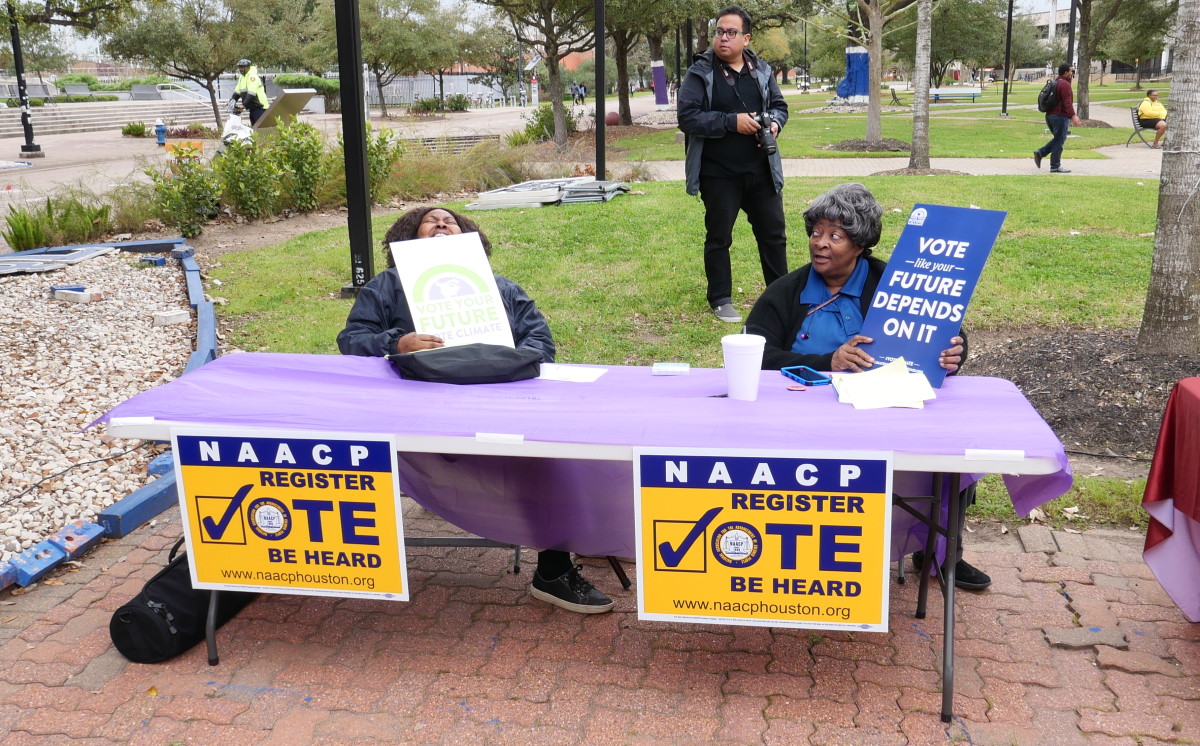 Representatives of NAACP Houston Branch were ready to register voters.

“Environmental justice has to be at the center of how we understand the climate crisis that’s unfolding,” Gore told the rally. “The basic facts are not that complicated, and neither is the remedy. The remedy is to have a dramatic increase in voter participation.”

Gore hasn’t endorsed anyone in the race for the Democratic presidential nomination, but he made clear that he sees defeating Donald Trump, his opposite on climate issues, as crucial.

“Democracy has never been more at risk in the modern history of the United States of America than it is today. We have an attorney general who’s the gravedigger for the rule of law. We have a neo-monarchist. We have a threat to the survival of representative democracy that calls for a response.” 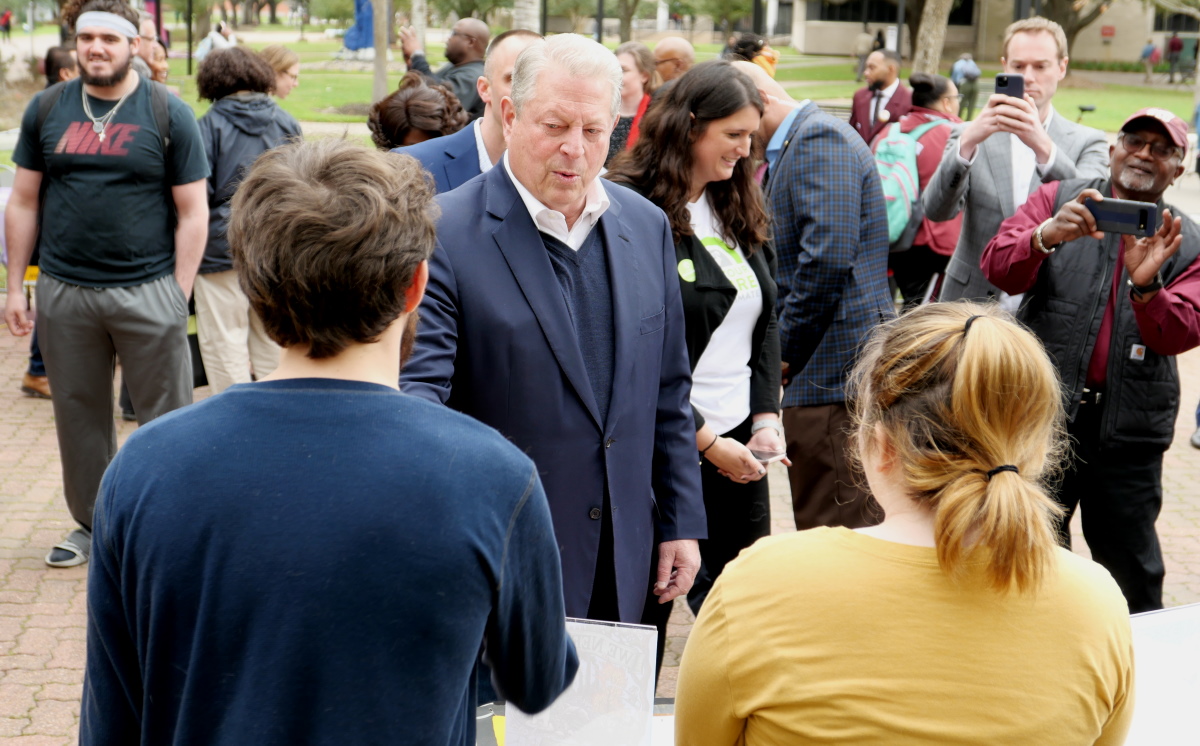 Gore greeted representatives of the Sunrise Movement, an organization led by young people promoting political action against climate change. A major focus for the group is advocacy of the Green New Deal, a multifaceted proposal addressing climate change and economic inequality. Gore was happy to see the Sunrise members at the rally: “Sunrise!” he exclaimed. “I’m so glad you’re here. Keep up the good work.”

The national voter campaign is going to be a partnership project, he said. “This isn’t a branding exercise for the Climate Reality Action Fund. This is a team sport.”

After his talk, Gore mingled with the attendees, greeting and praising and posing for photos with representatives of different groups that had set up voter-registration and literature tables. They included the NAACP, Sunrise Movement, MOVE Texas and Citizens’ Environmental Coalition of Houston. 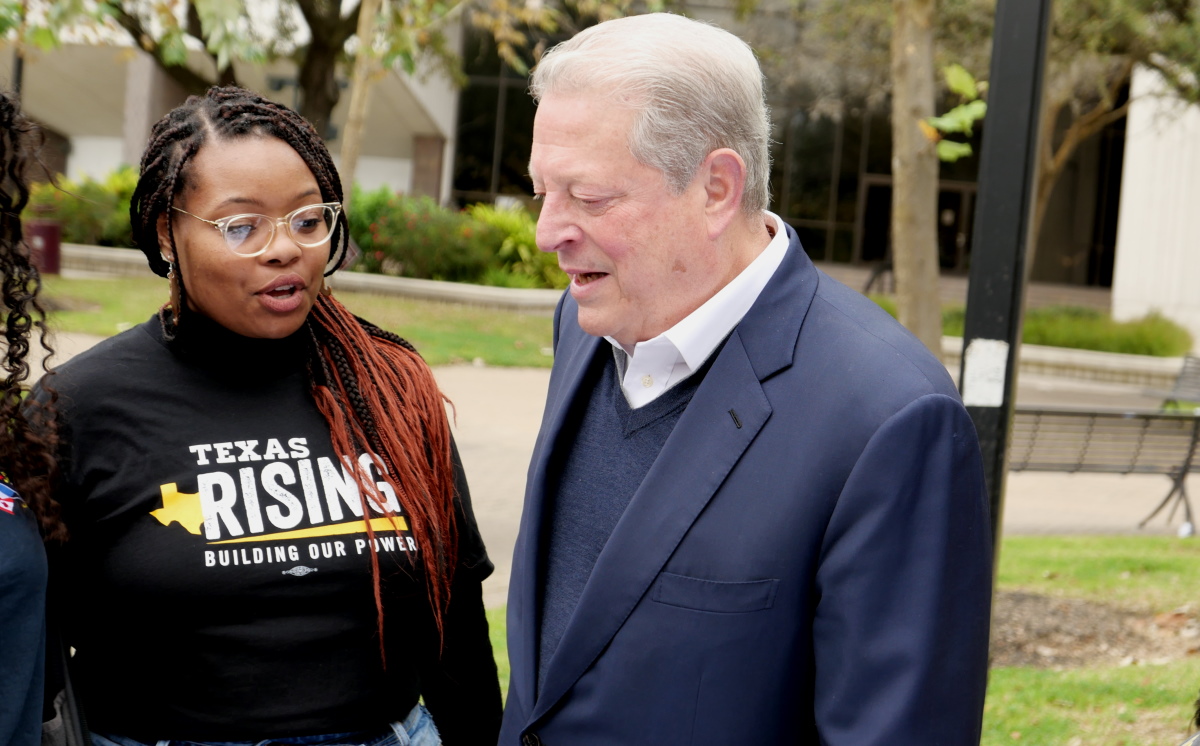 A representative of Texas Rising talked with Gore. Texas Rising says it “honors young people – especially young people of color” as it is “creating a more inclusive state and promoting equality and social justice for all Texans by organizing, advocating, voting and training future leaders.”