The UK-based show’s “Fully Charged LIVE” event drew standing-room crowds in Austin for its showcase of an array of new electric vehicles – from bicycles to Texas-size pickups. An omen of the state’s automotive future? 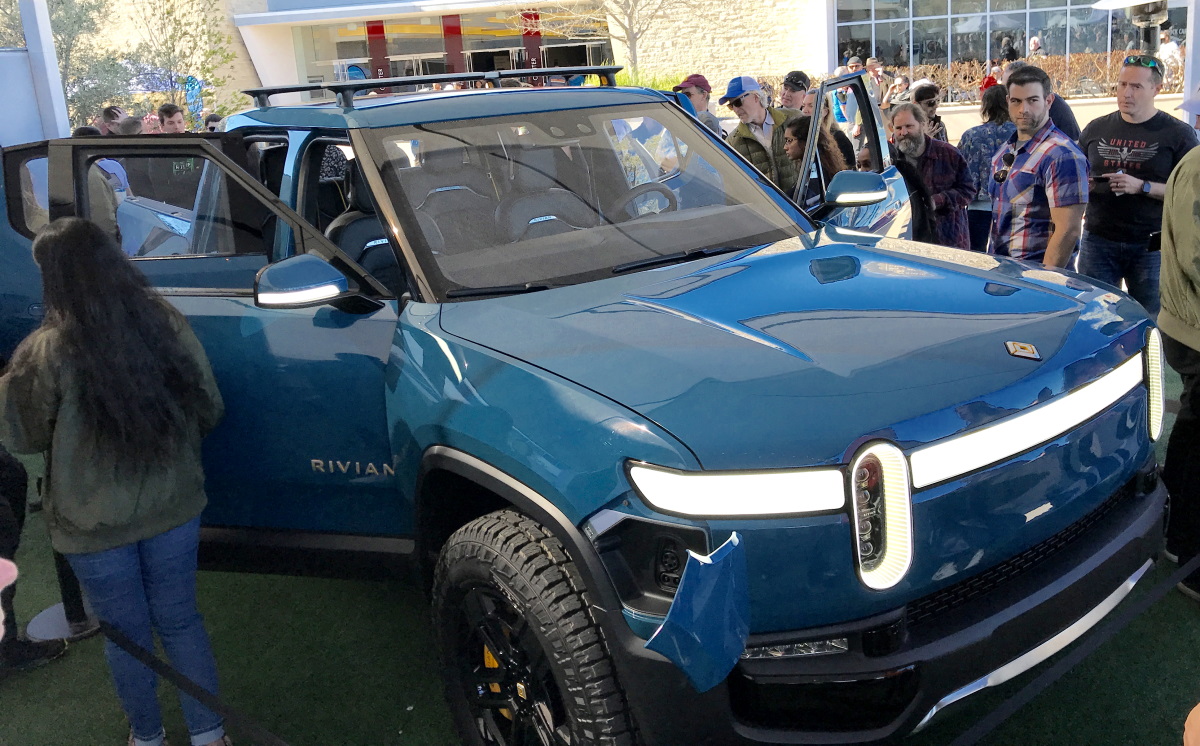 Skeptics will be excused for wondering why the United Kingdom-based cast and crew of YouTube’s Fully Charged show picked the Lone Star State as the first international venue for their Fully Charged LIVE production – a mashup of a trade show, interview panels and the latest in sustainable-transportation and renewable-energy products.

The sold-out event, held Feb. 1 and 2 at Austin’s Circuit of The Americas Formula 1 racetrack, drew more than 4,000 attendees over the two days, organizers said. More than 30 percent came from outside Texas. It was a madhouse.

With more than 600,000 subscribers and 83 million views, Fully Charged is among the most popular of the YouTube channels focused on electric vehicles and alternative energy. That enthusiasm was on full display in Austin, with densely packed clusters of green-energy devotees craning, throwing elbows and hoisting camera phones to catch a glimpse of a Zero electric motorcycle, a Porsche Taycan electric sports car or something in between, like a three-wheeled electric Arcimoto Fun Utility Vehicle (FUV). Standing-room-only auditoriums hosted panel discussions with topics like “Can Electric Vehicles Compete?” and “Texas vs. California: Who Will Be the Clean-Energy Champions?”

So, yes, seriously. Notwithstanding its lore as a fossil-fuel fiefdom lorded over by outsized personalities in pointy boots and big hats, Texas is now legitimately duking it out to be the nation’s clean-energy capital. Greta Thunberg wannabes and man-bun types may not yet be overrunning the state’s energy sector, but important changes are undeniably under way.

While oil and gas still rules, the state has established itself as the country’s largest producer of wind energy by far, with solar generation gaining traction. For those and other reasons, the decision to hold the event in Texas should have come as no surprise, said Chelsea Sexton, a longtime EV advocate and panel moderator at Fully Charged LIVE.

“Texas is no longer just an oil and gas state. It’s a renewable state in general. More has been happening here than some people may think,” said Sexton, a Californian who helped launch GM’s groundbreaking EV1 electric car in the 1990s, and who figured prominently in the 2006 documentary Who Killed the Electric Car?

“What’s been going on in Texas over the last 15 years is remarkable in terms of the transition to renewable energy,” she said. “Our decision to bring the show to Texas might seem unlikely if you don’t live here already.” 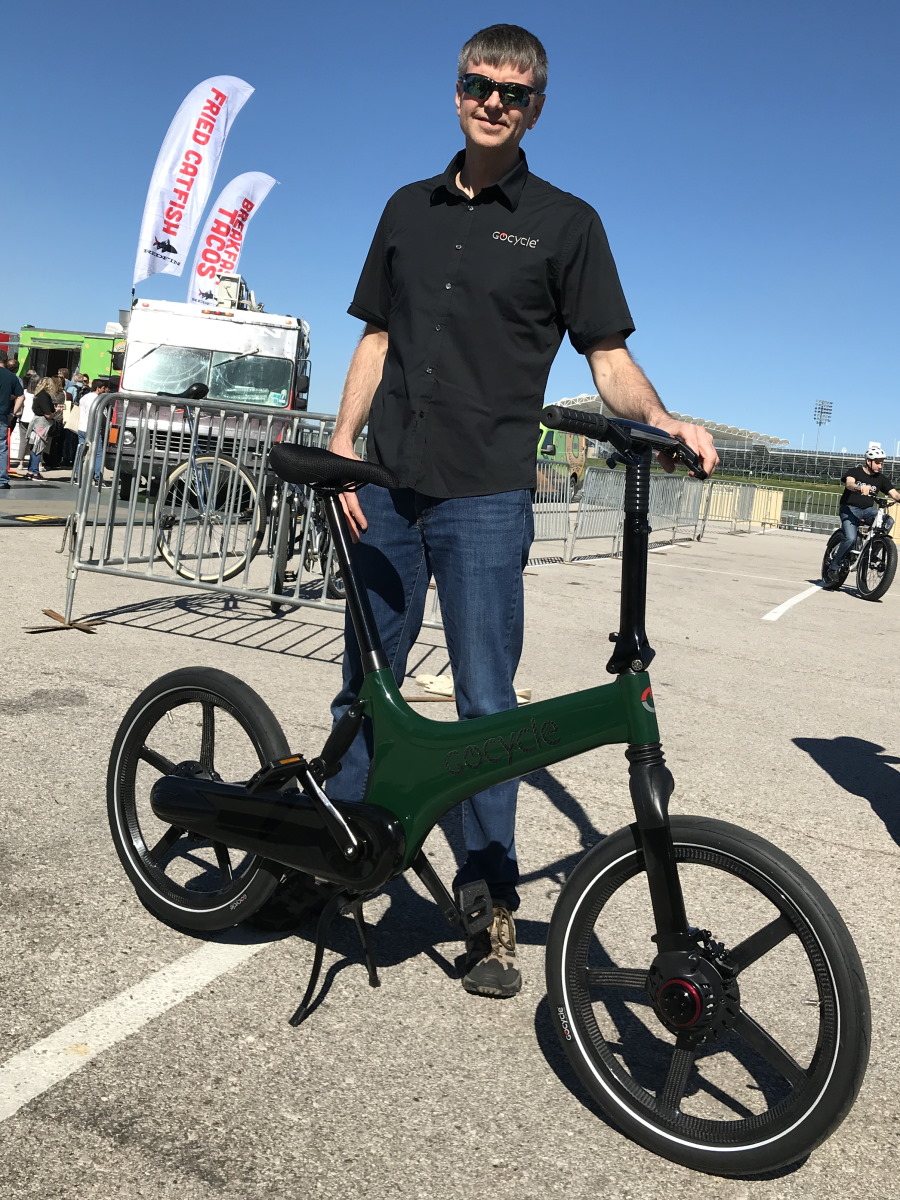 Gocycle inventor and founder Richard Thorpe displays the foldable electric Gocycle, with a range of up to 60 miles and a top speed of 20 mph.

Observing the products on display at Fully Charged LIVE was like riding a time machine into the near future. Every new vehicle was exclusively battery electric, from a hulking Rivian pickup truck to an elegantly engineered Gocycle electric bicycle that folds up miraculously for one-handed toting. The quirky Arcimoto, which “could only be dreamed up by hippies living in Oregon,” according to spokesman Jonathan Miller, splits the difference with seating for two, motorcycle handlebars in place of a steering wheel and extreme operating efficiency equivalent to 173 miles per gallon.

The weirdly cool FUV is intended to be an electric vehicle for ordinary folks – an affordable runabout with the potential to get more people driving electric. “We started looking at the pattern of everyday driving. For 90 percent of miles driven in America right now, only one or two people are in the car. So, we thought, ‘OK, we can make a two-seater,'” Miller said. “And the average American only drives 30 miles per day. This vehicle goes 100 miles per charge in the city, about 60 miles on the highway. It has a 75-mile-an-hour top speed, so you can take it on the freeway.”

More sporty than luxurious by design, the FUV’s standard equipment nevertheless includes heated seats, heated handlebar grips and lockable rear storage. The doors pop on and off like a Jeep Wrangler’s. The FUV retails at $19,900, not counting federal EV tax credits or state rebates. A base model with a sub-$12,000 price tag is in the works. For now, Arcimoto’s Eugene, Ore., factory is delivering FUVs on the West Coast only, but nationwide distribution is planned.

From race cars to e-bikes

Farther out on the portable-mobility scale, the futuristic Gocycle generated long queues full of people happy to wait their turn for a spin around a roped-off section of parking lot. The novel electric bicycle is the brainchild of Richard Thorpe, a past engineer for McLaren Automotive, known for its ultra-high-performance street cars and racing machines. The Gocycle presents itself as both a work of art and a triumph of engineering.

Though certainly a bicycle, the Gocycle appears to have leapfrogged bike-design convention and landed in new territory. An electric motor powers the front wheel, while human feet on pedals provide rear-wheel thrust. (If you insist, you can cruise on electric power only.) Front-to-rear weight distribution is 50/50. The folding mechanism, astonishingly fast and simple, makes the bike almost disappear into itself. Yet, in a few laps around the track, the Gocycle demonstrated rocklike solidity, a serene ride and a reassuring kick when needed from the silent dynamo out front.

Having founded Gocycle in 2002 and initiating U.K. sales in 2010, Thorpe said he started about 10 years too early, but is thrilled to see the electric-bike market finally picking up speed. U.S. sales began three years ago. “We focus on light weight and versatility. So, we’re not a product that’s going to put a huge motor on with a bunch of batteries that’s going to cruise around like a scooter or a motorcycle,” Thorpe said.

“We believe strongly in health as well as the environmental aspects of electric mobility. It’s a product that you can go three, 10, 20 miles commuting to work, or running to the shops, or just doing stuff that you may have taken your car before. It has features that help you store the product inside or out, without dropping grease on the carpet.”

Of course, a pickup

This being Texas, the big Rivian electric pickup naturally drew a crowd. An obvious rival to Tesla’s recently announced Cybertruck, the Illinois-built Rivian (deliveries begin this year) sports a more conservative look than the Tesla’s post-apocalyptic vibe but promises a Tesla-like 3-second sprint from 0 to 60 mph.

For reference, that’s acceleration identical to a Porsche 911 Carrera S. Parked alongside the R1T was the company’s soon-to-be-launched and equally quick electric SUV. Think Range Rover in outer space. Both vehicles advertise up to 400-plus miles of roving range. The truck starts at $69,000, the SUV at $72,500.

Meanwhile, out on the Circuit of The Americas’ surrounding racetrack, conventionally-powered Porsches, Corvettes and other mechanical exotica screamed past like banshees, an all-day reminder that, despite the electric eye candy parked temporarily on the infield, the petroleum era carries on.

The U.S. is not among the 13 countries that so far have proposed banning future sales of vehicles powered by fossil fuels. But with industrial peers like China (the world’s largest auto market), Japan and Germany well along with such plans, and the U.K.’s intention to stop all sales of gasoline, diesel and even hybrid vehicles by 2035, the market itself is likely to force major change here.

Texas may not be the first to turn that corner, but it has shown signs that it won’t be the last. In addition to its ascending leadership in renewable energy, the state’s residents are snapping up EVs by the thousands, with Texas ranking fifth nationally in EV sales, according to the website EVAdoption.com.

So, instead of choosing a predictable venue like California or Oregon for its first North American show, Fully Charged LIVE settled on Texas. “One of our missions is to grow beyond the obvious places,” said Sexton, the EV sage.

If trends and shifting sensibilities are any indication, it may not be too long before Texas becomes one of those obvious places.

John Kent, a contributing editor of Texas Climate News, is a Fort Worth-based writer specializing in transportation and environmental topics.