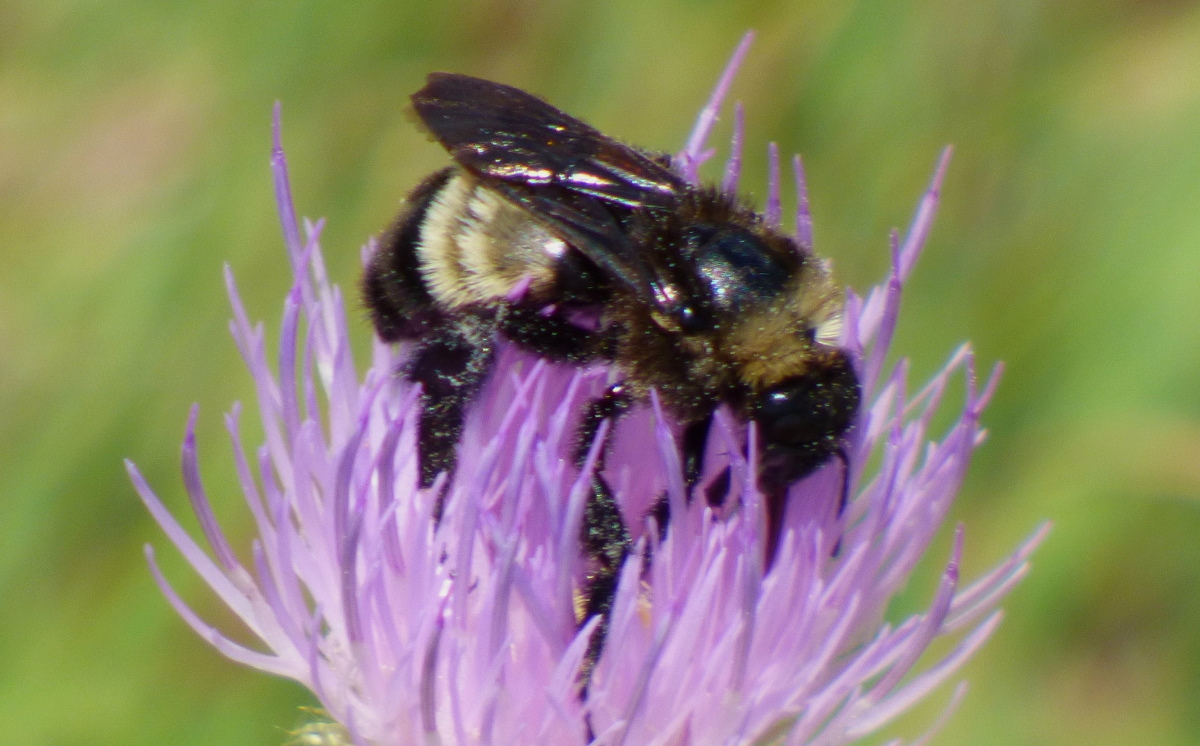 An American bumblebee at Travis Farm Park in Murphy, Texas

What Thompson sees with her colonies is an example of the ongoing, widespread decline of bees and other pollinators. While Texas bees may have it slightly better than bees in other states, the insects are facing considerable challenges. And they’re starting to feel the effects of global climate change.

These trends seem to be at odds with recent steps by the federal government. Over the summer, the U.S. Environmental Protection Agency approved the broad use of an insecticide called sufloxaflor that the agency – and the product’s makers – acknowledge is very toxic to bees. The government agency that surveys honey bee health across the country also announced it was suspending data collection for several months, citing budget restrictions.

Bees and other pollinators play a crucial role in many ecosystems across the globe. They also play an important role in agriculture, with pollination adding over $15 billion in crop value every year in the United States for crops like nuts, vegetables, and fruits, according to the U.S. Department of Agriculture (USDA).

From April 2018 to April 2019, U.S. beekeepers lost about 40.7 percent of managed honey bee colonies, according to the Bee Informed Partnership (BIP), a nonprofit that studies bee health in the United States. Over the last eight years, colony losses during winter months have been “unsustainably high,” according to the USDA. In the 2017-2018 winter season, the last period BIP posted data for, all states posted colony losses. Texas lost about 26 percent of its colonies, placing it in the middle of the pack.

The hits are coming from multiple angles, says Juliana Rangel, a neurobiologist at the Texas A&M Honey Bee Lab. Invasive varroa mites are one of the primary problems for honey bees, Rangel says. They feed on the fat bodies of bee larvae and adults, essentially eating them “from the inside out,” and transmit viruses and diseases, she says. Many bees are already weaker and more susceptible to mites and disease due to poor nutrition, a result of landscape fragmentation, urbanization, and monoculture agriculture.

The chemicals used in modern agriculture affect these pollinators as well, Rangel says. Environmentalists largely blame neonicotinoids, a class of insecticide adopted in the 1990s. These pesticides target the neurological function of insects and scramble bee learning and cognition, Rangel says. Other chemical products, including those used by beekeepers themselves to ward off varroa mites and poisons that target plants or fungi, also seem to affect bees, sometimes in ways we still don’t fully understand, she says. In her research, Rangel has found this chemical load can mess with the pheromones bees use to communicate and can hamper mating.

It’s difficult to say whether Thompson’s honey bees, or any of the 800 species of bees native to Texas, face challenges unique to the Lone Star State, Rangel says. In fact, bees here may be somewhat better off than other places. For the most part, the state lacks the large-scale cultivation of bee-pollinated crops. Instead of the vast almond orchards of California, Texas has lots of cattle production and pastureland. These landscapes can be beneficial to bees, as they tend to be dotted with wild flowering plants rarely treated with pesticides, Rangel says.

A recent government decision may give bees in Texas and beyond one more thing to contend with. Before the EPA’s July 2019 decision, use of sufloxaflor was restricted to crops that don’t attract bees like corn and soybeans. That restriction went into effect following a court decision in favor of beekeepers and environmental groups who sued the EPA over its decision to approve the pesticide in 2013. (However, many states like Texas have successfully lobbied for emergency permission to use the pesticide on bee-attracting fields, like sorghum and cotton, for several years in a row.)

The regulatory change comes after the EPA canceled the registration for 12 neonicotinoids known to be toxic to bees earlier this year.

Part of what makes a pesticide like sufloxaflor so toxic is that it’s “systemic,” says Lori Ann Burd, environmental health program director at the Center for Biological Diversity, an environmental advocacy organization that is suing the EPA over this decision. The insecticide is taken up into the vascular system of the plant so that every part – including the nectar and pollen – has traces of the chemical. Leaders in the beekeeper industry, represented by the environmental legal nonprofit Earthjustice, also filed suit against this decision in September.

The new regulations expand the legal use of sufloxaflor to a wide range of new crops, including blooming plants attractive to bees like citrus, cotton, watermelons, and strawberries. The EPA says in its description of the decision that the pesticide is safe to use as directed on the label. Information for a sufloxaflor-based pesticide called Transform WG, for example, includes detailed instructions on when it is and is not safe to apply the product depending on the crop in question. Corteva Agroscience, formerly Dow Agrochemical, did not respond to requests for comment.

“EPA is providing long-term certainty for U.S. growers to use an important tool to protect crops and avoid potentially significant economic losses, while maintaining strong protection for pollinators,” said Alexandra Dapolito Dunn, assistant administrator in the EPA’s office of chemical safety and pollution prevention, in a press release about the regulatory change.

If the decision does end up having an impact on bees, it could be more difficult for the government to detect. In July, the USDA’s National Agricultural Statistics Service said it would halt collection of its usual quarterly data for the annual Honey Bee Colony Loss Survey. A representative for the NASS clarified in an email that the suspension is for the fourth quarter of this year’s survey and “is considered temporary as future fiscal year budgets are not yet determined.”

In Texas, regulatory protection for bees so far is limited. In August, Travis County adopted a resolution to stop the use of neonicotinoid pesticides within its borders, expanding an effort from the previous year by the City of Austin. College Station has also stopped using the pesticides. At the state level, several bills were introduced in the Legislature this year aimed at protecting pollinators, limiting pesticide use on public lands, and using pollinator-friendly plants, says Luke Metzger, executive director of Environment Texas, an environmental nonprofit that promoted the efforts. The legislation is pending until the next state session in 2021. Thompson helped lobby on behalf of Environment Texas.

Going forward, scientists in Texas and beyond will have to track yet another threat to these buzzing pollinators: climate change. “There’s no doubt that climate change and global warming is affecting keeping bees in our state in many ways,” Rangel says.

For example, warming temperatures are changing the normal rhythm of the spring season, sometimes putting plant blooms out of sync with pollinator activity, Rangel says. The slow moving, severe storms connected to warming temperatures can keep bees cooped up in their hives for days or weeks while stripping nectar from flowers. Intense droughts can stop plants from producing nectar or pollen altogether. Bees are also picky about the weather they need to mate, and extreme weather can limit the windows of time when the insects are actually able to procreate, she says.

Despite the challenges, Thompson is optimistic for the future. People in Texas know that bees are important and that they’re struggling, she says. “I always say that’s the easiest part of the job – I don’t have to sell anything.”

Jillian Mock is a contributing editor of Texas Climate News. She is an independent writer with a penchant for reporting on climate change, wildlife conservation, Earth science, and health.