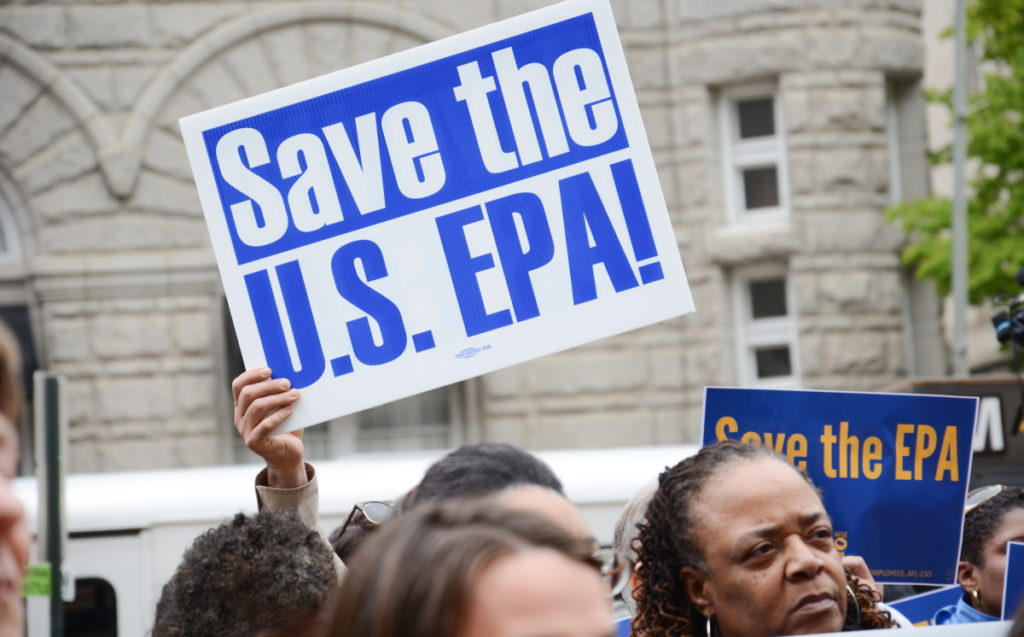 A rally organized by the American Federation of Government Employees protested the Trump administration’s environmental policies in 2018 at the Washington headquarters of the Environmental Protection Agency. Union members, members of Congress and others participated.

It’s too early to say whether this foretells a long-lasting thaw in Republicans’ nearly monolithic opposition to federal climate action or is mainly an effort to court voters increasingly worried about climate change.

In either case, a couple of recent Texas-related appointments at the Environmental Protection Agency provided no evidence of any thaw within the Trump administration.

Support for strong action to cut greenhouse gases including carbon dioxide and methane presupposes acceptance of the scientific consensus that they are accumulating in the atmosphere and heating it dangerously.

Many foes of climate action now stop short of outright denial or mockery of climate science, claiming instead that no one really knows whether there’s much of a human role, or any, in today’s shifting climate.

Such shrugging “who knows?” rhetoric is often phrased along these lines: I believe in climate change. The climate has always changed. We can’t say if people are to blame this time.

Two recent Trump administration EPA appointees have offered variations on that science-contradicting theme in the past. Those statements have drawn renewed attention since the appointments were announced.

One appointee is Ken McQueen, a petroleum engineer who worked in the oil industry from 1982-2016, rising to executive positions. He was appointed last week to head EPA’s Region 6 office in Dallas, overseeing operations in Texas, Arkansas, Louisiana, New Mexico and Oklahoma.

The other is McQueen’s predecessor as Region 6 administrator, Texan Anne Idsal, an attorney who held key positions at the Texas Commission on Environmental Quality and Texas General Land Office before taking the EPA regional job in Dallas. She was appointed in June to be EPA’s acting assistant administrator for the Office of Air and Radiation at agency headquarters in Washington.

The EPA air office has played a crucial role in the Trump administration’s weakening of the Obama EPA’s climate-protecting rules aimed at cutting emissions from coal-fired power plants and new cars and trucks.

Neither McQueen nor Idsal have track records of accepting the sweeping scientific consensus that human activities are the main cause of recent planetary warming. Both instead have voiced versions of the “climate is always changing” stance that seeks to cast doubt on the consensus.

During his legislative confirmation to be secretary of New Mexico’s Energy, Minerals and Natural Resources Department in 2017, for instance, McQueen told state senators climate change was “‘just part of the history of the world we live in,’ implying it was a natural cycle and not human-caused,” the NM Political Report reported.

Idsal closely echoed the rhetorical device in 2017 upon her appointment as Region 6 chief.

“The climate’s been changing since the dawn of time,” she told the Dallas Morning News. “I wouldn’t rush into making any quick decisions based on current or pre-existing climate change. I want to see what continues to come out.”

She added that “science is never settled in any particular field,” and said she didn’t “necessarily think that it is settled here. … I think it’s possible that humans have some impact on climate change, the extent of which I have not made up my mind on.”

The world’s climate-science community says it is far more than merely “possible” that humans are responsible for recent, current and projected climate change.

Summarizing research findings until 2013, the Intergovernmental Panel on Climate Change, the leading international scientific organization on the subject, declared that it was “extremely likely that human influence has been the dominant cause of the observed warming since the mid-20th century.” In the IPCC’s terminology, “extremely likely” means 95 percent certain – the same certainty level of medical science that smoking causes cancer.

Such findings have been complemented by subsequent scientific reports since 2013 expressing more urgency about the need to act against climate change. But they haven’t daunted other EPA officials in the Trump administration, whose own statements on climate science have been consistent with McQueen’s and Idsal’s.

Idsal’s predecessor as chief of the air office, William Wehrum, indicated at his Senate confirmation hearing in 2017 that he didn’t accept the scientific consensus about the human contribution, claiming it was still “an open question” whether humans are the main cause of current climate change.

“I believe that man has an impact on the climate, but what’s not completely understood is what the impact is,” said Andrew Wheeler, the EPA administrator, at his own Senate confirmation hearing as deputy administrator in 2017.

Scott Pruitt, who preceded Wheeler as the top EPA official, said similarly at his confirmation hearing that “the climate is changing and human activity contributes to that in some manner.”

Pruitt said in 2018 that man-made atmospheric warming was not “necessarily … a bad thing” because “humans have most flourished” during periods of climatic warming in the past.