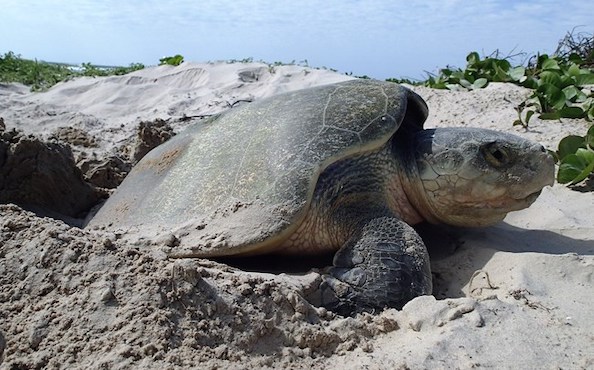 Scientists calculate that oceans are absorbing more than 90 percent of the heat being trapped by man-made emissions of carbon dioxide and other greenhouse pollutants. Researchers are examining the various impacts.

A third study took a close-up approach, examining impacts of global warming on one particular, critically endangered species – Kemp’s ridley sea turtles. The Kemp’s ridley is the rarest sea-turtle species and enjoys iconic status in Texas – it mainly nests on the state’s beaches, and Texans have worked for decades to help save it from extinction.

The number of Kemp’s ridley sea turtles exhibiting signs of hypothermia in the northwestern Atlantic – a condition known as “cold-stunning” – has dramatically increased since the 1970s, according to a recent paper in the journal PLOS One. The warmer the sea-surface temperatures in the Gulf of Maine from late October through early November, the higher the numbers of stranded sea turtles.

In the past 40 years, more than 4,700 Kemp’s ridleys stranded in Cape Cod, and since 2009 the annual count has often topped 100. With continued warming predicted for the Gulf of Maine as climate change progresses, the authors predict that more than 2,300 could be cold-stunned each year by 2031.

Lead author Lucas Griffin, a doctoral candidate at University of Massachusetts Amherst, said warmer sea-surface temperatures may be allowing Kemp’s ridleys to move farther north and to stay longer. The onset of winter then catches them there.

Cold-stunning – debilitating lethargy caused by prolonged exposure to cold water temperatures – often leads to death. Most sea turtles that cold-stun on the Texas coast are greens, but Kemp’s ridleys more commonly do so in the northwest Atlantic, where significant number of juveniles spend time in nearshore waters.

While cold-stun events likely affect a small proportion of the overall Kemp’s population, the authors argue for continuing recovery and rehabilitation, especially as these juveniles may return to the Gulf of Mexico to breed as adults.

Donna Shaver, chief of sea turtle science at Padre Island National Seashore, agrees. “Protecting these juveniles is very important. Even though they might be a minor proportion of the population, rehabilitation of cold-stunned sea turtles boosts the population and helps its resiliency,” she said.

Kemp’s ridleys nest primarily at the National Seashore, situated on a narrow barrier island along the lower Texas coast, and on beaches several hundred miles south in Mexico. At least one juvenile from the Northeast has been documented nesting at Padre Island, Shaver said, and it is likely others have nested in Mexico.

“The buzzword for saving these turtles is resiliency,” Griffin said. “If this area in the Northeast is important for the overall population, we have to make sure the turtles make it back down south.”