A ‘daunting’ challenge: What the major new climate report means for Texas 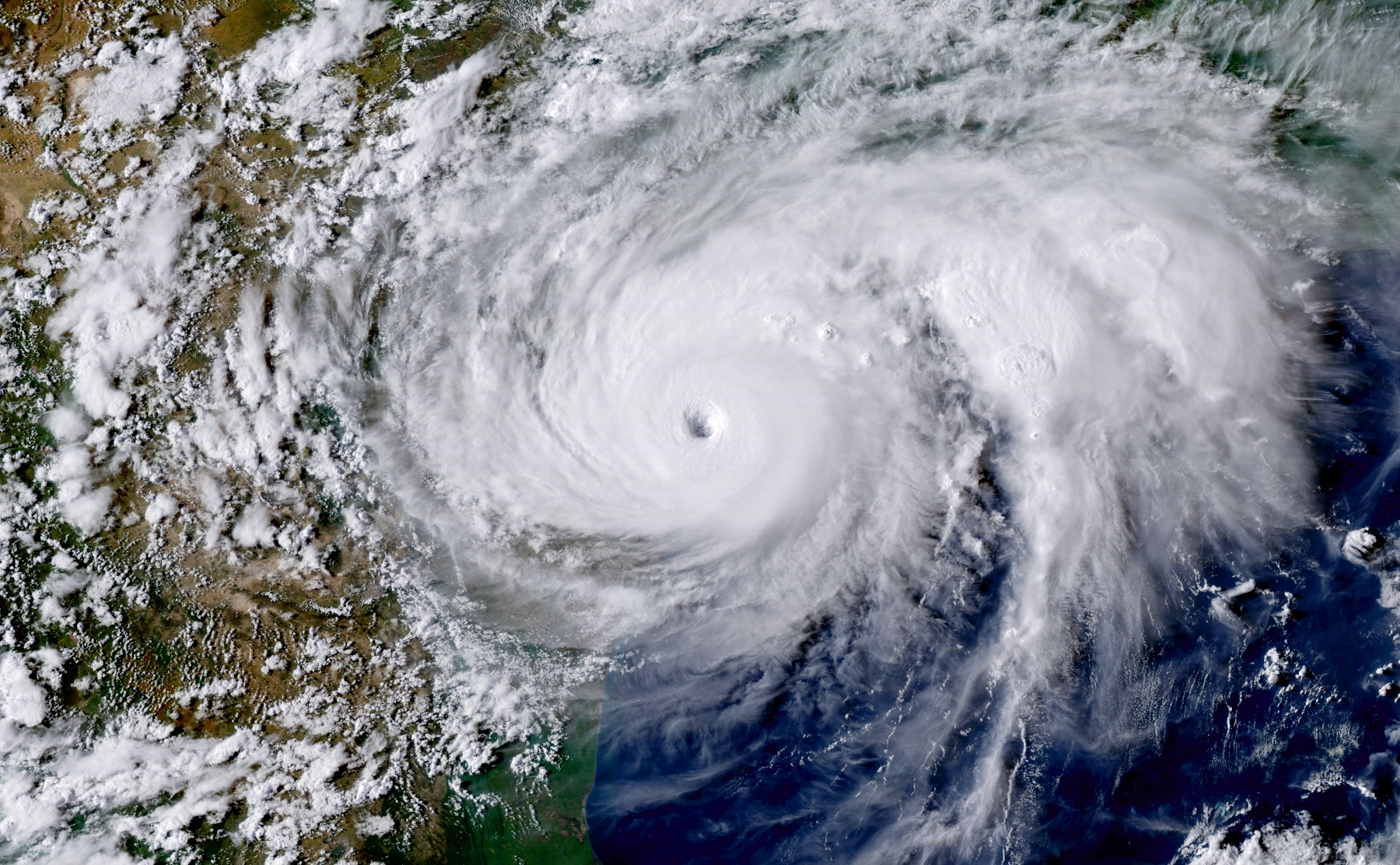 Hurricane Harvey prior to landfall in Texas.

A major new report from the world’s leading scientific body on climate change presents a daunting worldwide challenge, outlining dramatic pollution-cutting actions needed to limit some of global warming’s potentially devastating impacts by holding it to 1.5 degrees C (2.7 degrees F) instead of letting it reach 2 C (3.6 F) above pre-industrial levels.

The conclusions of the Intergovernmental Panel on Climate Change (IPCC) are global in scope but have crucial relevance for Texas.

The state is a major contributor to global warming with its enormous consumption and production of climate-disrupting fossil fuels. It is also a place that has sustained disastrous harm in recent years from record-setting heat, drought and flooding. Scientists say those events were made worse by climate change and are harbingers of weather extremes that lie ahead as atmospheric warming progresses with continued emission of heat-trapping gases.

The Paris Climate Agreement of 2015 committed the signers (almost all nations in the world) to voluntary, self-selected cuts in climate-altering emissions to keep global warming below 2 C and to try not to exceed a 1.5 C increase. Small island nations vulnerable to rising sea levels caused by global warming had pressed for the 1.5 C effort.

The new IPCC report was commissioned by the Paris Agreement signers to examine the 1.5 C challenge – what would be needed to hold warming to that level and what climate-change impacts could be experienced and avoided by doing so. Thousands of expert reviewers assessed more than 6,000 scientific references for the report, prepared by 91 authors from 40 nations.

The earth’s average temperature is already 1 C (1.8 F) above pre-industrial levels, and holding the extra warming to 1.5 C will require “rapid, far-reaching and unprecedented changes in all aspects of society” involving sweeping reductions in greenhouse pollution, the IPCC concluded.

Specifically, the IPCC said staying below warming of 1.5 C will require eliminating a whopping 45 percent of the world’s 2010 volume of emissions of carbon dioxide (the major human-produced greenhouse gas) by 2030 – just 12 years from now – and essentially ending humanity’s emission of greenhouse pollution by 2050.

Amid a rapid transition from coal, oil and natural gas — the key fossil fuels, all crucial in the Texas economy — electricity production from renewable sources would need to rise from its portion of 20 percent today to as much as 67 percent.

“Overshooting” warming of 1.5 C would mean that “future large-scale deployment” of technologies to remove heat-trapping carbon dioxide from the atmosphere would be needed to bring the planet’s average temperature back down to 1.5 C above pre-industrial levels.

In one of many sobering warnings, however, the report said the necessary carbon removal in such a scenario “can only be achieved if global CO2 emissions start to decline well before 2030.”

While holding warming to 1.5 C would avoid some major impacts of a rise to 2 C, it presents complex challenges, the IPCC explained:

The impacts of climate change are being felt in every inhabited continent and in the oceans. However, they are not spread uniformly across the globe, and different parts of the world experience impacts differently. An average warming of 1.5 C across the whole globe raises the risk of heatwaves and heavy rainfall events, amongst many other potential impacts. Limiting warming to 1.5 C rather than 2 C can help reduce these risks, but the impacts the world experiences will depend on the specific greenhouse gas emissions “pathway” taken. The consequences of temporarily overshooting 1.5 C of warming and returning to this level later in the century, for example, could be larger than if temperature stabilizes below 1.5 C. The size and duration of an overshoot will also affect future impacts.

The authors said global impacts of 1.5 C of warming would have a combined cost of $54 trillion. The planet’s total wealth is calculated to be about $500 trillion. The same research behind the 1.5 C cost put the impact of a 2 C increase at $69 trillion. The U.S., the IPCC authors said, could lose about 1.2 percent of its gross domestic product for each 1 C of extra warming.

TCN asked several climate experts from different fields at Texas universities for their views of the new IPCC report’s significance for the state. Their emailed responses, in some cases lightly edited:

Sass noted that “the amount of energy needed to be added to the atmosphere to increase its temperature by 0.5 C is equal to all of the energy generated in the world over the past five years.”

“That energy increases the wind velocity, the intensity of a storm or hurricane, causes more rain to fall, melts glaciers and sea ice, raises sea level, makes forest fires more devastating, stresses crops – the list seems endless and makes the change in temperature appear to be an almost insignificant part of the total effects of climate change that accompanies the rise in temperature by 0.5 C. That is what we can expect if the global temperature is increased from its current value of 1 C above the pre-industrial revolution to 1.5 C above it.

“If we should go to 2 C increase, we could very easily find the world a very unpleasant place in which to live, requiring us to immediately try to invent ways of lowering that temperature back by 1.5 C!

“What does this news mean for Texas? Imagine a hurricane that produces 10 or 20 percent more rain than Harvey. Consider a forest fire that that is driven by higher winds to be twice as devastating as the fire that hit near Bastrop in 2011, where nearly 4 million acres of forest burned and 2,000 homes were destroyed. Contemplate the destruction of homes along the Bolivar Peninsula by Hurricane Ike in 2008 with its 20-foot storm surge and spread that destruction for miles up and down the coast as future hurricanes intensify. Visualize the destruction along the coast and inland when sea level rise reaches three feet or more above its current value. Mourn with the farmers as increased drought and higher temperatures reduce crop yields by tens of percentage points.

“The only way that this climate trend can be stopped or reversed is by enlightened management of carbon-based, non-renewable fuel – coal, oil and gas. According to the IPCC report, we have just twelve years to find a way and to implement change. There are ways that are even now being developed but that need massive public support to come to fruition. Fossil fuel and its gigantic current supply-and-demand infrastructure can be a part of this effort. After all, it is not the fossil fuel that is the problem, but the carbon dioxide that burning fossil fuel produces. It is just another waste byproduct that needs to be dealt with.

“Every day, the sun provides 10,000 times as much energy as the world needs, and it is available without gigantic amounts of greenhouse gases. We must learn to use this energy in wind, solar and biofuel forms as well as yet undiscovered technologies. This IPCC report is not necessarily an announcement of the end of civilization as we know it, but rather a call to action and whole-hearted commitment on the part of every person on the face of the earth.”

“What do global targets mean for Texas? Many of the risks we face right here in Texas scale with increasing global temperature. Stronger and more frequent heat waves, drought risk and more heavy precipitation associated with storms and hurricanes: All of these are projected to increase as the world warms, and the more it warms, the greater the increases we will see.”

“Portions of the report that focus on sea-level rise need to be assessed in light of the importance of the rate of rise and not just magnitude, when considering the impact on the Texas coast.

“The Texas coast is dominantly (86 percent) composed of barrier islands and peninsulas and research has shown that barrier shorelines are very sensitive to an acceleration in sea-level rise, which is already occurring at a rate five times the long-term rate (past 4,000 years).

“The new report calls for an irreversible rise that, in the best-case scenario, will double by the end of this century and that will have a profound impact on our coast.”

“No one knows how close the climate system currently is to exceeding 1.5 degrees C. We’ve had about 1 degree C of warming since preindustrial, but warming lags emissions so there are several tenths of a degree of ‘committed warming’ in the pipeline. This is warming that we have already emitted greenhouse gases for, but the warming has not yet arrived due to lags in the climate system (basically, it takes a long time to heat the oceans). It may be that we’ve already committed ourselves to 1.5 C.

“Even if we have not committed ourselves to 1.5 C, though, we are pretty close.  In that case, avoiding 1.5 C means we need very, very steep emissions cuts. They are daunting.

“If we can’t cut emissions that fast, another option is to pull carbon dioxide out of the atmosphere.  That’s physically possible, of course, but the price is unknown, and it would require an enormous effort to build the infrastructure. So from a practical standpoint, I don’t know if this is any more possible than just cutting emissions in the first place.

“Our final option for keeping temperatures below 1.5 C is ‘solar radiation management’ – adding aerosols to the stratosphere to reduce incoming sunlight. We know that will work, and it probably won’t cost that much, but it comes with a huge number of problems of its own, including side effects (changes in precipitation pattern) as well as governance issues.

“Against this backdrop, you have most governments in the world trying to expand energy supply as rapidly as possible. While many are trying to increase climate-safe energy sources, they’re also building coal-fired plants that will produce emissions for decades. So, considering all of this, I don’t see that we have much of a chance to stay below 1.5 C – unless we decide to geo-engineer by adding aerosols to the atmosphere.

“A final thought: I find these limits (1.5 vs. 2) to be pretty unhelpful. I understand the need to come up with a target, because it gives you an idea of the level of effort needed, but at this point we actually know what we need to do – reduce emissions as quickly as feasible. I’m worried that the difficulty of reaching 1.5 will cause some people/governments to become resigned to huge future impacts.

“Then they’ll say ‘we can’t do anything about this, so why even try’ – that’s essentially the message the Trump administration gave in rolling back the auto emissions standard from Obama.”

“Asking whether the world can hold warming below 1.5 degrees C is like asking whether Congress could balance the budget – yes, it’s possible, but we’ve seen nothing approaching the political will to do so.

“The IPCC report reiterates that we’re likely to see warming blow past the Paris goals later this century. For Texas, that reminds us of the urgency to prepare for more extreme droughts, floods, and heat waves.”

Bill Dawson is the founding editor of Texas Climate News. Ronald Sass and Katharine Hayhoe are members of TCN’s volunteer Advisory Board.