Sustainable Schools, an education program in Denton – fourth in a series 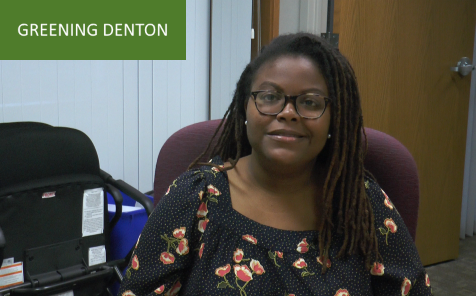 Denton’s plan to use 100 percent renewable energy isn’t the only manifestation of the North Texas city’s dedication to sustainability.

Student journalists’ “Greening Denton” project focused on the energy plan but also included the video interview below this text about the city’s complementary efforts in the field of environmental education.

Environmental education, according to Wikipedia, is a broad term that “refers to organized efforts to teach how natural environments function, and particularly, how human beings can manage behavior and ecosystems to live sustainably.”

In this video, student journalist Desmond Smith, a member of the “Greening Denton” team at the University of North Texas, interviews Vanessa Ellison, education coordinator in the Sustainable Schools program of Denton’s Sustainability Department.

Ellison discusses the program’s efforts in Denton’s schools, its partnerships with other local initiatives and other activities.

Thanks to her encouraging interactions with students, “I’m not as concerned with the younger generation as I once was,” she says.

But the job has its challenges, even in a city like Denton, known for being environmentally attuned. “Sustainability is somewhat of a foreign concept in Texas,” Ellison says.

This is the fourth and final installment in the “Greening Denton” series, a collaboration between UNT’s Mayborn School of Journalism and Texas Climate News.

“Greening Denton” was launched after the Denton City Council voted in February 2018 to make Denton only the second city in Texas, after Georgetown, to set a goal of using 100 percent renewable energy.

Students in the Mayborn School’s Spring 2018 senior news capstone class set out to learn what the city’s plan might mean – for local air quality, for Texas energy and for Denton’s progressive image.

Fracking, coal, batteries and the future of fossil fuels