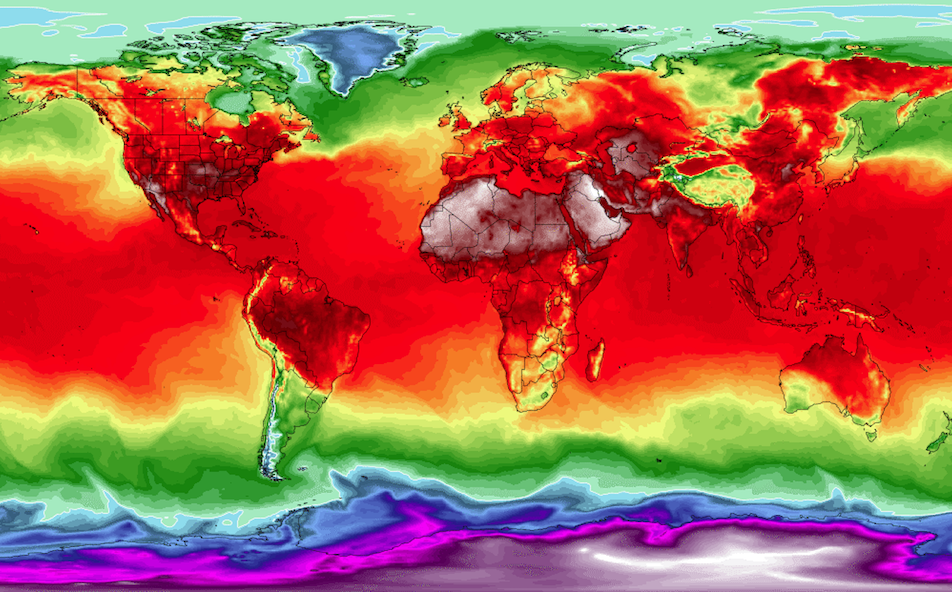 Representation of high temperatures on July 5 by the University of Maine’s Climate Reanalyzer project. Areas marked in shades of deep red had temperatures around 100 degrees F. Areas where the deepest red blends with white and areas marked in white had higher temperatures.

Without after-the-fact statistical analysis, scientists are reluctant to say human influence made an extreme weather event – a record-setting heatwave or torrential storm – even more severe.

That said, Texas and many other locations have experienced an attention-grabbing run of weather extremes recently that are precisely the kinds of events that researchers warn are becoming harsher and more frequent in a climate system disrupted by heat-trapping pollution.

Some examples from around the world during the past couple of weeks::

Coming on the heels of recent years’ Tax Day Flood and Memorial Day Flood, not to mention Hurricane Harvey, a downpour last week meant Houston has now had an Independence Day Flood.

It was the city’s wettest Fourth of July on record – 4.19 inches of rain at Bush Intercontinental Airport, 6.0 inches at Hobby Airport and up to 8 inches at other sites.

The death toll in western Japan in “torrential rains” and associated landslides had grown to 176 by Wednesday, the highest number to die in such flooding in that nation in more than 30 years.

Additionally, about 2 million had been evacuated.

Following a “balmy” July 4, Southern California became “a caldron of triple-digit temperatures and wildfires” by the end of last week, with some locations setting all-time high-temperature records on Saturday and others recording record-high temperatures for that date.

A days-long heatwave in Quebec claimed at least 70 lives, 38 of them in Montreal, which had the highest temperature in its recorded history –  97.9 degrees.

Many of the dead were reportedly elderly or in poor health. The experience illustrated traditional public-health warnings: Heatwaves can prove deadlier to vulnerable groups in places that aren’t prepared for them than in a generally hotter place like Texas. July highs in Montreal are usually in the 70s.

Climate scientists have found that higher overnight lows are a hallmark of global warming. In the week ending July 3, 227 U.S. sites set new daytime high-temperature records for particular dates, while 451 locations set new overnight records for the highest-ever low temperatures on those dates.

A city in Oman, situated on the southeastern corner of the Arabian Peninsula, posted the planet’s hottest overnight low temperature ever recorded on June 28 – 109 degrees.

An Algerian city in northwestern Africa last Thursday recorded what was probably “the hottest weather ever reliably measured” on that continent – 124.3 degrees.

Cities in the Caucasus region of Eurasia recorded all-time high temperatures for those sites – 105 in Georgia and 109 in neighboring Azerbaijan. Adjoining Azerbaijan to the southeast, Iran recorded its hottest-ever July temperature (127).