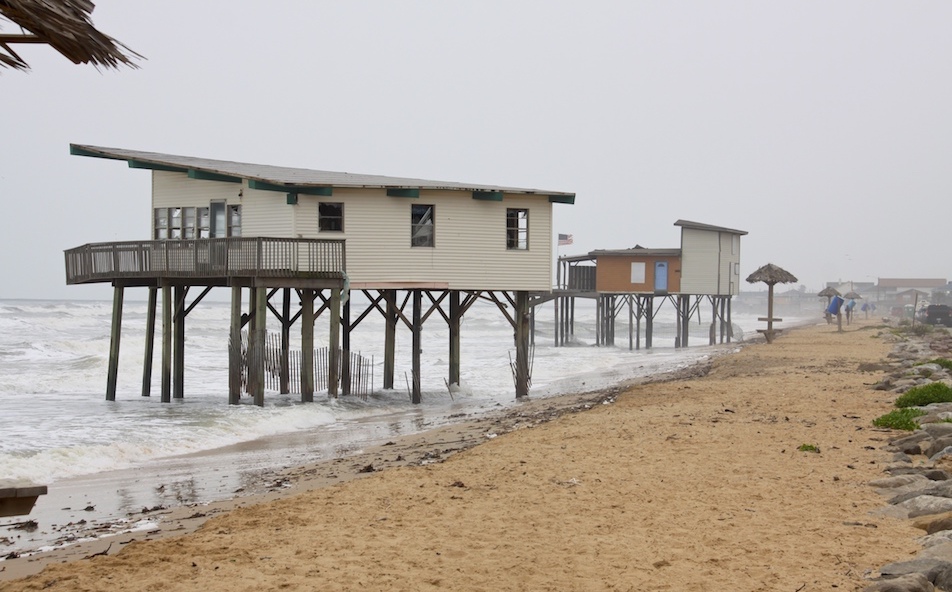 Two houses on a Brazoria County beach south of Houston illustrated the dual impact of a lack of sediment accumulation and sea-level rise when scientists visited that area during a 2013 conference on rising seas. The more than 80 researchers in attendance agreed that “growing risk” confronts coastal communities, the American Geophysical Union reported. Rice University oceanography professor John Anderson, a conference organizer, told the gathering that Galveston faces direct, immediate threats because human-caused rates of sea-level rise are “unprecedented and unsustainable.”

Is sea-level rise along the Texas Gulf Coast – one of the most visible and potentially devastating effects of human-induced climate change – finally getting the attention it needs?

Maybe. Hurricane Harvey, for instance, has somewhat increased general discussion of climate change in the Houston region amid the heightened public dialog about flooding.

Still, seven years after Texas officials censored references to climate change and sea-level rise out of a state-commissioned report on Galveston Bay, Texas still has an unspoken policy of speaking as seldom as possible about climate-change impacts, and basically never about what’s behind them. Effects are happening, state reports sometimes note, but apparently without cause.

“Unfortunately,” says one 2016 publication from the General Land Office, which oversees coastal management, “these Texas coastal habitats are disappearing as they are encroached upon by development and are eroded or inundated by rising seas.” The report never says why seas are rising.

The biggest recent news came on June 13, when a comprehensive study in the journal Nature said the melting rate of Antarctic ice tripled in the past 10 years. From 1992-1997, the southernmost continent lost about 49 million tons of ice per year; from 2002-2017, the loss rate grew to about 219 million tons per year.

If sustained, that rate of ice loss by itself would be enough to add about six inches to sea levels by 2100 – not counting additional contributions from Arctic melting and the oceans’ expansion. Counting all factors, the expected sea-level rise by 2100 is as much as 2.5 feet.

Another global threat is the potential collapse of the Thwaite Glacier on Antarctica’s western coast, being studied by scientists from the University of Houston and Rice University and others. The glacier, nearly as big as Washington state, is losing ice twice as fast as in 1990. By itself, its collapse would raise the world’s sea level by several inches.

Accelerating sea-level rise threatens homes, roads, buildings, drainage networks, water and sewer systems, many other public services and people’s lives. The Texas coast around Galveston Bay, including Houston, already is home to 20 percent of the state’s people and is growing, notes the Harte Institute for Gulf of Mexico Studies at Texas A&M Corpus Christi.

At the same time, along many parts of the Texas coast the land is sinking, worsening the impact of rising seas. Land subsidence happens when soil gets compacted because of groundwater withdrawals and oil and gas extraction. 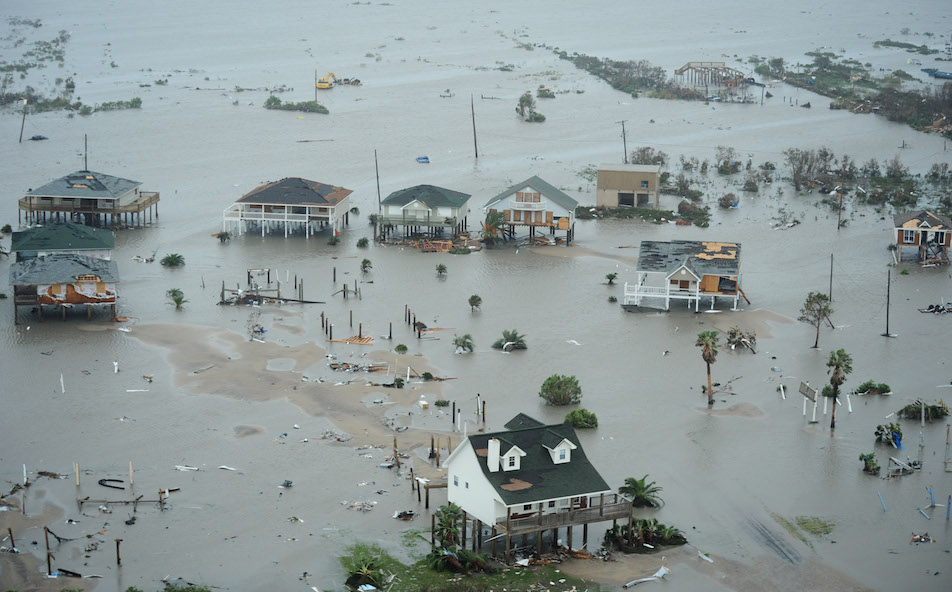 Galveston Island after Hurricane Ike in 2008

The western Gulf coast – Louisiana and Texas – is among the U.S. areas already seeing the biggest increases in coastal flooding. That will get worse, NOAA scientists say; by 2100, it could happen every day.

On Monday the environmental group Union of Concerned Scientists released an analysis of U.S. coastal real-estate at risk under those scenarios. By 2045 – within the term of a 30-year mortgage begun this year – 10,453 homes now existing in Texas would be at risk of chronic inundation, or flooding every other day. They house 17,860 people, are worth $2.23 billion, and produce $38.16 million per year in local taxes.

By 2100, the numbers increase eightfold – to 82,215 homes housing 137,116 people. Losing those homes, worth $17.25 billion, would cost local governments $297 million a year. That doesn’t count new homes built after this year or the risk to roads, companies or public systems.

According to a National Park Service report documenting the vulnerability of coastal parks nationwide, Padre Island National Seashore stretching along the southern Texas coastline could experience as much as 2 feet, 3 inches of sea-level rise by 2100.

With that much rise, a Category 4 hurricane – which the Gulf of Mexico has seen 10 times since the great Galveston hurricane of 1900 –would inundate the whole park, the report said.

Like the Texas Commission on Environmental Quality’s Galveston Bay report in 2011, the draft of the National Park Service report was initially censored to remove references to the role of human activity in climate change.

After media exposure and congressional questions, the National Park Service published a final version online last month – with the climate change references restored, but with no fanfare to alert the public to its findings.