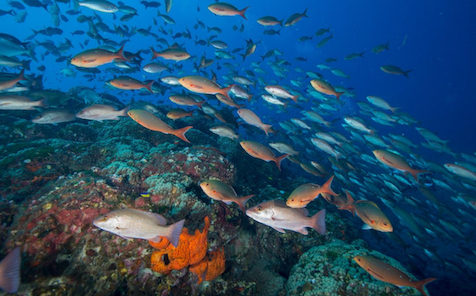 GALVESTON — Seven months on, scientists from the Flower Garden Banks National Marine Sanctuary and several universities continue to hunt for the most likely culprits in a mysterious die-off at the East Bank in July 2016.

They gathered recently at sanctuary headquarters in Galveston for a science symposium and agreed that low dissolved oxygen was “the most likely contributing causation factor” of the highly localized mortality event — the deaths of creatures of many species in a specific, limited area.

The event was discovered on July 25, and sanctuary scientists examining the area July 27 noted a clear demarcation between healthy and stressed or dying corals, with mortality of brittle stars, sea urchins, and bivalves as well — “anything that couldn’t move,” says Michelle Johnston, a research ecologist at the federally managed sanctuary.

Coral mortality was estimated at about 20 percent in the affected area. The East Bank is one of three areas that make up the sanctuary, a combined protected area of 56 square miles about 100 miles from the Texas coast.

A follow-up research cruise in August indicated the localized nature of the event. The sanctuary’s science staff have been unable to do additional on-site work but expect to resume research cruises soon.

“We are saying it is probably not a single cause, but a combination of stressors,” Johnston says. Gaps in data about the event exist, but known conditions include depressed surface salinity, depressed levels of dissolved oxygen at depth and elevated seawater temperatures.

Some of the conditions are consistent with researchers’ conclusions about climate change. Extreme rainfall and flooding, which they say are increasing in a changing climate, occurred in basins of the Mississippi River and several Texas rivers in months prior to the die-off. 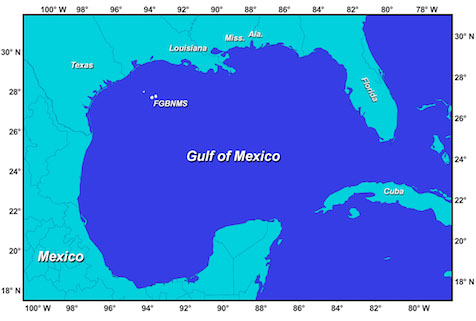 The Flower Garden Banks National Marine Sanctuary protects coral reefs that grow atop geological formations called salt domes rising from the Gulf of Mexico floor. Its three banks, the East, West and Stetson, contain more than 20 species of coral and hundreds of species of invertebrates and fish, including some 20 different sharks and rays. Thanks to their protected status and remote location, roughly 100 miles from shore, the reefs remain healthier than most in the Caribbean. Worldwide, coral reefs support at least a quarter of all marine life as well as commercial and recreational fishing and tourism industries, and protect coastlines from storms, waves and erosion — services altogether worth more than $2 trillion per year.

In Texas, a storm April 16 and 17, 2016 dropped more than 16 inches in the Houston area, creating major flooding on the Colorado and Navidad Rivers and Spring and Cypress Creeks. Almost eight inches of rain triggered flash flooding in Palestine on April 29. Ten to 20 inches fell May 26-27 along a swath from southeast Austin to northern Houston, including 20.50 inches east of Brenham. The Brazos River reached record levels at Richmond June 2.

All that river water eventually ended up in the Gulf, where it spread out and floated atop heavier seawater. River runoff dilutes salinity of Gulf waters, contains sediment that blocks sunlight corals need, and can carry nutrients that feed algal blooms and create areas of hypoxia, or extremely low oxygen.

While participants in the hunt for causes agree low dissolved oxygen was likely a main contributor to the event, they stress that clear links have yet to be determined between conditions on the sanctuary reef and the low oxygen levels. Existing data confirm low surface salinity and water temperature that was higher than average on and around the reef near the time of the event. Unusually high levels of freshwater outflow from Gulf Coast rivers were also measured.

Ship monitoring data revealed little or no vessel traffic in the vicinity just before the mortality event, and analyses also indicated no hydrocarbons in the area, effectively ruling out discharge of pollutants or petroleum-based contamination as the culprit.

On Oct. 5, 2016, scientists documented an unrelated coral bleaching event affecting nearly 50 percent of coral colonies in an East Bank study site. “Bleaching” refers to a response by corals to stress, in which the vibrantly hued organisms appear white.

Many of those affected in the October episode were types that normally resist early stage bleaching, but could have been weakened by whatever caused the mortality event a couple of months earlier. Sea surface temperatures above 30 degrees C (86 degrees F) for 85 days represented one of the worst bleaching events recorded at the sanctuary.

Future mortality events remain a distinct possibility at the Flower Gardens. Hurricane Harvey brought catastrophic rainfall to Texas a year after the 2016 event, its 50-plus inches made worse by manmade climate change. A study published in January in the journal Science Advances projects climate-change-fueled increases in riverine flooding in North America during the next 25 years.

This “new normal” highlights the need for additional scientific monitoring in the Gulf of Mexico to close those data gaps that persist with regard to the 2016 mortality event. It also makes a case for protection of additional coral reef banks to help make these ecosystems more resilient.

The National Oceanic and Atmospheric Administration proposed a expansion of the Flower Gardens sanctuary in February 2015, and moved forward on the proposal until it was put on hold by an executive order last April requiring a full accounting of an area’s energy potential prior to an expansion.

Melissa Gaskill, a contributing editor of Texas Climate News, is an independent journalist in Austin.