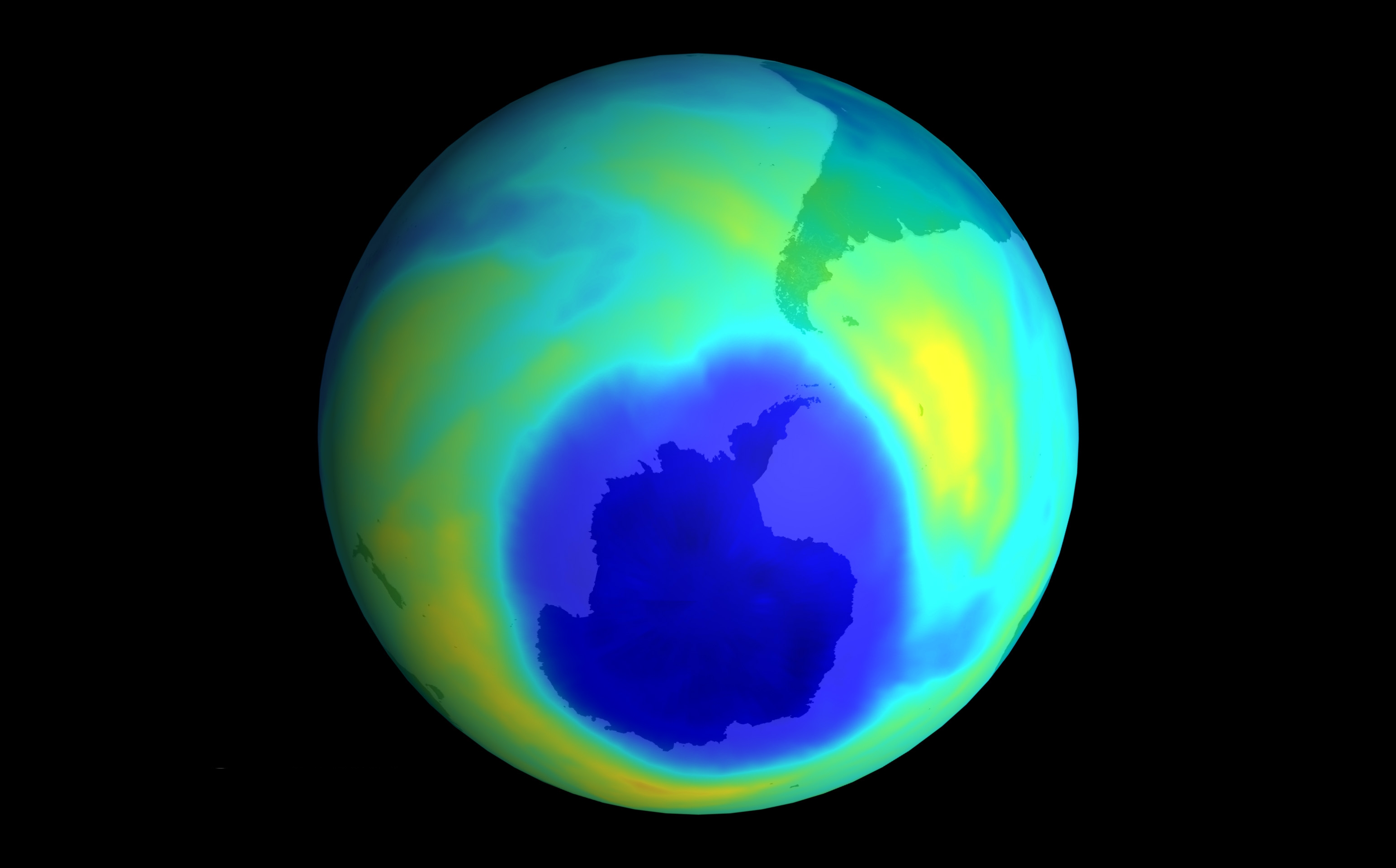 This NASA image shows the ozone hole over Antarctic in 2001.

The earth’s protective ozone layer is not recovering uniformly from the damage caused to it by industry and other human activities. And scientists are not sure why it isn’t.

An international research team says the ozone layer, which protects humans and other species from harmful ultraviolet radiation, is continuing to recover at the poles. But recovery at lower latitudes, where far more people live, is not.

The layer has been declining since the 1970s because of the effect of man-made chemicals, chiefly chlorofluorocarbons (CFCs) and similar gases, used mainly in refrigerants and aerosols.

There is a link between ozone depletion and global warming, though they are different and neither is the main cause of the other. Some suggested CFC replacements themselves proved to be powerful greenhouse gases.

CFCs and the other ozone-depleting gases were banned under an international agreement, the Montreal Protocol, and since then parts of the layer have been recovering, particularly at the poles.

But the latest research, published in the journal Atmospheric Chemistry and Physics, finds that the bottom part of the ozone layer at more populated latitudes is not recovering, for reasons so far unidentified.

Ozone forms in the stratosphere, between about 10 and 50 kilometers above the Earth and above the troposphere where terrestrial species live. Much of it is in the lower part of the stratosphere, where it absorbs UV radiation from the sun, which can damage DNA in plants, animals and humans if it reaches the earth’s surface.

So the discovery in the 1970s that CFCs were destroying the ozone layer and causing the Antarctic ozone “hole” sparked rare international co-operation to solve the problem.

The outcome was the 1987 Montreal Protocol, the phase-out of CFCs, and, recently, the first signs of recovery in the Antarctic. The upper stratosphere at lower latitudes is also showing clear signs of recovery.

Jonathan Shanklin, one of the British Antarctic Survey (BAS) scientists who discovered the ozone hole in 1985, told the Climate News Network from the BAS Halley research station where he is working now:

“…This new research is interesting and provides a novel perspective on changes in the ozone layer. It shows that even in an area of science that is fairly well understood there are still surprises in the fine detail.

“It is clear from Antarctic data that the ozone layer is beginning to recover where it was worst affected, though it will take many more decades before it is back to its condition of the 1970s.

Anna Jones, senior tropospheric chemist at BAS, said: “We do not yet understand what’s causing the decline. To enable predictions of future ozone amounts, and to identify whether (and what) action might be needed to prevent further decreases, it is extremely important to understand what is causing the observed downward trend.”

Joanna Haigh, co-director of the Grantham Institute for Climate Change and the Environment at Imperial College London, is co-author of the study. She said ozone had been declining seriously since the 1980s, but while the banning of CFCs was leading to a recovery at the poles, this did not appear to be true for the lower latitudes.

“The potential for harm in lower latitudes may actually be worse than at the poles,” she said. “The decreases in ozone are less than we saw at the poles before the Montreal Protocol was enacted, but UV radiation is more intense in these regions and more people live there.”

Although they’re not certain what’s causing this decline, the authors suggest two possibilities. One is that climate change, fueled by global warming, is altering the pattern of atmospheric circulation, causing more ozone to be carried away from the tropics.

The other is that very short-lived substances (VSLSs), which contain chlorine and bromine, could be destroying ozone in the lower stratosphere. VSLSs include chemicals used as solvents, paint strippers, and as degreasing agents. One is even used in the production of an ozone-friendly replacement for CFCs.

Scientists had thought that VSLSs would not persist long enough in the atmosphere to reach the stratosphere and affect ozone. But William Ball from ETH Zurich, who led the analysis, said: “The finding of declining low-latitude ozone is surprising, since our current best atmospheric circulation models do not predict this effect. Very short-lived substances could be the missing factor in these models.”

The study was the work of researchers from Switzerland, the U.K., the U.S., Sweden, Canada and Finland, and included data from satellite missions, including by NASA.